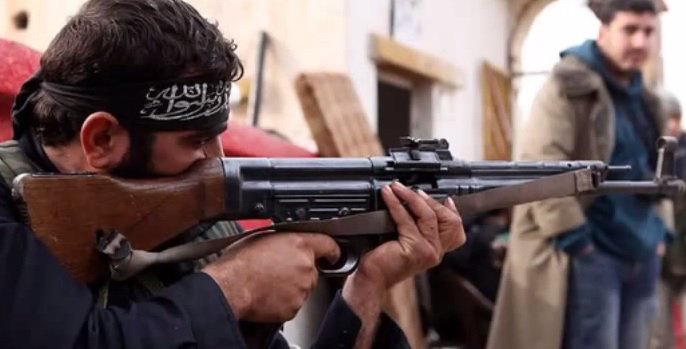 The war in Syria has been waging for several years now, and as usual, the U.S. has gotten itself muddled into it. The war is a confusing one that features ISIS, Syrian rebels, the Syrian Arab Army, the Syrian Democratic forces, Russian mercenaries, and a variety of U.S. personnel. I’m not an expert on the war, but I am an expert in weird weapons. Well, not an expert, but a gleeful observationist.

What I’ve found fascinating is the completely bizarre variety of firearms that have found their way to the war in Syria. We expect to see Soviet small arms, domestically produced Middle Eastern firearms, and some U.S.-made guns. We’ve seen that, but we’ve also seen a variety of weird weapons pop up in the hands of a wide variety of Syrian forces. Some are historical, some are utterly random, and some reek of some kind of criminal element bringing guns into the country.

I’ve found what I think are the top five Weird Weapons in Syria. 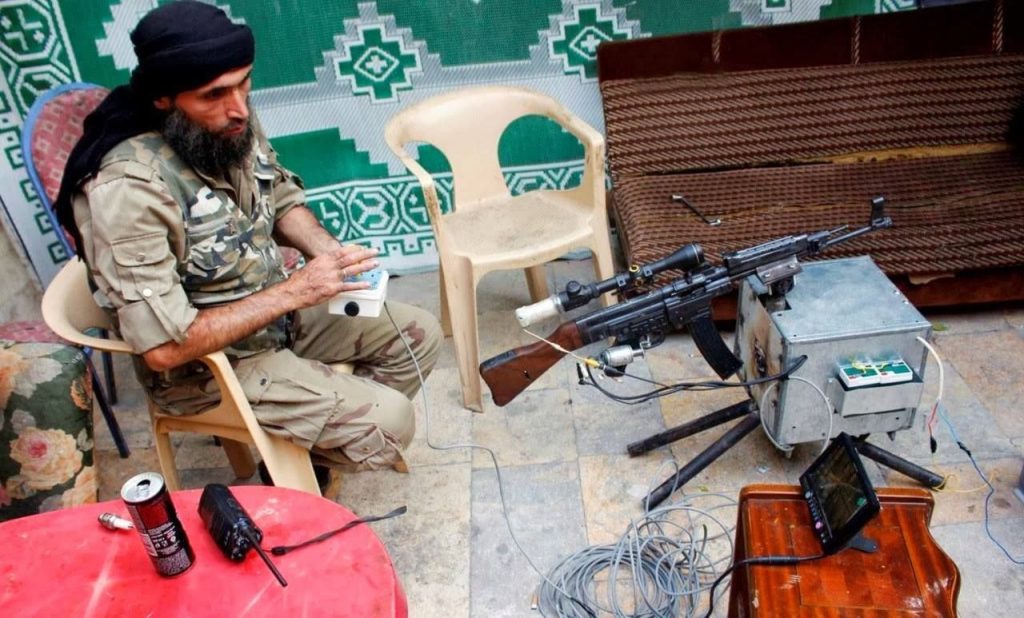 The FSA found crates of them in a Syrian Arab Army Depot and quickly put them into use. They must have found some 7.92x33mm ammo among the guns because they have been used by troops on the ground, rigged to remote firing stations, and beyond.

The STG 44 inspired the AK 47 and is largely considered the world’s first successful assault rifle. These select-fire rifles are somewhat compact, fed from a curved 30 round magazine. While it’s dated, it’s maybe only a step away from the AK 47’s usefulness. How these relics got to Syria in the first place is curious, but I imagine they’ve been there since shortly after the end of World War II.

The Steyr AUG is one of my favorite bullpup rifles. It’s an old-school model and has been utilized widely by European forces and even Homeland Security. The Steyr AUG popping up in Syria is a fascinating development. The examples found in Syria had serial numbers removed, so tracking them could be near impossible. 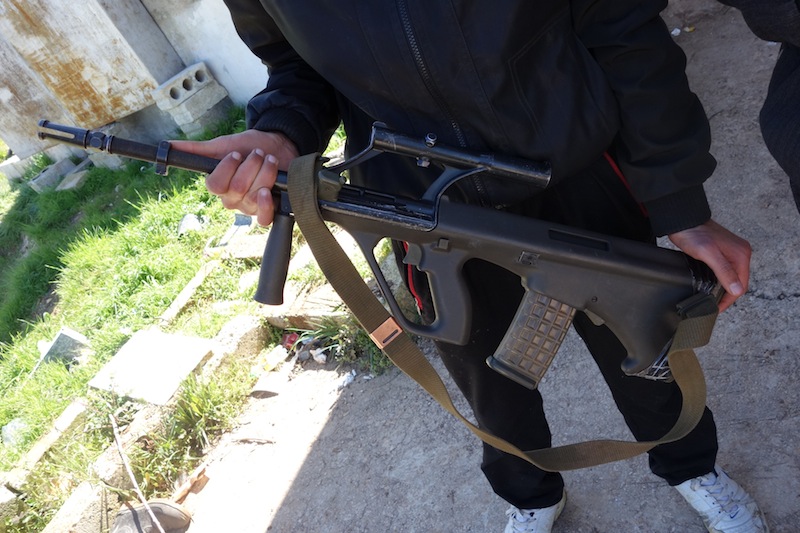 The Steyr AUG comes from Austria, which in the modern age vigorously combats leaking weapons into criminal hands. As a part of western Europe, they tend to be selective of who can purchase firearms and aren’t going to be selling firearms to the Free Syrian Army or to Assad.

As a rifle, it’s a damn fine one, but in a western setting, it’s still part of the weird weapons category. It’s a bullpup; it uses tons of polymer, often has a built-in optic, and generally gives those retro-future vibes.

You thought the oldest of our weird weapons would be the STG 44, huh? Well, you’d be wrong, since mother truckin Vickers guns have been seen in the Syrian conflict. The Vickers gun was first made in 1912 and saw massive use in World War 1. The Vickers clung around for decades after the first World War. 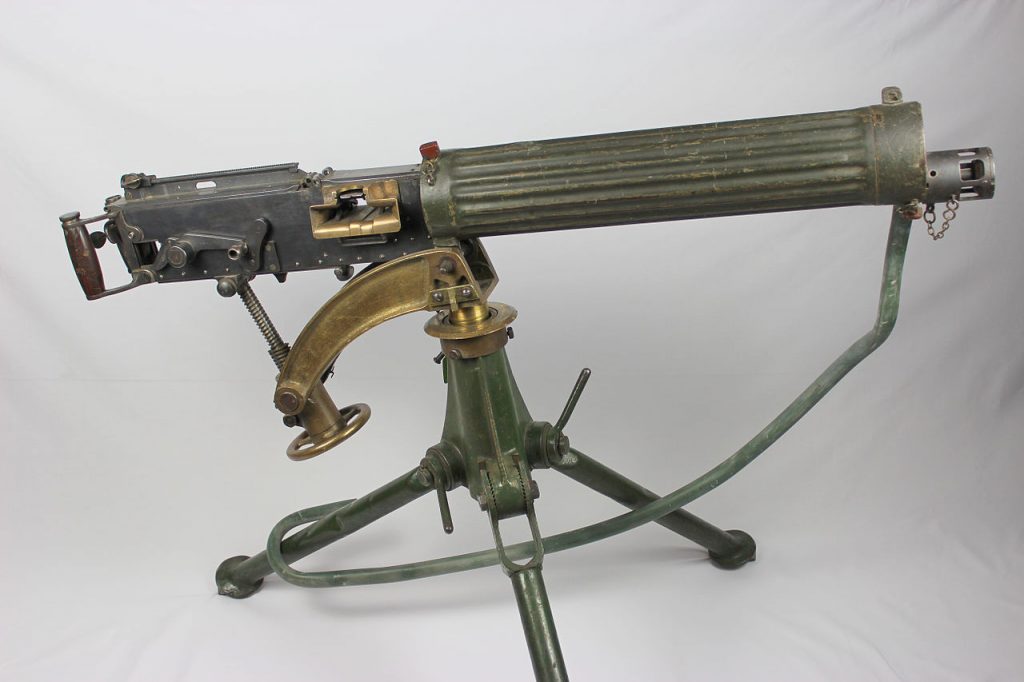 The Vickers Machine gun has been chambered in a wide variety of calibers, including the .303 British, .30-06, 11mm Vickers, and many more. The gun likely found its way to Syria during the numerous European expeditions into the Middle East. There are dozens of different conflicts, expeditions, and wars in which a Vickers could’ve landed in Syria.

The Vickers Machine Gun came from the days when medium machine guns weighed 50 pounds and used water jackets to keep the barrels cool. These tripod-only guns are not great for maneuver warfare, but when you’re involved in a civil war in Syria, you take what you can get.

Don’t call it an AK! Those cheeky Czechs were forced into the Warsaw Pact but didn’t want the AK. Instead, they made the VZ 58, which admittedly resembles the AK series of rifles, and even utilizes the same caliber as the 47 series AK. However, other than that, it doesn’t have much in common with an AK.

The ole 58 is a weird weapon. It’s one of the rare assault rifles to use a gas-operated falling breech block system to function and fire. The VZ 58 has proven itself to be a damn fine rifle. Unlike the AK, it’s not a widespread rifle. No one seems to know how the VZ 58 got to Syria, but they see action.

While they might use proprietary magazines, the VZ 58s use the common 7.62x39mm round. It helps logistically for forces full of 7.62×39 ammunition. The VZ 58 is another one of the mysterious origin weird weapons that have drifted into ancient Syria.

Is China doing shady things in different parts of the world? Say it isn’t so! This article could be all Chinese weapons because there seem to be lots of them in Syria. From M16 clones to the big ole W85. The W85 makes the list because it’s oddly common in Syria. It’s a heavy, 50 caliber machine gun that is essentially a modernized version of the Russian DShK. 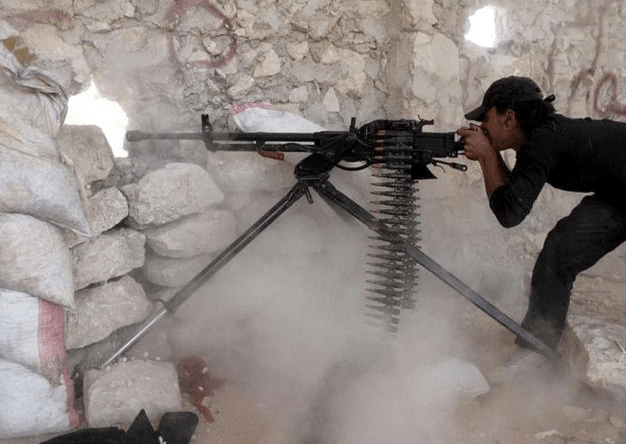 The W85 seems to be more common than an actual Russian DShK in Syria. As far as weird weapons go, their presence is weird, but their commonality is perhaps weirder. It’s a mighty powerful weapon. Syrians mount them on technicals, on tripods, and just randomly mounted to walls.

The W85 provides the Free Syrian Army a lot of firepower. It can defeat most light armored vehicles and lay down hate at extremely long ranges. A lot of these battles are in urban environments, and the W85 allows Syrians to eliminate the prospect of cover for most soldiers.

This is five of a massive list of weapons we’ve seen in the Syrian civil war and only encapsulates the small arms of Syria. We aren’t even looking at the presence of a British tank, U.S. TOW launchers and missiles, and Nazi Germany anti-air guns. This conflict seems to be a bizarre combination of weird weapons, varied belligerents, and brutal battles.

Editor’s Note: Our own civil war, a binary conflict, has jaded us to what a civil war should look like. Many are confused that there are more than two sides, more than two main teams. We also discount the facts that the major world players of the day participated in our civil war the way powers today are meddling in Syria and elsewhere. We pretend that a global economy and a global society are new, but they are not. The speed of information and personnel movements are, but not the worldwide meddling. That’s older than the 13 colonies.