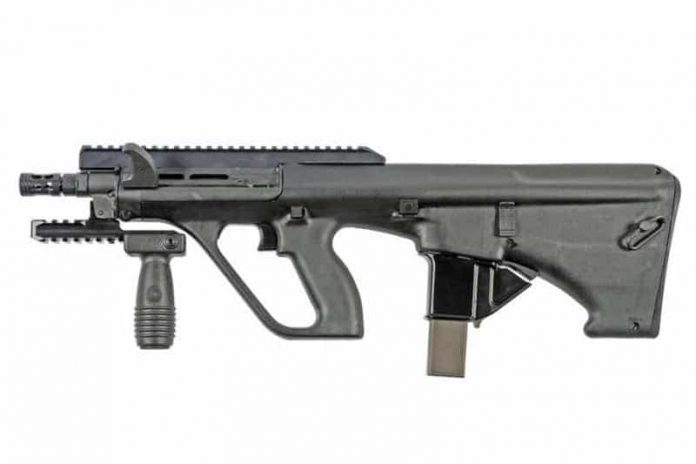 The Steyr AUG rifle was the first “modular” design: the barrel, receiver, firing mechanism can all be changed to configure the weapon into whatever sort of rifle is wanted. By an extension of this principle, Steyr pioneered a trend which is now becoming more common, of converting what is basically a locked-breech rifle into a blowback submachine gun.

The Steyr AUG 9 Para is based on the standard AUG rifle by changing the barrel for one of 9 mm caliber; changing the bolt assembly for a simple blowback unit; and changing the magazine housing by fitting an adapter to take a narrower magazine holding the 9 mm Parabellum pistol cartridge.

The result is a submachine gun with a longer barrel than normal for this type of weapon, and one which fires from a closed bolt. Both these features improve accuracy, and the longer barrel produces a rather higher muzzle velocity than is usual in this caliber.

The “closed bolt” feature means that when the magazine is inserted and the cocking handle pulled back and released, the bolt runs forward and chambers a cartridge, leaving the hammer cocked ready to fire. On pulling the trigger in the usual type of submachine gun, the bolt runs forward, loads the chamber and then fires. There is, therefore, a sudden shift of balance due to the movement of the bolt and, as a result, a first-round hit is unlikely. With the AUG 9 Para, pulling the trigger simply releases the hammer; nothing else moves and the weapon stays steady at the aim so that first-round hits are the rule rather than the exception.

The company originally marketed a conversion kit, allowing anyone with an AUG to convert it to a submachine gun. Later, however, this was withdrawn and only brand-new weapons were sold, since it appeared that even a simple conversion was beyond the skill of some users.

A separate barrel fitted with an efficient silencer is also available; this can be exchanged for the normal barrel by simply pressing a catch and twisting the front handle sideways to unlock the interrupted lugs of the barrel from the receiver. As with the rifle, the basic model has a carrying handle with a low-power optical sight, but it is possible to change the receiver to one with a sight mount and thus fit night vision or other specialist sights.

This article in its original format can be found at GATDaily.Com