Concealed carry the enthusiasts looking to merge their workout wear into the concealed carry lifestyle may find the road to getting ripped a little daunting, but it doesn’t have to be. The holster and gear market caters to athletes in need of safety and protection while working out with a bevy of options to aid in your mission to get fit. With so many options, though, which one should you choose? No worries, Guns.com has done the heavy lifting, creating a sampling of five concealed carry holsters designed for healthier fit lifestyle.

Smart Carry created a holster designed specifically for those heading out for a jog. Constructed from denim, the Smart Carry Holster opts for a unique take on belt-free holsters. Featuring a firearm pocket and spare mag holder, I used my Smith & Wesson M&P9 Shield to place the gun centerline on the body as the company suggests. The Smart Carry definitely feels more familiar for those of us appendix carry fans.

The firearm and magazine pockets opt for an open design – meaning no retention strap or compression fabric to keep items in the pocket. This isn’t the holster you want to test your yoga or gymnastic moves with but for running or jogging the Smart Carry adequately retains the firearm. I highly suggest sticking to the treadmill, sidewalks or running trails with this model. Like similar belly band style holsters, the Smart Carry features a band that extends out from the firearm pocket, wrapping around the wearer’s hips and securing it to the concealed carrier with hook-and loop. Sizing is important with this holster, to prevent slipping. It does maintain its position fairly well during exercise, remaining centerline during workouts.

While the Smart Carry brings a different approach to the exercise dilemma, I found it bulkier than the other holsters I tried. I tend to wear less fitted, more loose workout shorts so this didn’t interfere with my athletic wear but if you dress in more fitted workout wear, this holster might not be the one for you. For runners and joggers looking for an easy means to carry on short jaunts around the neighborhood, the Smart Carry holster — offered for $60 — is a decent option.

2. Can Can Concealment Classic Hip Hugger — $69

Can Can Concealment’s Classic Hip Hugger holster isn’t billed as workout wear, but it does the job so well you might think it was created solely for that purpose. Bringing a belly band style to the table, the Classic Hip Hugger uses military-grade elastic and four firearm pockets to secure as many guns as you reasonably think you can carry while exercising. Add in two spare pockets for accessories and the Can Can Classic Hip Hugger proves why it’s earned a place on this list.

Though it adopts a belly band look, the Classic Hip Hugger rests lower than a traditional band, riding on the hips and giving it more to grab onto. Using compression as a means to stay in place, the Hip Hugger also employs a rubbery lining that grips skin and ensures little to no movement. The elastic itself is thick which means that despite no trigger guard, the trigger cannot be engaged through the fabric. It’s worth noting, though, that elastic does wear over time so checking gear regularly to ensure rigidity and integrity is essential. The firearm pockets on the Classic model accommodate most sub-compacts and I routinely carry my Smith & Wesson Shield in the front, AIWB pocket of this holster. Each firearm pocket is outfitted with re-holstering tabs which allow the wearer to pull the pocket open and avoid flagging fingers when inserting the firearm – a bonus for a fabric style holster. Additionally, the Hip Hugger sports three rows of hook and eye fasteners allowing for flexibility in terms of sizing.

The Can Can Concealment Classic Hip Hugger is not designed for workout but it does a great job concealing and retaining the pistol. (Photo: Jacki Billings/Guns.com)

As with any system, however, the Classic Hip Hugger requires some sacrifices — mainly by way of comfort. The thick elastic is great for controlling the holster and keeping the gun in place, but it means this rig gets hot. If you live in a steamy, humid climate or just tend to get overly hot and sweaty while working out, you might find this holster increases those temps to an uncomfortable level.

Crossbreed Holsters elevates its holster creation with a modular model designed for belly band lovers. The Modular Belly Band sees the superhero-esque team-up of Kydex and elastic. Boasting a molded shell, the Crossbreed Belly Band is precisely cut to each firearm make and model. Offering swatches of hook and loop along the band, the Modular Belly Band pairs with the Kydex shell to ensure the handgun is safely nestled within the holster. The hook-and-loop design also means there’s room to add accessories if you choose to purchase some through Crossbreed.

The advantage to the Crossbreed Modular design is the ability to place it where you want it — it works nearly anywhere you put it. I prefer to wear mine lower around my hips, but it works just as well higher on the waistline. The belly band construction and hook-and-loop material around the band also offer gun owners greater levels of utility. You can place it in AIWB, strong side IWB or behind the hip. The options are nearly limitless. Due to its versatility, the Modular Belly Band allowed me to carry in my usual EDC set-up — a Glock 19 in AIWB — offering more consistency between my regular carry and workout carry.

Despite adding a layer of safety and options with its construction, the Modular Belly Band suffers the same pitfalls as many belly band style holsters in that there’s nothing keeping it secured to the body other than hook-and-loop. The consequence of this? The belly band rides up or moves during excessive movement and will often slide up on the draw. Is this a deal breaker? No. Certainly not when factoring in what you get with this platform, but you’d be wise to practice not only drawing from this rig but also re-holstering. Understanding where the belly band naturally moves will better prepare you in the event you need your firearm.

Coming in at $55, the Crossbreed Belly Band brings a true modular model to this holster list, granting concealed carriers the most amount of control.

UnderTech UnderCover blends holsters and concealed carry wear into one package with its Compression Shorts. Offering a deep concealment option to athletes on the go, the Compression Shorts pair a breathable, moisture wicking material with integrated holsters in the 5 o’clock position on both the left and right side. The holster pockets use a thick elastic that offer compression as a means to retain the firearm — in my case, a Smith & Wesson M&P9 Shield. There’s no retention strap here to impede the draw and the elastic does an adequate job of keeping the gun in place.

Though the holster pocket is swathed in fabric with no trigger guard whatsoever, the elastic proves thick enough to prevent the trigger from being engaged through the material. The downside to this platform, though, is there are no tabs to help with re-holstering. In order to get the gun back in the holster you are certainly going to flag your fingers, so patience is key to ensure safety.

If the idea of wearing shorts underneath shorts seems a bit too much to handle, Alexo Athletica offers an all-in-one package for concealed carriers. Opting for an integrated holster design, the Carry Runners by Alexo Athletica repackages its successful carry leggings design into smaller, breathable shorts with the concept of exercise in mind. The Carry Runners feature seven total pockets built into the waistband, allowing women to pack guns, gear and other accessories on their jog.

Sorry, fellas, the Carry Runners are created with women in mind, though if you’re a fan of short-shorts, I’m sure you could make these work. The Carry Runners deliver a breathable, lightweight fabric around the legs paired to a compression style top section that offers the added benefit of smoothing the tummy area. Holster pockets are positioned in the appendix position as well as behind the hip, providing some flexibility in terms of carry.

The holster pockets are fabric, so they add no weight or bulk to the design, but this also means the gun and subsequent trigger rests unguarded in the holster. A work-around for this flaw rests in the spare pocket ahead of the holster compartment. Stowing a concealed carry permit or ID in this forward pocket creates a sort-of makeshift trigger guard. While this works in a pinch, it’s less than ideal as it places the burden of safety onto the concealed carrier and relies on memory. For busy moms, this extra step may end up overlooked. Nevertheless, if you are a single gal looking to use these for the singular purpose of running or jogging, the Carry Runners hold up to the task.

The holster pocket is smaller, meaning carriers are relegated to micro guns like the Sig P238; however, these shorts do the job and do them well. Though they don’t feature a retention strap, the compression is adequate enough to keep the gun in place. I was able to run and jump in these, without the P238 so much as moving an inch. The Carry Runners, priced at $72, prove useful to exercise enthusiasts looking to stay safe while getting swoll.

Working out and carrying doesn’t have to be a burden. With the right gear and right placement, gun owners can stay safe while getting fit. Those these aren’t the only options on the market, hopefully our list can get you started down the path of a healthier, safer lifestyle. 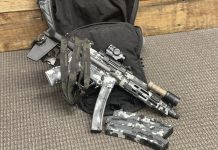