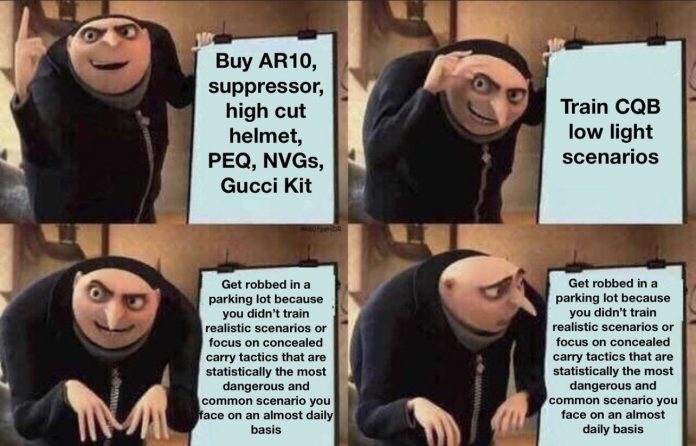 I am guilty of this sin too, but I recognize it and work to correct it. This stems off the prepping conversation Caleb and I had over on Gunday Brunch.

What scenario are you prepping for?

The raid on the Bin Laden compound?

The apocalyptical end of civilization because of [Insert Favorite War, Monster, and/or Alien Here]?

The 2AM/2PM kick in the door at home?

Or the belligerent at the StopN’Rob gas station/convenience store?

Two of those scenarios have realistic odds of occurring, to a point where they warrant serious consideration, preplanning, and preparatory action. The other two are science fiction and urban mil-sim fantasy.

Granted, that very fact makes those two very fun to “train” for… however, being good at clearing room to room in a team or squad format with nightvision on isn’t super helpful when the task before you is ‘shoot the carjacker pulling you out of your car at knife point by the gas pump, while your toddler is strapped into their carseat in the back.

I am well aware that isn’t the ‘fun’ scenario. Training should have fun elements. But we add the human tendency to get very lost in something we enjoy and we can defeat some of, even much of, the purpose of training.

Another subset of the same phenomenon is trying to progress to the ‘advanced’ level before understanding what that is. Most instructors of ‘advanced’ training will tell you (once you get to the course and you are invested) that there is no advanced training…

What!? I want my money back!

No, you don’t. Because what you want isn’t advanced training, it is training in the proper and integrated fundamentals of shooting, moving, and using your equipment properly.

No single element of those is very hard. But missing one of those elements makes tasks that require them extremely hard. So good instructors instead look at where students are strong in the fundamentals and where they are weak. They work to improve the weak points until those skills are at a level where they can integrate with other skills.

Thus, that stairwell. Students often see the promo video of the SWAT/SF/Direct Action Coolios using the integrated skills in an applied way (or even more often, just a well choreographed shot to showcase the application.. because marketing) and they want to do that.

Many of these students, regardless of background or professional involvement in shooting where carrying a gun is part of your job and you have more than the average concealed carrier’s investment and liability if you pull the trigger, do not have a good grasp on which fundamentals they need to polish… or sometimes all the fundamentals which were neglected starting the moment they passed whatever ‘qualification’ standard they needed to meet.

A ‘qualified’ patrol officer probably can’t shoot well enough to clear that third step, taking a random one off the street, and probably have deficiencies in steps one and two. Your average state CCW/CPL holder has taken enough time and training, assuming a quality instructor and program, to be comfortably learning the first step, but no further.

But… that officer has probably been shown and taught, at least in an introductory fashion, all of those steps. A CCW holder, depending upon the course, instructor, and round count, may have been taught things on all of those steps except the final one.

This introductory familiarization, especially if not properly contextualized, can too easily create a false sense of competency when in reality there is only a passing familiarization with the concept. We see this constantly in internet discussion where someone who has learned of a concept then parrots it verbatim without being able to contextualize around that concept.

Dude Almost-Joined McBroVet says 5.56x45mm is a great CQB round. He is correct. But he has no clue why. When challenged on it he’ll respond with answers like ‘SWAT uses it’ or ‘The SEALs’ or something invoking the expertise of use. It’s the appeal to expertise, using someone to make their point for them.

Why is the HK416 superior to all other ARs ever? St. Larry Vickers said so and he was Delta Force, my dudes. Appeal to authority argument. Not getting into the development and evolution of the 416, which Larry himself does, and why decisions were made. Even acknowledging the faults and limitations that exist in this advanced rifle and consulting with peers on their opinions.

None of that matters to McBroVet or his friend Prep ButDoItWrong. They are looking at highly unrealistic situations due to a fictional sense of dangers. For any number or reasons this may be the case but the end result is the same, they are preparing for the wrong fight. They are therefore more likely to lose the fight that comes and fail their family, their friends, and themselves to do the one thing they purport to want to do… survive.

Put in the right reps.

Running the CQB house with lasers, lights, NODs, suppressors, and so forth for various visible and passive aiming training and familiarization is fun. That’s why we want to do that.

100 dry reps drawing your EDC piece is more productive though. Unless your day (night) job involves raids with all that equipment then all you’re doing is a fun familiarization. Even when you’re good at it, it isn’t the practical emergency tool that being able to clear your cover garment and get your pistol out is.

So train according to need. But you don’t have to skip the fun stuff if you keep it in its proper context.