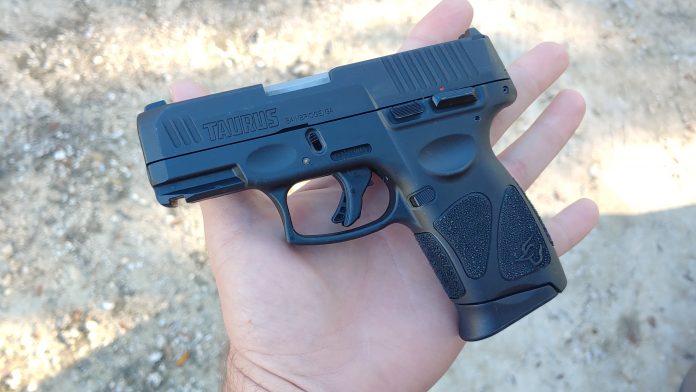 The Taurus G3 is the latest generation of Taurus pistols to premier across the firearms industry. The original G3 was the first entry, and it was a full-sized Glock 17 sized pistol. The latest model to grace the G3 line is the G3c. C, of course, stands for compact. The G3c is not Glock 19 sized or Glock 26 sized firearm, but sits somewhere in between. That’s not a bad thing. It’s smaller than most compacts but doesn’t feature the small stubby, three-finger grip of most subcompact firearms.

My own experience with Taurus is a bloody trail of broken firearms. Specifically, their revolvers. As a poor 21-year-old, I owned many a Taurus, and they mostly consisted of the revolver lines. This includes a Judge, a Model 85, the Polymer Model 85, a neat 45 Colt snub nose, and a medium frame 357 magnum. Each and everyone broke with little use or presented some odd problem. My luck with Taurus automatics has been much better.

The Taurus G3c is an evolution of the G2c and keeps right around the same size and weight. The G2c came in both 9mm and 40 S&W, but as of this writing, the G3c is only available in 9mm. 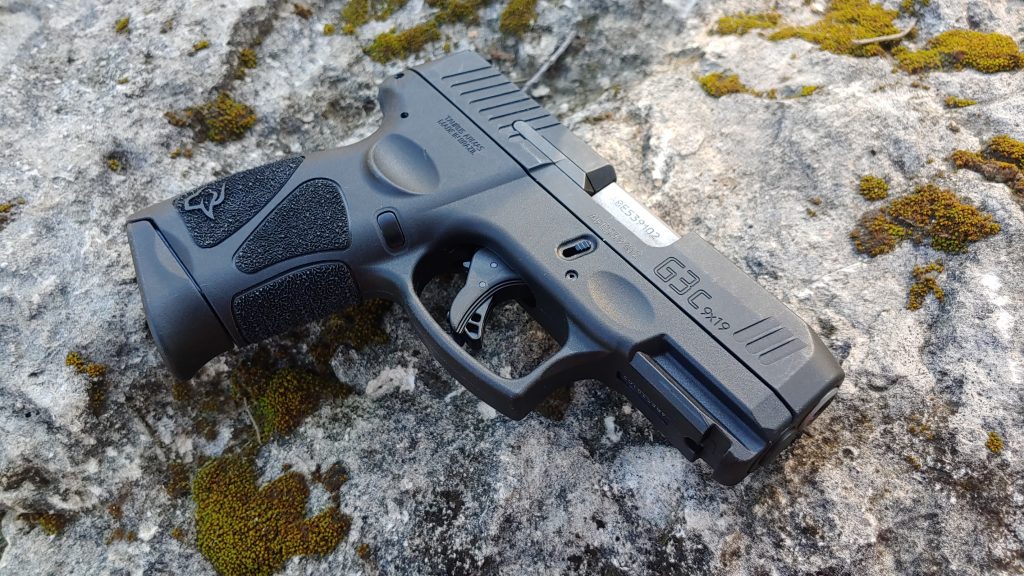 Compared to the competition, the gun is a little bigger than most subcompacts, but as mentioned above, that’s okay. The magazines each hold 12 rounds, and you do get three mags. It sounds like a Hellcat or P365 competitor, but it’s a good bit chunkier than either of those. Admittedly with the existence of both of those firearms, it’s hard to choose the G3c over either in most respects, except for the price. The G3c is selling online for 259.99, roughly half the price of either the P365 or Hellcat.

Features of the G3c

The G3c keeps the weirdish DA/SA trigger design that first premiered in the 24/7. This trigger system is referred to as a single action with double strike capability. The trigger works like a normal, partially cocked striker-fired design. Except if you pull the trigger and the round doesn’t ignite (or you’re dry firing), the trigger goes into double-action mode. So if a round fails to ignite, you can try again. There is no means to manually drop the gun into double-action mode besides a trigger press.

The sights are Glock compatible, which is nice because Glock sights are everywhere, and this makes them easy to upgrade. Your stock sights are actually metal sights, which gives them a point above Glock’s stock sights. Speaking of compatibility, the magazines are SIG P226 compatible. Another nice touch. 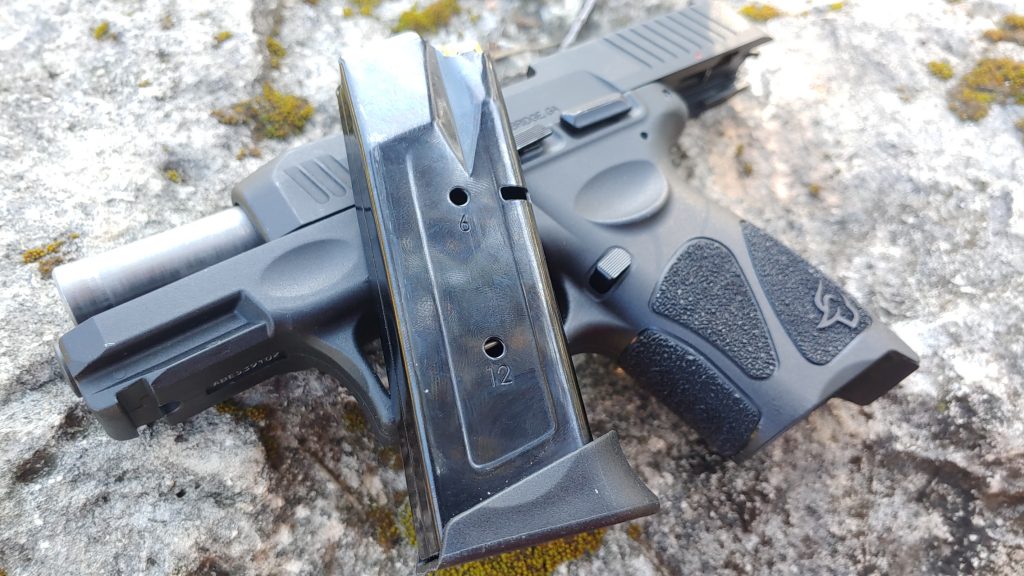 The G3c has a small Picatinny rail to accommodate accessories like the new Surefire or Streamlight mini lights. Also, a MantisX works with the rail, which is handy. There is a manual safety on top of a trigger dingus safety and front and rear slide serrations.

The G3c has a few good ideas with compatibility among popular platforms, and it’s a promising start.

I’m not a manual safety type, but the G3c isn’t a bad safety. It’s placed in a 1911ish position and requires a simple flip of the thumb to activate or defeat. The magazine release sticks out nice and far, almost as if it’s an aftermarket extended-release. The grip panels are nice and textured. They seem more aggressive than Taurus designs in the past. 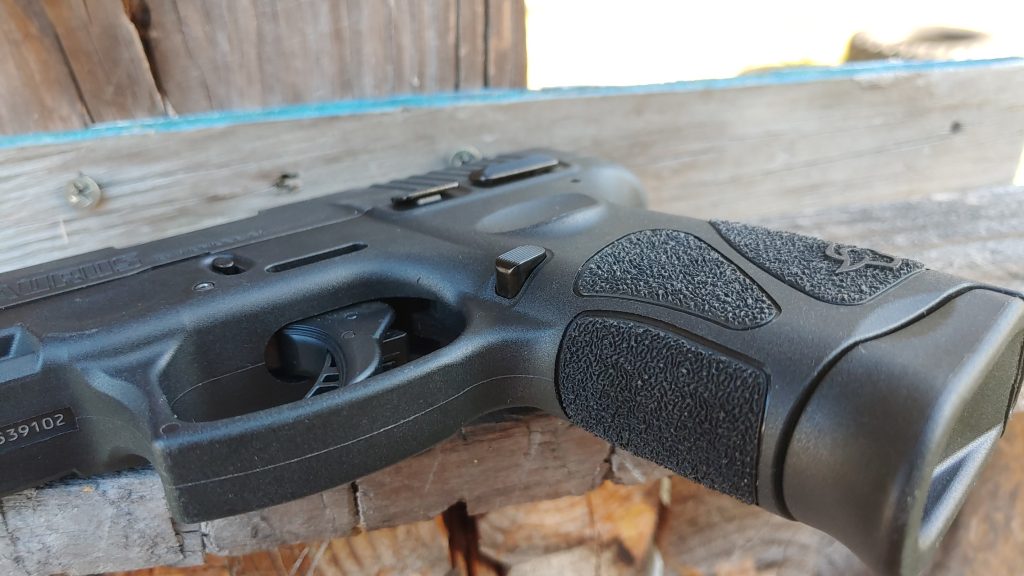 The grip is just long enough to accommodate my gorilla-sized hands, and I hate a hanging pinky, so points for that. The magazines all come with a pinky extension to make it so. The slide lock is useless in my gorilla hands. I find myself pinning it down and keeping the slide from locking to the rear with a thumbs forward grip. It’s my life, and it happens with most guns outside of CZs. 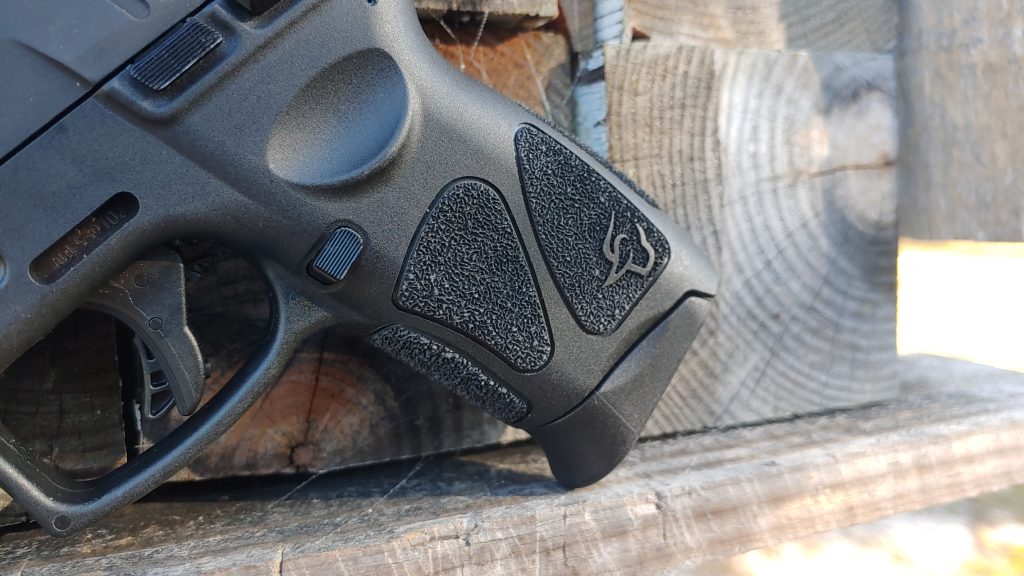 Ergonomically the gun is okay. It doesn’t blow minds, but the basics are done right. Well, almost right, because there is a big flaw in the grip, we’ll talk about in the next section.

Range Time with the G3c

Let’s start with the good. I like the sights a lot. The front sight is a standard white dot, and the rear sight is all black and textured to reduce glare. 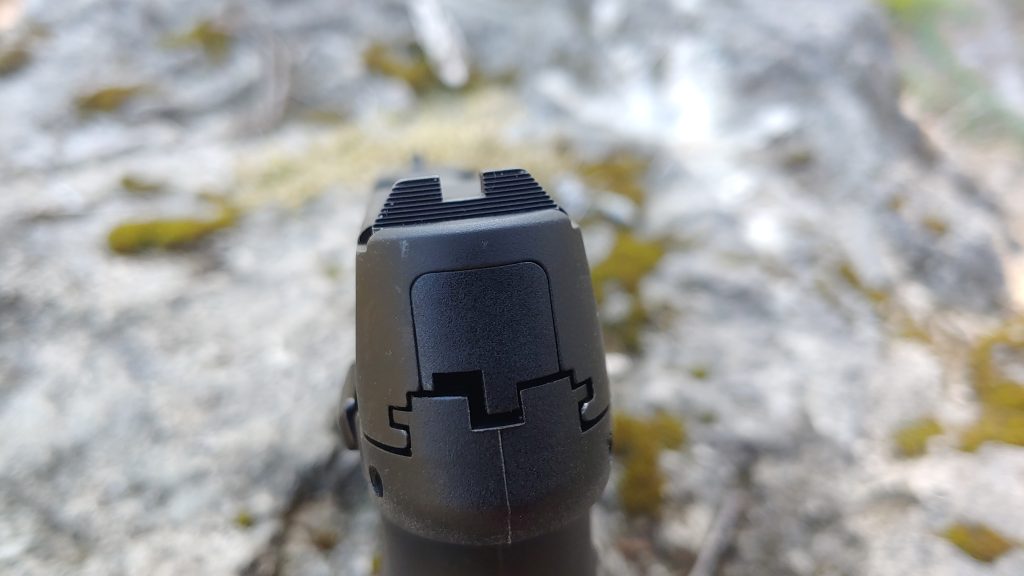 The contrast between the front and rear sight makes it quick and easy to get your focus on that front sight. 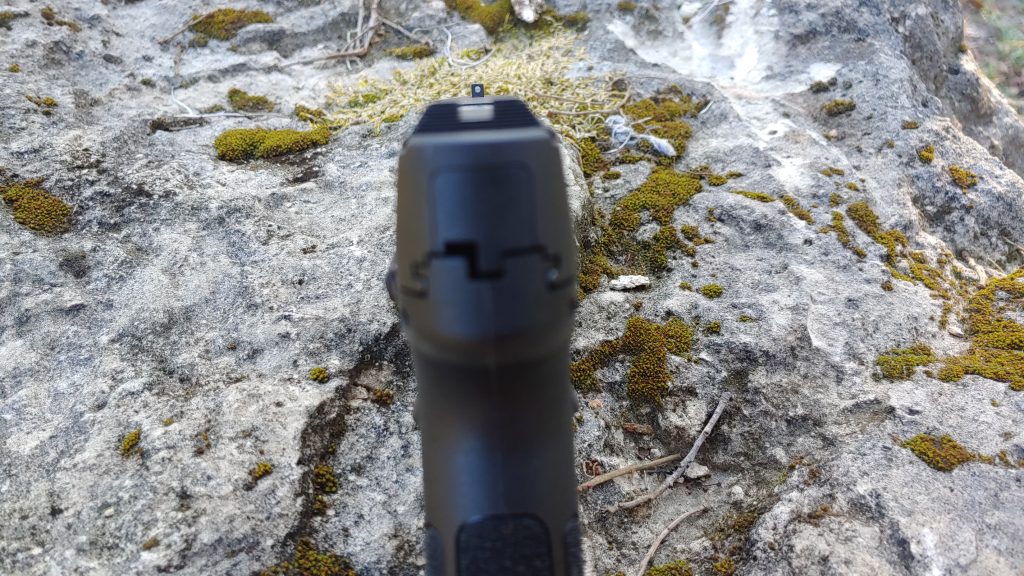 The grip and texture keep the weapon pinned in your hand, and it’s never trying to wrestle away from you throughout the recoil impulse. You can keep the gun on target and make accurate and fast follow up shots. Accuracy is perfectly acceptable for a small defensive pistol. Headshots at 25 yards are doable, and within 10 yards, you can punch out a Dot torture dot without breaking the circle.

Swapping mags is quick and efficient. The magazine release is a highlight ergonomically. 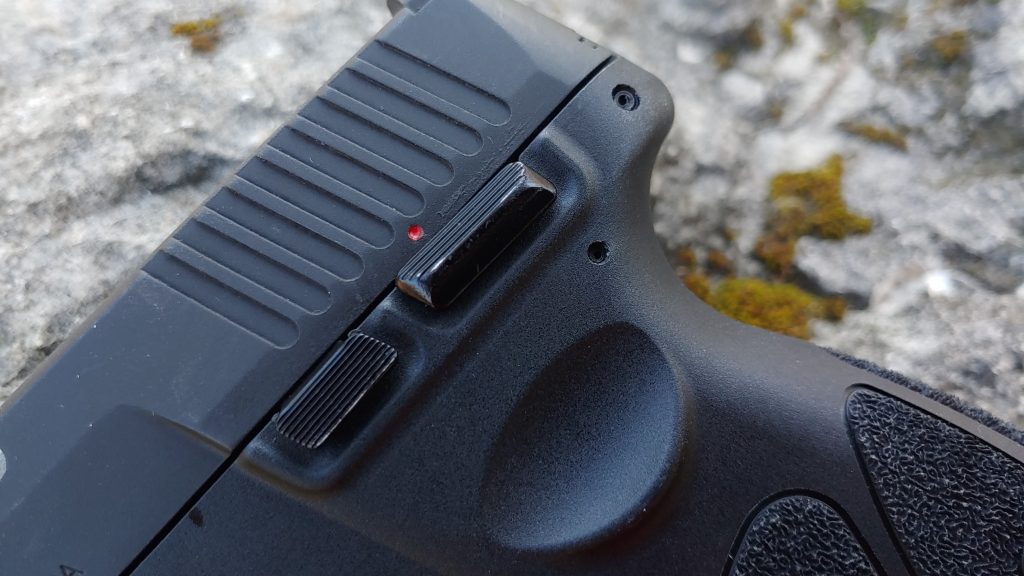 The average is almost everything else. The trigger is kinda okay. It’s not heavy, but the single-action pull is the same length as the double action, just a bit lighter. The trigger is gritty along the way and feels like plastic rubbing on plastic. It’s not bad enough to compromise accuracy, but the difference between the G3c and a SIG is evident. 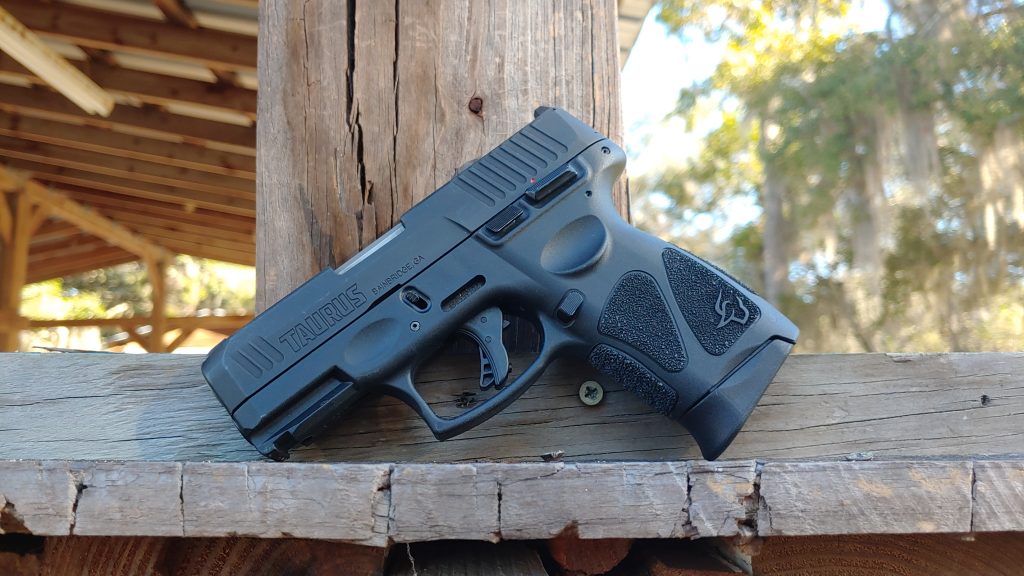 Reliability wise I ran into one problem with one magazine. The follower failed to rise and feed the next round. The problem was solved with a quick hit to the bottom of the mag. I’ve had this problem with Taurus automatics before. It’s isolated to this one magazine, which I benched and later cleaned well. It seemed to sort that issue out. 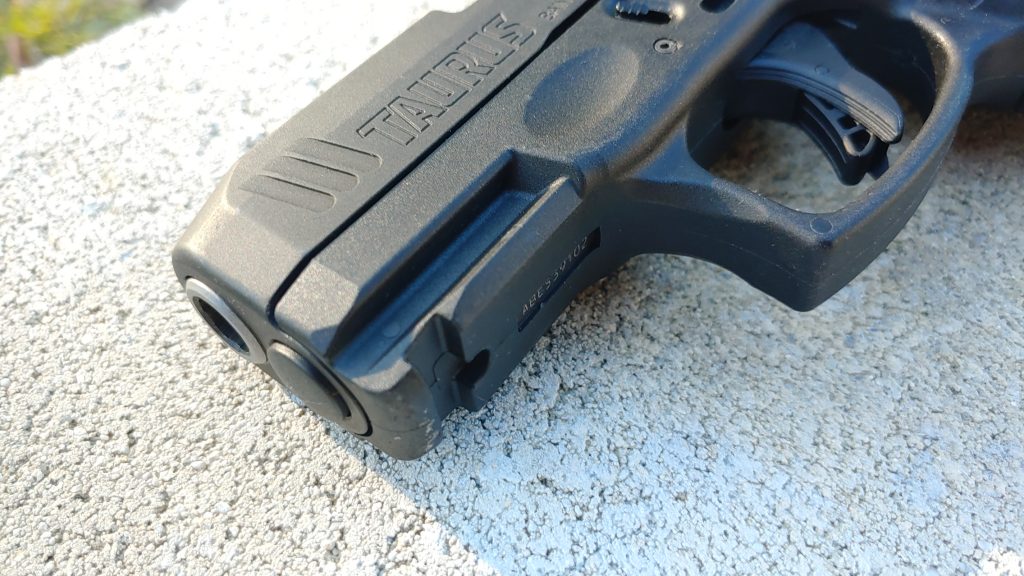 Other than that, the gun gave no issues extracting, ejecting and cycling.

The bad is the way the slide bites my hand with every single shot. It gets to the point where the gun is drawing blood and giving me a recoil and slide bit induced flinch. I’ve mentioned my Gorilla like hands a few times already, and for better reference, I wear a 2XL glove. This is likely why I’m getting my hand beat to hell, and I’ve seen others shoot the gun without any issues.

The G3c is an okay pistol. I don’t love it, but it’s not a categorically bad pistol. At the 259 price point, I can see its appeal. My main concern would be reliability; even if an issue is solved, I tend to be spooked. I’m not superstitious; I’m just a little stitious. As a budget pistol, it’s an improvement over the G2 series and one of the better choices in the budget world of handguns.