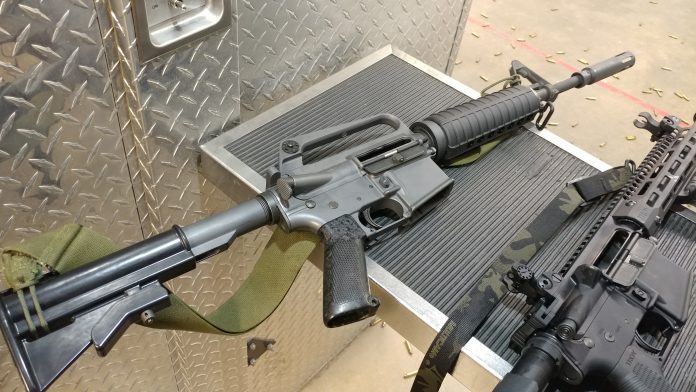 To say the M16’s history isn’t storied would be an absolute lie. We all know the teething issues and most of us know the M16 and M4 family. In between the M16 and M4 is a long line of very interesting, rarely ever mass produced, carbines. One is the GAU-5/A , or for brevity’s sake the GAU-5.

The GAU-5 is a by-product of the Colt Commando and the XM177E2 series of carbines. This particular model was adopted by the Air Force and this is where it earned its odd name. GAU stands for Gun, Aircraft, Unit. Like the M4 the design was intended to be a smaller and lighter variant of the M16. The weapon was quite successful and would serve on the famed Son Tay prison camp in the hands of 45 out of 56 Special Forces commandos.

The Troy GAU-5 is as faithful of a replica as you can get without being an NFA weapon. Obviously, it’s not a full auto weapon, it’s also not a short barreled rifle. The original GAU-5 rifle had a 10-inch barrel with a 4.2-inch moderator. That would make it a few inches too short to be a non-NFA weapon. Additionally, the Moderator was found to be a sound suppressor, even though it contained no baffles.

So this system is entirely NFA free and the closest you can get to the original GAU-5. Today was the first time I’d ever fired and handled one of the Troy GAU-5 rifles. Immediately my first thought was how light this damn rifle was. We’ve attached so much lightweight garbage to rifles these days that the weight gets away from us. The GAU-5 is easily one of the lightest rifles I’ve ever handled. Lighter than most AR 15 pistols.

The flash and noise are quite substantial. It is still a round designed for a 20-inch barrel in a much shorter platform. It’s loud but fun. The sights bring me back to my iron sight M16A2 days. Of course, this is an odd school rifle. We aren’t strapping M-LOK handguards and ACOGs to it.

The Service Rifle collection is one of my favorite line of AR 15 rifles. They are realistic and retro in a day and age where I can basically get an MP5 sized AR 15 slammed down with lasers, lights, and optics until my face is blue. Something about these old rifles makes them absolutely gorgeous. To me, they are on par with rifles like the M1 Garand, the 1903 Springfield, and even the classic 1911.

The AR 15 clone market is massive, but to get legitimate markings and designs you had to use an 80% lower. This allows you to avoid all that.

These are a fascinating, if small, piece of American service rifle history and the fact you can own a well-priced, and well made piece of history is an amazing feat of capitalism.