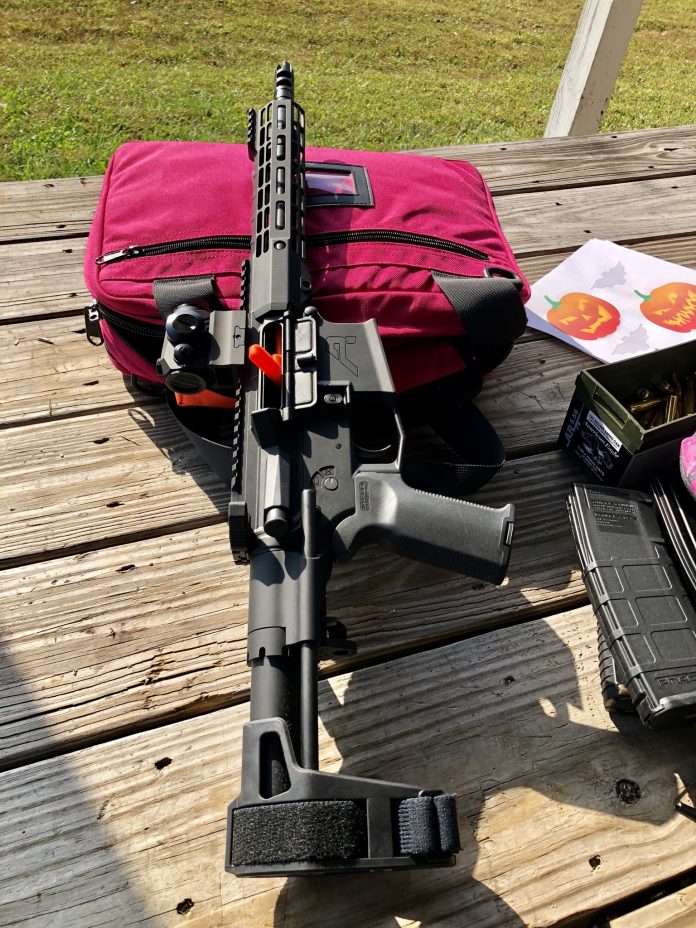 I admit that the first time I heard the term “AR pistol” I was somewhat mystified. I just could not picture the utility of such a thing. But then I discovered that this firearm design fills a niche which lies between a full-length AR (16-inch barrel or longer), and a true ATF-designated short barreled rifle or SBR (barrel less than 16 inches).

Because an AR pistol is a “pistol”, it can have a shorter barrel without jumping through the tax stamp-and-wait hoops of SBR territory. This provides a higher velocity yet still compact  home-defense option compared against a traditional pistol.

Although I am not the “Tammy Tactical” type the idea intrigued me. A rifle-like pistol that would be short enough to be maneuverable inside the house for self-defense? One that I “might” be able to transport less conspicuously? I was interested enough to start looking at options.

I was recently presented with the opportunity to play around with such an AR pistol – built with parts from Aero Precision.

No, I didn’t do the building. My gunsmithing skills are improving but I’m not to that point yet. I let someone else do the creating for me this time. But Aero Precision has tons of components so I may be interested in various parts. Upgrades to my existing AR’s as my technical skills improve.

This Aero Precision model, chambered in 5.56 NATO, is was similar enough to my own ARs that I had a good baseline for comparison. That also meant that I already had *mumble mumble* cases of various 5.56 and .223 rounds in my possession with which to range test the gun.

I ran a single cleaning rod patch down the bore to make sure there were no obstructions, lubed up the BCG with Lucas Oil Extreme Duty and headed to my club range early on a Sunday morning.

Because of its 10.5 inch barrel this is not really a long range firearm so I sighted it in at 25 yards and tried it out to 100 yards. For a defensive weapon that’s all a perfectly reasonable distance. My older eyes with an unmagnified red dot aren’t any good past that anyhow.

After I sighted in my Sig Romeo5 Red Dot I performed a trial with every compatible ammo I had in my basement. This included six different kinds, everything from Wolf to Freedom Munitions to American Eagle to Green tips, 50 grain to 55 grain FMJ and varmint tips in 5.56 and .223. 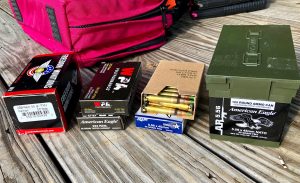 I did the initial shoot-in from the bench off of a range bag and an old rolled up jacket I keep in my car. Later shooting I just used the magazine as a monopod. Just 5-round groups with the various kinds of ammo. It was admittedly a seat-of-the-pants operation but I am not a precision kind of gal and this isn’t a precision gun.

Pro-tip: polyester fleece does not hold up well to the heat of multiple muzzle blasts. The rolled up jacket that I used resembled melted Swiss cheese until I was finished. Oops. At least it was fourteen years old and didn’t owe me anything. Lesson learned.

The second range trip was more of a “endurance test” in the last hour before dark on a Tuesday evening. I put up two targets at 50 yards, and shot transitions back and forth, emptying a 30-round magazine of mixed ammo each time, for a total of five magazines.

The gun cycled easily and smoothly. There was no “sandy” feel like I’ve gotten with a few guns in my past. There were no stoppages or FTE’s with about 250 rounds through the gun.

Loading up mixed handfuls of ammo in different 30-round magazines so that no more than two or three rounds in a row were the same. I did this for five magazines, firing until the mag was empty. The gun only cooled for however long it took to load up a new magazine and pick up the brass from the last string. Then the next magazine of mixed ammo went blazing down range.

The Aero swallowed all of this without a hiccup using four different brands of magazines. It didn’t so much as clear its throat. This Aero Precision pistol just kept right on shooting. 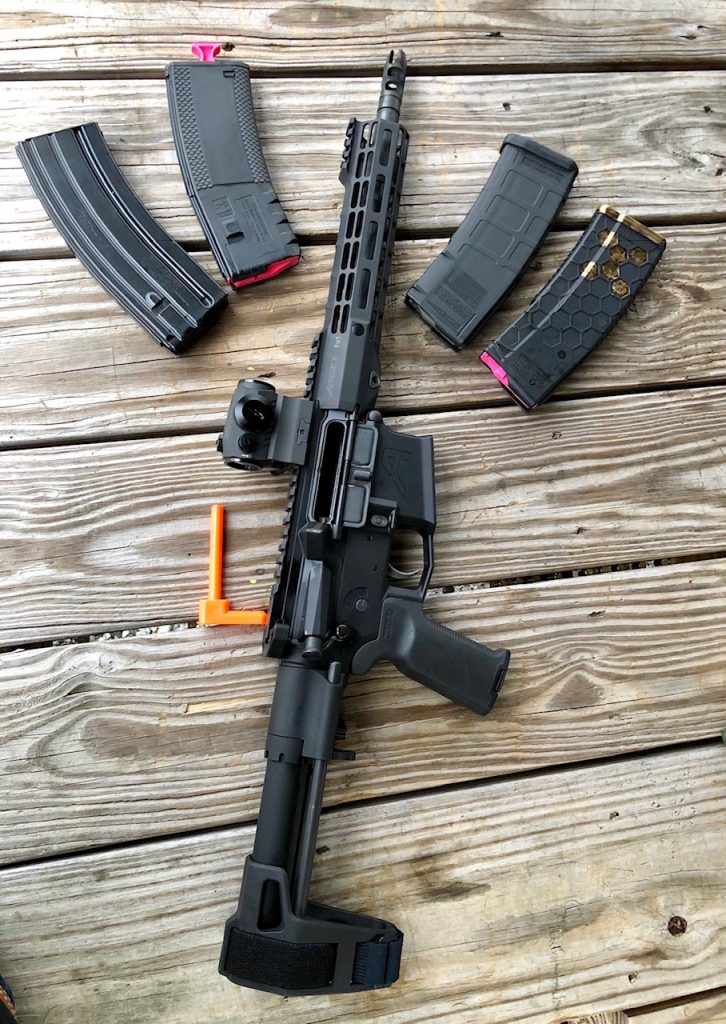 This is the kind of reliability I can appreciate. I am not much of a tinkerer. I don’t see malfunctions as interesting challenges. Rather, I see them as temper-flaring frustrations. I want my firearms to WORK. And keep ON working.

This Aero Precision did just that. For that alone, it’s a keeper.

The ATLAS hand guard was comfortable, smooth, and not obtrusive. I didn’t need gloves to keep from snagging myself on sharp corners. The integrated rail would make MBUS attachment easy if I decide to do so. 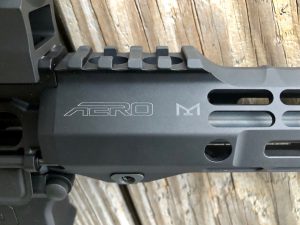 The SB Tactical PDW adjustable arm brace made fitting to my smaller frame easier. I have largish hands for a woman, but I have short arms, so fit is a consideration. The length of pull adjustment of this arm brace was helpful.

One issue I had with the adjustment though is that in the fully retracted position the guide rods of the brace interfered with my ability to get to the safety lever. I could do it, but it wasn’t an automatic feel and flip maneuver. It did get more intuitive by the second range trip, however.

Additionally while in the fully retracted position those same bars made it impossible to get to the rear take down pin for disassembly. It’s a small thing, but it was an inconvenience for me. 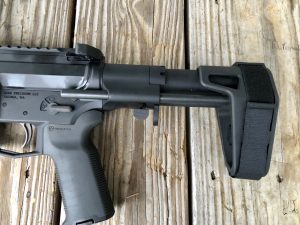 The mil-spec trigger was … mil-spec. Admittedly I am used to a lighter, crisper match-type trigger, but this one had no slop or grit. It performed reliably with zero issues.

The muzzle brake helped to make this Aero Precision AR pistol very flat shooting. While the 5.56/.223 caliber doesn’t have a great deal of recoil to begin with what there is can be accentuated by the shorter length barrel and overall smaller build of an AR pistol. The muzzle break mitigated this effect nicely. 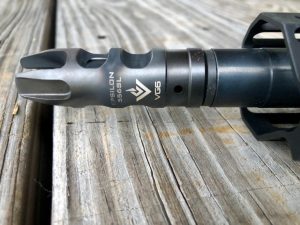 Weight was not really an issue. This is not the lightest gun I’ve ever handled but it was nicely balanced. We all know a little weight can help with felt recoil too. The SB Tactical PDW arm brace also has a QD sling mount point in case one would need to carry the gun around for long periods.

The accuracy was quite acceptable to me, especially given my seat-of-the-pants sight-in at 25 yards. I did try each of the six types of ammo separately within the same magazine, at 25 yards after my initial sight-in. There were subtle differences but they were all acceptable for my purposes.

As you can see even mixed ammo transition drills at 50 yards were accurate enough for me with a 10.5 inch barrel. These would have all been more or less center mass hits. As I said before, I’m not a precision kind of gal. 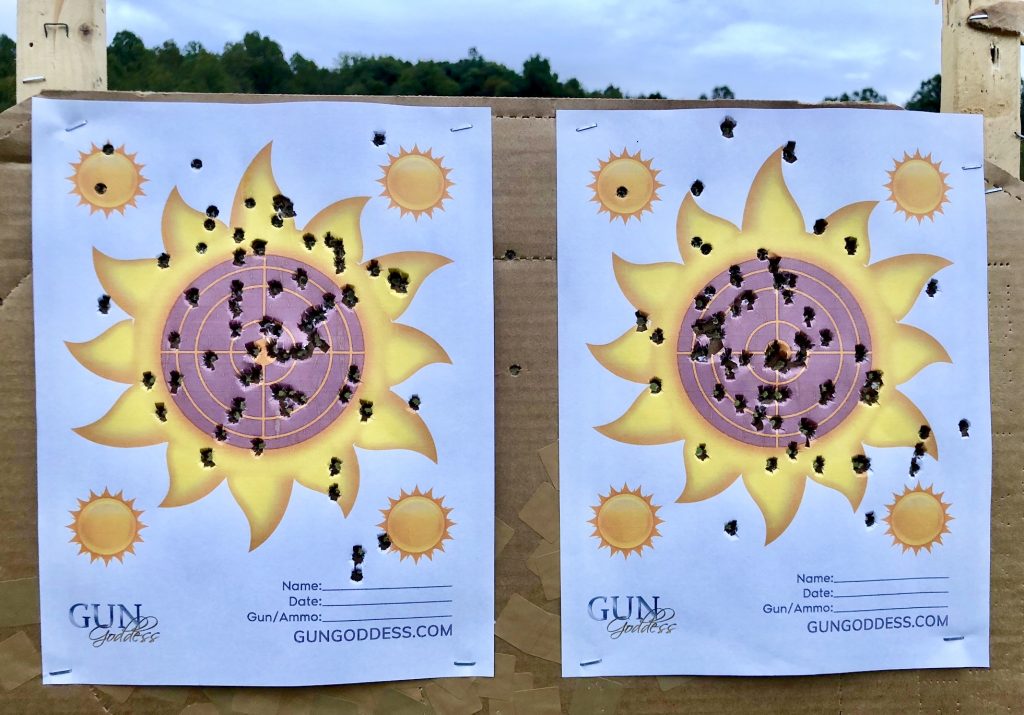 Even though I’m not Tammy Tactical I did also try moving around my home with this gun while loaded up with dummy rounds – just to see. It worked fantastic, more maneuverable than the youth 20 ga shotgun which I have also used for this purpose.

I found this Aero Precision AR Pistol to be comfortable to shoot, reliable to operate, and budget-friendly. The design is small and maneuverable enough to be a home-defense gun, and compact enough to be transportable in a gym bag or other type case that doesn’t scream “GUN!”.

The bottom line is – This one’s MINE. You’ll have to build your own!