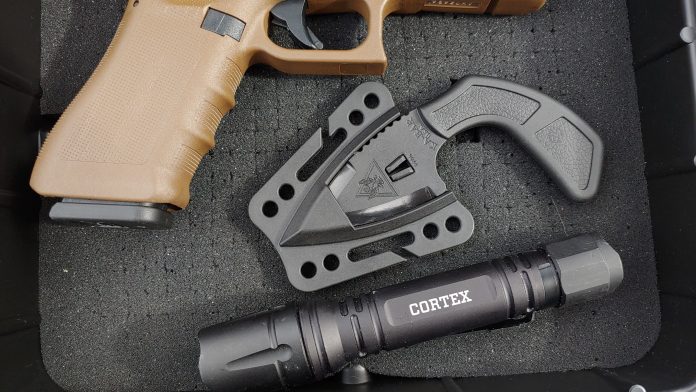 Last month I discussed the G-10 made Lumber Pencil, this month, we are talking about the KA-BAR TDI Sharkbite. The TDI series was specifically designed for law enforcement as a last-ditch self-defense weapon when someone is struggling for their gun. It’s an oddly angled blade that is certainly eye-catching. The Sharkbite is an all-polymer version of the TDI and is designed to be a discreet weapon. The Sharkbite is made entirely from a polymer called Ultramid.

According to the interwebs, Ultramid is a high-strength polymer that is impact resistant very strong. The material can take a beating and not break, bend, or be ineffective. Ultramid isn’t a material most of us are not familiar with in the tactical world, but it seems to be a perfect material for a polymer stabbing implement.

The all-polymer blade of the Sharkbite looks like a shark’s tooth, and obviously, that is where the name comes from. The blade is technically a spear point. The tip is quite pointy, and the blade feels abrasive and somewhat sharp. The sharp tip point is the weapon’s key to success. Trying to slash with this tool would create some discomfort for sure, but it won’t be a debilitating technique for self-defense. This thing is all about stabbin’. 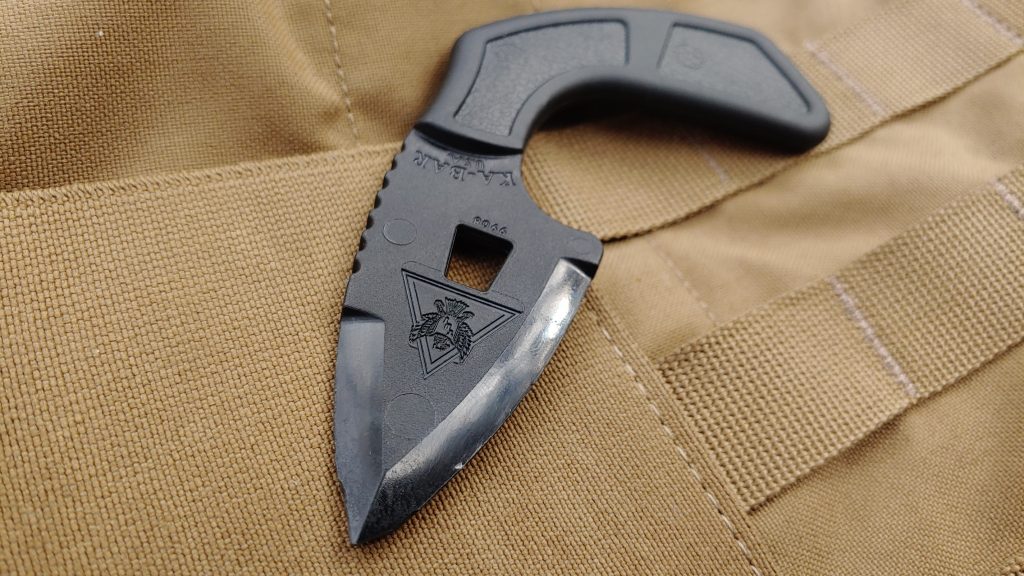 The blade’s 2.6-inch length isn’t much, but it will penetrate and stick pretty well. I piled up several layers of cardboard, posted them against a pole, and went after it. I struck and punched the cardboard repeatedly with the Sharkbite. The Sharkbite penetrated deeply and surprisingly easily. Like Doom guy, it rips and tears until it is done.

I’m legitimately surprised. The Sharbite’s polymer blade has some bite to it. More than I expected. The next test was some meat—a good chunk of chicken that would soon become fajitas warranted my wrath. I awkwardly stabbed at the chicken as it sat at a slight angle on a cutting board. It dipped right through like that pound of chicken breast was nothing. I did it so hard it hit the board and dulled the tip. 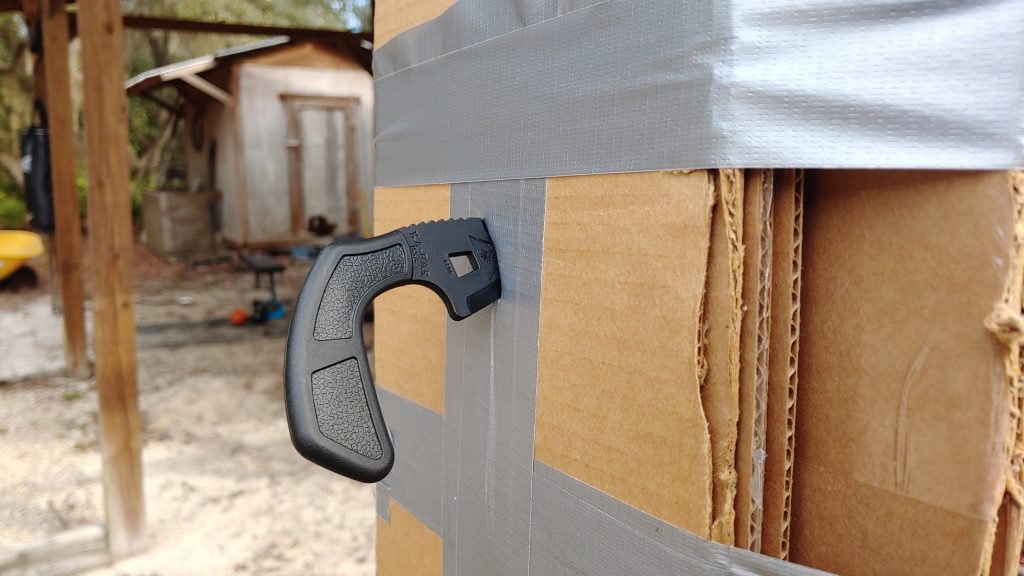 Sharpening a plastic blade isn’t a thing, so I used a metal blade to whittle up my own point to it. That’s why the tip looks a little crazy now. The little polymer blade is cheap and can be easily disposed of after use, and this is a tool you use for purely self-defense purposes. Buy two, one for carrying and one for training.

The weird angle to the blade makes a normal TDI a quasi punch dagger, but it retains the ability to slash and cut. The Sharkbite is 100% a punch dagger. The weird angled design appears to be slightly more 90 degrees ish than a standard TDI. This makes it easier to use as a push dagger than a slashing tool. 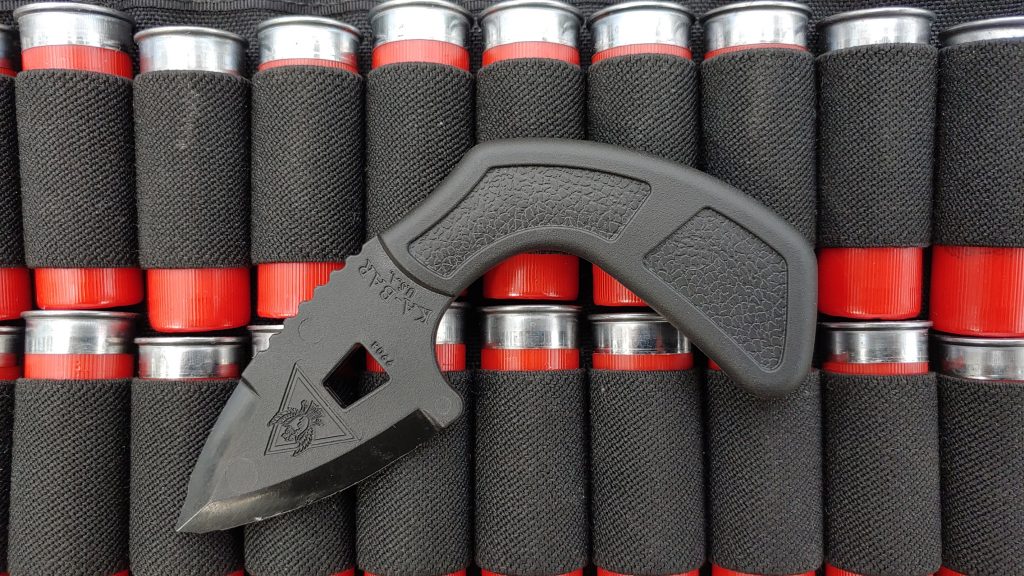 The handle is short and sweet and designed to be small and easily concealable. The handle allows for the thumb to sit on top of the handle and to increase your total retention. The Sharkbite stays put when driven and punched with. There is no movement, and the knife isn’t going anywhere.

The only downside is when a portion of the knife gets driven back into your finger from impact. It’s just the name of the game when it comes to a knife like this.

The little blade weighs 2.4 ounces, and that’s it. That’s nothing. It is hardly hard to carry. The sheath allows for a multitude of carry options. It can be worn on a belt, around the neck, in the pocket, put through MOLLE, or laced in your boot. The sheath is billy, but I found that it works well for pocket carry. 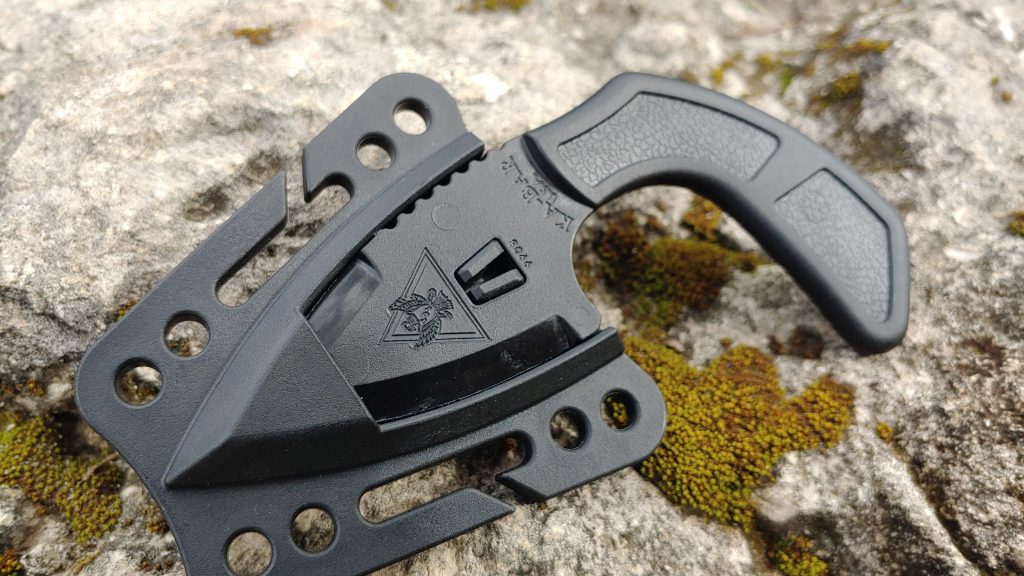 The bulkiness keeps the sheath in your pocket and makes it easy to draw the weapon from. The retention is based around two posts in the center of the blade. Press it down, and you can free the blade from the sheath and draw it. The tip is completely covered, but most of the knife’s blade is not. The Sharkbite can be mounted with the handle left or right in the knife for an easy draw regardless of how you wear it. 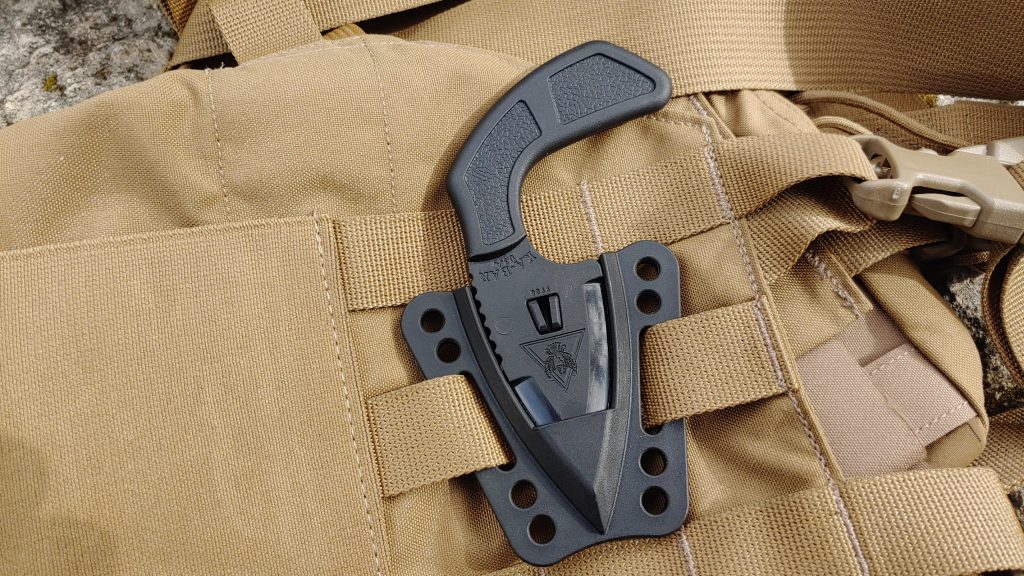 The Law and the Sharkbite 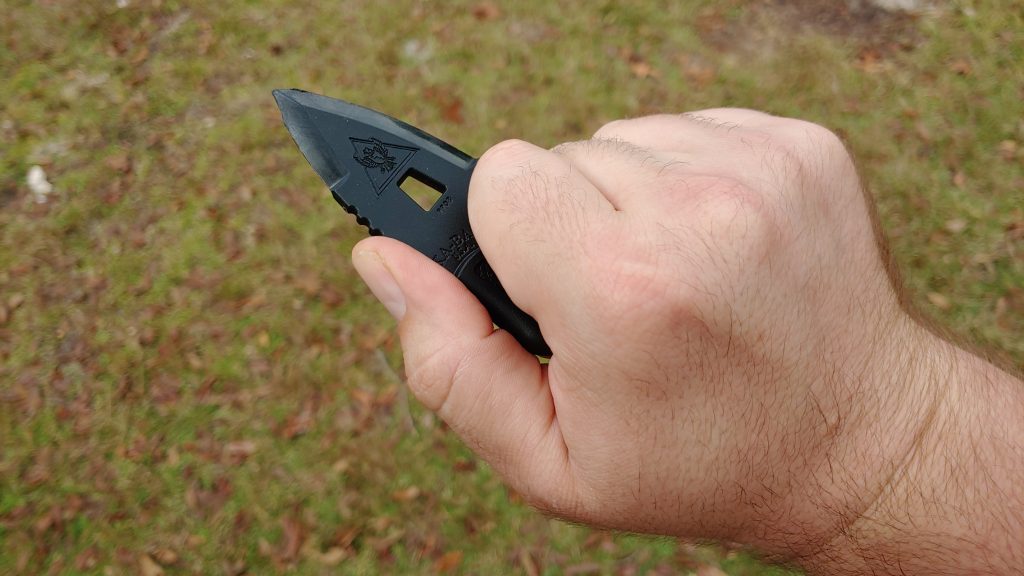 That is where the Sharkbite shines. It’s a weapon and will likely fall under your state’s knife laws. Most knife laws are laxer than gun laws, so carrying this in various places where a gun is a no go is it’s the best strength. The Sharkbite certainly has some bite for a polymer weapon and delivers a good bit of pain for a plastic knife.