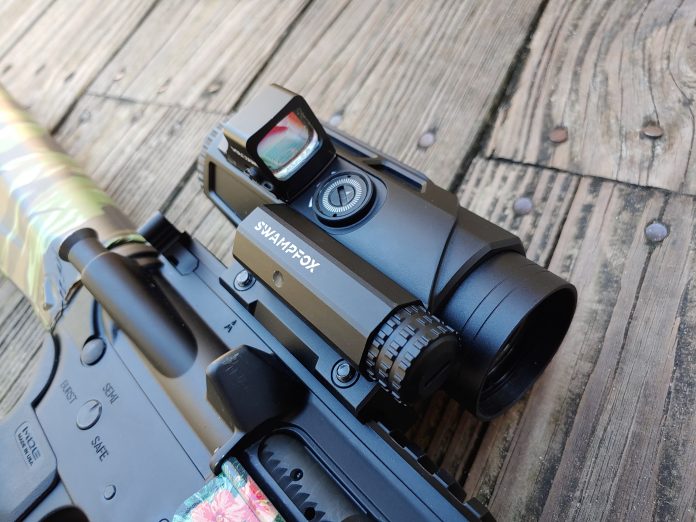 I love prism-style optics. Maybe it’s because of my formative years as a Jarhead, and maybe it’s because I like simple things. Who knows? A little company called Swampfox makes a few different prism optics, and I own and use the Blade and Trihawk quite a bit. When Swampfox Mike reached out and asked if I wanted to take the Saber for a spin, I jumped up and down at the opportunity.

The Saber was revealed at SHOT 2022, and it’s the first 5X prism from Swampfox. The Saber isn’t afraid of being a big optic or providing a handful of power to the end-user. This big chunky optic certainly isn’t the lightest or smallest on the market, but the Saber embraces that size and uses it to the best of its ability.

What do I mean by that? Well, that size ensures you have a nice big sight picture. With the 5X magnification, you still get a massive 30.9-foot field of view at 100 yards. That makes the Saber a best in class in regards to field of view. Other 5X prism optics like the Steiner T536 and M536 give you about 20 feet. The Spitfire HD Gen 2 5X prism scope from Vortex only grants you 23.3 feet at 100 yards.

That’s downright insane. It’s a huge, vivid field of view. This kind of field of view makes it easy to spot targets and even easier to track targets. The Trihawk boasts a similarly large field of view, and I’ve used it to watch does through fields this hunting season without needing to move much to follow them through the optic. 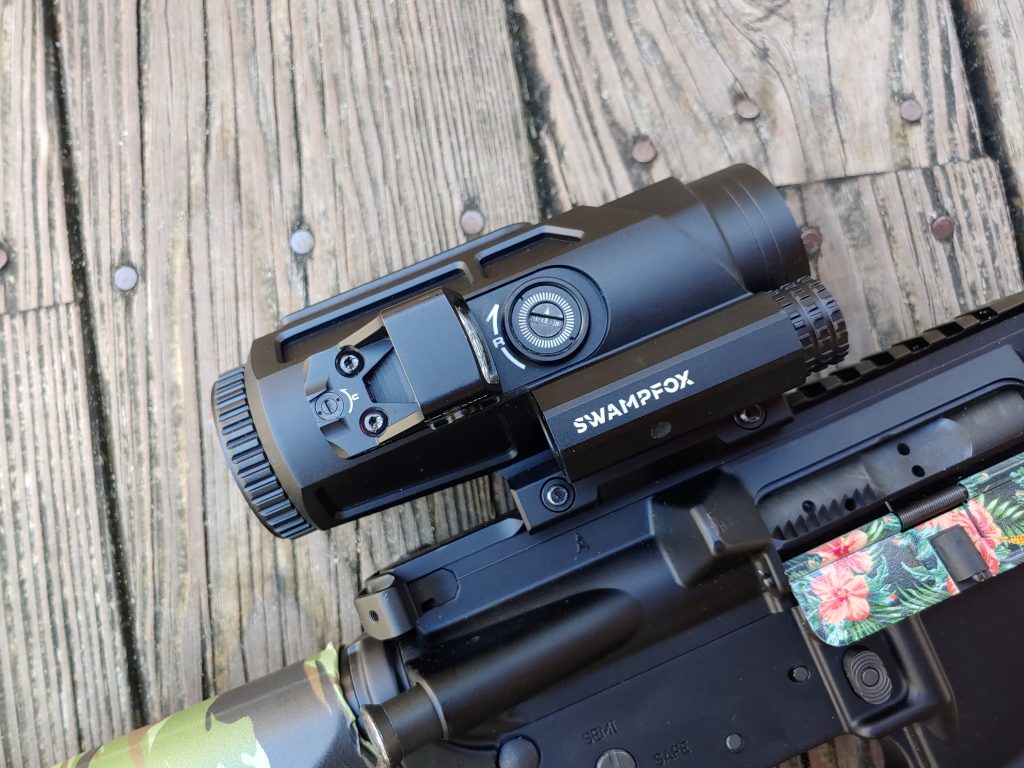 The Saber does weigh 24.7 ounces without a battery. The optic is 5.74 inches long, with a 36mm objective lens. It’s a big optic, but the field of view couldn’t be done with a smaller optic, so keep that in mind. The eye relief is surprisingly good for a prism at 2.56 inches.

Five power magnification is a bit much. Even for occluded shooting, the 5X mag leaves something to be desired. To make up for that, Swampfox added two points to attach a mini red dot, specifically those mini optics in Shield RMSc footprints. These ports are located at the left and right of the optic. I’ve mounted my 507K to the optic.

The reticle comes in both a BDC and MOA format. I used the MOA format, and it’s a bit more versatile for a variety of firearms. There is a crazy amount of drop on the reticle, and you get 40 MOA worth of hash marks to compensate for ballistic drop. 40 MOA is an absolute ton of drop on most rifles. On a 308 or a 5.56, you are looking at an insane amount of drop. 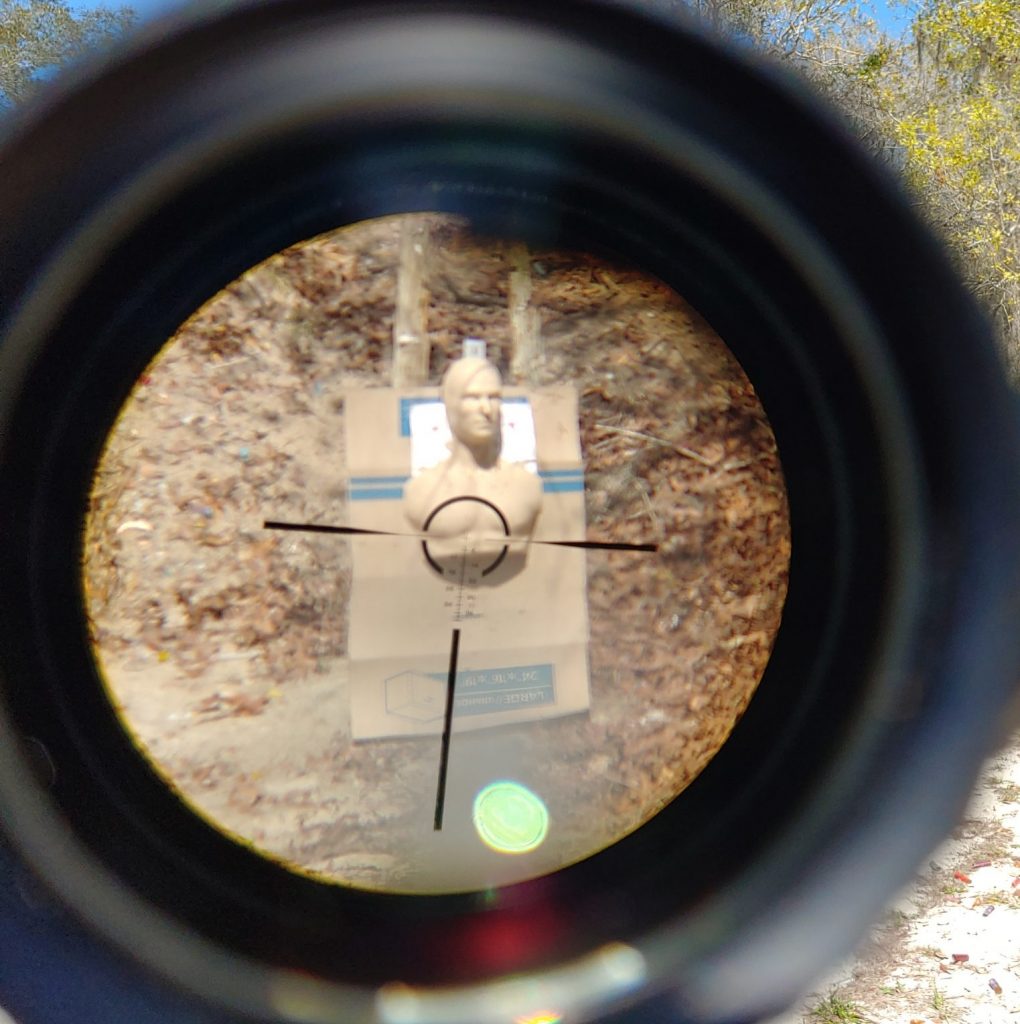 For those calibers, that seems silly. That much ballistic drop gives you 800ish yards for 5.56. That’s silly, but it’s not so silly on rounds that drop a fair bit faster, like the 7.62 x 39mm and 300 Blackout. That makes it fairly easy to engage at long distances with those calibers accurately.

The Saber uses a partially illuminated reticle as well. The illuminated portion is a huge three-quarter circle with an illuminated cross in the center. This big reticle can be used for closer ranges. Not CQB distances, but within 50 yards to 100 yards or so, you can rapidly put lead on a big target quite quickly. It’s tough to say take a snapshot at these ranges, but that’s essentially how you use this massive reticle. 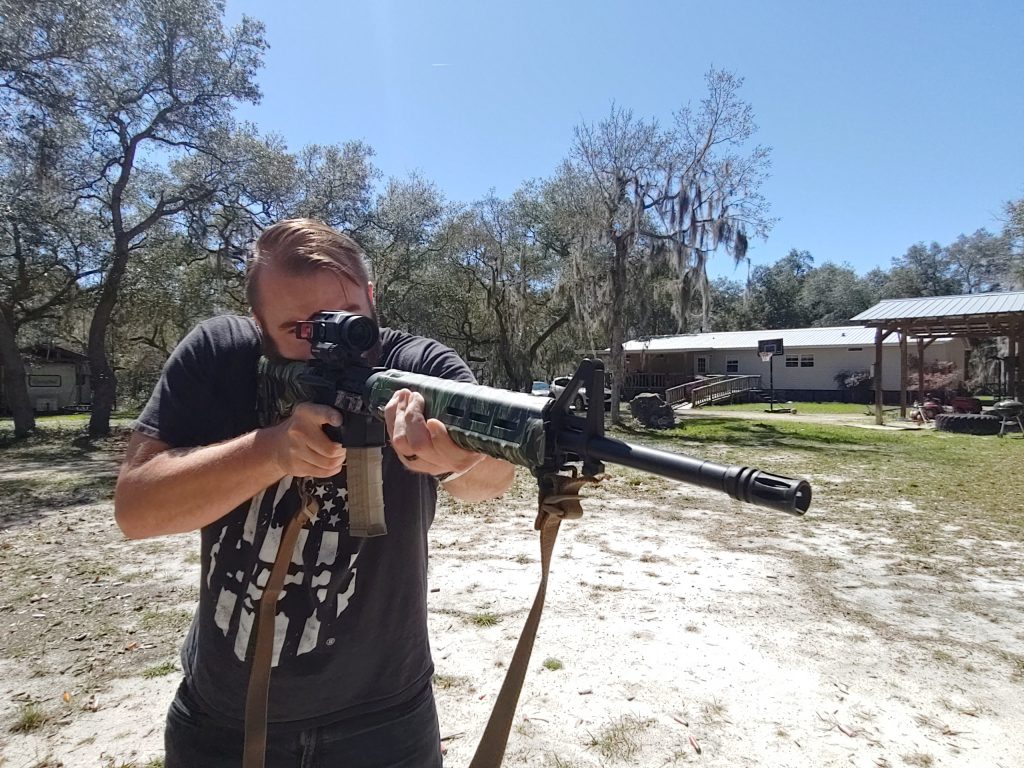 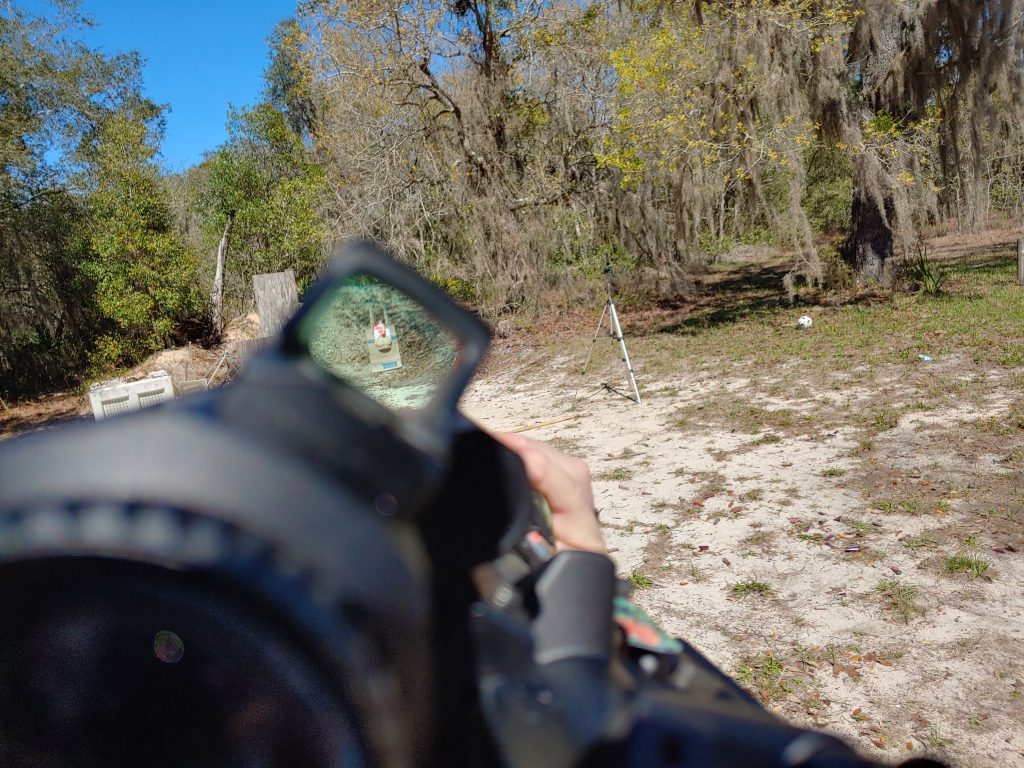 That reticle packs ten settings, 2 of which are night-vision compatible. The reticle is bright enough to be easily seen during the day. I took it out on a clear, bright day in Florida at noon and used it in the open. Even in this high brightness environment, the reticle sat noticeably illuminated. It meets my threshold for being daylight bright, and my threshold due to my environment is quite high.

The optic includes everything you need to get ready. You get the battery, an optic cover, the tools to attach the optic, and the tools to zero the optic. It’s fairly simple, and I mounted it to my Aero M16A4. The turrets are recessed and require a flat head tool to make adjustments. 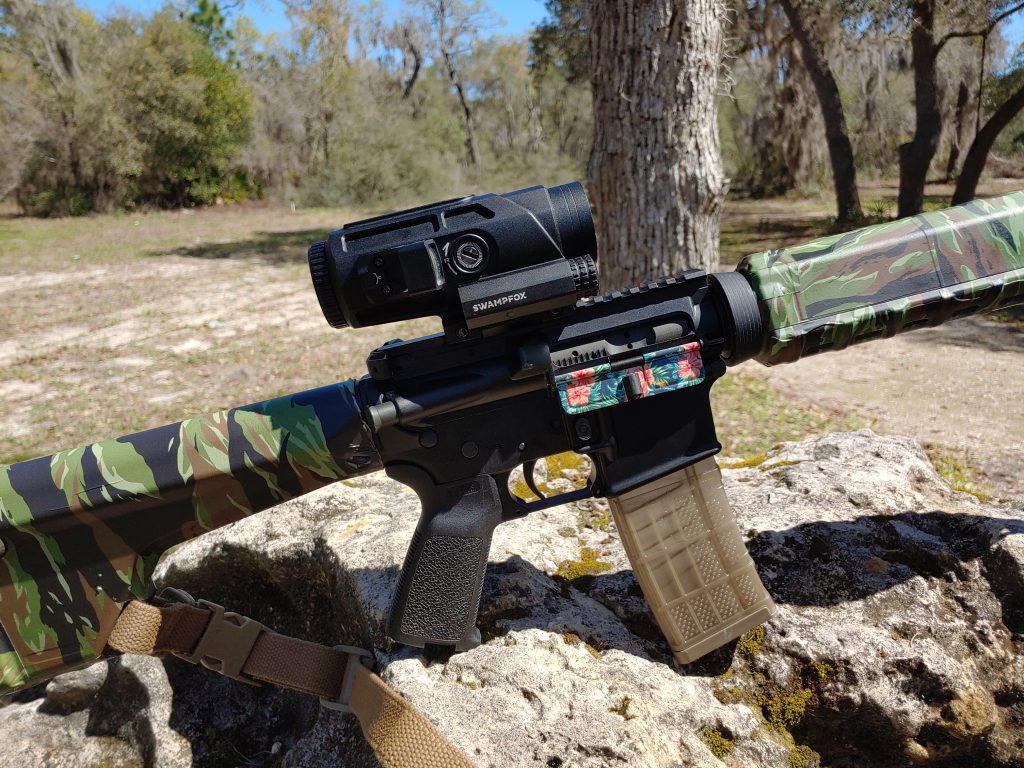 Zeroing took no time at all. I got the thing spun up in six shots total. The adjustments are .5 MOA per click and are damn exact. I zeroed at 50 yards, did the math, and was able to adjust with a three-round initial group and a measurement from there to zero.

I zeroed my offset Holosun 507K at 25 yards. I’ve never used an offset dot, so it was a new experience. It was an interesting experience, to say the least. However, it got zeroed.

The reticle is crisp and clear. It’s not super small like the Vortex Spitfire’s reticle. It’s large, in charge, and easy to use. The 5X magnification gets you nice and close to the target, and even at 100 yards hitting tiny 4-inch sized gongs isn’t tough in a supported position. 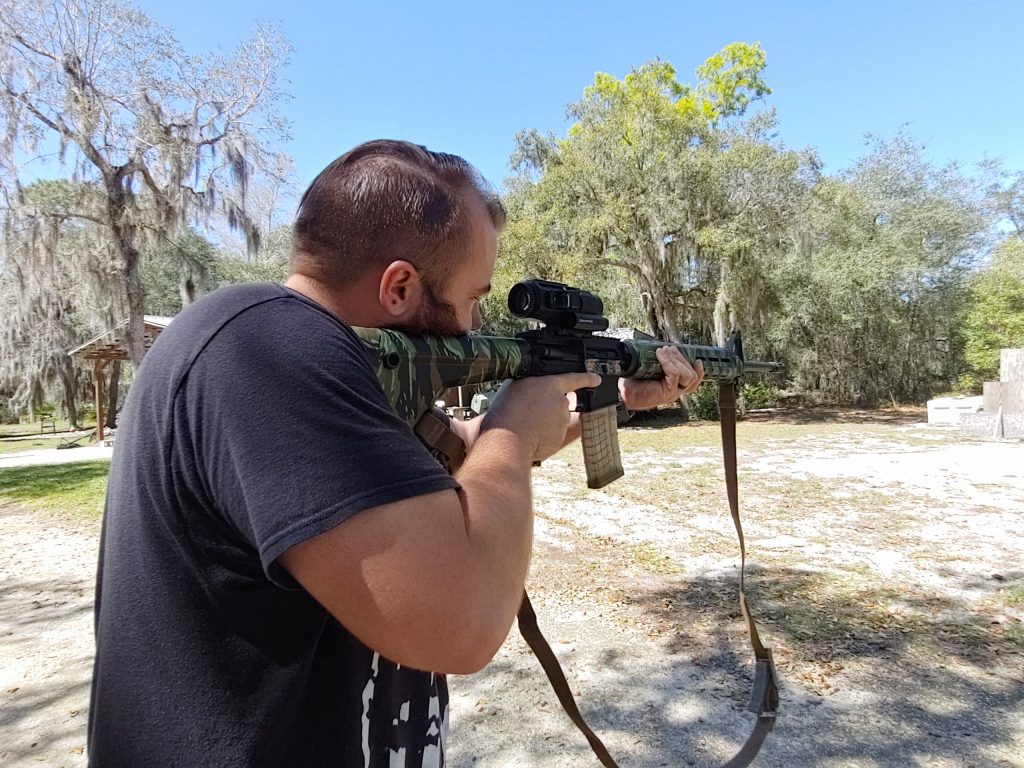 Using the red dot requires a slight cant of the rifle. When done, you can quickly engage the target with rapid succession and do so within 50 yards or so, depending on target size. It doesn’t feel awkward to spin the rifle and engage. I like the position of the red dot on the side of the optic.

I only have a 100-yard range, so I can’t really stretch the legs of the optic. However, I did pop the optic off of the rifle and take it for a walk. I have some premeasured locations along dirt roads out to a quarter-mile.

At a quarter-mile, I could see a green street sign and the white lettering. I can’t exactly read it, but I can see the different colors and tell what they are with some distinction. I could pick up plenty of details from the sight picture. Seeing and telling apart trees, rocks, the road, and vehicles was easy. It’s rock-solid in the clarity department.

The Swampfox Saber is a well-made optic that doesn’t replicate what other optics have done before. It’s an optic that innovates and does so at a price point of 389 dollars. That’s tough to beat. It’s not released just yet, but keep your eyes out. I imagine it’s coming soon.