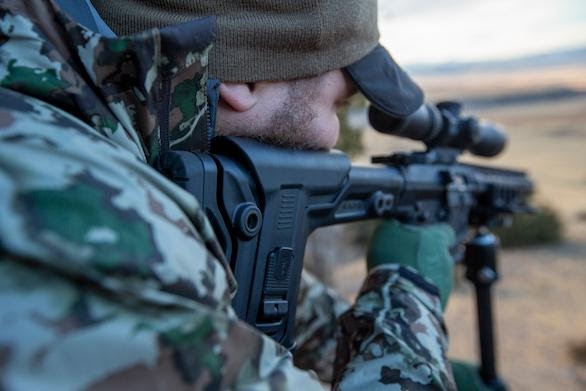 Gainesville, GA (June 8, 2021) As with most technical pursuits, long-range shooting has a good number of basic terms a shooter needs to know on their way to being a top shot. These terms include:

Ballistic Coefficient – According to Wikipedia, “the ballistic coefficient (BC) of a body is a measure of its ability to overcome air resistance in flight.” Less air resistance equals less drag, and less drag means better performance from a “body,” in this case, a bullet.

BC is denoted numerically, and the higher the BC number, the easier and more efficiently the bullet passes through the air. BC is determined by several factors, including the shape or design of the bullet, its weight and the diameter. Long-range shooters want bullets with a high BC to retain speed longer, drop less and be less affected by wind.

Guess which is the better choice for banging steel at 1,000 yards?

Caliber Selection — Long-range shooters use a variety of calibers, and within each caliber, there are many, many loads available. And each specific load will have its unique bullet weight, BC, and muzzle velocity.

So how does a new shooter know which caliber and cartridge might be best for their particular long-range endeavors?

The smart shooter will use Ballistic and its huge load library to make that decision. Ballistic contains information on over 5,000 projectiles, factory loads, and military loads, plus performance data points (like BC’s) from leading manufacturers and military and performance testing.

Using Ballistic, plug in the various calibers and cartridge loads within the calibers under consideration, the distances at which they will be used, and the anticipated environmental conditions. Ballistic will calculate all the data needed to make the best load choice.

MOA – MOA stands for “minute of angle.” It is an angular measurement used in rifle scope adjustment values.

[Edited for math correction]
Think of a circle cut into 360 equal slices, and each slice equals one degree. Then each degree gets cut into 60 pieces and those are your “minutes” of angle. At 100 yards, each individual minute equals 1.047 inches. Let’s say a rifle is hitting the center of the bullseye at 100 yards. If the elevation control on the scope moved up one full MOA, the bullet should now strike 1.047 inches higher. Move the windage control one full MOA to the right, and the bullet should hit 1.047 inches to the right.

Now, go back to the 100 yards standard. Most rifle scopes have elevation and windage adjustments set at either .5 or .25 MOA per click. So, the shooter takes three shots at 100 yards to zero the scope and rifle, and the three bullets all hit two inches low and a half-inch to the left. With a .5 MOA scope, a bullseye hit will require the shooter to give the elevation control 4 clicks up (.5×4 = 2 inches) and 1 click to the right (.5×1 = .5 inch).

MOA is not the same as MILs or Mil-RADs, which are also angular measurements used in some scopes but perform their measurement on a different scale.

Ballistic is the definitive ballistics trajectory calculator, intended for long-range and precision shooters who want a serious–and a seriously accurate–application. Ballistic will calculate your bullet’s trajectory, windage, velocity, energy, lead, and flight time for any valid range. The app can also compensate for atmospheric conditions such as temperature, barometric pressure, humidity, and altitude–it can even accept density of air or density altitude inputs! The world-renowned JBM Ballistics engine powers all Ballistic computations. Ballistic is used by competition shooters, long-range hunters, and the military to deliver the most precise calculations possible.

With Ballistic, you’ll be able to make the most accurate calculations for every shot, everywhere, even in areas with no cellular coverage.