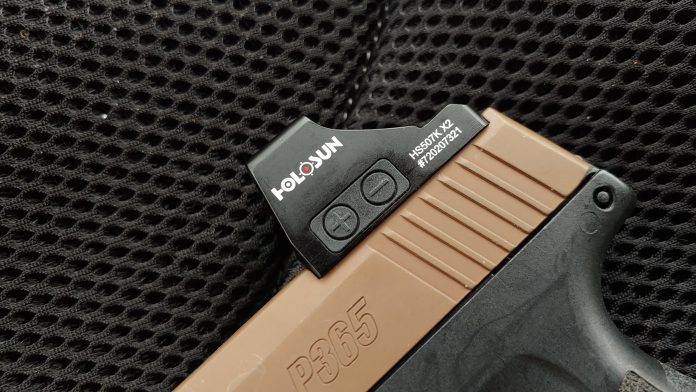 Who thought Holosun would become an industry leader? Sure they’ve made some decent red dots, but no one would call them an industry leader. At least no one did until the Holosun 507K premiered. The mini red dot market is crowded, but the micro red dot market is relatively small. Micro red dots being the little fellas small enough to outfit the most diminutive of guns. Like the Glock 48/43X MOS, the Hellcat, and of course, the SIG P365. Holosun’s 507K is the pack leader of micro red dots.

The Shield RMSc started this category and SIG followed with the Romeo Zero. However, after lots of testing, both of these optics lack the durability necessary for a defensive-oriented pistol. The Holosun 507K has proven time and time again to be the most durable of these micro red dots. After doing a fair bit of research, I snatched up a 507K and quickly attached it to my SIG P365 hybrid design. (It’s an XL slide on a standard P365 frame.) 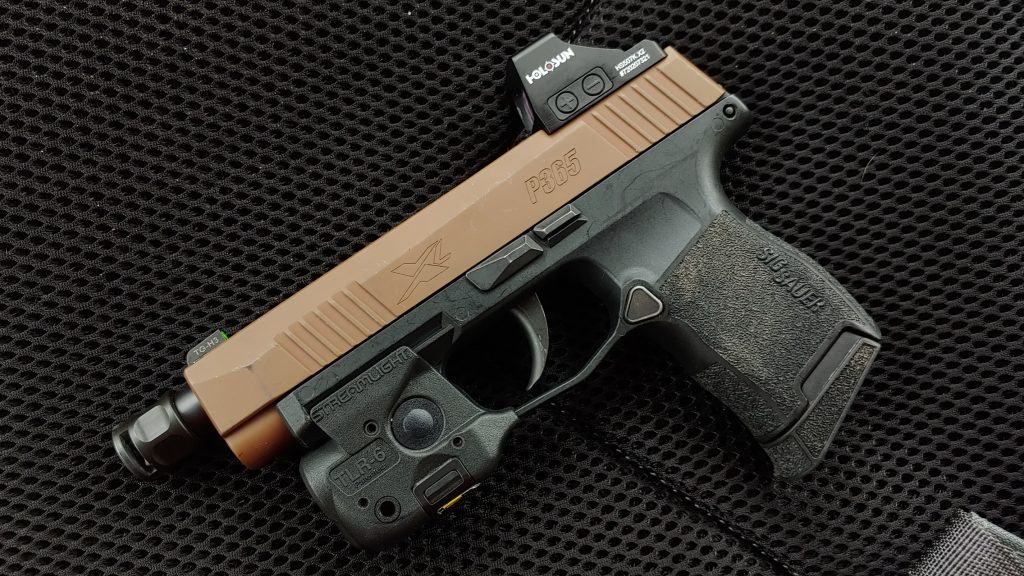 Sadly I couldn’t find a 507K V2, which features the larger buttons. The X2 is the newer model post-Trijicon lawsuit that features much smaller buttons. It is what it is, unfortunately. The 507k X2 gives users a few innovative features.

This includes the multiple reticle system that grants the 507K a 2 MOA reticle, a 32 MOA ring, and a combination of the two. People living with Astigmatism love the 32 MOA reticle as it appears clearer. The 507K X2 comes with 12 brightness settings. Ten are for daylight use, and two are for night vision use. The optic is submersible up to 1 meter for 30 minutes with an IP67 rating. 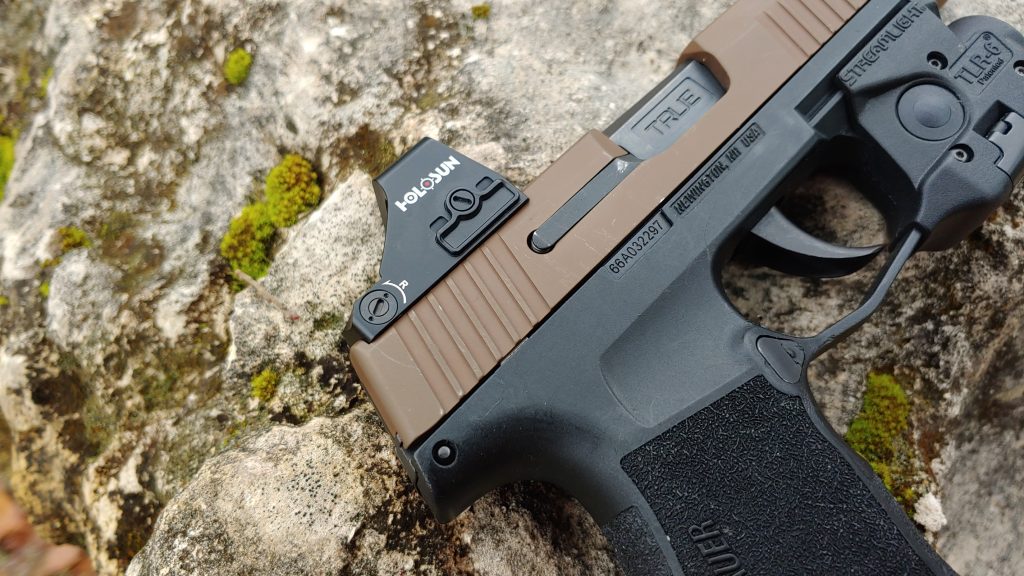 The battery will last 50k hours on setting 6. The battery tray is hyper convenient and located on the side of the optic. As far as I know, this is the only micro-optic that utilizes a side-loading battery instead of a bottom loading design.

Red Dots on pistols are a brilliant solution for increasing your abilities. A red dot makes a handgun easier to shoot accurately, easier to shoot fast, and easier to shoot at longer ranges. With that in mind, I zeroed at 25 yards initially. I set up with a bench and used a somewhat supported position to ensure proper zero. I had to make a few adjustments, but it didn’t take long. 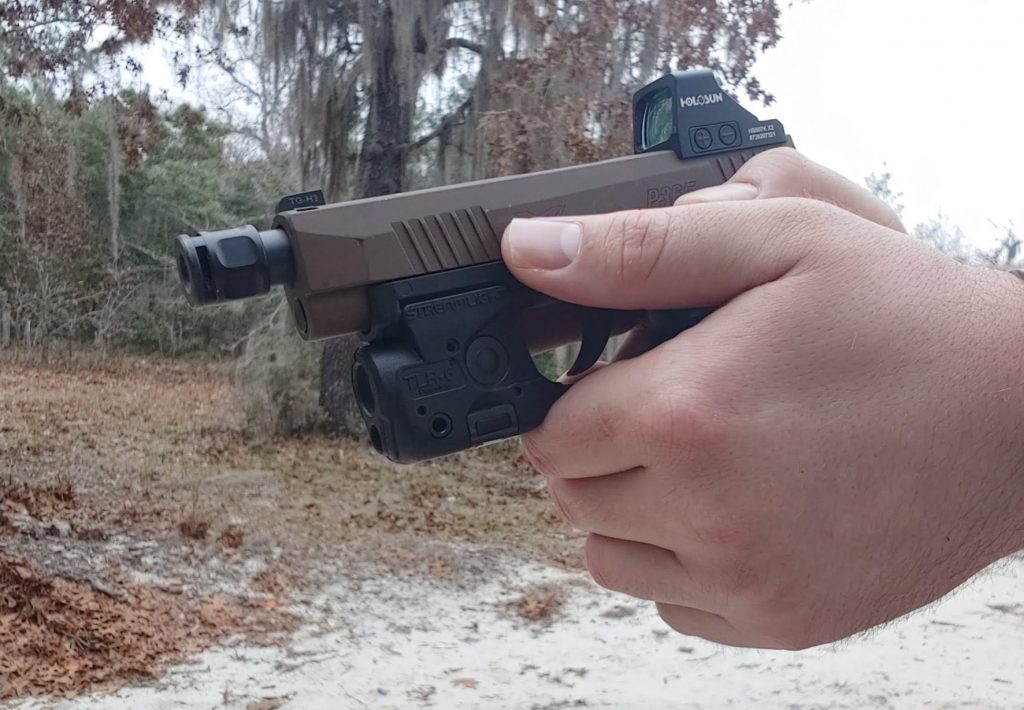 I zeroed with the 2 MOA red dot because it obscured less of the target. The 507K sits ultra-low on the gun, and the mechanical offset is even more minimized than other pistol mounted optics. The optic sits low enough that a small notch in the rear of the sight acts as a backup iron sight that aligns perfectly with the front sight of the P365. 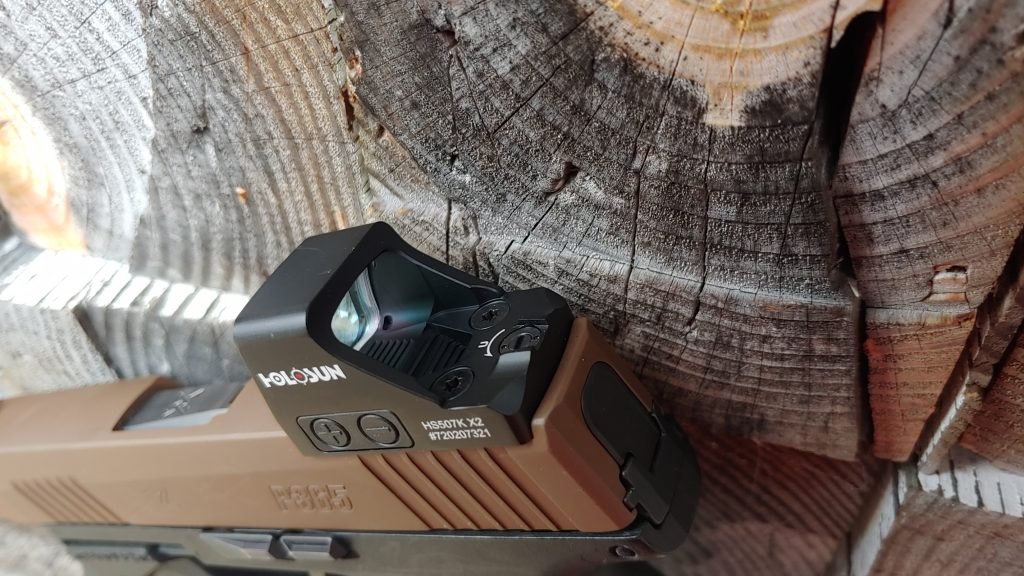 The little 2 MOA reticle sounds too small for a handgun, but it works. The dot is quite crisp, and focusing on the target makes it easy to see the dot. If it feels too small for speed, swap to the big ole 32 MOA circle or circle and dot reticle. They are massive but clear and easy to see and find for those speedy close range encounters.

Guns like the P365 force you to remove the rear sight to mount the optic, and it’s nice to have a backup rear sight built into the optic. Once I was zeroed, I started experimenting with shooting at various ranges for both speed and precision.

My lovely girlfriend got me a set of steel targets for Christmas that includes a small 4-inch gong. At 25 yards, I was able to ring that 4-inch gong enough times that it looped over the top of the hanger. That’s quite precise for such a little gun. The 507K completely eliminates any issues with the short sight radius attached to compact pistols. 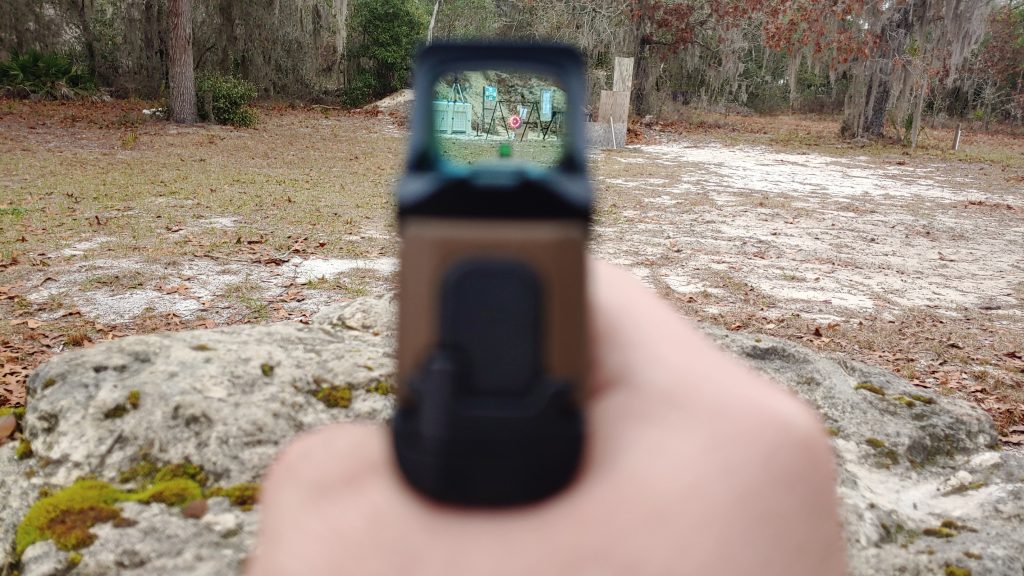 My best time with iron sights is a slow 8 seconds or so with a subcompact pistol. After a run or two to warm up, I landed a solid 6.7 second El Presidente drill. I stopped after that because I wanted to go out on top. (Of my personal record, not the near three-second times the pros are getting.) 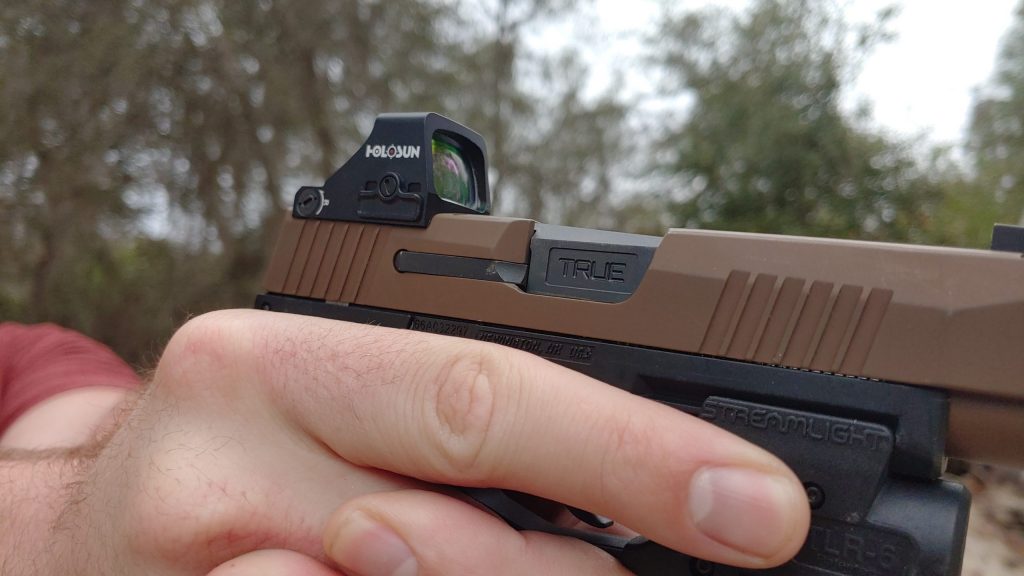 I used the 32 MOA reticle for this drill and did find it to be an awesome choice for target transitions. All I have to do is look at the target and put the dot on it. Target focus is way more natural than sight focus, and a red dot is all about target focus.

I blasted through several hundred rounds of varying power levels. From snappy 124 grain NATO loads to softer shooting 115-grain FMJs. I even had some 147-grain subsonic JHPs, so variety was the name of the game. Regardless of the recoil and round selection, the optic never flickered or fluttered. The reticle stayed put and zeroed without issue as well. 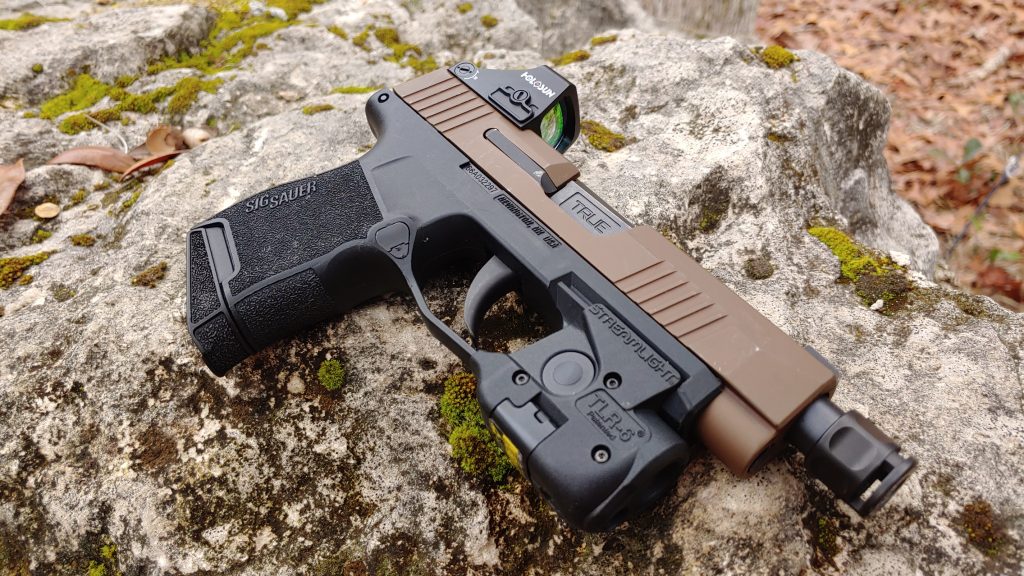 The small buttons are very tactile and easy to reach with the off-hand thumb. That’s somewhat important if you plan to swap reticles as necessary. The smaller buttons are arranged horizontally, and the only real issue is turning the optic off. It’s tough to hit the + and – buttons at the same time while holding the gun. The good news is I don’t see many issues with having to turn the optic off quickly. 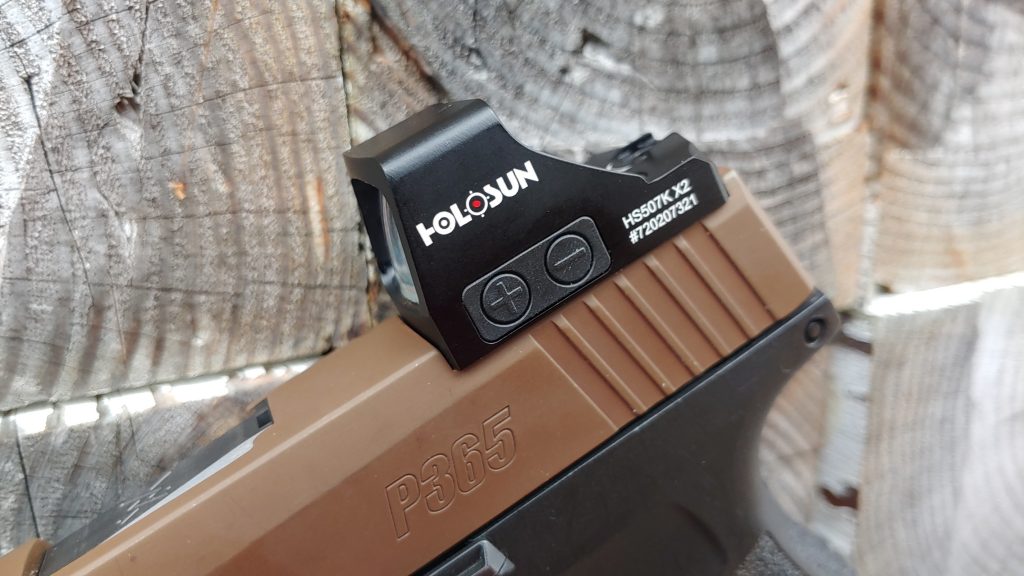 This little fella weighs 1 ounce, so it’s tough to say it weighs you down. It’s super small but quite useful for its size. Micro-optics are a growing category of pistol red dots. There might be a dozen new micro-optics by the end of 2021, but as of now, the Holosun 507K is the pack leader.

It’s light, small, low profile, as well as durable, precise, and easy to use. The 507K will increase your effective range, speed, and ultimately effectiveness with your teeny tiny pistol.