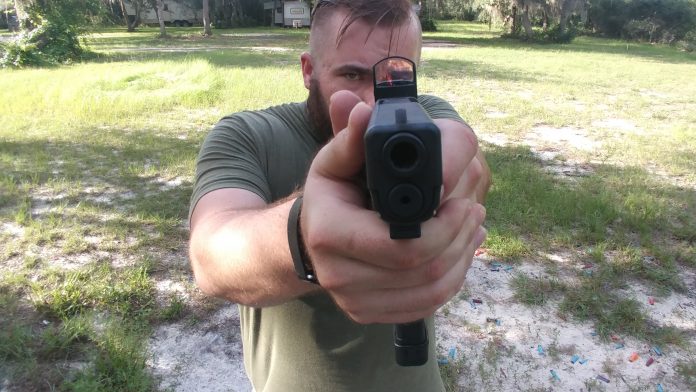 Miniature red dots are becoming a major part of the market. Optics are like any other technology, they get smaller as technology gets smaller. Minature red dots have gotten to the point where they can be mounted to handguns with very little additional bulk and weight. The FastFire series was one of the pioneers on these mini red dots and the FastFire 3 is the latest in the FastFire series. I’ve gotten one recently and decided to take it for a spin.

The FastFire 3 could be considered the budget option for miniature red dots. It’s affordable, buts it not cheaply made or unreliable. The FastFire is a well-made optic that just happens to be significantly cheaper than models from Trijicon or Leupold. It’s not a duty grade optic like the Trijicon or Leupold, but an affordable model for competition and even home defense. 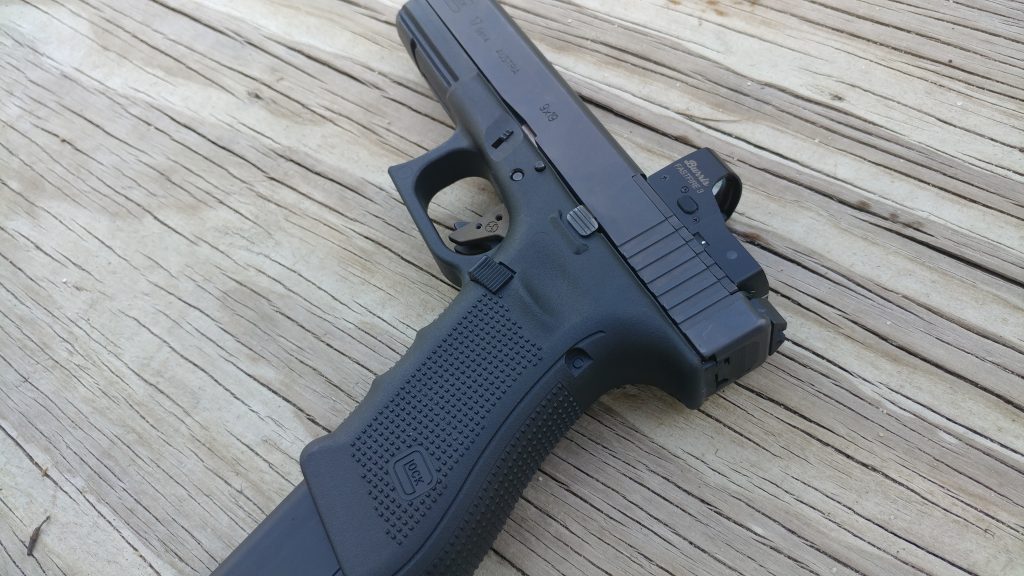 The FastFire 3 has an MSRP of $299.00, but the street price is significantly lower. I picked mine up for less than $150.00 locally. The FastFire 3 weighs only .9 ounces and is only 1.9 inches long. Since the FastFire is a popular series of optics it does have a common footprint and guns like the Glock MOS series include a specialized mounting plate for the Burris.

The FastFire 3 also comes with a Picatinny adapter for use on long guns. Additionally, there is a large protective shade that fits over the weapon when mounted to long guns. It’s see through and provides a higher level of protection from bumps and drops. This shade is too large for a handgun but perfect for long guns. You also get a battery, attachment screws, a Torx wrench, and instructions.

The FastFire 3 has three different brightness modes and an automatic adjustment mode. The automatic mode works surprisingly well and does adjust very quickly to the environment around you. The manual settings are all triggered by the simple press of a button and three settings have been adequate for both dim and bright environments. 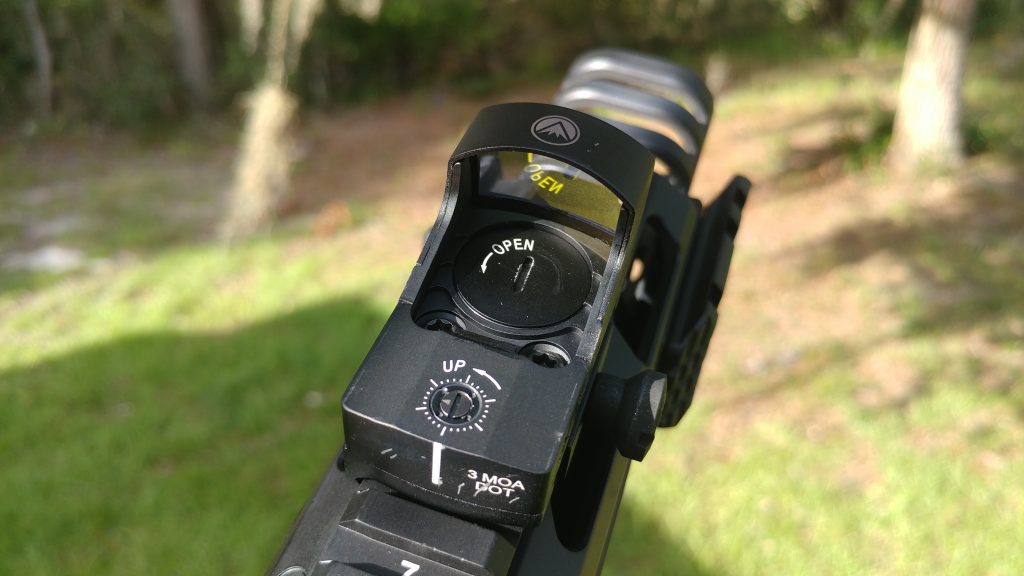 There is an auto-off feature that will shut the optic off after 8 hours. One of the best features is the top of unit battery access. No need to remove your FastFire 3 to swap the battery out. This is quite handy once the optic is Loc-Tited down to a mounting system. 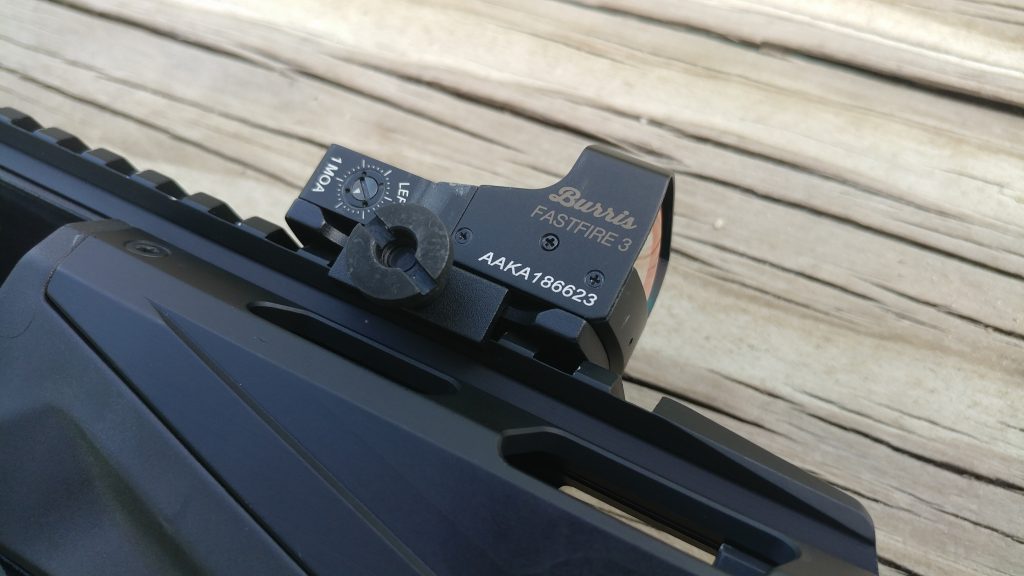 Shooting with a red dot on a handgun has become a bit of an addiction with me. Its so much fun, especially to really reach out and touch a target with relative ease at 50 yards. The FastFire 3 is easy to mount to my Glock 17 MOS and its small size and light weight make it a natural handgun fit. 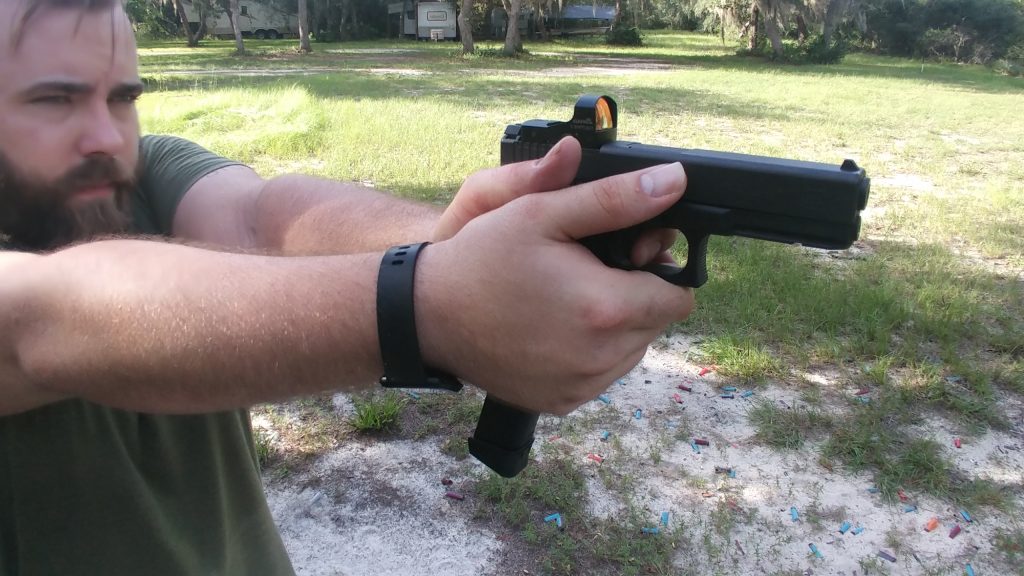 The red dot reticle is very crisp with very little washout. The reticle is easy to see and even in the brightness of the Florida sun, I could pick it up with ease. The highest setting is perfect for a bright day, and the automatic mode does its job well. As an experiment, I simply kept a sight picture as I transitioned from indoors to outdoors. The Fastfire 3 never failed to effectively illuminate the dot. 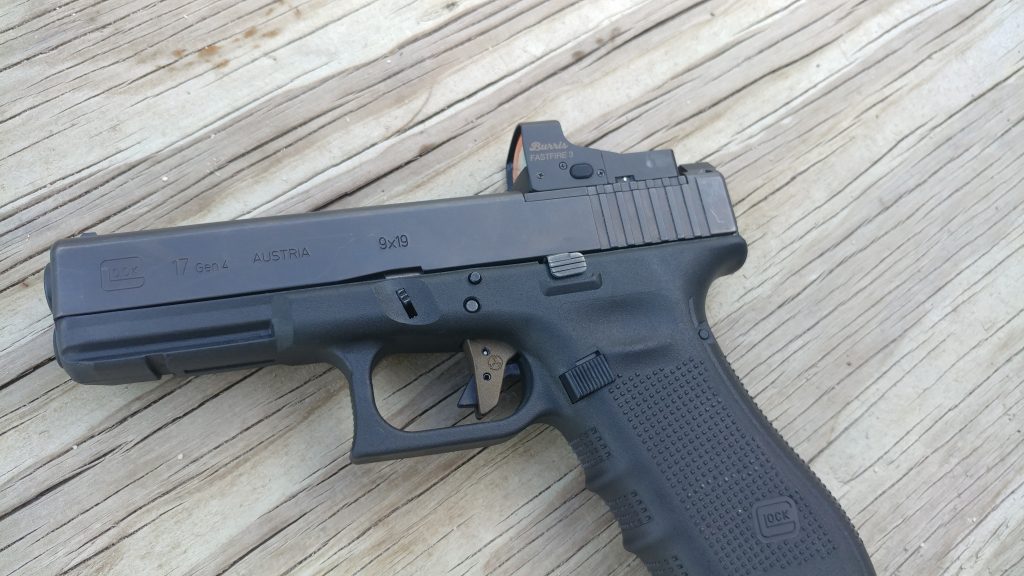 I transitioned to the FastFire to its picatinny mount with the protective shade onto a KPOS Scout and found it to be an excellent little optic for SMG sized weapons. It worked for acquiring a quick sight picture and for accurately putting rounds downrange. 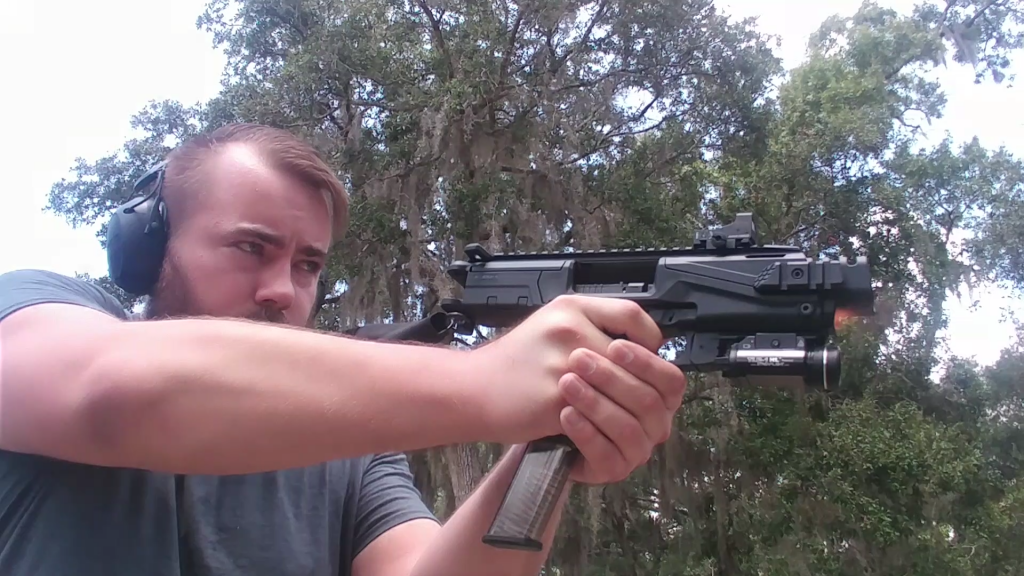 For a real test, I moved it to the Mossberg Shockwave. This little powerhouse of a shotgun has a vicious recoil impulse and I wanted to see just what the FastFire 3 could take. Some of these optics have an interesting issue with harsh recoil. 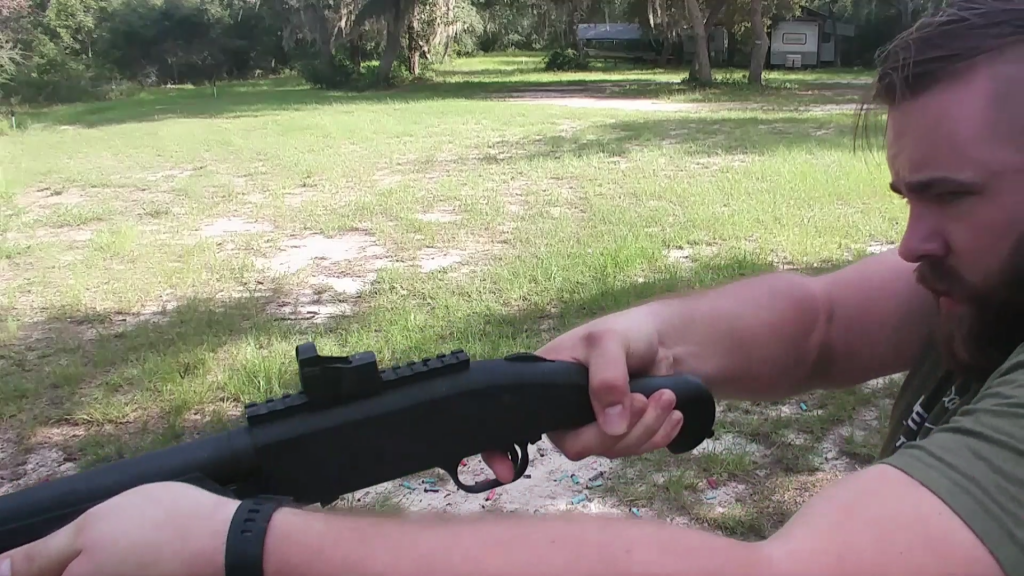 The recoil can actually affect the connection to the battery and turn the optic off for a brief second. I loaded up some buckshot, stretched my shoulders and got it. The low profile nature of the optic made it a solid fit on the Shockwave. Luckily, the optic withstood the recoil without any interruption of service. 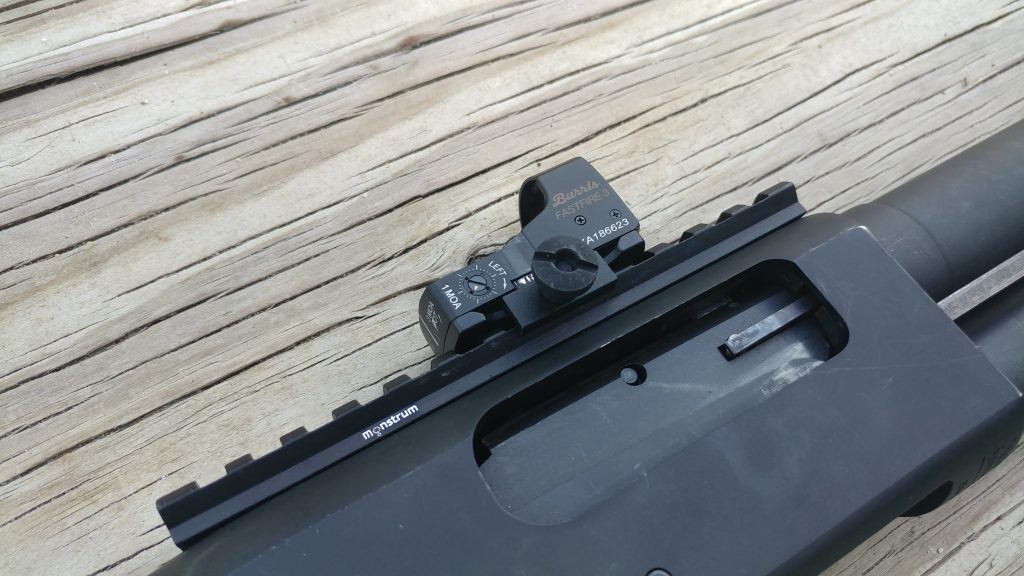 On each platform, I saw an increase in not only accuracy, but the ability to transition between targets was faster and more effective. Red dots also reduce the time it takes to go from a ready position to an on target position. The FastFire 3 simply makes shooting faster and straighter easier.

Burris has a lot of support for the FastFire 3 and his support has lead the Fastfire to become a modular, do all optic. Burris, of course, has Picatinny mounts, but they also offer mounts for guns without rails. This includes the Marlin 336 lever gun, the Super Blackhawk Hunter, and mounts for semi-auto guns that replace the rear sight. 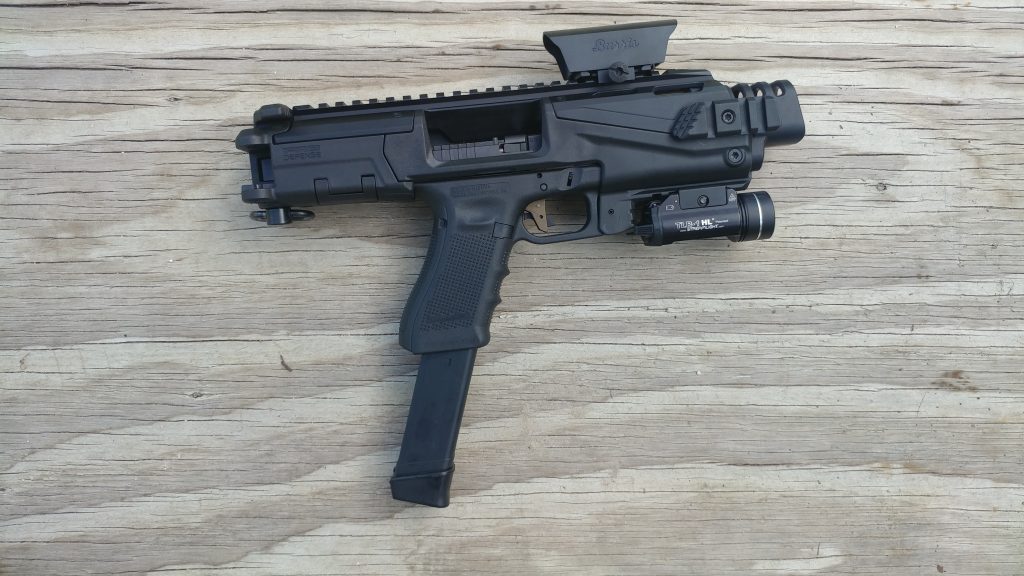 On top of that, they offer a nice Picatinny rail with two wings on the side to provide extra protection to the optic. There is also a mount that allows you to mount the Fastfire 3 to a magnified optic as a backup.

Lastly, my favorite is the SpeadBead mount. This mounts between a shotgun’s stock and receiver and allows you to mount a FastFire is a very low manner. It replaces the need for a bead sight with a red dot, and this system isn’t dependent on your gun to be drilled and tapped for optics to function. 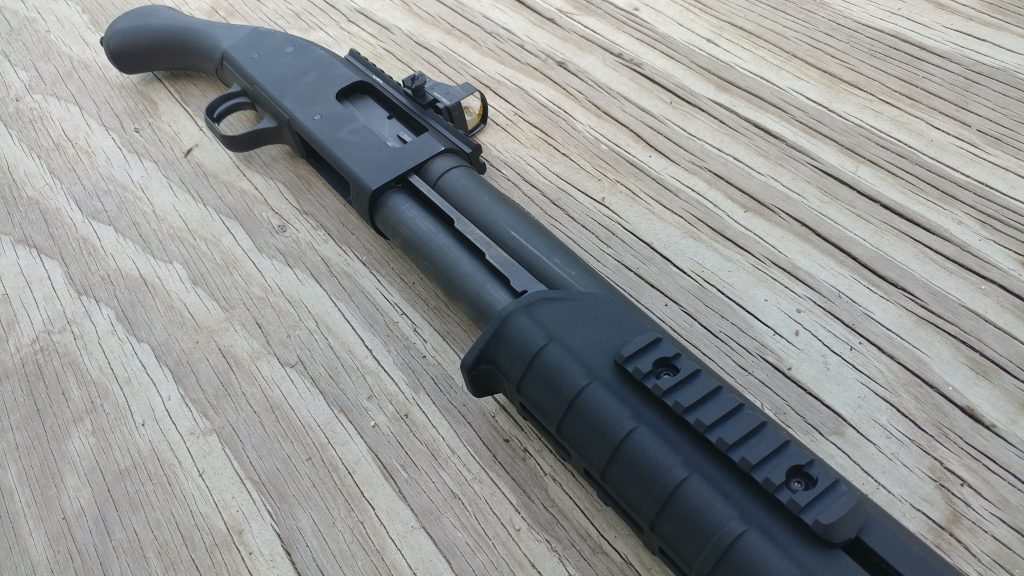 Overall the FastFire 3 is the perfect beginner’s miniature RDS. It’s strong enough to resist recoil and typical abuse, but priced low enough for the entry market. Its modular nature allows you to swap it from gun to gun with ease and if you don’t mind re-zeroing and mounting you can have one optic for many purposes. 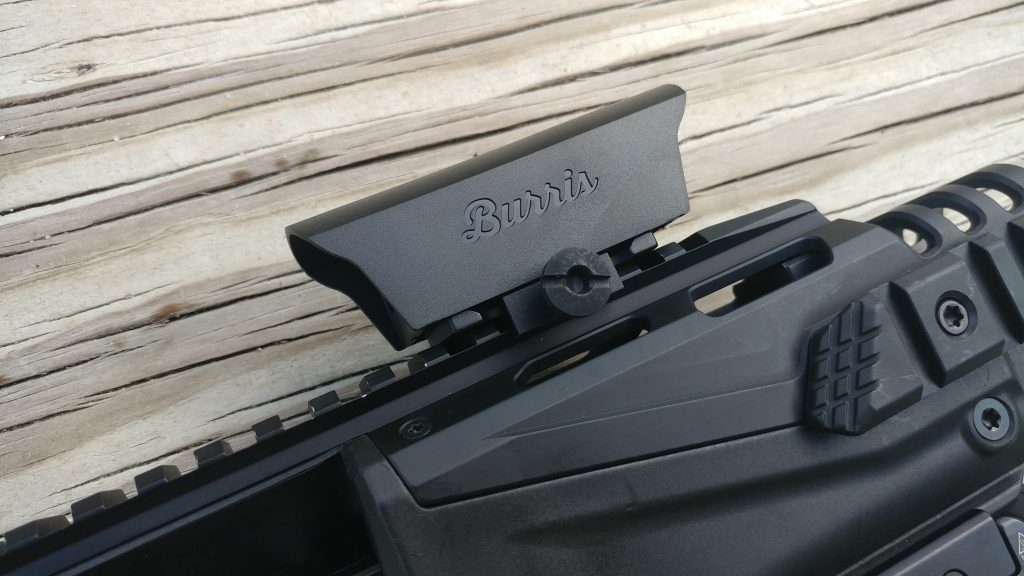 The FastFire 3 is a rock solid optic and a great overall choice. It won’t be the choice of police and soldiers but for most of us its more than enough.