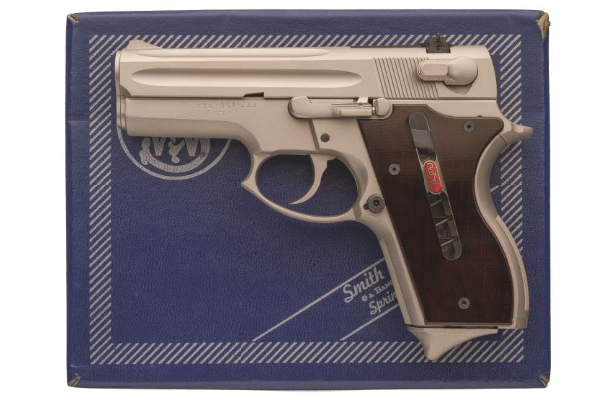 In 1976 a gunsmith from Cleveland, Ohio, placed an order for an ASP pistol. The ASP pistol was a design made by Paris Theodore that was a very heavily modified S&W Model 39. Paris and his team designed the weapon to be as concealable as possible and smooth for an easy draw and for deep concealment. The man, Charles Kelsey, must have appreciated the craftsmanship. Sadly he never received his ASP, which created a competitor known as the Devel pistol.

Charles Kelsey must’ve been a little annoyed at not receiving his ASP. Still, he wanted one and was a gunsmith, so why couldn’t he just make one? Charles Kelsey teamed up with legendary firearm instructor Ken Hackathorn to create something known as the Devel pistol. It’s worth noting that there weren’t many micro 9mms on the market. Most small autos were .22LR, .25 ACP, 32 ACP, and .380 ACP and were typically made by Walther and Beretta.

This was an untapped market. Charles Kelsey might not be well known these days, but he is a rather impressive gunsmith who did a number of modifications to firearms like the Hi-Power that are well regarded. Devel became the company that fronted the gunsmith.

Charles Kelsey designed the Devel pistol to both compete with ASP and to improve upon the idea. He didn’t just want to make an ASP clone but to produce a high-quality pistol that would improve upon the idea of an ultra concealable 9mm pistol. While the ASP used an S&W 39, the Devel would use both a Model 39 and the double stack Model 59.

Kelsey would shorten the barrel, frame, slide, and grip. They’d have to trim the magazines to match as well. This reduced the Model 59’s capacity from 14 to 10 rounds, and the Model 39 featured an 8-round magazine.

Devel pistols feature micarta grips with a see-through window to allow the user to check their ammo supply. The slide was fluted to reduce weight, and it’s honestly a striking appearance. The barrel bushing is redesigned as a fixed part of the slide, which reportedly improved accuracy and reliability.

Kelsey would use an improved spring because the little gun was much different than the bigger versions. The front sight is ramp style that’s bright red for easy visibility. The hammer is despurred for extra smoothness. The magwell was funneled for faster reloads. The mainspring housing was completely replaced and not just a reworked device.

Devel pistols featured an enhanced magazine release as well as a checkered lower backstrap. The trigger guard was reworked with a hook added to it. Additionally, the gun features a bit of a relief cut into the trigger guard to encourage two-handed shooting. The safety was swapped to an ambidextrous design, and the magazine disconnect was removed.

The above description represents a Full House Devel pistol. A number of more affordable options are available with fewer fancy features, but the Full House understandably gets all the attention.

If you take a peek at the Kelsey pistols and then look at the S&W Third Gen guns, you will see some very familiar features. In fact, I would argue an S&W 3rd Gen looks more like a Devel than an S&W 2nd gen. Look at the 3913. It’s a less fancy version of the Devel gun.

The trigger guard on the 4506 looks like Charles Kelsey designed it…because he likely did. Several certified gunslingers own the Devel pistols. Specifically, Rex Applegate owned one, and it’s a beautiful pistol.

The End of Devel

Eventually, the company folded. He designed and produced an 8-round 1911 magazine, and the magazine ended up failing. Charles Kelsey was an honorable man and spent a fortune refunding those customers with bad magazines. Devel had designed some 1911s and custom Hi-Powers as well that are very well regarded.

Charles founded a second company called Leved to work on some small projects, but sadly he is no longer with us. If you’d like to see some of Devel’s guns, check out the Novak website. Wayne Novak is probably the premier Devel collector, and his website has some beautiful photos of Devel pistols.

Sadly the Devel guns just aren’t as well known, and they deserve some credit. The Devel guns had a number of features we still see popping up today.