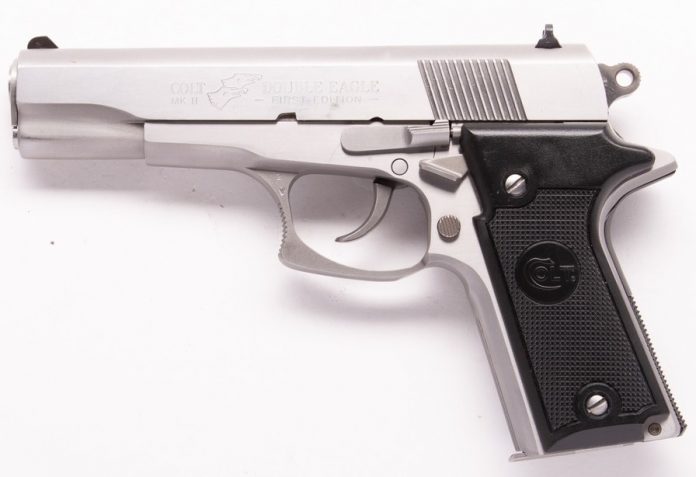 The Eagle has landed: Colt billed the Double Eagle as using a “state of the art shooting system” that brought a double-action and “large-bore punch” when the gun hit the market in 1989.

With a double action and styling built to compete with Smith & Wesson and Ruger, Colt’s Double Eagle pistol series had high hopes.

By the late 1980s, Colt had been in the revolver business for over a century and the makers of various M1911 variants since, well, 1911. However, at the time, the .45ACP-chambered single-action invention of John Browning was seen as dated in the police and personal defense “combat handgun” market when stacked against contemporary competitors such as the S&W 645/4506 or the various double-action/single-action (DA/SA) “wonder nines” of the era.

In response, Colt rebooted the M1911– why completely reinvent the wheel, right?– and made it DA/SA with a host of Reagan-era features like a squared-off trigger guard with serrations, black synthetic grips, and a matte stainless finish. The Double Eagle, in a nutshell, is an M1911 with different Xenoy plastic grips, an S&W-style trigger guard, and an updated double-action top half.

In the end, the Double Eagle shared a lot of M1911 parts, including the magazine, and lots of the same feel and surface controls although the grip is notably thicker. The Double Eagle has 55 named parts, three more than your typical pre-1980s M1911A1, although disassembly is largely the same. Notably, 80 Series Colt Delta Gold Cups have more parts than either. (Photo: Colt) The Double Eagle series had a distinctive logo with a pair of stacked eagle heads. Also, note the “Series 90” designation.

Standard on the Double Eagle line was a rounded combat style hammer spur, reminiscent of that seen on the Browning Hi-Power or Colt’s later Combat Commander, in lieu of the more traditional flat spur of the M1911 series. Also, note the slanted slide serrations which are further forward from a standard M1911, and the very different Xenoy plastic grips.

While Eagles are typically all-stainless, a small batch of two-tone guns was made by Colt with a blue finished slide over a stainless frame. Besides .45ACP, the pistols were made in .40S&W, 10mm, 9mm, and .38 Super, all of which are harder to find than the typical models.

While the standard Double Eagle used the typical M1911-length 5-inch barrel, there were also Combat Commanders with a 4.25-inch barrel, and Officer’s models with a 3.25-inch pipe.

In the end, the Double Eagle never really caught on for Colt and the line was closed by 1996, surpassed by increasingly popular striker-fired polymer-framed guns like the Glock.

Colt revisited double-action guns later with the All American (Model 2000), 90 Series Pony, the Pocket Nine, Czech-made Z40 and the Model O– but all were DAO guns, not DA/SA like the Eagle. All this further paints the short-lived Double Eagle into an interesting, albeit a very short, branch of the Colt family tree.

If you like interesting and often rare guns like these Colt Double Eagles, be sure to check out our Collector’s Corner or look through our entire catalog of more than 3,000 new and used guns of all sorts.