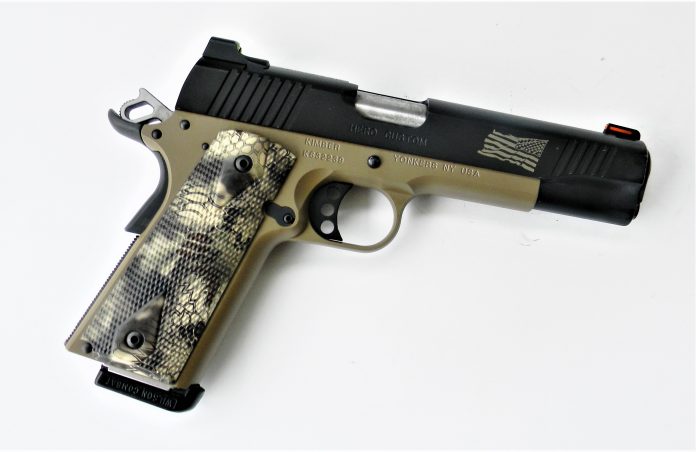 Among the best combinations of value, performance, accuracy and reliability is the Kimber Custom II.  Kimber rocked the world when they introduced this handgun decades ago. It was the best appointed factory 1911 in the world at the time.  The Kimber forced other makers to upgrade their 1911 handguns in order to remain competitive.

Kimber has earned an enviable place in the firearms world with the Custom II and other 1911 handguns. Some shooters and even old line gunsmiths criticized the Kimber as it was not ‘mil spec’ and did not accept the generalized parts used to upgrade the 1911. No, these parts don’t fit and the Kimber demands its own .22 conversion unit. The same criticism was leveled at the Les Baer handguns a few years later. When you improve a machine by tightening tolerances you increase performance. 1911 barrels, magazines and grips fit the Kimber, and in the event you really need and upgrade fitting isn’t difficult.

A few years after the introduction of the Kimber Custom pistol Kimber added a firing pin block or drop safety and called it the Custom II.  A recent addition to the Kimber line is the Hero Custom Model.

This is a pistol with special engraving and markings. Kimber will be making donations to the Boot Campaign based on sales of this model. The Boot Campaign helps veterans with quality of life and other struggles.

The pistol is well made and well fitted. The barrel bushing is tight but doesn’t need a tool for disassembly. Trigger compression is ideal for most uses at 5.2 pounds compression. The feed ramp is properly polished with the requisite 1/32nd each gap between the two halves of the feed ramp. The safety indents sharply. The grip safety properly releases its hold on the trigger about half way into compression.

I lubricated the long bearing surfaces of the pistol and collected a likely supply of ammunition. The pistol is supplied with a single magazine. I added a likely collection of Mec Gar and Wilson Combat magazines. I have fired the pistol with as wide a range of ammunition as possible during these times of shortage and panic buying. Among the most accurate loads has been Federal’s American Eagle 230 grain FMJ loading. This is a consistently accurate loading with a clean powder burn. I would not hesitate to engage a threat with this load it is a hard hitter. I have chosen the Speer Gold Dot 230 grain hollow point as the carry load. After proofing this pistol I carry it often. The Gold Dot loading is a bonded core that has been chosen by many agencies as a general issue loading. The Gold Dot has a good balance of expansion and penetration and is more accurate than most loads.

The pistol handles like most 38 ounce 1911 handguns. Recoil is modest. There is no pistol faster to an accurate first shot than a Government Model 1911. Draw, get on target, line the sights up and press the trigger straight to the rear and you have a hit. As the pistol recoils let the trigger reset and fire again after the sights have been re-aligned. The pistol is controllable. The Kimber trigger and excellent high visibility sights make for high hit probability. I didn’t expect anything else but the sights especially are attractive and useful for speed shooting. Firing off hand at small and large targets at known and unknown ranges is a better test of practical combat accuracy than firing off a bench rest. The Kimber Hero has practical accuracy. I have fired several two to two and one half inch groups with the pistol, firing three shots from a braced position at 25 yards. This is a formidable handgun and a fitting tribute to those who served.

Magazine capacity      7 or 8 round magazines