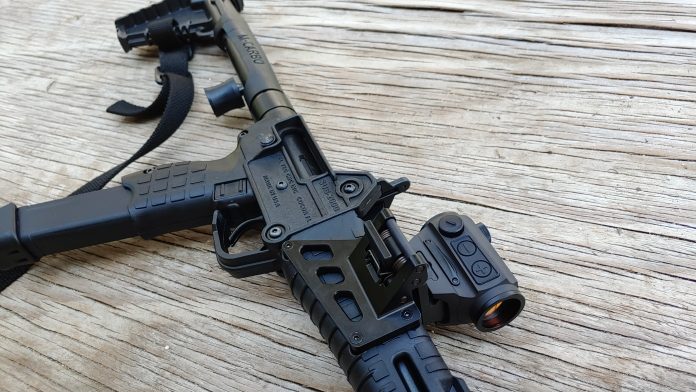 The KelTec Sub 2000 is just one of those guns. It’s unique and interesting, and that’s why it sells. It’s not a particularly ‘good gun’, but the unique folding design, reliable blowback action, and affordable price tag make it popular. It’s a popular weapon but has a limited aftermarket, and in that limited aftermarket, a company called MCARBO rules. MCARBO goes to bat with some of the best upgrades available for the platform, and they vary widely.

They make tons of good stuff, but two upgrades that stand out to me are the optic’s mount and the recoilless charging handle. These two upgrades completely transformed the Sub 2000 into a much more modern and comfortable weapon. While today we are going to focus on the optics mount and charging handle, the MCARBO upgrades are fantastic all around. You can upgrade your sights, your trigger guard, the deployment latch, and so much more. Check ’em out.

Adding an optic to a gun that folds in half turns out to be a major pain in the ass. As we all know, a good PCC is well equipped with a red dot optic. Users were left with choosing between using an optic or being able to fold their gun until MCARBO released a rather ingenious optic mount solution. 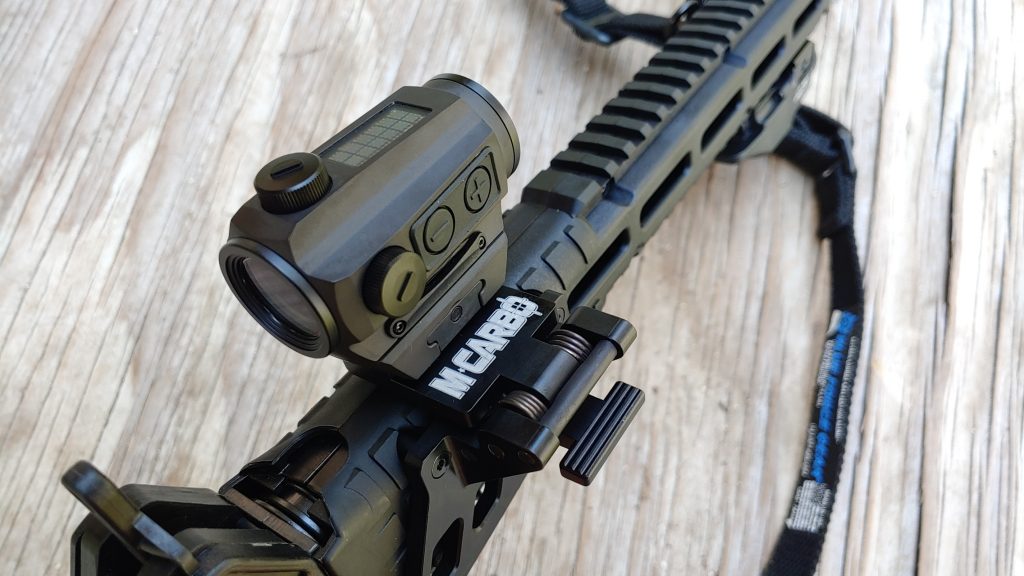 It bolts to the barrel side of the weapon and mounts the optic to the area where four bolts hold the handguard onto the gun. MCARBO includes four extended bolts to replace the stock bolts and to bolt the optic mount to the gun. The optic’s mount uses a short Picatinny rail that’s sized perfectly for a compact red dot. 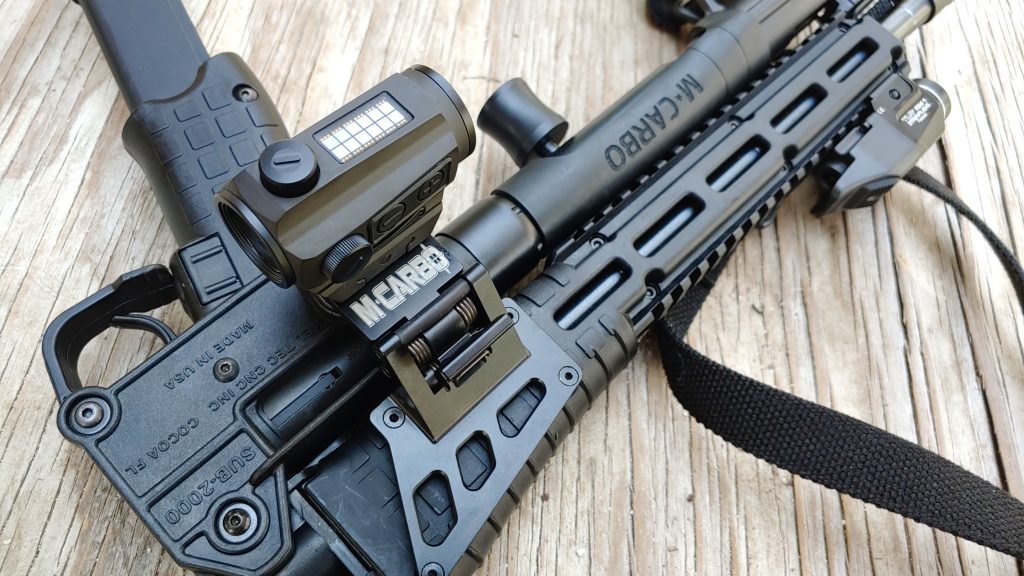 That section of Picatinny rail flips out of the way with the press of a lever. Once out of the way, the gun can then be folded and stored like usual. The rail is long enough to mount an Aimpoint micro-sized optic or a pistol-sized open red dot sight. The optic’s mount places the optic perfectly for the ability to co-witness with the iron sights.

This means the optic needs a low mount, and it has to sit extremely low, so it’s a little tough to get a nice comfortable cheek weld to use the optic. If you don’t mind losing the cowitness ability, you can use a higher amount and push the red dot a little higher on the gun. 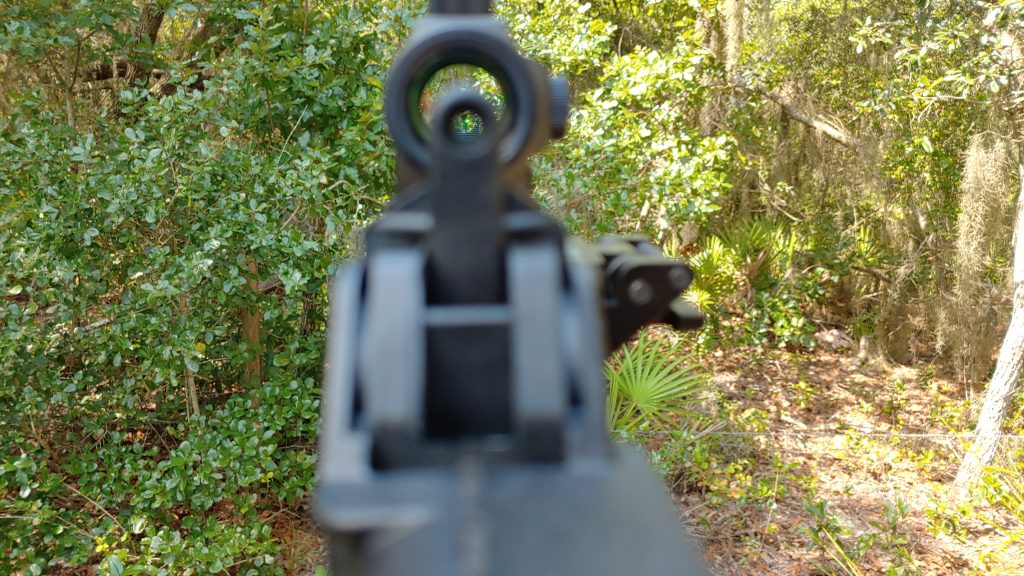 Once it’s equipped and zeroed, you feel the difference instantly. Red dots make it so much easier to get on target and make it easier to shoot further. The glowing bright dot is quick and easy to find and to track between targets as you transition from one to the other.

MCARBO designed the charging handle to be dummy thicc. Not only is this charging handle easier to grip, but it weighs 3.2 ounces. That extra 2.2 ounces it adds to the bolt of the gun helps reduce recoil. The KelTec Sub 2000 is a direct blowback gun, that’s essentially a high-quality Sten gun.

It’s a tube, a heavy bolt, and a spring. This system is very reliable but adds more recoil to a 9mm carbine. The addition of a few ounces of metal does wonders to reduce recoil. 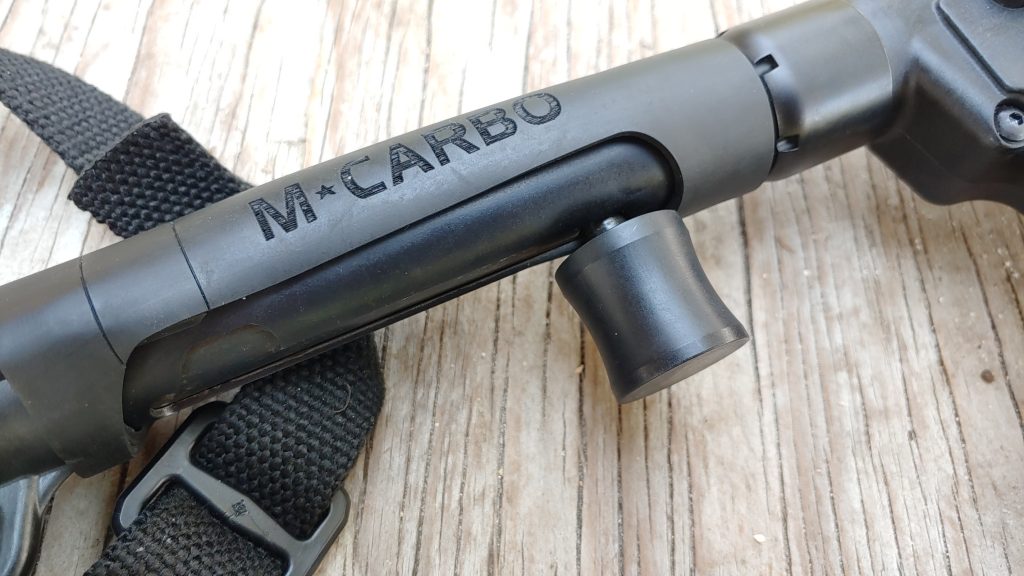 I’m not gonna lie; I didn’t buy the hype. How much could 2 ounces of weight really do to reduce recoil? Well, I ate crow, and the MCARBO recoilless charging handle did absolute wonders. It slows down the heavy reciprocating bolt and greatly reduces recoil. The Sub 2000 was never a shoulder bruiser, but it feels like it has some snap to it.

The addition of a simple fat charging handle made the gun handle so much better. You feel an instant difference to the gun, and it’s much more enjoyable than the stock Sub 2000. Combined with the MCARBO optics mount and a red dot, your KelTec becomes much faster to engage with and to fire follow-up shots with. 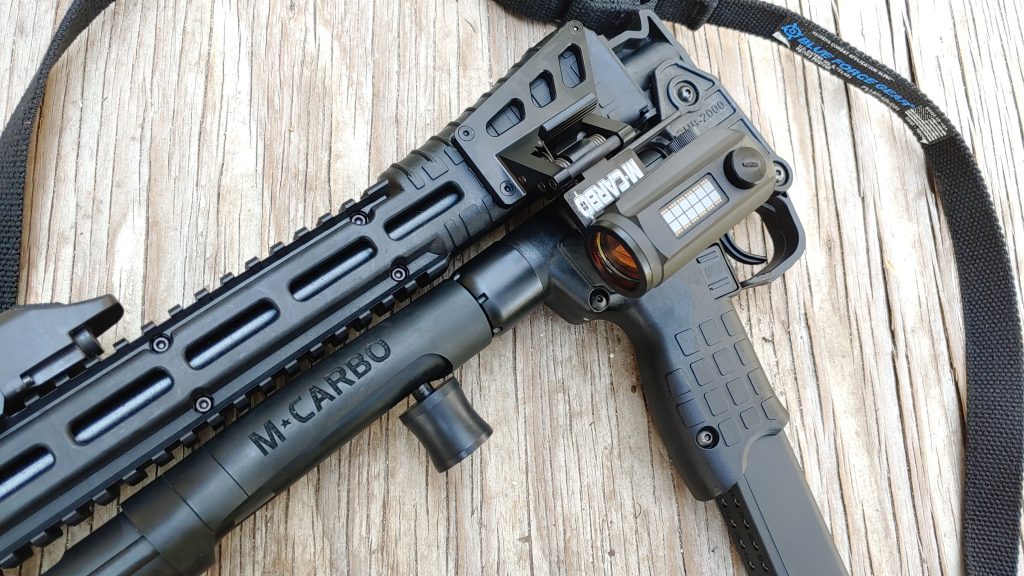 As a secondary effect, the MCARBO recoilless charging handle also makes the bolt easier to grip and pull. The hefty spring necessitated by the blowback action means the gun offers a lot of resistance when you try to work the action. The bigger charging handle is much more comfortable to rip and to get into play.

Two of the Sub 2000s biggest issues are solved with two upgrades from MCARBO. Lowering recoil and adding an optic makes the gun so much easier to handle and shoot and really opens up its potential. Both of these upgrades add bulk but the SUB 2K will fit into any AR 15 case. KelTec would be wise to team up with MCARBO and offer these as stock options on the Sub 2000. Til then, check out MCARBO here to find all the goodies you could ever want for your Sub 2000.