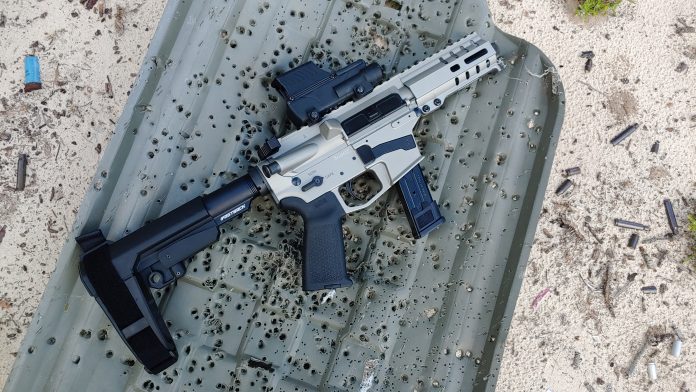 I don’t think it’s a big secret that people like PCCs. They dominate the market, and people like me eat them up. The majority of PCCs are straight blowback guns, and there is nothing wrong with that inherently. However, it does have it’s downsides. Whenever I see a PCC using something alternative to direct blowback, I get excited. The Banshee by CMMG is one such example, and the Banshee line of firearms includes various calibers, variants, and magazine platforms, and it recently grew by one, the Mk17.

The Banshee Mk17 is named because of the SIG Sauer M17 service pistol. You know, the P320 that won the MHS contest and is being adopted force-wide. The Banshee Mk17 takes P320 mags and is one of the first PCCs to do so. The Mk17 uses a rotary delayed blowback system that was invented and patented by CMMG. The rotary delayed blowback system utilizes a custom bolt that does resemble your everyday average 5.56 bolt.

If you look closely at the bolt lugs, they vary slightly from standard AR 15 bolt lugs. This allows them to rotate inside the chamber and create a delayed rotary design. This design offers a lot of advantages over traditional blowback operation.

First, the Banshee design can accommodate calibers ranging from 9mm up to 458 SOCOM reliably. We also get fun oddballs like the 5.7 and 10mm in a reliable carbine-action. 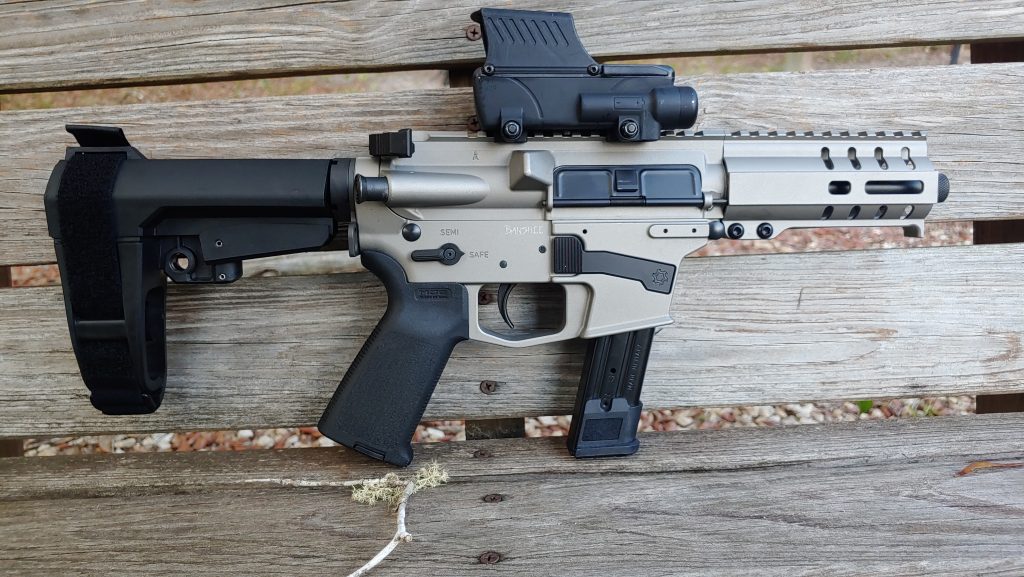 The purpose of the Banshee’s delay is to allow pressure to escape before the bolt cycles rearward. The rotary delayed system eliminates the need for heavy buffers, bolts, or springs. This makes charging the weapon and fixing malfunctions easier and keeps weapon weight lower.

Lastly, if you’ve ever fired a blowback PCC like the Scorpion, you may have noticed the recoil seems a bit much for a 9mm carbine. Blowback recoil isn’t bad, but a 9mm feels like a 5.56. The rotary delayed system reduces that recoil and makes it feel more like a 9mm and less like a full-powered rifle round.

CMMG’s Banshee offers similar ergonomics to the AR 15 platform. We must be specific here because there are several different series of Banshee. This is the premium grade 300 series. There also exists a 100 and 200 series that offer fewer features, but a lower price. 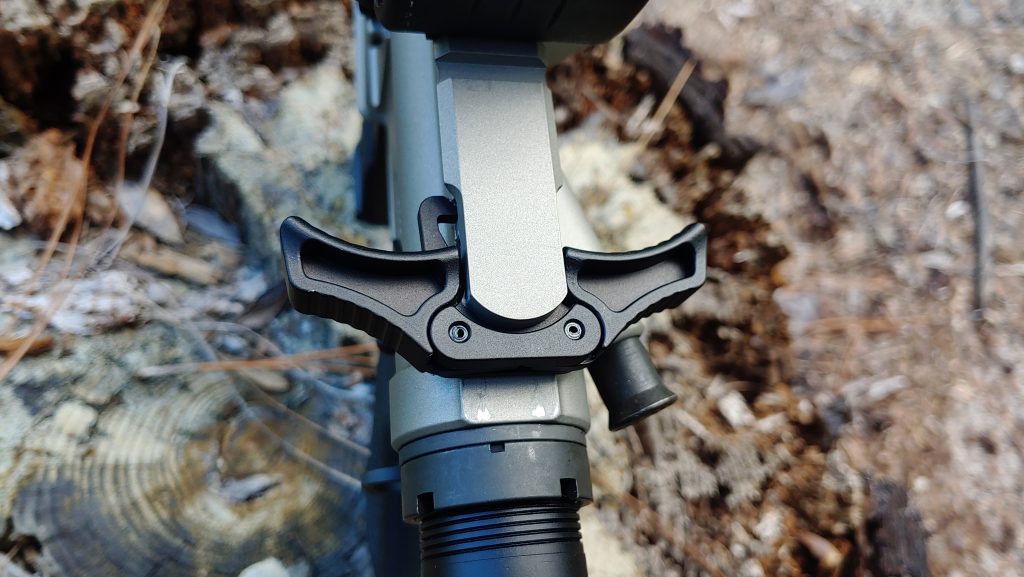 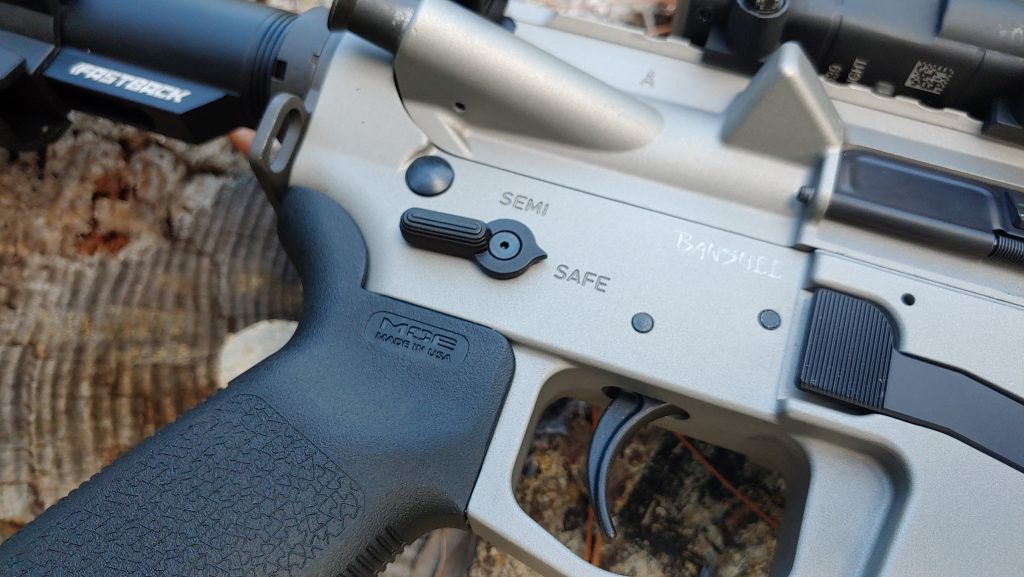 The magazine release is moved backward to accommodate easy reloading, and you can reach it with your trigger finger without swapping grips. Magazine releases can be a challenge with how pistol magazines lock into an AR lower, and CMMG figured it out well enough. 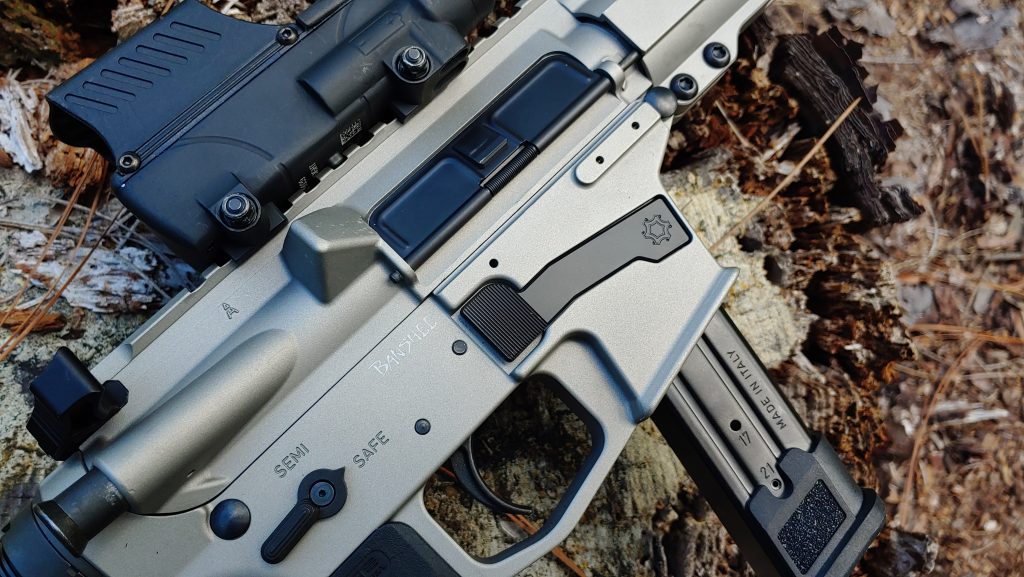 The Mk17 sports a 5-inch barrel with a slightly shorter handguard that offers enough room to fit your support hand. The handguard has a built-in handstop that’s clever, small, and looks great. It also keeps your hand from getting a hole in it. I do prefer a mag well grip on a gun like this, but the handguard is just long enough to work.

The Banshee Mk17 uses the CMMG Ripbrace. The Ripbrace is a modified SBA3, and it is the same five-position design, except that it deploys to your preset position with nothing more than a quick tug. You set the position with a set screw and can pick from any of the five. It’s great to grip, rip, and have the brace set at your desired length. 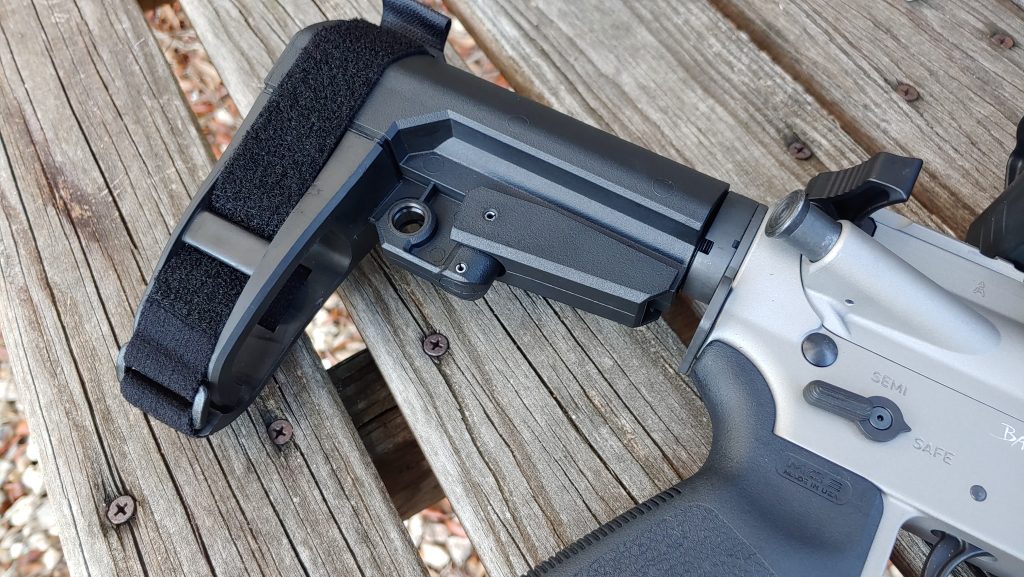 The gun is a short 18.9 inches with the brace collapsed and weighs a mere 4 pounds and 10 ounces. The Banshee Mk17 is superbly light and capable. It would be an outstanding home defense weapon, especially for those smaller framed, weaker, or less trained shooters.

Range Day with the Banshee

Ahhh, the fun part of the review. The Banshee comes with one P320 21 round magazine, and I think it needs to come with at least one more. Luckily I have extra because loading one at a time would be terrible. I tossed on my Meprolight Foresight to act as my optic of choice and started at 25 yards. 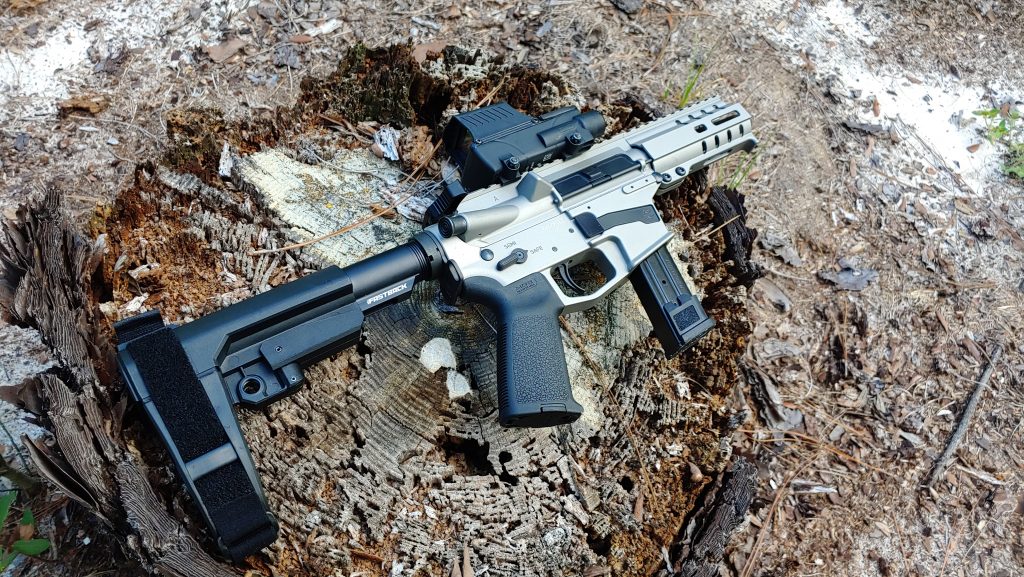 At 25 yards, this thing owns everything. It’s an absolute beast that drops rounds into one small hole measuring less than an inch. Inside of this range, you can easily hit the vital portions of a torso or to make critical headshots. It’s a superb shooter even out to 50 yards.

My groups were 2 inches on the large side at 50 yards from nothing more than a hasty prone position. You could still quickly ring a target’s bell without trying very hard. Going beyond 50 yards and out to 100 yards starts bringing in the effort associated with bullet drop. At 100 yards, there are roughly 12 inches of drop from a 9mm round. Not only that, but the round starts becoming a little less predictable. 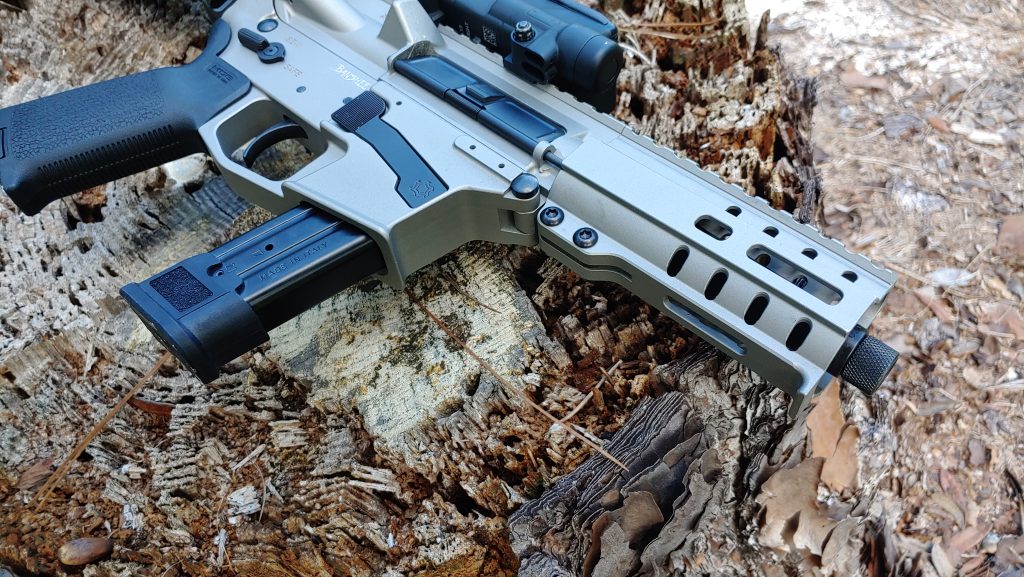 The groupings open up quite a bit, and I saw 5-inch groups at best. Pretty standard for a pistol round outside of its max range.

The Recoil of the Banshee 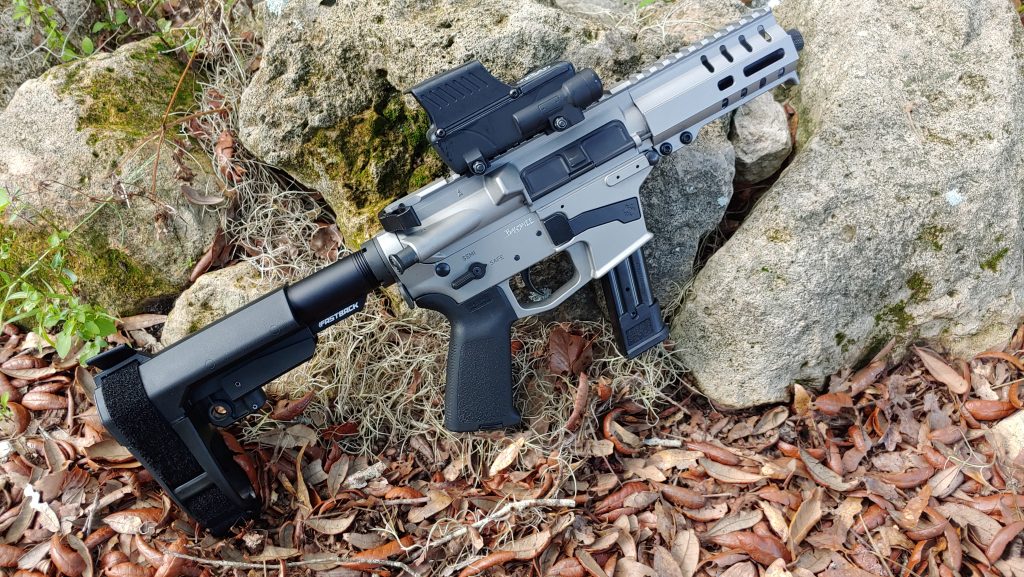 There is a big difference in the recoil between a standard blowback action and the rotary delayed system the Banshee Mk17 offers. The Banshee is a little beast that’s perfectly suited for home defense.

Does the Banshee Eat?

Ammo is on short supply right now, so I only have what’s in my stash. This includes a lot of Winchester White Box 124 grain FMJs and a good share of SIG M17 124 grain JHPs. The Banshee ate it all and did so with little effort. Not once did I experience a jam, misfire, fail to fire, failure to extract, eject, or anything else. The Banshee goes bang with every trigger pull. 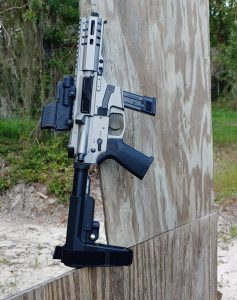 The Banshee is a lightweight, easy shooting gun that feeds from an up and coming pistol platform that will be around for a very long time. The Mk17 is a perfect new entry into a successful platform born to be short and light. It’s an expensive platform, but the quality makes it worth the price. My only complaint is that the gun only comes with one magazine.

That small complaint is one overshadowed by a competent and high-performance weapon. The CMMG Banshee Mk17 is a classy broad in a category of guns often occupied by plain jane operating systems. Give them a peep here, and you can see the Mk17, as well as models based on Glock magazines, FN 5.7 magazines, and more.