Dear SIG Sauer, why do you hate spaces. I feel super awkward typing Romeo1Pro, but that’s how you want to spell it. The new Romeo1Pro took the older Romeo1 and pushed it to be tougher, brighter, and easier to use. SIG made some subtle changes to the Romeo1. The changes were enough so that the older Romeo1 mounts are not compatible with the new Romeo1Pro. SIG’s M17 and M18 series of handguns were designed to accommodate a DeltaPoint Pro from Leupold, and SIG wisely decided that the Romeo1Pro would match the DPP footprint.

What’s New With the Romeo1Pro

The new Romeo1Pro fits DPP footprints, and fits perfectly on the M17/M18 series, the X series P320s, and all Pro-Cut slides. After GAT Daily Editor, Keith Finch, chastised me for not optically enhancing my SIG AXG Scorpion [Editor’s note: Seriously, I did.] I knew exactly where to attach my Romeo1Pro.

I strapped that bad boy on and applied a little Loc Tite to the screws. A top-loading 1632 battery ensures I don’t have to remove the optic to change batteries. Battery life tops out at 20K hours. To help preserve the battery life, the optic is infused with SIG’s MOTAC technology. When left still for two minutes, the optic will shut off automatically. However, as soon as it feels motion, it snaps back on.

It’s been lying on my table as I write, and for the longest time, I thought the MOTAC wasn’t working. Then I realized the vibration and slight movement caused by my typing is enough movement to keep it on. You can’t grab it fast enough to see any delay in the reticle springing to life.

On the left-hand side, we have two small buttons that control the optic. Users get ten daylight brightness settings and two-night vision settings. You can pick between a 3 or 6 MOA red dot. Mine is the smaller 3 MOA model.

The Romeo1Pro comes with a steel shield that fits around the optic for an optional higher degree of protection. I chose to use this steel shield since I’m often banging my holstered firearm on this and that as I run to and fro. A little extra protection does a body good.

That being said, the shield makes it a lot tougher to hit the optic’s buttons. I have to reach in and use the tip of my finger to make brightness adjustments. It’s not something I can do on the fly, and it takes a very dedicated motion to do so. I have big hands and sausage fingers, my wife’s more petite hands have no problems hitting the buttons, so it might just be me.

That Big Bright Dot of the Romeo1Pro

The Romeo1Pro provides a very bright dot. The new ‘point-source’ emitter provides a freaking bright reticle. That 3 MOA dot gets more than just daylight bright, it’s like white sand beach bright. Brighter than I’ll ever need it to be, even in the sunshine state of Florida. When you hit the brightest setting, the dot blinks five times to let you know you’ve made it to the top. 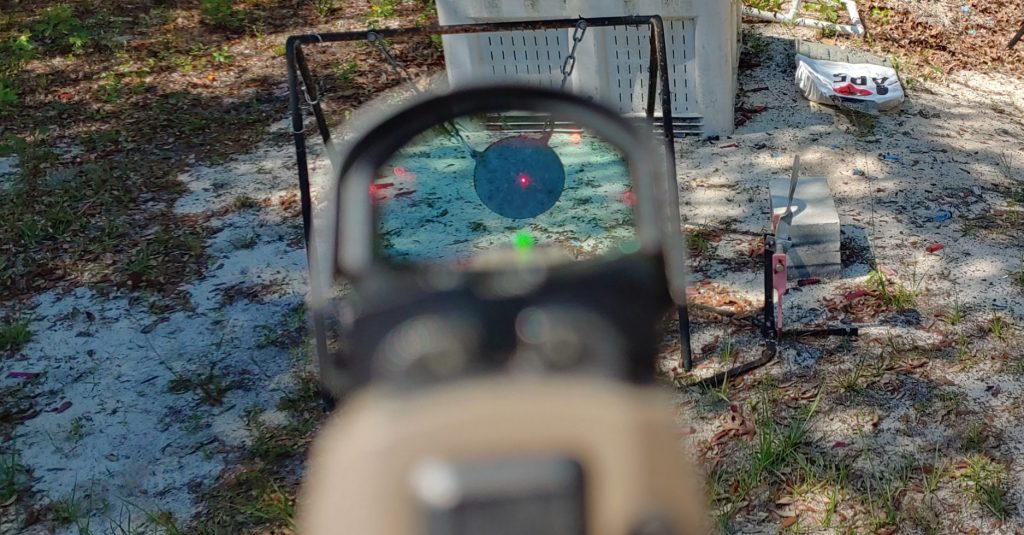 The rear of the optic features a sight channel which is nice, and once I get a new suppressor height front sight, it will allow smooth co witnessing. Looking through the Romeo1Pro reveals that big wide window we loved the Romeo1 for. A 30mm viewing window provides one of the largest mini red dot windows that I’m aware of. It’s massive, and a massive window makes the dot easy to find.

We also have a noticeably blue tint applied to the optic’s window. I used to think this was a clarity flaw, but I saw Aaron Cowan explain that the blue tint helped make the dot brighter while preserving battery life. It must have certainly helped the Romeo1Pro provide 4x the battery life of the Romeo1.

After a quick zero of the Romeo1Pro, I started with one of my favorite drills, the 10-10-10 drill. You can read about that here, so I don’t have to explain the whole thing. I’ve shot the 10-10-10 drill quite a few times and have gotten rather good at it. This was the first time I’ve shot it with the dot and with the SIG AXG. 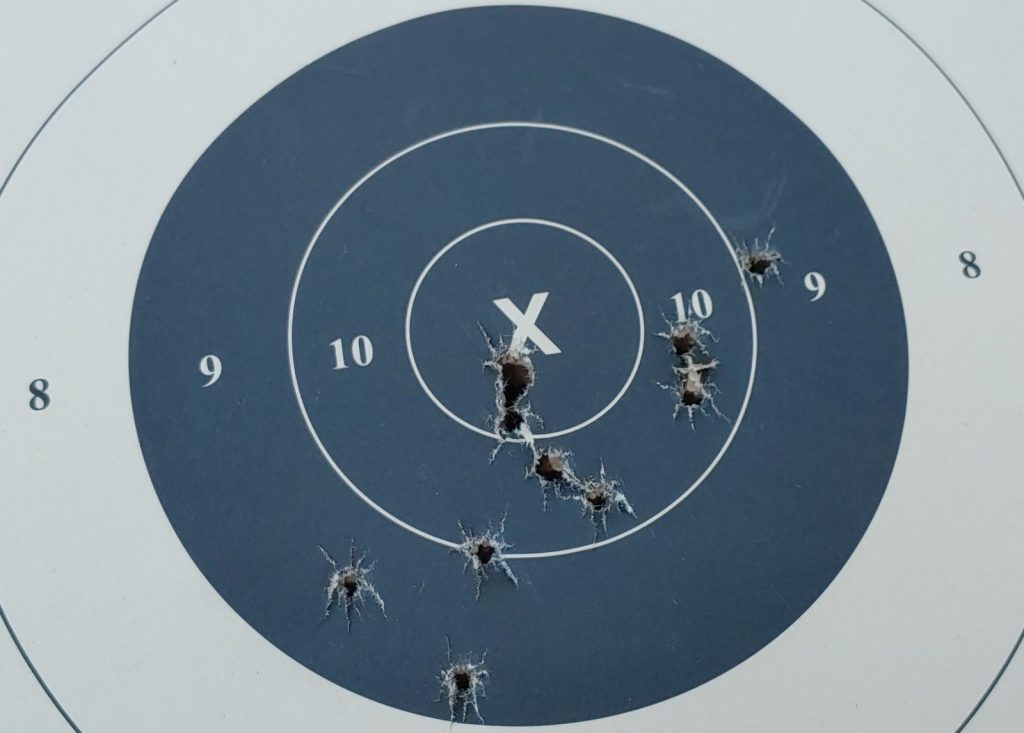 I ran it as fast as possible for my first run. Every round stayed in the black and scored a 5.67 par time. This is the fastest I’ve ever run the drill, and I’m not surprised since red dots make handguns so much easier to shoot fast.

It opened up my group a bit, and if I slowed down, I could be a bit more precise and did just that. My next run landed me a 6.49 time with 9 out of 10 in the X or ten ring and only one in the nine ring. I love red dots on my handgun, and the Romeo1Pro delivers the performance a handgun red dot needs. 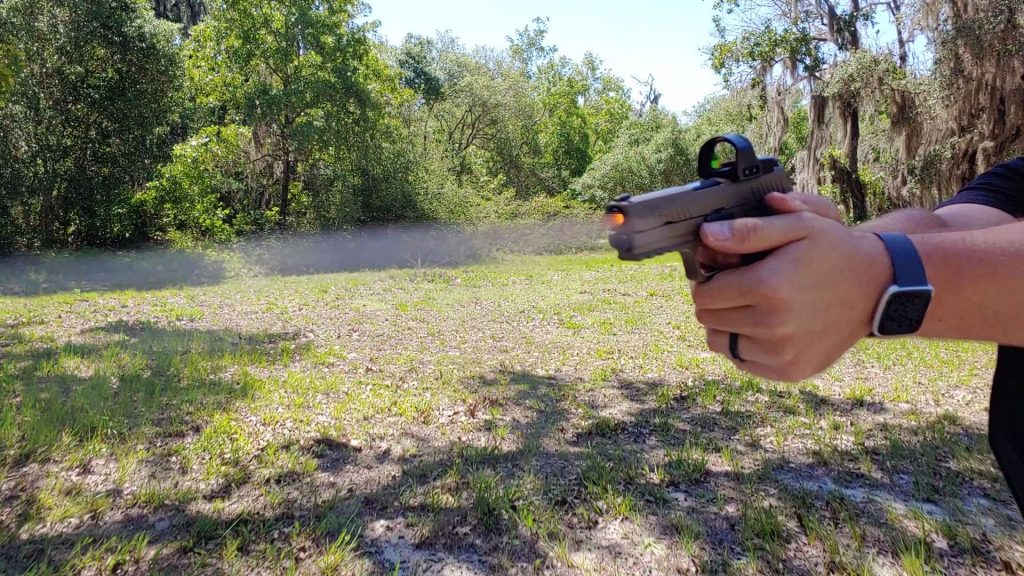 Even my slowest time was faster than my best time with iron sights and even more accurate.

At 50 yards I set up a B8 target. I fired five rounds in the standing position slowly and precisely. Could I have done better? Sure, but I feel satisfied with landing every round in the eight ring. Red dots on handguns make it so much easier to hit targets at these longer handgun ranges.

Upping the Round Count

I spent the rest of the day firing a wide variety of ammo types. We hit a few drills, fired from behind cover, and practiced one-hand and off-hand engagements. I blasted away at a round of dot torture and really love using a red dot for dot torture.

It’s so much easier to shoot Dot Torture clean with a red dot. At this point, we need a red dot variant of dot torture with dots half the size. The Romeo1Pro’s 3 MOA dot steers between dots and ensures you hit those two-inch circle-shaped bastards with ease.

After the next few days, I decimated plenty of paper, rung lots of steel, and watched my stash of 9mm slowly dry up as I got hundreds of rounds in. I’m almost out of steel cased 9mm at this point.

Down and Dirty With the Dot

Romeo1Pro dot appears super crisp, and only appears to starburst when the setting gets super high. I see zero stutter when transitioning from target to target as rapidly as I can. The dot doesn’t blur as it moves and stays crisp and clear. A crisp and clear dot allows for precision shooting, and lesser dots appear less like dots and more like stars.

Some cheaper dots stutter as you transition and kind of drag like a laser pointer. There were zero issues with reliability. The dot never turned off or stutter-stepped due to poor battery connection. 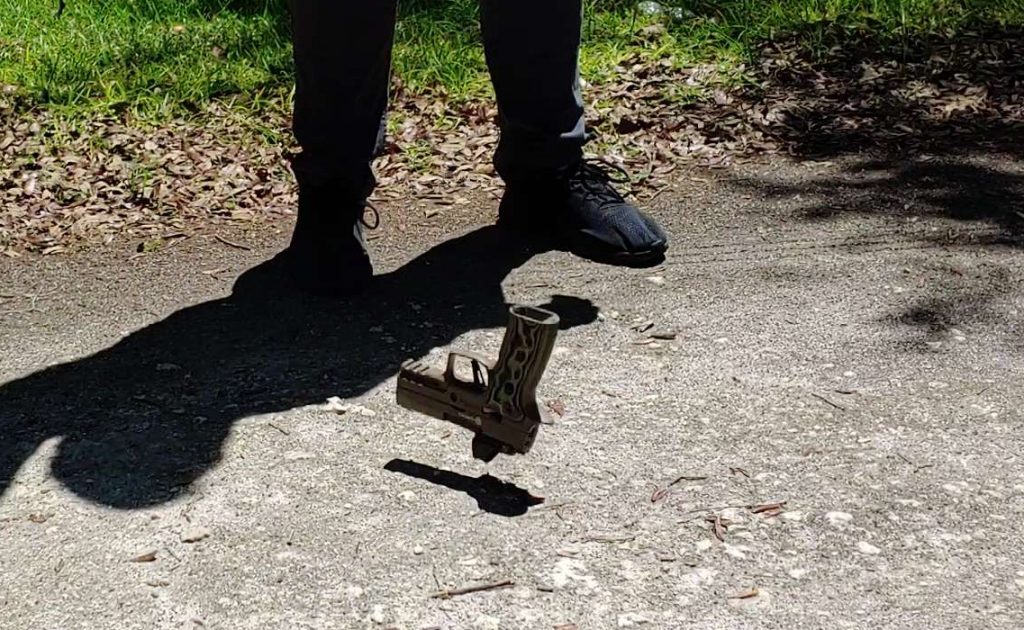 I even dropped it several times from shoulder height onto limestones. The finish didn’t even scratch.

The Romeo1Pro is a very worthy successor to the Romeo1. SIG seems to be intending this optic for the competitive market and their new American-made Romeo2 for the duty and concealed carry realm. This massive optic does its duty dilligently. It’s a big boy and seems well suited for rapid-fire transitions and small target engagement. It’s one helluva nice optic, and it will be living a permanent life on my AXG.