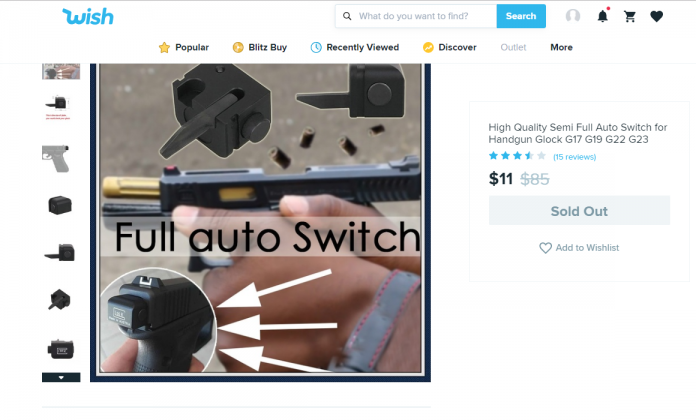 Do you know how China likes to rip off American, and international, Intellectual Properties? Well, if you ever wanted to buy these rip-offs direct from China, we have the Wish App and the Wish Website. Wish is a direct link to Chinese forgeries, as well as original items, oh and stuff that will land you in prison for ten years. Wish is a website and app that has become famous for its cheap goods, and in the gun world, it’s become famous because it sells items regulated by the NFA for pennies on the dollar. I get the temptation. Thirty bucks and bam, you can have a full-auto Glock. How would anyone know…?

To be clear, Wish sells lots of perfectly legal gun stuff, including rails, muzzle devices, foregrips, even holsters, and Bolt Carrier Groups. There is lots of stuff that steals from American gun companies, especially in the optic’s department. These optics and lasers and lights are not for actual guns and would likely be best suited for airsoft guns. I did a whole article on fakes here, check it out.

Do you Wish for a Felony?

Back to our Wish based felonies. The biggest and most prominent is the fact they sell full auto Glock switches. These switches are installed at the rear of the gun and are as simple as swapping the backplate out. Of course, the NFA is an infringement, as is the Hughes Amendment, but the law says no. These switches even have made in Austria and Glock markings to look legit. Unfortunately, these items are completely illegal. The ATF considers these parts to be machine guns, the same as a registered lightning link or auto sear.

How serious are they? Well, the ATF has found some way to receive records from Wish and to track these auto sears down. This started as early as Spring of 2019, and as recently as November 2019, they were still busting people.

Chicago recently arrested two people who purchased these machine gun conversions, as well and apparently, the ATF has records of over 2,500 people who may have obtained a full auto conversion switch.

Wish isn’t the only company doing this and selling these items. I’ve even seen them on Amazon advertised as Airsoft parts. Amazon seems to do an excellent job of quickly tracking them down and removing them. Some guy was even selling 80% lowers on Amazon as Wall Art at one time, so it’s not hard to deceive this massive retailer. Plus, eBay is likely a great place to sell all sorts of quasi-legal items.

Why the Glock switches have most certainly gained the most attention, they aren’t the only NFA item for sale on Wish. There is also suppressor parts, and even full suppressors. As you know these items are also regulated by the ATF. The ATF seems to be more concerned with machine guns than suppressors, but who knows what’s next on their list?

They also sell some items that could make another item an NFA item. This includes knock-off Roni kits and Glock stocks that can be legally used with a 16-inch barrel, like so. But without the barrel, they make your Glock an SBR and subject to the NFA. However, unlike the suppressor parts and machine gun parts, the ATF probably won’t track you down over them.

I hate the NFA. I think I should be able to buy a machine gun over the counter in 5 minutes and be on my way. Yep, that’s how it should be. I should have suppressors because I’m polite, and SBRs and SBSs without the ATF taking 200 bucks and approving a stamp.

As the law sits, that’s not the way. I don’t think anyone who bought one of these switches should be prosecuted for a victimless crime of owning a full auto switch. The problem is that they will be. They are being tracked down and thrown in a cage for doing something that harms no one. As the law sits, that’s the fate for the folks buying Felonies from Wish.

The way I see it, a big problem is for people who own guns who may not be gun people. They may not know how the law works and maybe purchasing these parts from what they assume is a legitimate source. If I go to a car dealership and buy a car, I’m trusting it’s not stolen or a crime because I’m purchasing for a dealer operating in the open. However, ignorance of the law is no excuse. Hopefully, articles like this can spread the good word and keep you from being on the wrong side of the law.