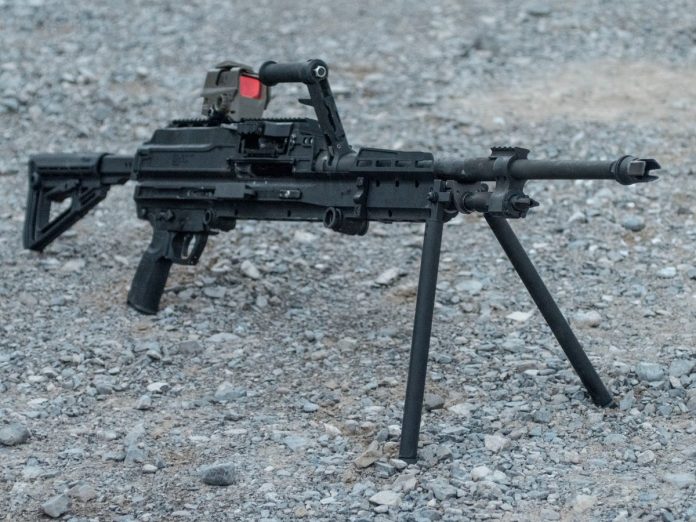 SIG has made a splash with the release of their new SLMAG. The SIG LMG was at SIG’s range day during SHOT. I wish I could’ve attended just to see this gun run. If you can’t tell by the title I am a Marine Machine Gunner. The Marine Corps is unique in that they assign specific MOSes and have specific MOS schools for Heavy Weapons users. I served in a line company for 5 years as a Machine Gunner. I loved my job and I love machine guns so I keep an eye on new MGs. The SLMAG was at their booth at SHOT and I could make a few personal observations, and I’ve been paying close attention to the info as it leaks out.

The SGLMAG or SIG Light Machine Gun looks like a medium machine gun, but the terms seem to be flexible. The SIG LMG was made to potentially fulfill a SOCOM request for a gun lighter than the M240 but potentially more powerful. The SIG LMG at the SHOW was chambered in the potent 338 Norma Magnum, but also comes in 7.62 NATO and SIG is tooling up to make a version in a 6.8 caliber.

My Observations of the SIG LMG

From the outside looking in I see a few things I really appreciate and some I don’t understand. As you can see the gun is optic’s ready with a rail over the top of the receiver. That’s great, but can be tricky on belt fed weapons. The M240 has a rail, but the entire top of the weapon is the feed cover. The way it opens puts longer optics at risk of colliding into a potentially very hot barrel. Trijicon came up with a spring loaded top cover attachment for the M240 that would fling the optic to the side as the cover opened. It was terrible.

Overall I don’t like day optics on a machine gun outside of a red dot or holographic sight, but that’s a whole other rant. The SIG LMG has a much shorter feed tray and top cover that allows the majority of the top of the gun to be stationary when the cover is opened. You can mount optics without the risk of the optic hitting a hot barrel.

In terms of sights, the gun is optics ready but seems to lack iron sights. This is an odd decision, but will likely be remedied if the gun is to be adopted by the military. The placement of the safety and the fact that its basically an AR safety is a great idea overall. The pistol grip looks ergonomic a AR 15 grip, which works. Lots of AR 15 parts on a gun that doesn’t have a AR 15 lower receiver.

The folding AR stock seems to be a dumb idea. A machine gun needs stability to be worth a damn and the wider and bigger the stock is the more you can dig into it. The M240 stock is odd, but damn does it work. This isn’t an M4 and it needs a dedicated MG stock, especially for bipod only use.

I humped an M240 on foot in Afghanistan, in countless hikes in the states, and in training. Guess what? It’s not a fun weapon to carry. Not just because of the weight but because its sharp angles and being superbly awkward. Designers seem to make these guns with a “It’ll be mounted mentality,” and that’s dumb. The SIG LMG seems to have less sharp angles, but it still looks like a pain in the ass to carry. Such is life with belt feds.

From reading about the gun I see a number of features I can appreciate. The gun can be fed from the right or left hand side. They kept the gun weighing in at a trim 20 pounds, which makes it 8 pounds lighter than my beloved M240. The SIG LMG can swap the charging handle to left and right, the safety is also ambidextrous. This will be an easy gun for lefties to use.

The Army Times is reporting a drum will be developed and they make it sound like a magazine. I’m wondering if they meant a drum more like a cloth or plastic drum that just holds the belt rather than a magazine style. The gun can be easily suppressed and the gas can be adjusted for suppressor use. This will be great for maintaining control over the guns from a squad leader or platoon commander perspective. My MG team had an entire signal system in case things were too loud for issued commands.

The gun can be loaded with the cover either closed or not fully opened according to the Army Times. This is important for low profile and quieter loadings as well as using the gun in cramped environments where the top cover can’t be opened.

According to Recoil Magazine the SIG LMG will have less recoil than the standard 7.62 NATO round. Supposedly felt recoil will be 4 foot pounds into the shoulder and that’s only twice as much as an M4 in 5.56. That’s great too, and this may make the use of a puny AR stock acceptable.

What About the Tripod?

The effective range with a skilled gunner on just bipods is about 800 yards and a new round and optic isn’t going to affect that much. What would is a tripod, preferably a more modern model. It seems like the Army is pushing a ton of innovation into the platform and not into the gear needed to take advantage of it.

The M122 Tripod works, and proves a tripod will allow you to reach out beyond 1,000 yards. The problem is the M122 is essentially the same design as the tripod used with the Browning 1919 machine gun. You know, the machine gun we used nearly a century ago.

It works for defensive positions, but isn’t designed for the modern wars we find ourselves in. It’s heavy, hard to carry, slow to use, and it can’t keep up. I never carried one in country and never would. By the time we got it set-up the fight would’ve already moved.

A new tripod would make the most out of this gun. A lighter, easier to use tripod that’s just as stable as the M122.

The SIG LMG is a good step forward for machineguns. The lighter weight, smaller controls, and top cover are all excellent additions to the machine gun world. I still think a proper buttstock would be better, but what do I know? The only gun I’ve ever built is a AR 15 with an 80 lower.