The Sentry 12 Not Your Normal Shotgun

Your carbine feeds from a detachable magazine, as does the Sentry 12. Users get two five-round magazines with the gun, with eight-rounders currently in development. As an American-made weapon, there are no 922R considerations to deal with, so magazines have no limits in capacity beyond practical size requirements. 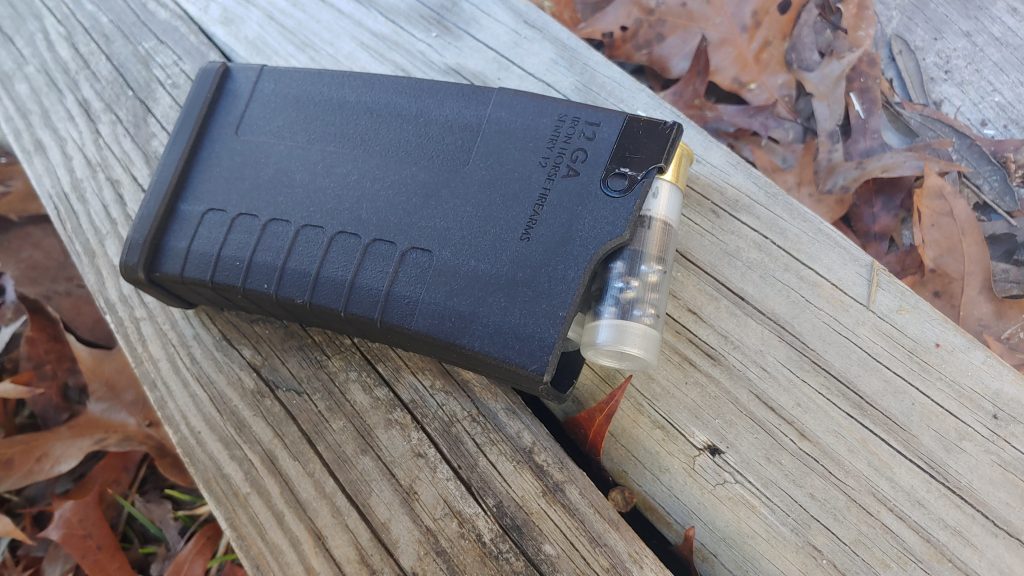 Ergonomically, the Sentry 12 is very AR-like. The inline stock and pistol grip design are just the beginning. The magazine release and safety mimic the AR15 rather well. Also, all controls are ambidextrous, which is rather rare for a shotgun. 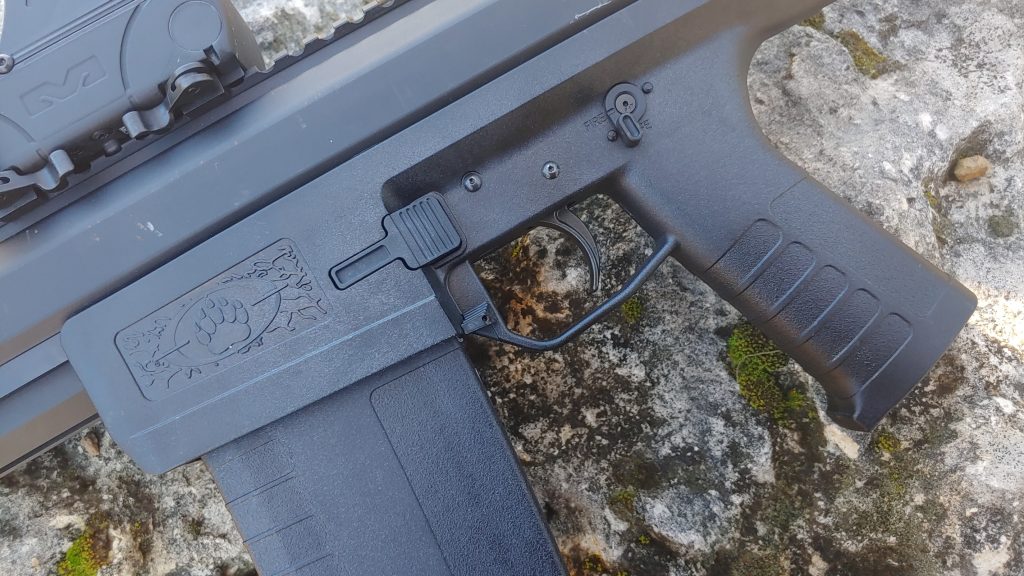 Shotgun manufacturers have this obsession with sporting length stocks on tactical weapons. A 14-inch LOP is great for a bladed sporting stance but not great for a squared-up modern shooting stance. The Sentry 12 has a short 12.5-inch length of pull that allows for that squared up, weight forward shooting profile. Moving from a modern carbine to a Sentry 12 feels quite natural. 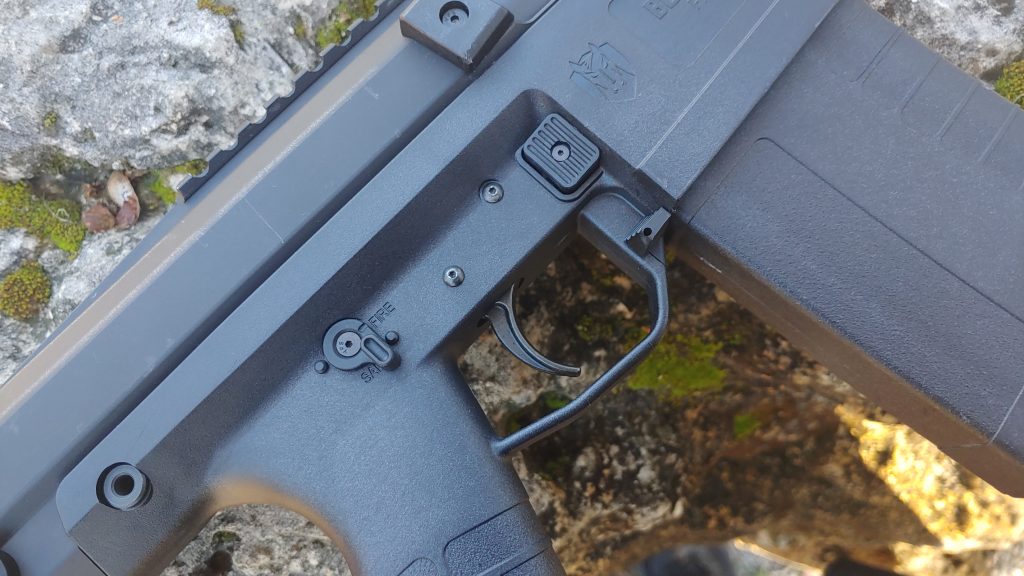 Taking the gun apart is simple and is also very AR-like in its use of lower and upper receivers as well as take-down pins. Coming in at 6.5 pounds, the gun is also carbine-like in its weight. The monolithic upper offers a full-length optics and accessory rail. Toss a good red dot on it, and it will feel quite carbine-like.

Shotgun magazines can be finicky and be nearly impossible to load with ease. Luckily, that isn’t the issue here. These five-round polymer magazines with metal feed lips are easy to squeeze shells into. The gun and mags accept either three or 2.75-inch shells. I’ve been shelling out (get it) on imported buckshot lately, so I’m pumping nothing but Sellier and Bellot buckshot through the gun. 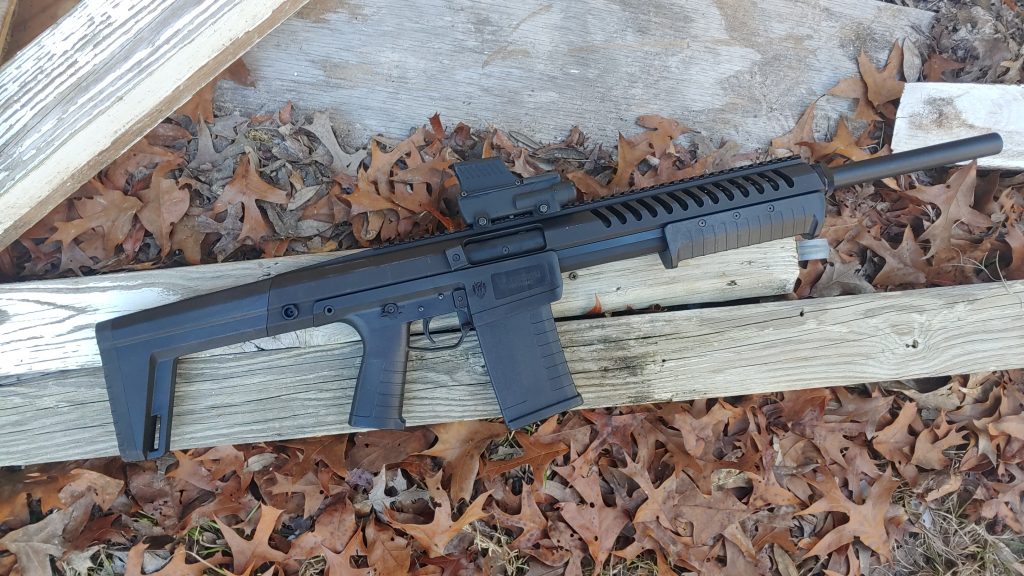 One little feature I enjoy is the fact the magazines load with ease on a closed bolt. Lots of mag-fed shotguns cannot accomplish this feat, and it’s a must on a pump-action design. Having to ensure the bolt is fully to the rear to load a magazine is a major hassle and something I’ll often forget to do against a timer. 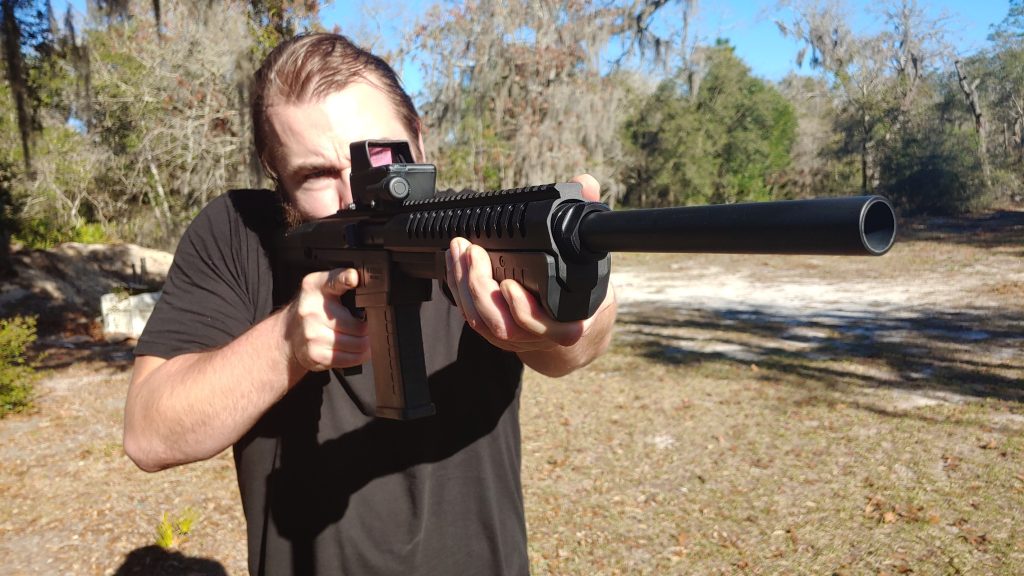 The pump action is quite smooth and glides forward and rearward without grit or any jank to it. Smooth becomes fast, and speed is key with a pump action. Reaching the pump is very easy thanks to the short LOP and the slightly shorter than average pump length. The short LOP, short reach to pump, and lightweight makes it comfortable for a wide variety of shooters, both big and small.

Loaded with a few hundred rounds of buckshot, I hit the range and had my fun. I like to shoot fast, and that’s rather easy with the Sentry 12. You could empty five rounds in very short order, and reloads are also quite fast. Toss another mag in and get shooting! These reloads would be a lot faster if the magazines dropped free. Instead, the user is going to need to remove the empty mag and insert the fresh mag. 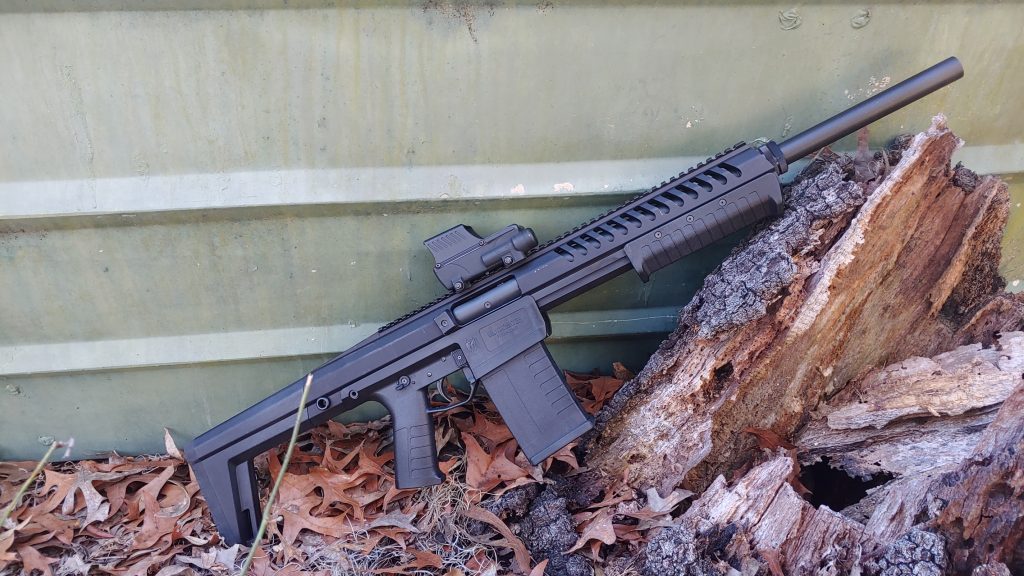 This is where the bulky shotgun mags will be a little less loved. You gotta have big hands to hold a fresh mag while trying to finagle the empty mag out of the gun. It’s possible with practice but not as intuitive as a carbine. Still, it’s faster than shoving rounds one or two at a time to load a shotgun’s tube. As a fun side note, the magazines fit in a BFG Ten Speed 308 magazine pouch, just so you know.

Lightweight can mean heavy recoil; however, with good recoil mitigation techniques, it’s no worse than any other pump-action shotgun. It’s nowhere near as smooth as a semi-auto but completely controllable with full-power buckshot. Push/pull the dang thing, and you’ll be fine. 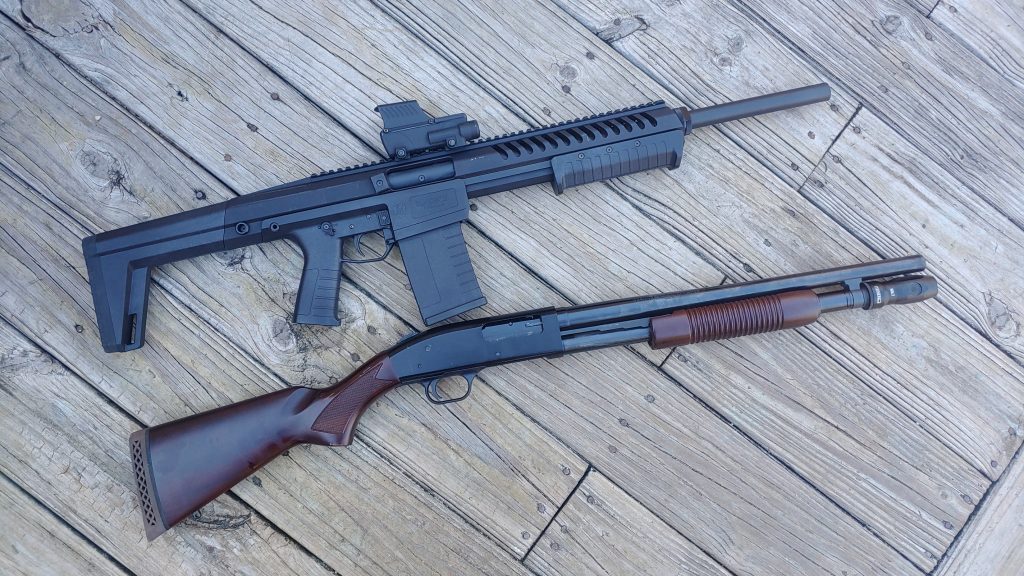 The gun eats without issue. Pump actions are hard to mess up, and this one runs extremely reliably. The magazines feed without issue, and it cycles a wide variety of ammunition perfectly. High brass, low brass, buckshot, birdshot, it doesn’t matter, the Sentry 12 doesn’t care.

The Sentry 12 shotgun patterns predictably and uses a cylinder bore choke. A headshot at 10 yards puts every pellet in the face of the bad guy. Body shots out to 25 yards are quite effective. Toss in a high-quality load like FliteControl, and it tightens up significantly while expanding your range. 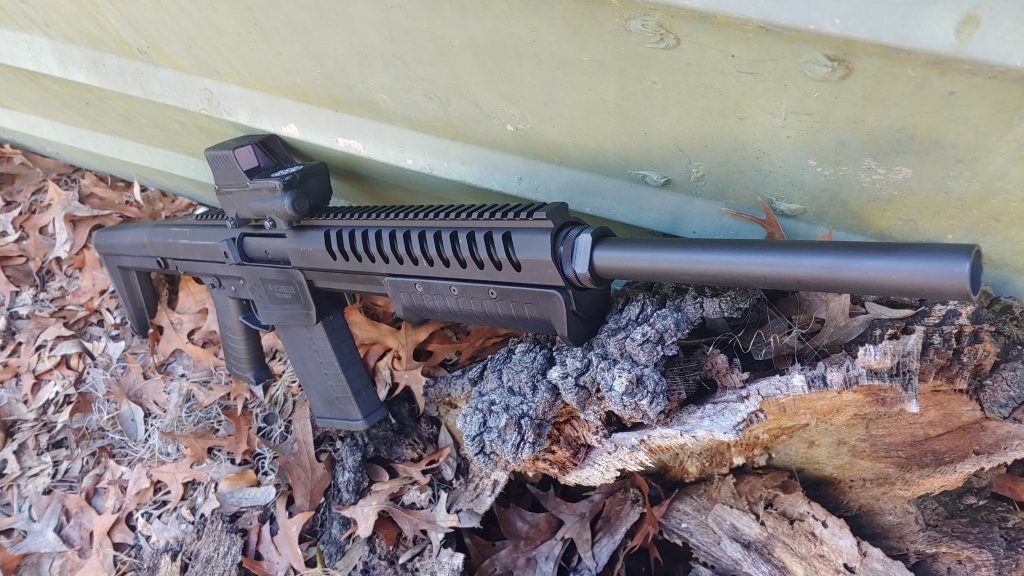 The short and compact design makes it very well balanced, and it handles less like a shotgun and more like a rifle. Shotguns are all about swing, but that’s not the case here. You move it and use it like a carbine, directing its intention more than swinging it on target. With a regular shotgun, a lot of your shooting is done with a target focus and almost instinctually as you come on target.

With the ammo placed in the center instead of a magazine tube, the Sentry 12 doesn’t have that same momentum as it swings. Handle a Mossberg 590A1 side by side with the Sentry 12, and you’ll feel the difference the design makes. It’s a readjustment, but not necessarily a bad thing. It’s a different thing. 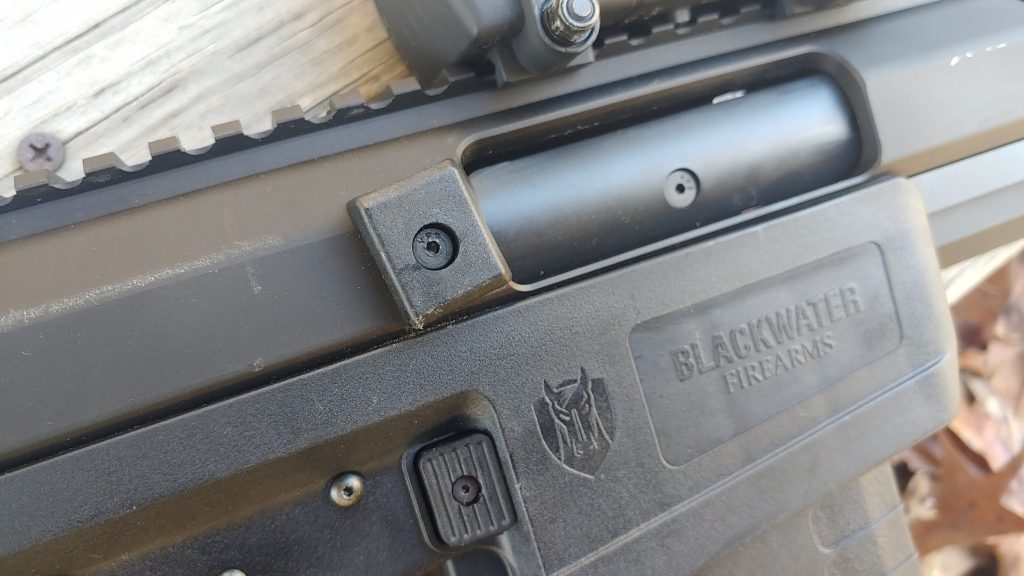 There are a few downsides. First, the gun comes with no sights, so add your own, be it Magpul MBUS sights or a red dot. I wish the pump had a more aggressive texture as I felt my hands slipping around on the pump when running the gun fast and hard. There are also no side rails to attach lights to. You run a 12 O’Clock or offset light like the OWL or Steiner Mk4. 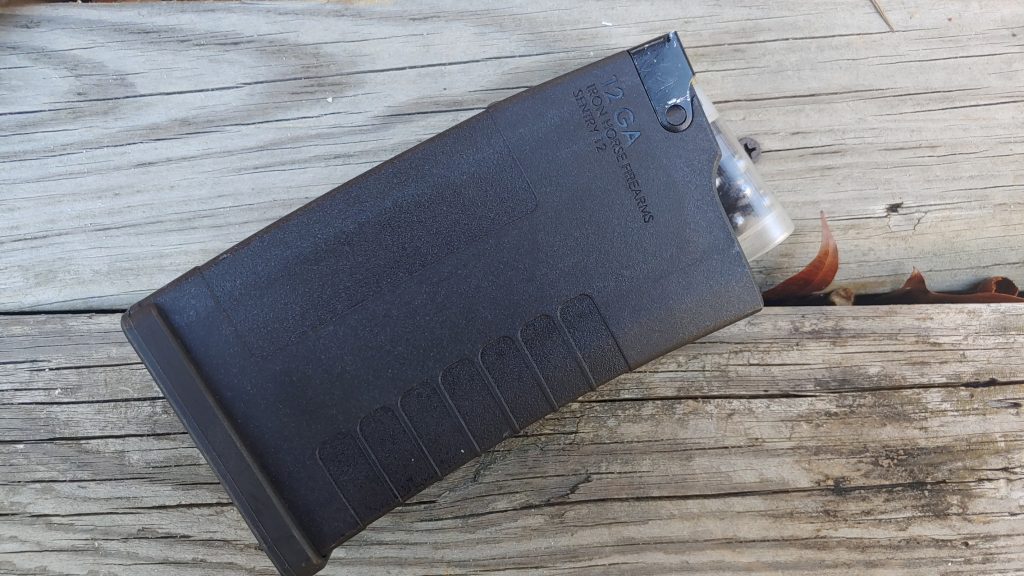 A Shotgun For Carbine Lovers

If you love carbines and feel a need for a shotgun, then the Sentry 12 might be the better option for you. It allows most of your rifle skills to translate over with ease. Also, the ergonomics are excellent, the gun is reliable, modular, and made in America as every good pump-action shotgun should. Blackwater’s first firearm is a promising start to a potentially awesome firearms company lineup.