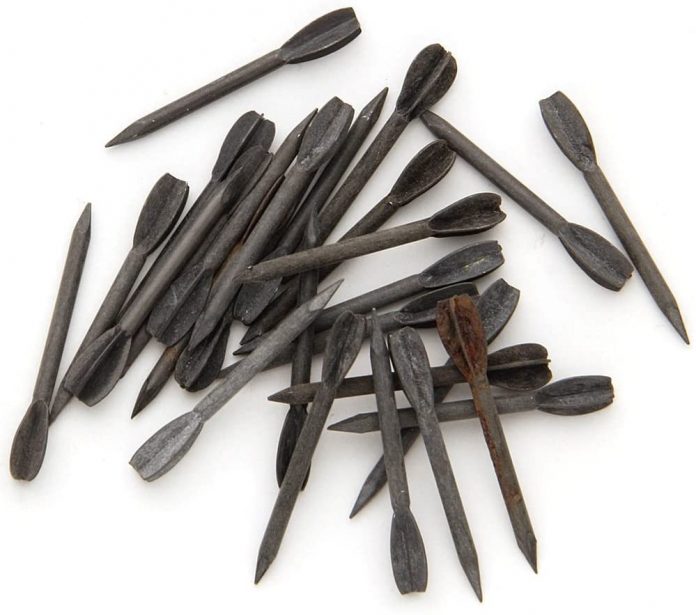 I love shotguns, likely more than most people, and loving shotguns means learning about the wide variety of loads available. The simple, large, smooth bore nature of shotguns allow them to utilize any number of practical and more impractical load. Some are fun, like Dragon’s Breath, and some are just silly. Today we are looking at one of the sillier ideas to shove down the barrel of your shotgun, a flechette load.

A flechette is a sharpened steel dart with a fin to stabilize the round. Flechettes have been used in a number of different weapons since the first world war. Flechettes have been loaded into recoilless rifles, artillery shells, and even shoulder-fired small arms. We are addressing the latter here.

Flechettes have been loaded into experimental rifles, like the Steyr ACR, as well as rifles and handguns designed to be used underwater, like the HK P11. For the average gun owner, the only real example of a flechette round comes in the form of shotguns.

Various companies produce exotic shotgun loads. Most are silly but seemingly promise sky-high performance. That’s where flechette rounds fall into play. They’ve become one of those things that are often seen as some secretive, exotic option that is somehow both superior to standard buckshot but also not widely used or produced.

Do flechette shotgun rounds really offer superior performance to your standard buckshot round? Has the ammunition world conspired to make buckshot more popular even though flechettes are seemingly superior?

The Origins of Shotgun Flechettes

Flechettes in shotguns go back to the Vietnam war. The idea was to add more range to the shotgun as well as greater penetration. Shotguns and their capability to fire a handful of projectiles per trigger pull made them excellent for jungle warfare. A shotgun round full of little, fin-stabilized darts seemed promising.

Western Cartridge Company produced the shells, and this specific load utilized 20 projectiles grouped into a very long shot cup. This shot cup would stay with the projectiles until they left the barrel to prevent damage to the barrel. Buffer material was added, and the flechettes were backed by a metal ring to support the flechettes.

These rounds were issued to troops on a limited basis, and then they weren’t. Why? Well, because they didn’t work very well.

The main problem with flechette rounds is that they often don’t fly straight. Once they leave the shotgun cup and the barrel, they begin to tumble in the air. Some go head over head, others spin horizontally, and some just fly sideways or backward. When around does fly straight, it does okay.

In ballistic gel testing, they often suck. Some penetrate less than three inches. When a flechette enters the gel tip forward, it does better, but that is so rare that the juice isn’t worth the squeeze. All those projectiles hitting sideways and backward are useless.

The spread is often also rather absurd, especially compared to modern buckshot. It spreads wider and faster than any load of modern buckshot. If you get fancy and use Hornady Critical Defense or Federal FliteControl, you are beating the pants of flechette-based rounds.

Do They Offer Any Advantages?

Oddly enough, yes, they do. Shotguns suck at defeating armor. Standard pistol armor can resist buckshot effectively. A sharpened, pointing projectile does a much better job of penetrating soft armor than a spherical ball of ammunition. These rounds can chew through soft armor if one of the many sharpened little darts is flying correctly through the air.

That sounds cool…but do you know what else can penetrate soft armor? Any rifle round. If you are using a long gun, then you might as well use a rifle if piercing soft armor is a concern. Even after it pierces armor, the flechette isn’t sailing too deep into the threat, whereas a rifle round will continue to reach appropriate depths to stop the threat.

In the Texas Tech Vietnam Archive, I did find an on-the-ground story from a soldier armed with a shotgun and flechette rounds. He didn’t have any testimony in regards to shooting the enemy with the weapon, but he did shoot a ¾ inch board. He said the rounds chewed right through it. Flechette shotgun rounds can penetrate hardcover and even soft armor, but it isn’t as effective as an intermediate caliber rifle.

For serious defensive or duty use, just say no to flechette rounds. As they sit right now, they are just a fun novelty. They are an interesting part of shotgun history, but there is a reason they were experimented with and promptly forgotten about.