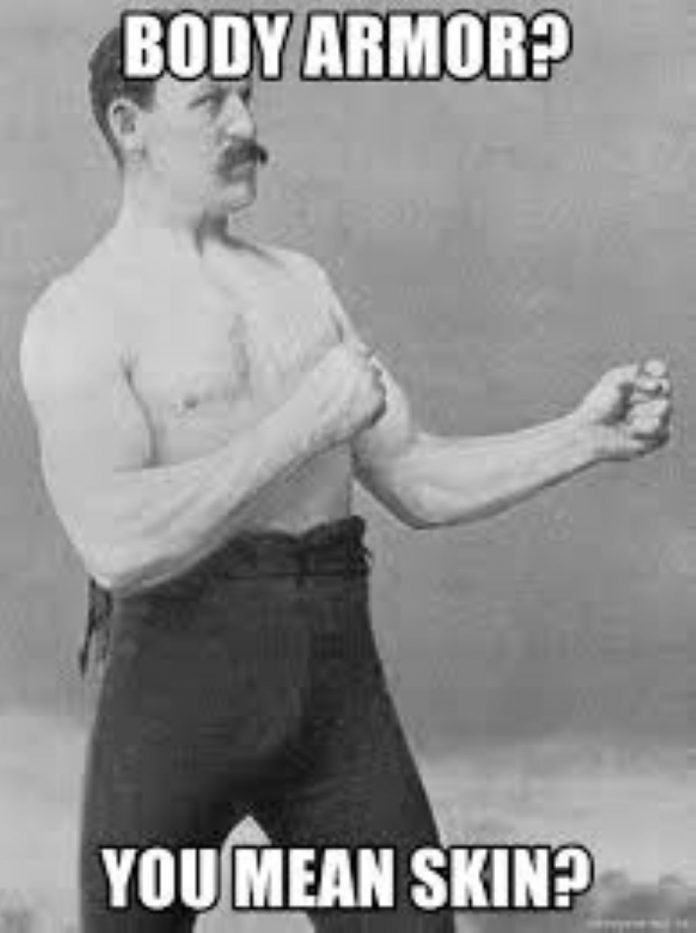 Body armor, the stuff of myth and legend. With companies coming out with increasingly more affordable options, the civilian demand for what was once reserved for military and law enforcement (mostly due to price) has never been higher.

Unfortunately, there are many myths associated with armor plates. Some of these are perpetuated by shady marketing techniques, others by misinformed “experts”. My goal over the next few paragraphs is to help the beginner navigate the world of ballistic armor.

There are generally 4 different levels of body armor. The NIJ.07 revision isn’t implemented yet, so these terms will be sticking around for awhile. They are IIA, IIIA, III, and IV.

So what will each of these stop? Let’s dive a bit deeper into how these levels are determined.

What do these mean?

The National Institute of Justice (NIJ) Standard-0101.06 establishes the minimum performance requirements and testing standards for ballistic resistance. Essentially, what this means is they have created standards that each “level” of armor must meet along with the way in which these plates are to be tested. It is excruciatingly detailed.

If a manufacturer lists their product as compliant that typically means that they, or a third party, have tested the plates to one of the standards of the NIJ. NIJ Certified means that the manufacturer has sent their plates to the NIJ to be tested in their facility using their strict methods. The NIJ lists all compliant products on their website.

So, which is better, certified or compliant?

Most of the time I recommend getting a certified plate. This ensures that the plate has been tested to the industry standard in laboratory conditions. With that being said, some of the best plates on the market are only NIJ compliant, not pursuing one of the non ballistic tests such as the “drop” test or emersion test. If you opt to go with a compliant plate over a certified, I recommend doing your research and buying from a reputable company. Not all compliant plates are trash, some perform even better than the most expensive certified plates, but resist the urge to get your Wish.com plates ladies and gentleman.

Editor’s Note: An example of a reputable non-certified plate would be HESCO’s 4800LV Special Threat. They are not a NIJ Certified Plate, nor are they designed to be. They are very transparent about the deviations from and exceeding of NIJ standards and listing the ‘whys?’ supporting those variations.

Think of an NIJ Certification like the M4 Rifle, or FN Military Collector’s Edition M4 of their FN 15. It is a known, high quality standard that can be relied upon to perform, it’s TDP (Technical Data Package) can be counted upon as a baseline. But FN also has the NRCH SCAR Series and Tactical Carbine, TAC II, and now TAC3 Series, which are all extremely well built and have features arguably better than the M4. But they don’t meet the M4’s standards, or the original SCAR Mk16/Mk17. They are not designed to meet those standards. They are designed, in many instances, to exceed them. Different parts and materials are selected to produce a differing, improved result. These different selections, a nitrided part instead of phosphate for example, put the rifle outside the certified standard. This is matching or exceeding that standard’s performance requirement, where relevant, and disregarding it where it is irrelevant. An example of irrelevant would be the NRCH SCAR not adhering to the TDP requirements of the Mk16/Mk17’s reciprocating charging handle, which is entirely the point of the NRCH variants.

What does this mean for armor plate certification?

It means that so long as you can see the tests and standards a certification is simply the NIJ baseline, what you are looking for are protocols that meet or exceed the standard and fit any additional requirements you have.

Level IIA plates are generally soft plates rated to stop up to a .40 S&W, although they are tested with a 9mm round as well. These plates are generally light and flexible and good for police officers who place mobility and weight savings over threat protection. They are tested against standard service sidearms, as those are what are most likely to be used to shoot the officer wearing the vest.

Level II plates are generally soft plates rated to stop up to a .357 Magnum and also tested with a 9mm round. Again, these are light, flexible, and commonly used in law enforcement or low visibility armor.

Level IIIA armor is rated to stop up to a .44 Magnum round and also tested with a .357 SIG. Again, this armor is generally used by law enforcement department looking for weight savings while still gaining threat stopping capabilities. Many ballistic rated helmets also meet level IIIA criteria. These are also often rated for buckshot and shotgun slug. This is the highest rating of soft armor currently in general circulation, though a couple of companies are trying to make a soft III.

Lever IV armor is a hard armor rated to stop a .30 caliber armor piercing bullet, specifically the military’s M2 AP round. This is the highest rating a ballistic plate can achieve through NIJ certification. The plates are generally heavy and expensive. They are required to stop one M2 AP to be certified, although manufacturers can request multi-hit testing.

As a caveat, manufacturers can also request a special threat rating. This is where the manufacturer designates another cartridge they would like their plate to be certified to stop. This is commonly seen with the 5.56mm NATO cartridge in level III plates. While the level III plates will stop a common .308, they are not rated for M855/SS109 and some will not stop M193 at full velocity out of a 20″ barreled rifle.

Steel VS Ceramic VS Composite

With companies selling steel plates at extremely affordable rates, sometimes as low as $60, why don’t more police departments utilize them? Budgets are a definite thing on departments.

Steel plates also have another rather substantial downside. When a bullet strikes these plates, it fragments. This fragmentation has been known to cause life-ending lacerations to the face and neck. Kind of counterproductive to a product that is meant to save your life. Companies have added coatings that are meant to limit this effect, how effective they are is up to interpretation. Do your research on these.

Ceramic plates will generally stop multiple rounds (although this is not required by NIJ testing for M2 AP, unless specifically requested by the manufacturer), but each round reduces the effectiveness until the plate ultimately fails. Companies like Hoplite sell ceramic level IV plates for around $400, an affordable price for most of us. These plates are a bit heavier than composite plates but far lighter than steel (and more effective).

NOTE: Steel plates are designed to work by being ‘tougher’ than the round and the energy it is delivering, they break the incoming round and deflect the energy. The ‘AR’ in AR500 or AR550 steel means abrasion resistant. If the round has the energy to pass through the steel, it will. Ceramic and composite armors work by catching the round at the impact point, not breaking it or deflecting it.

I know I am throwing a lot of information at you. If you are anything like me, you saw the numbers and skipped right past them. So what am I trying to tell you, the readers?

Steel plates are not very good unless it is all you can afford. Level IIIA plates are generally the highest rated soft armor you can buy. Level IV are the highest rated certified hard armor you can buy. If you are buying plates, ensure that they are NIJ Standard-0101.06 certified instead of compliant, unless you know the specific variances you are looking for. If you have any doubts, the NIJ website lists all certified plates.