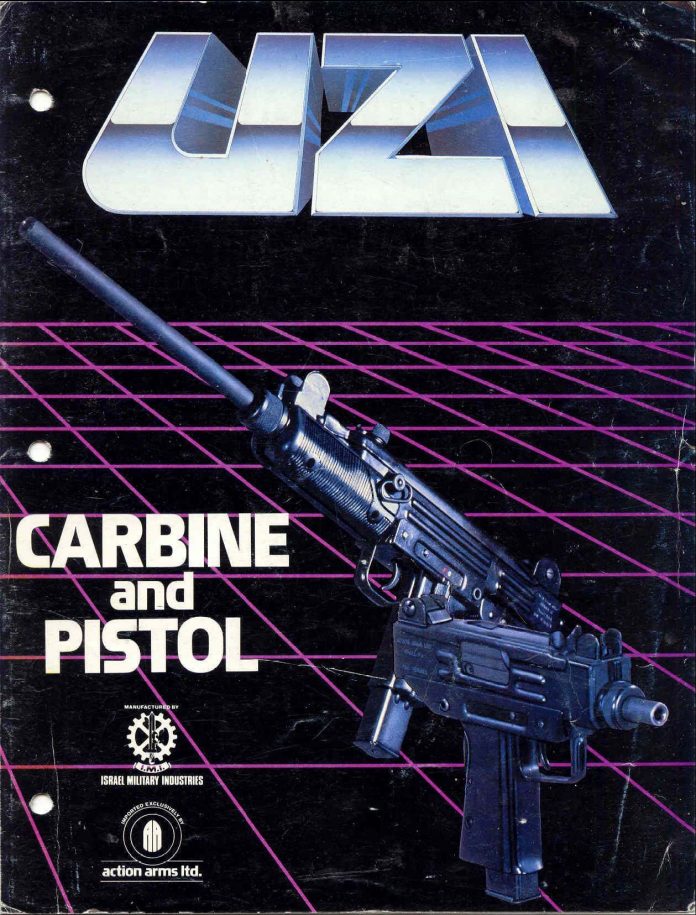 Our lives have been taken over by ads these days. Often soulless and often intending to use some subtle form of manipulation to get us to open our wallets. While we might be sick of modern ads, there is some charm to the vintage ads of yesteryear, and to me, it’s especially true in regards to gun ads. Old gun ads are just great, sometimes insane, silly, and other times an awesome representation of the era. With that in mind, I put together a few of my favorites from yesteryear…and one modern one worth mentioning.

It was 1918, and the world was still at war. Admittedly the war would end that year, but there were plenty of men still in the trenches. Dupont American Industries had an ad in Outdoor Life at the time. This isn’t one of our traditional gun ads, but it’s still somewhat of a gun ad. DuPont produced gun powder, and they had a stake in people shooting. 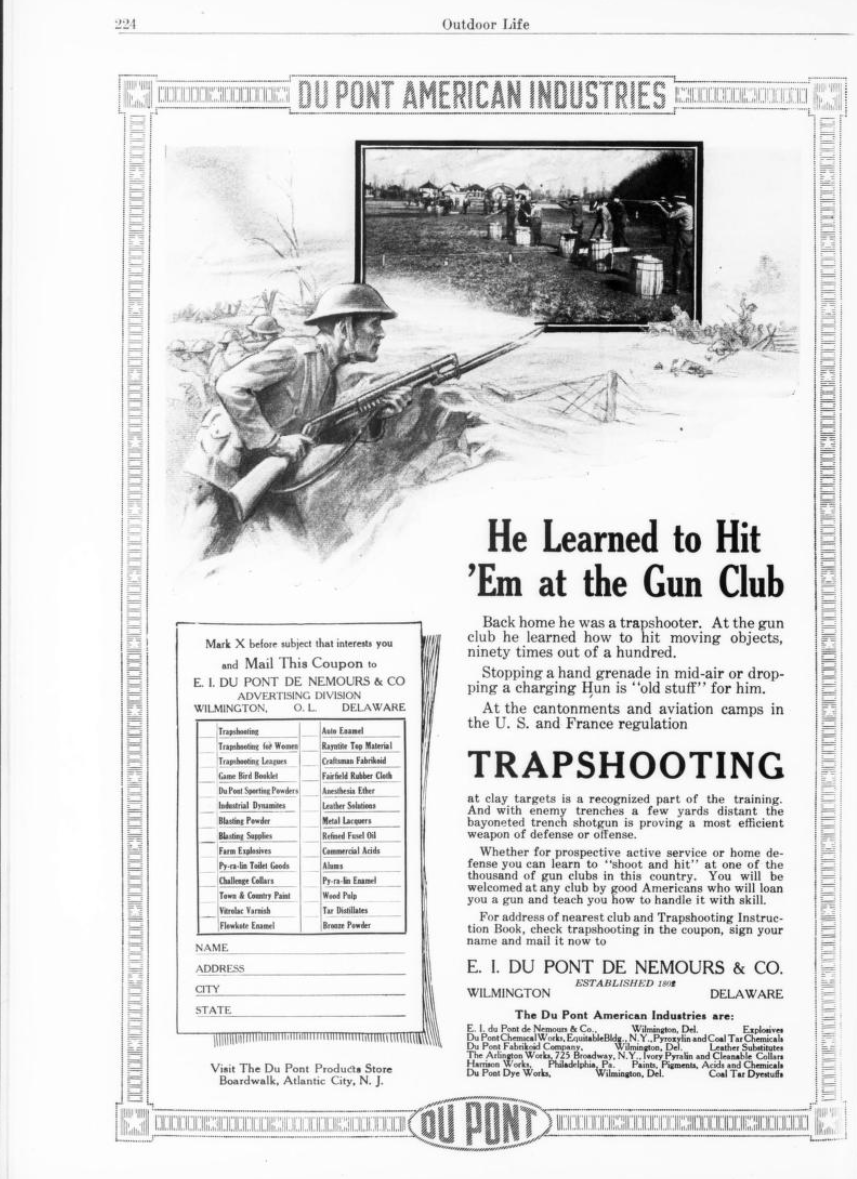 Their ad portrays an American wielding the famous Winchester 1897 Trench Shotgun. The ad mentions the man being a trapshooter and that hitting a grenade out of the air and dropping a charging ‘hun’ is just old stuff. The ad encouraged folks to learn to shoot, join gun clubs, and more.

After World War I, poor General Thompson had a hard time moving Thompson SMGs. These guns would’ve been great in the trenches, but after World War I, there wasn’t a big demand for them. This was prior to the NFA, so Thompson and Auto-Ordnance advertised to the everyman. To the man who owned a farm, ranch, or plantation, someone who is far away from any police response and is clearly a threat to roaming gangs of desperados. 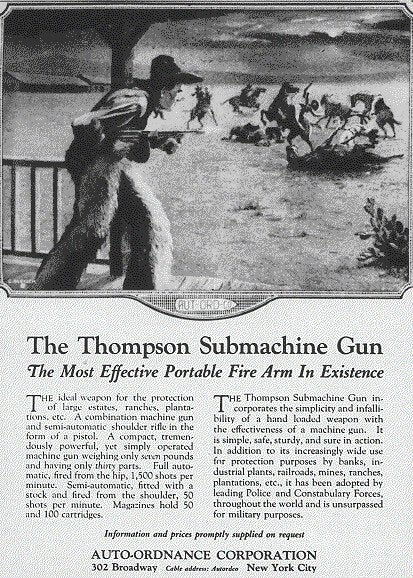 Well, maybe, it’s doubtful, but why not. Large land owners were the only people who could likely afford the expensive Thompson SMG. The ad portrays a rancher gunning down a team of outlaws coming after his home! Auto-Ordnance’s description of the gun is long and interesting, calling it a machine gun and shoulder-fired rifle in pistol form. It’s one of my favorite gun ads because I want to buy a home defense SMG without the NFA.

I did an entire article on Savage using influencer marketing to sell their unique and innovative Savage M1907 pistol. They used gunfighters like Bat Masterson to advertise the pistol, and they published numerous ads in one of the first examples of influencer marketing in gun ads. The ad feature Bat, a quote from him about the gun, and then a few paragraphs describing it. 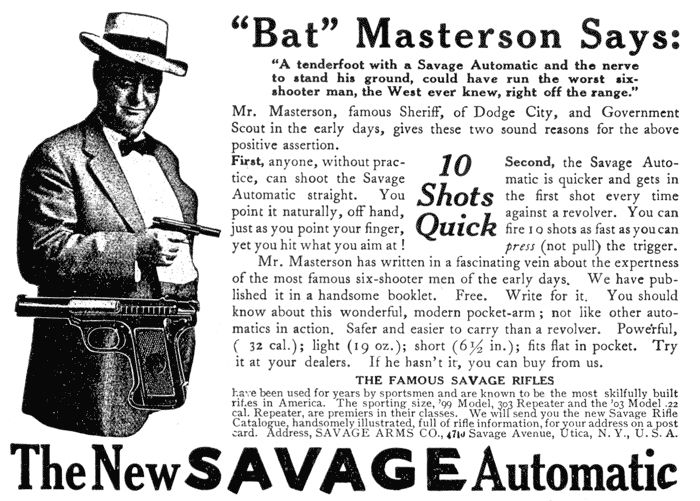 I’m pretty sure modern advertising is more about the quick delivery, but Savage didn’t get that memo. It’s paragraphs long, but you get a good description of the gun and more. The ad mentions a booklet written by Bat, it’s called the Tenderfoot’s Turn, and you can find PDFs of it online.

Choate is fairly well known for its wide variety of shotgun accessories, stocks, magazine tubes, and more. In 1988 they were a smaller company and had a small, easy-to-miss ad on the back of a number of gun magazines. Gun ads tell a story, and this one is no different. At this time in the gun world, the shotgun was the police weapon of choice. Choate wasn’t selling guns, and they were selling you the means to build your own entry weapon. This includes a magazine extension, a heat shield, a forward pistol grip, and the coup de grace, a light mounted on the receiver called a Lite-Site. It’s a Mag-lite designed to be used as a sighting system that also has a velcro-mounted tape switch. This shotgun is the 1980s Mall Ninja’s dream.

Uzi puts the plural in gun ads. I couldn’t pick just one because Uzi freaking killed it in the 1980s. Their ads were absolutely amazing, and if the ad companies received awards, IMI should dominate. A cute lady wielding Uzis while wearing Uzi merch? Yep, we got it! 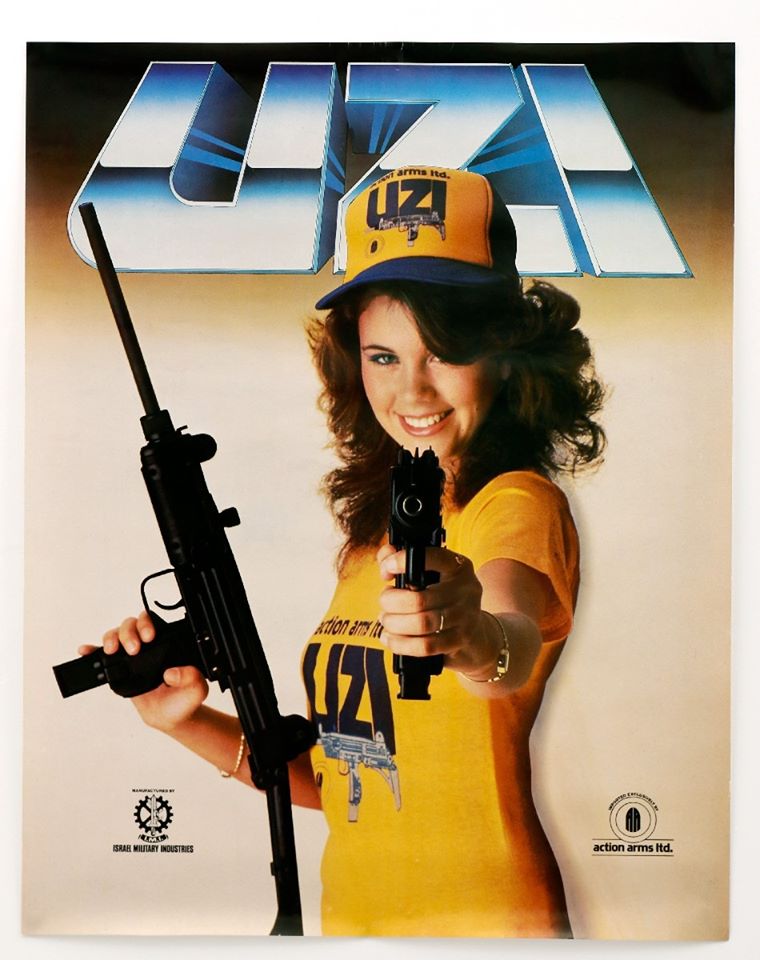 What about a cyber background that automatically makes you hear synth music? IMI has you covered. 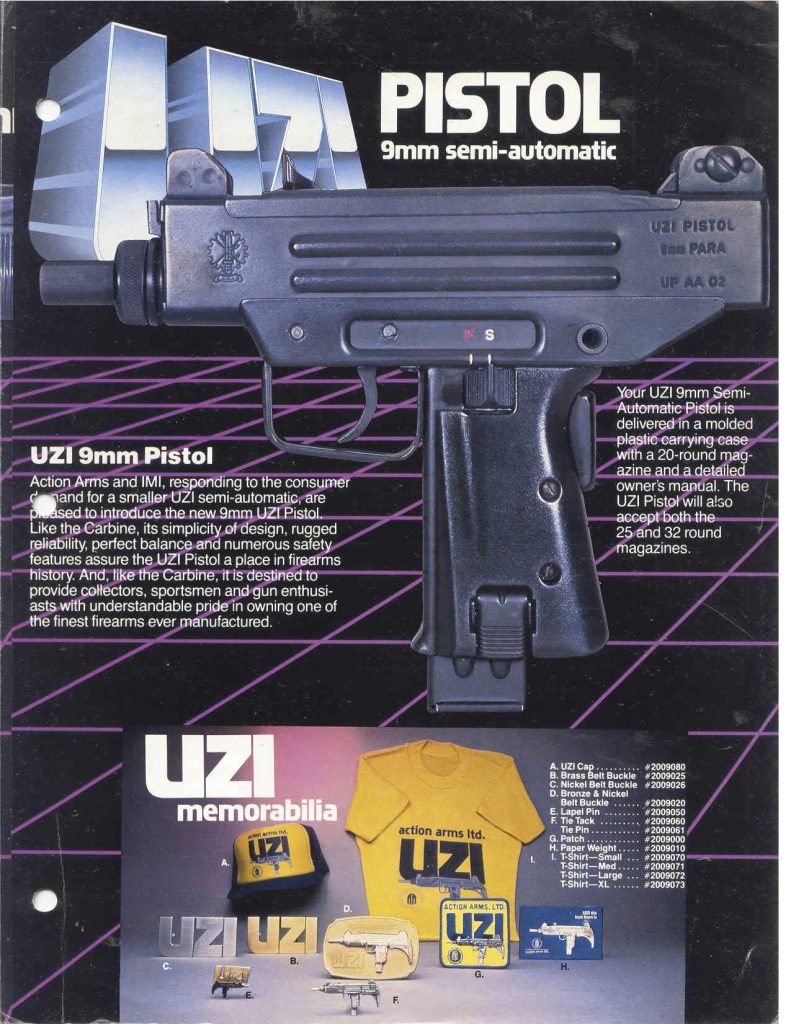 Not just once, but twice. Also, what happened to gun companies producing merch? All the ads back in the day often advertised shirts, hats, patches, etc., to go along with your purchase. Why’d we stop doing that? Also, IWI, bring back the retro yellow Uzi shirt as a limited run. Please!

Glock Has an Arrogance To It 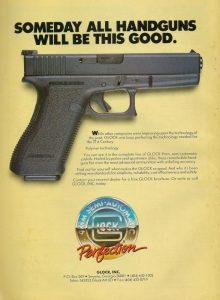 The thing is…they are kind of right. Who doesn’t produce a polymer frame striker-fired gun these days? Those companies are all trying to get those Glock-influenced dollarydoos.

Okay, so the article is all about the best gun ads, but I also want to include the most insane series of gun ads ever created. EAA released a series of ads with terrifying robotic women who have guns for legs. You’d think there would only be one, right? Well, nope, they’ve done it with a wide variety of their guns, from CZ clones to cowboy six shooters. If I have to see it, so do you. 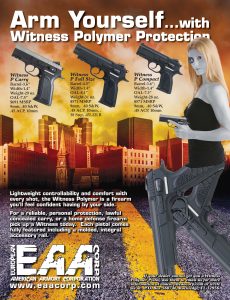 Gun companies have to be fairly careful with how they advertise today. No one wants to be too cringe or try hard, but they want to make an impression. Modern gun ads all look alike, and it’s sad. I wanna see more cuties with Uzis and fewer shades of blue, black, and grey. Let’s make gun ads great again.