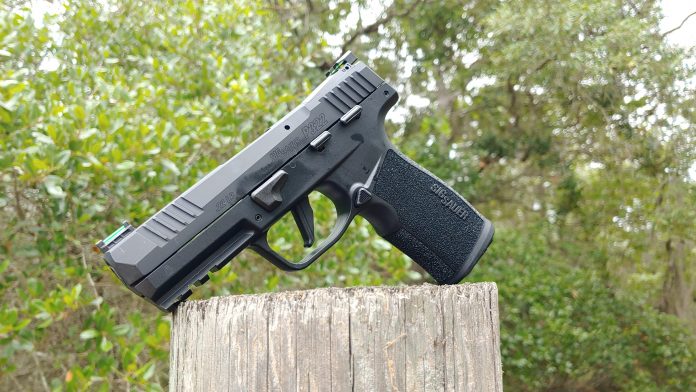 2022 is the year of the .22 LR. It’s made quite the comeback, likely fueled by the fact that ammo costs are constantly rising and .22LR remains somewhat available, surprisingly enough. FN released the 502, Beretta has relaunched the Bobcat as a tactical variant, and now SIG graced us with the P322. SIG’s released plenty of .22LR handguns before. We had the controversial Mosquito, the P250 .22LR, and the .22LR variant of the P220.

The SIG P322 is a bit different. From the nomenclature alone, you’d assume this was a .22LR version of the P320. You’d be mistaken. It’s also not the .22LR version of the P365. (Although, I’d love to get a P365 in .22LR for training purposes.) The P322 is neither. SIG designed the pistol to be a completely different firearm that’s unique. 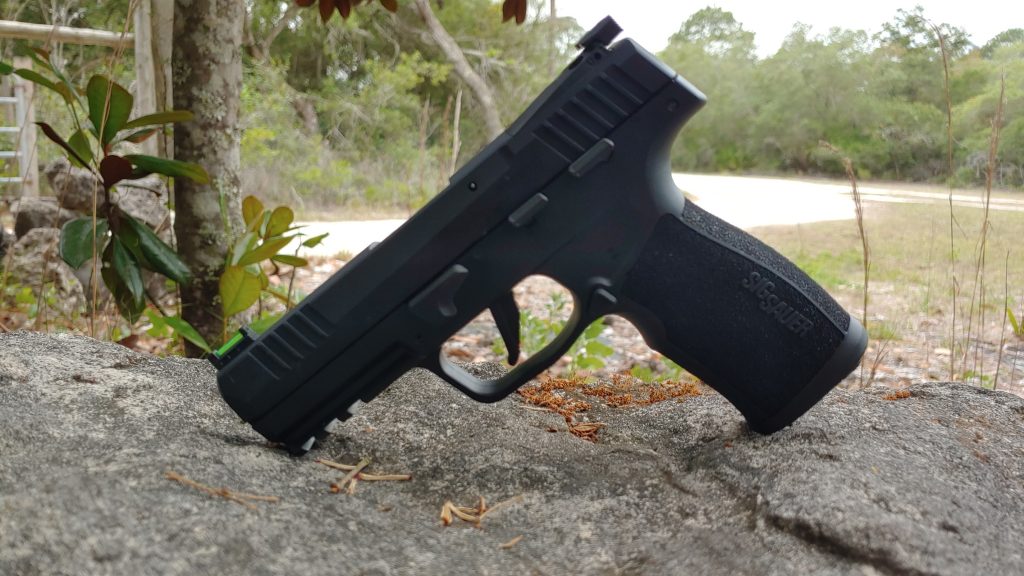 SIG designed the P322 to be its own thing but very similar to dang near every modern firearm out there. You can use the P322 as a training replacement to the P320, the Glock, S&W, Walther, or whatever else has a doublestack magazine, a polymer frame, and striker-fired action.

What are we getting with the P322? Well, it’s fairly simple. Like most rimfire handguns built to be more modern and tactical, the P322 uses an internal hammer. It’s quite common, and Walther S&W and Glock as use internal hammers for their modern tactical .22LRs. The new FN 502 uses an external hammer, as did the older SIG Mosquito. It’s an SAO hammer that does its best to mimic a striker-fired gun.

SIG made the pistol lefty friendly with ambidextrous safety and slide lock and a reversible magazine release. Since it’s 2022, SIG decided to make the P322 optic compatible. (Take a hint, Glock.) The rear sights are connected to a plate that’s removable, so you can toss on a Shield RSMc compatible red dot like the Holosun 507K. 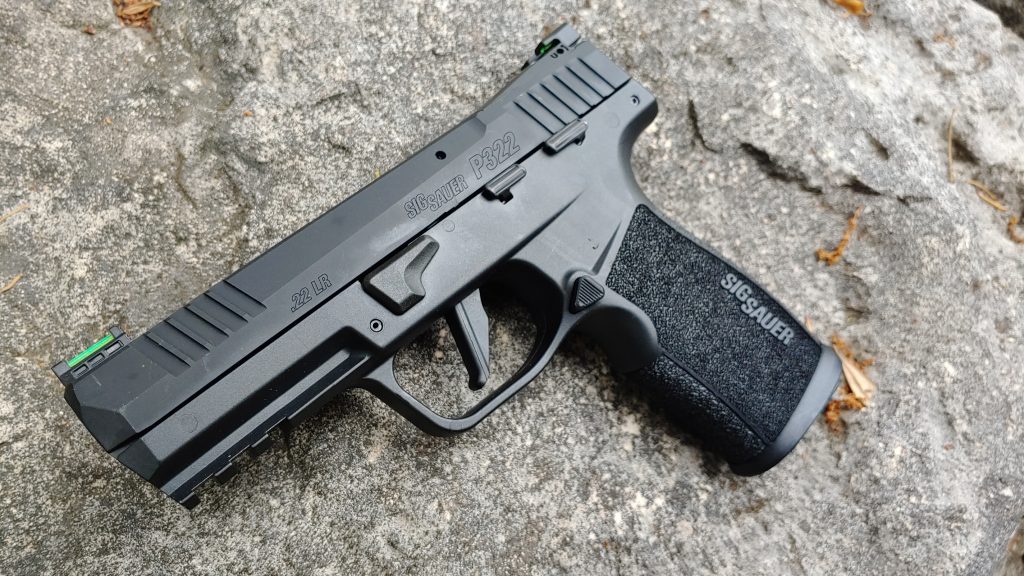 The biggest surprise, at least to me, was the magazine capacity. The gun uses flush-fitting magazines that pack 20 rounds of .22LR. That’s impressive in a genre of pistols dominated by ten-round magazines. You get two of them, and SIG is also producing a 25-round variant that’s slightly extended. To save your thumbs, SIG tossed a magazine loader in the box. 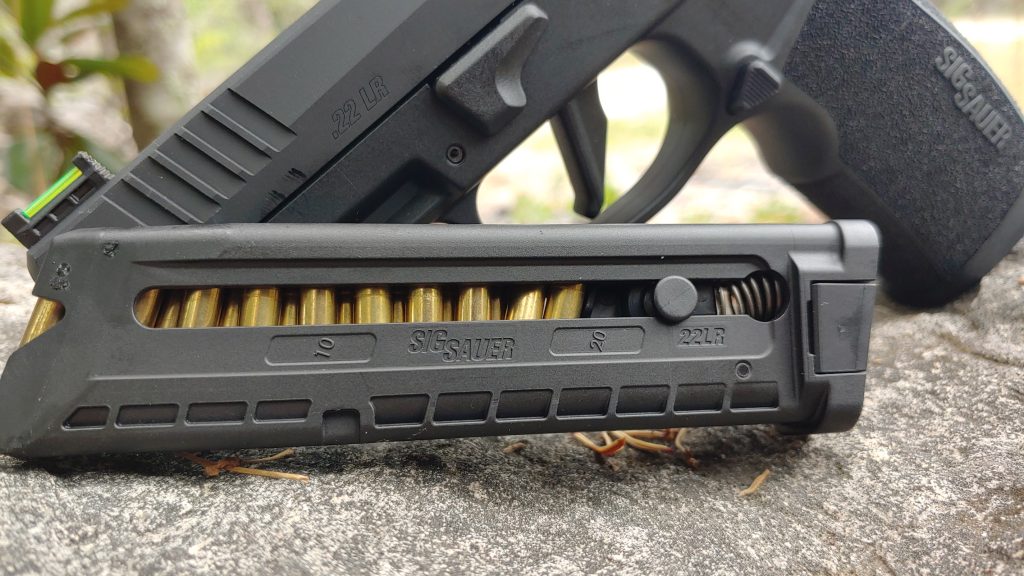 Also included with the P322 is a threaded barrel with an adapter. The barrel sits flush with the slide, and the removal of a nut and the addition of an adapter make it easy to toss on the muzzle device of your choice with a ½x28 thread pitch. Shooters can also swap the flat-faced trigger shoe with a standard round trigger shoe.

The P322 comes with more than I need, and my only complaint about the package is the box is too damn small to hold it all.

Plinking brings me great joy. It’s a no-stress, no-timer hobby that lets me just focus on putting little holes in whatever I choose to make targets. That’s where I started with the P322. Just some good old plinking. I let my oldest son shoot it and my wife. We all had a fairly good time turning money into noise. In that realm, the little P322 rules. 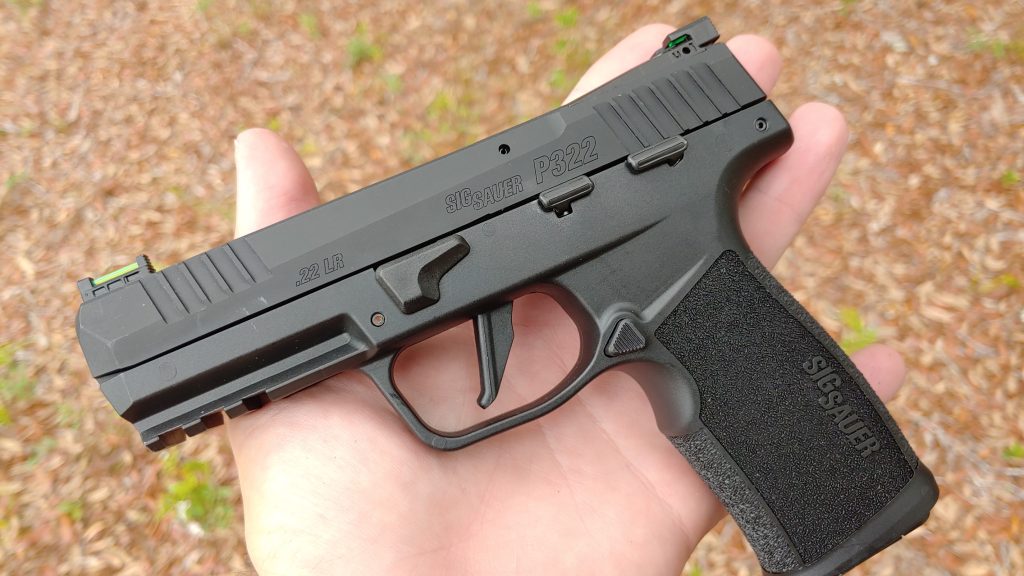 It’s reliable, accurate, and easy to shoot. If you just want a gun for plinking purposes, the P322 won’t let you down. With a price of around 400 bucks, the gun is not out of the bounds for plinking pleasure, but you might get more out of it if it acts as a training pistol.

The SIG P322 works well as a training firearm. I ran through the FBI Qual with the P322 and had a blast. Let’s address the downsides first when training with a .22LR. When it comes to recoil, you won’t get the same control challenges with a .22LR. Recoil and muzzle rise will be minimized.

It’s a step above dry firing that will give you real bangs, accuracy, drawing skills, and reloads. With the P322, you can exercise all those necessary skills with ease. It matches the size of compact to full-sized pistols and gives you a decent, if somewhat generic, recreation of most modern handguns. 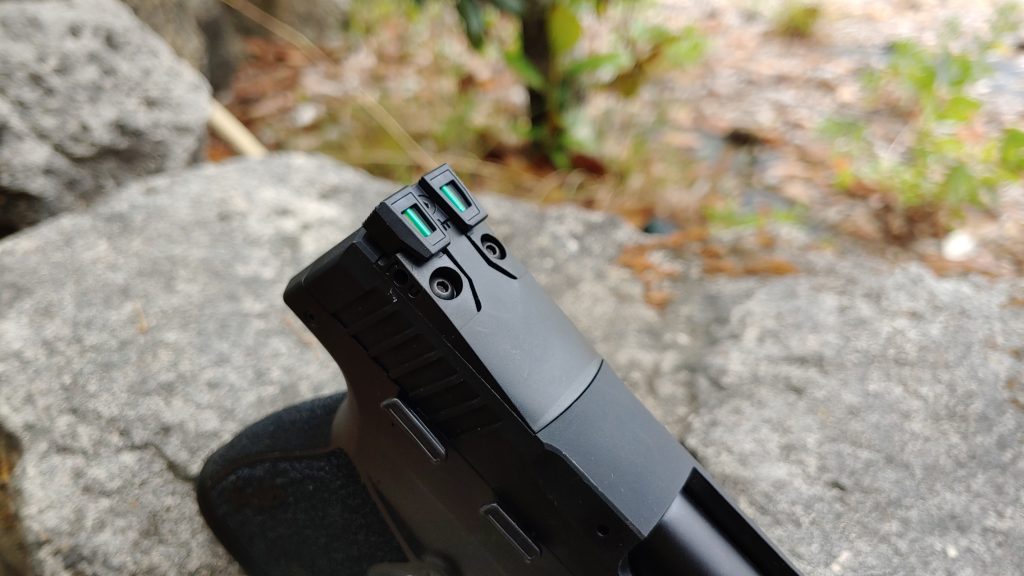 The P322’s ability to use red dots allows you to train that presentation and target focus sight picture for pennies on the dollar. The high visibility sights aren’t night sights but are easy to see like most modern combative pistol sights.

The controls are full-sized and not minimized for a .22LR. Working reloads, the slide, and more allow you to replicate those necessary skills. You can always work your general accuracy with a .22LR. The big grip replicates the design of a 9mm doublestack well and allows you to draw and engage as if it’s a truly defensive firearm. 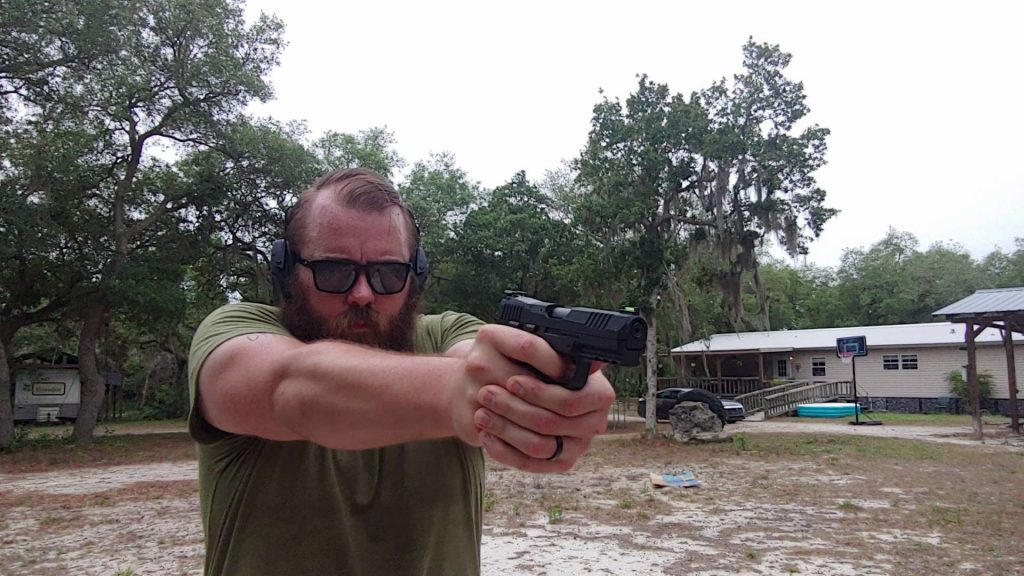 SIG delivers a reliable firearm design in the P322. It allows shooters to plink their way through just about any bulk ammo out there. I used Winchester, Federal, and Remington with no real issues. I had more duds with Remington than the other two, but that’s what happens when you buy literal buckets of ammo.

There are two downsides to the P322. One involves the design, and one involves using a unique design. That unique design means there are hardly any holsters for the gun. SIG produced an IWB/OWB convertible, but it’s been perpetually out of stock as of this writing. For training purposes, the Phalanx Defense Stealth Operator worked okay. 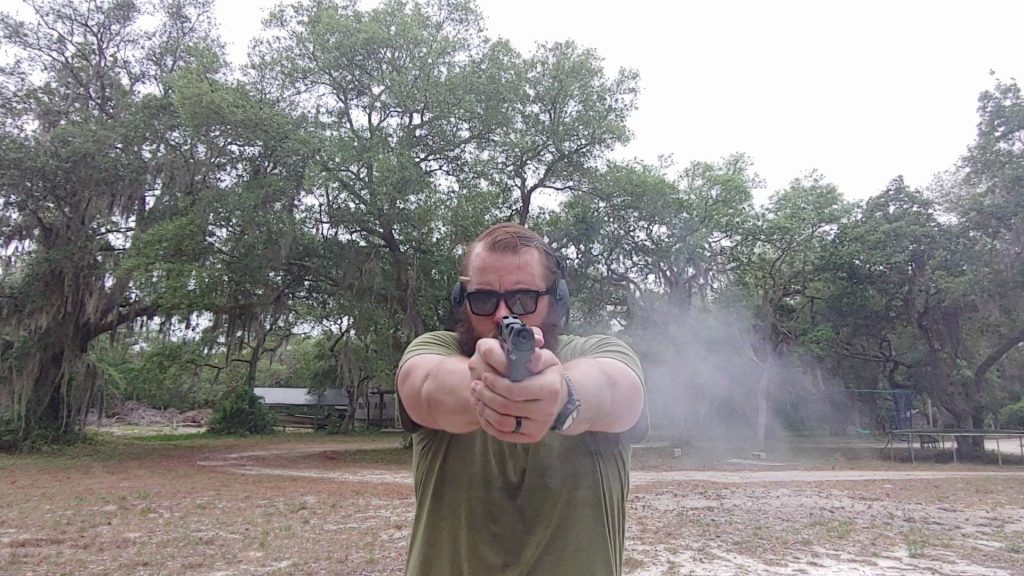 The other downside is the somewhat stiff and spongy trigger pull. It won’t win awards by any means. It’s useable but feels stiffer than the FN 502 and TX-22. It feels like it could be improved and made a little cleaner.

While the trigger holds the gun back, I think it’s likely the best modern .22LR tactical style pistol out there. SIG made some wise decisions with the design and delivered a modern, easy shooting handgun well worth the rather affordable investment. At 400 bucks, it’s tough to buy the FN 502 for just a slightly better trigger.

I’m planning to take my P322 to my next steel challenge match, so wish me luck.