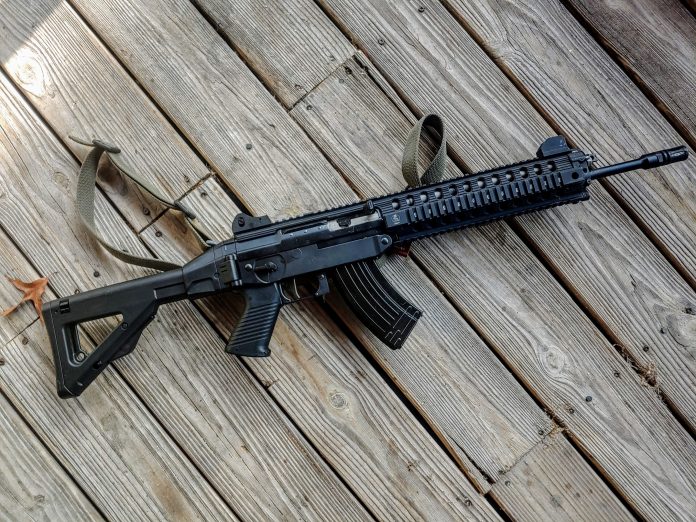 The early 2010s were a wild time. There seemed to be a bit of an obsession with releasing new rifles that weren’t AR 15s and I kind of miss it. We had the SCAR 16 and 17 models, the Remington ACR, and the SIG 556 series. One of the SIG rifles I was immediately fascinated by was the SIG 556R and it wasn’t until several years later I was finally able to find one.

The SIG 556R wasn’t a standard STANAG pattern 5.56 rifle. Instead, it was a 7.62 x 39mm rifle designed around AK 47 magazines. This was one of the first AK alternatives that utilized AK pattern magazines. The SIG 556R looked to be the most modular rifle in the heavy hitting 7.62x39mm round. It was more modern than the classic Kalashnikov and had the potential to be an interesting military rifle.

Plenty of Middle Eastern, South American, and former Soviet Bloc countries are fielding the Kalashnikov. They have millions of AK rounds and tons of AK mags. When they want a new rifle, SIG had an off the shelf option that offered modern modularity.

The SIG 556R rifle offers a built-in optic’s rail, heavy use of polymer to reduce weight, a more modern ambi safety, the ability to mount a multitude of rail systems, as well as an adjustable stock. The stock also folds and is much more comfortable to use than most AK folding stocks.

The weapon’s upper and lower can be separated almost identical to an AR 15 and it would be easy to attach different uppers for different uses including short barreled variants. Also, the gun sports a much longer sight radius than an AK, and it’s easy to attach sights that can cowitness with an optic.

The point seemed to be to create a rifle that functioned like a standard Western Rifle, with AK mags and ammo. It’s more modular, more customizable, and overall a much more modern rifle.

Something about its odd design spoke to me and I wanted one. Oh, I also had about 3k AK rounds and about 50 AK mags at the time. So, I wanted one the same reason a foreign army wanted one. Unfortunately, before I got my hands on one SIG killed the 556 series, and the Gen 1 556Rs in particular had a bad reputation.

This is what lead me to purchasing one at a ridiculously low price. It was apparently plagued by problems of all types. I purchased it, promptly contacted SIG about fixing it, and paid for a shipping tag. It took a few weeks, but they fixed the problem and shipped it with no further charges. After that my SIG 556R ran like a champ and continues to do so.

Mine is a Gen 1.5 model apparently, with Gen 2 models and later SIG 556xi models fixing the apparent reliability problems. Mine is also equipped with a Troy quad rail system which adds about three pounds to the gun. The rifle weighs 7 pounds unloaded so it’s not a heavy beast by any means.

The rail system makes it front heavy and unbalanced though. I wish I had standard handguards to swap out with to be honest.

The SIG 556R is a piston driven rifle that utilizes a long stroke operating system. This means there is no need for a buffer system, so the rifle can and does have a folding stock. The rifle has a two-position gas adjustment system. The idea is if you shoot so much cheap ‘commie’ ammo through this gun it becomes too dirty to cycle, so you swap to the next position and keep going. Never something I had to use, but I appreciate the effort.

The 556R uses very AK like controls. There charging handle is firmly planted on the right side of the rifle. The SIG 556XI model would introduce a left-handed option later on. The magazine release is an AK paddle style as well. The safety is a much more modern ambidextrous model with a very short 45 degree throw.

The stock is adjustable and has what feels like 4 collapsing positions. It’s hard to gauge because the stock doesn’t want to move and when it finally does it jumps wildly. This is certainly an issue, especially when I’m spoiled rotten on AR stocks that slide and move with absolute ease. The stock also does fold which is nice but doesn’t lock closed when I’m using the Troy rail.

The SIG 556R is a slick and fun shooting rifle. The trigger is nothing to write home about and is somewhat heavy and spongy. It works though. I’ve ran much better triggers, especially in AR style rifles. Recoil is very soft and muzzle rise is minimal. The recoil feels less than a standard AK and is certainly more comfortable.

The 556R is controllable as well, with very little muzzle rise. It comes equipped with a birdcage flash suppressor which does its job well. The stock is made from polymer and is robust and comfortable to shoot with. The stock provides a decent cheek weld that allows for comfortable shooting.

At 100 yards I can create 2-inch groups with steel-cased standard 7.62x39mm ammunition. With Hornady brass-cased goodness I can get down to about 1.5 inches. It’s not an MOA gun, but it’s closer than most AKs are.

After SIG fixed the gun it’s run 100% of the time with any ammo and mag combo I choose to shoot with. I’ve run Tapco, Korean, Magpul, Romanian, and Chinese magazines in the gun and they all work and function without issue. The Magpul magazines are slightly tight with the magazine release, but not bad enough to make running the gun difficult.

The gun runs like any other AK platform. There is no bolt hold open and you have to rock to remove the AK magazines. This makes reloading slower than an AR-style rifle. You can do the Call of Duty reload. Technically it’s a speed reload where you use your fresh magazine to release the old magazine and then reload. It’s a legitimate technique, but I first saw it in Call of Duty.

The SIG 556R rifle still features a lot of the AK’s weaknesses which does place it ergonomically below certain modern rifles. However, the gun excels past the AK in numerous ways, including ergonomics, recoil, controllability, as well as modularity.

The SIG 556 rifles have unfortunately been killed off by SIG, and I don’t think they ever really got a chance to grow and expand. That being said they do have a cult following. That has produced a few aftermarket upgrades. This includes stock adapters to allow the gun to utilize AR stocks, as well as MPX stocks, and ACR stocks. Sampson produced a railed forend, but I believe it’s discontinued, as is Troy’s. I’m debating between an MPX adapter or a M4 style stock adapter.

I still enjoy the rifle, it’s a fun gun to shoot. It’s even more fun when I get a little tired of the same old same old. The SIG 556R is a unique weapon, and I wish the American market embraced them a bit more. However, we got what we got, so I’ll enjoy that while I can.