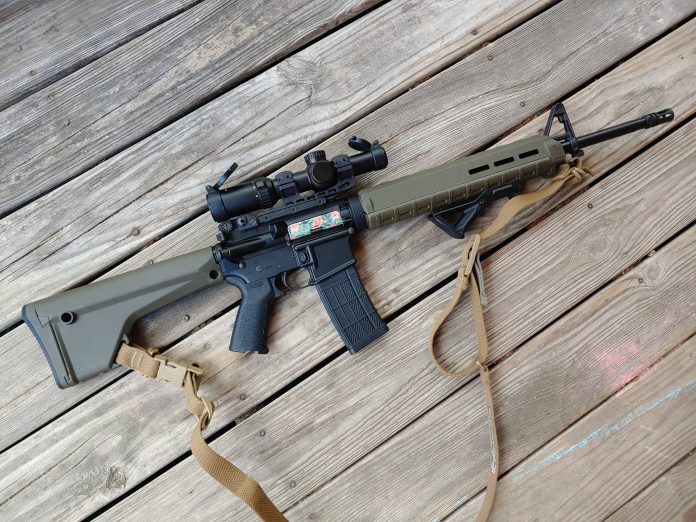 The AR-15’s popularity has been driven quite far by the carbine variant of the rifle. Carbine variants with their 14.5 or 16-inch barrels and collapsing stocks dominate the market, and for a lot of people, they are a great option. I still see the classic rifle variant of the AR-15 with a 20 inch barrel as a very viable option. Not to say anything bad about shorter carbines, AR pistols, or SBRs.

Most companies who produce a rifle variant of the AR-15 present it as a marksman’s rifle or an A2/A4 clone. Nothing wrong with that, but what about an alternative option? There are lots of different kinds of carbine builds out there, but I wanted to present a rifle build. I call it the Light Rifle. My goal with this particular model was to modernize the full-sized rifle on a budget, while still using quality components.

I chose Aero for a few reasons. First and foremost, I wanted a quality option at a good price. Aero Precision makes excellent rifles and does so at a rather attractive price range. You can find cheaper, but you won’t find better quality at such a low price.

I also wanted the upper and lower to be built. I enjoy building AR-15s, but I do trust professionals to do it more than I trust myself. Aero is one of the few companies that offers a 20 inch AR these days. This specific model is the M16A4 lower from Aero and the A4 upper without the Knight’s rail.

The reason for the 20 inch barrel is simple. This is what the rife was designed with and what length gets the most out of the 223 Remington/5.56 NATO chamber. The round gains a bit of velocity through the longer barrel. Extra velocity equals extra oomph.

Extra oomph is a scientific term. That extra oomph often translates into better penetration through ard cover with less energy lost. At longer ranges, the increased velocity can lead to more damage against a fleshy target. At close ranges, the extra velocity allows for a greater chance for hard armor-piercing capabilities. This is especially true for M193 rounds from a 20-inch barrel. 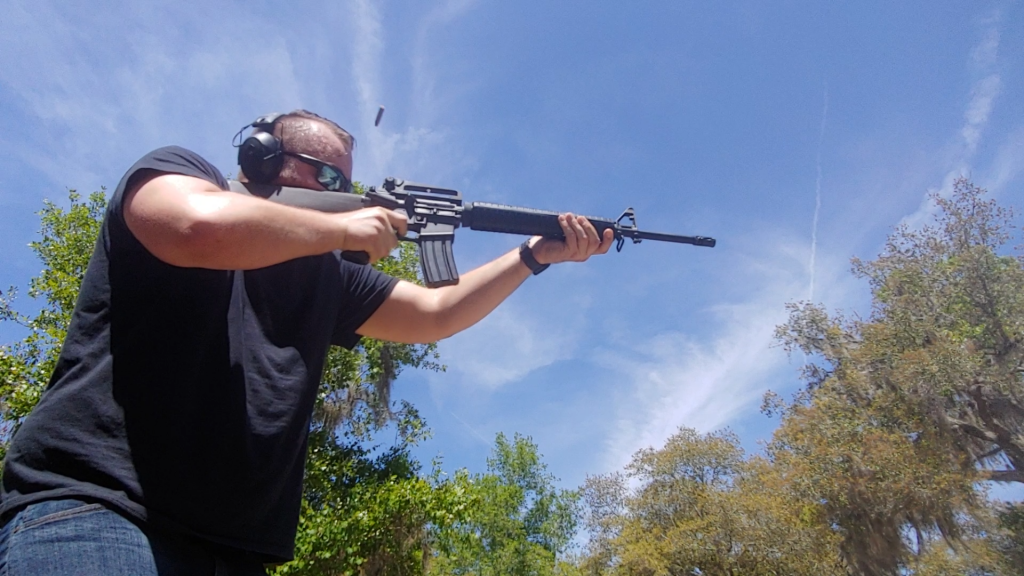 It’s important to distinguish that its not just steel armor, and not all steel armor is created equally. Lower end steel armor from fly by night companies might as well just be target steel. If the company seems new with prices too good to be true, then it likely is. AR500 Armor, for example, ensures they explain their ratings and distinguish between what one set of plates can do versus another.

Even ceramic plates have weak points around the outside of the plate a complete stop on the sides is never guaranteed.

That extra velocity also helps make the round better suited for most hunting loads. A lot of 223 Remington rounds with soft points designed for hunting work best from a 20-inch barrel when it comes to expansion.

The 20 inch barrel AR gets you extra velocity as well as a smoother handling rifle. Recoil is lighter, and concussion is reduced as well as muzzle climb. The rifle-length gas system allows for a smoother and reduced recoil impulse. This Aero Precision M16A4 clone handles like an absolute dream. Since the trigger lacks the three-round burst function, it’s much better than the USMC M16A4 trigger.

On the other side of the equation, the 20-inch rifle is harder to use in and out of vehicles, as well as in close range CQB situations. As someone who served at a time when only Squad leaders and above got M4s, I’ve cleared numerous rooms with an M16A4 and its 20 inch barrel in MOUT towns across the Marine Corps. Often with an M240 slung around my back because the Marine Corps rarely makes sense. 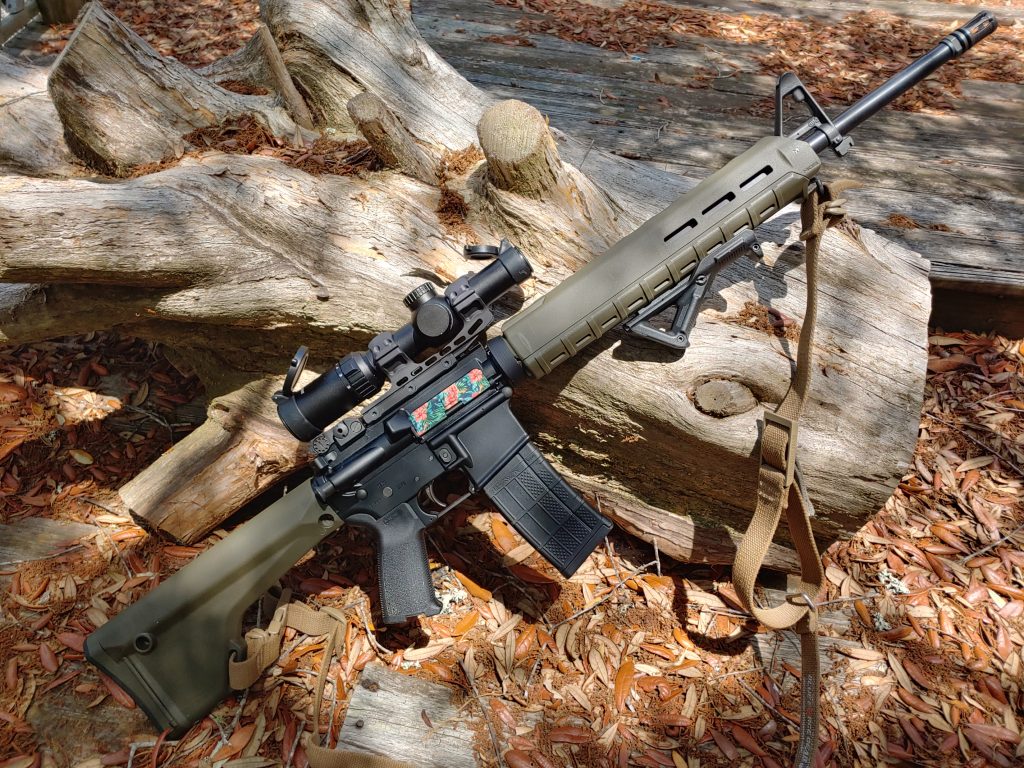 Given a choice, I would take an M4 profile or shorter gun for inside the home. However, I still feel comfortable clearing rooms and buildings with a full-sized AR-15 rifle. It’s not as comfortable or as easy, and you do have extra precautions around corners and when stacking up. It’s a training issue you can overcome.

A bonus to the extra barrel length is extra standoff distance is you equip a pointy stabby thing to the gun.

Fixed Stock – The Why

A fixed stock is not a requirement of the light rifle or any rifle length AR-15. Throw whatever stock you want on the weapon. I did like the fixed stock on my Aero Precision M16A4 clone, but I didn’t necessarily love the M16 stock. I popped it off and attached a Magpul MOE rifle stock. 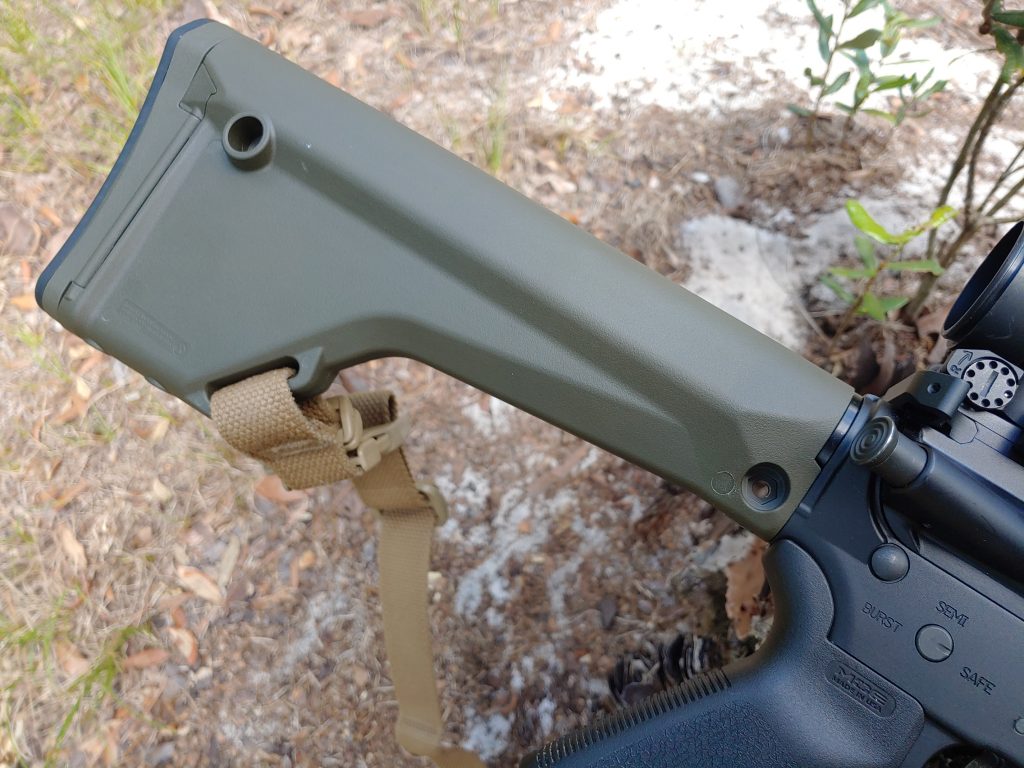 An adjustable stock does give shorter shooters more options, but I find the Magpul MOE’s 13.5-inch LOP perfect for me. This stock is heavier than most M4 stocks, and at 14 ounces, some stock weighs less than half of it. I do find the extra weight to better balance the rifle with it’s longer 20 inch barrel.

Additionally, the stock’s length is always the same, and I always know what to expect when I throw it to my shoulder. The Magpul MOE stock also gives you a rather larger storage compartment for stashing cleaning gear, spare parts, and even Skittles. 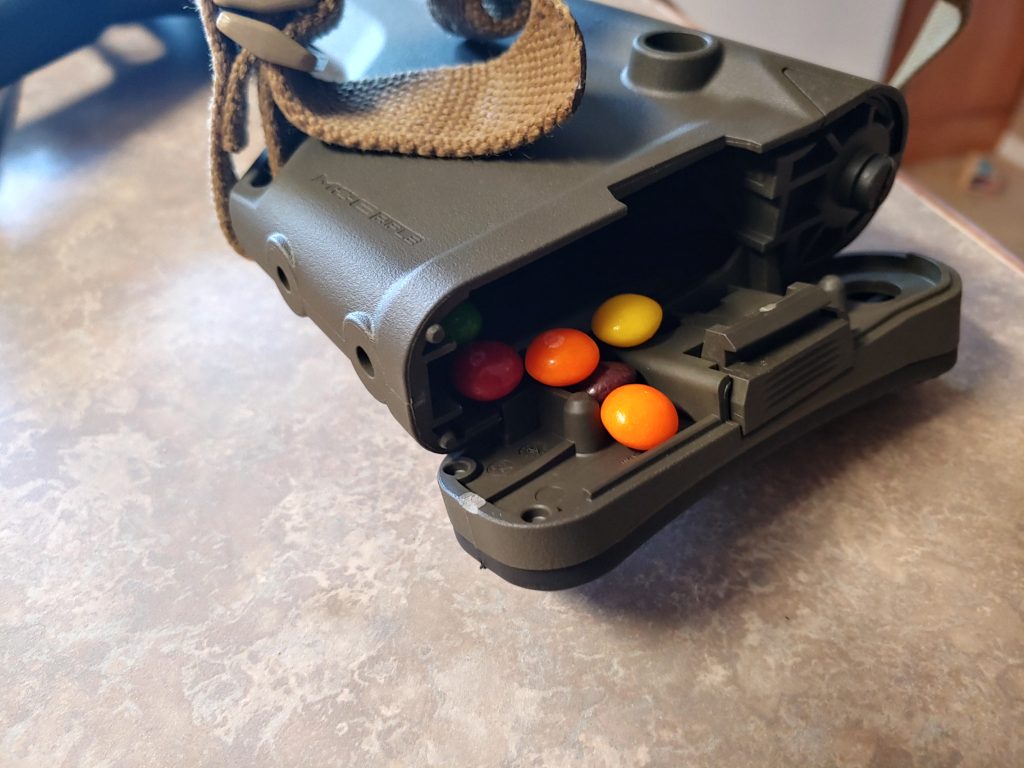 As far as quad rails go, there is no better option than the Knight RAS rail. However, the light in light rifle necessitates we trim a little weight. A free float rail isn’t going to happen with the front sight base.

Modular and much lighter rails now exist, which makes the gun less front heavy. I went with the matching Magpul handguard, so the colors matched! Finding modular handguards for a rifle with a front sight base with a 20 inch barrel isn’t always easy, and Magpul offers a proven option. 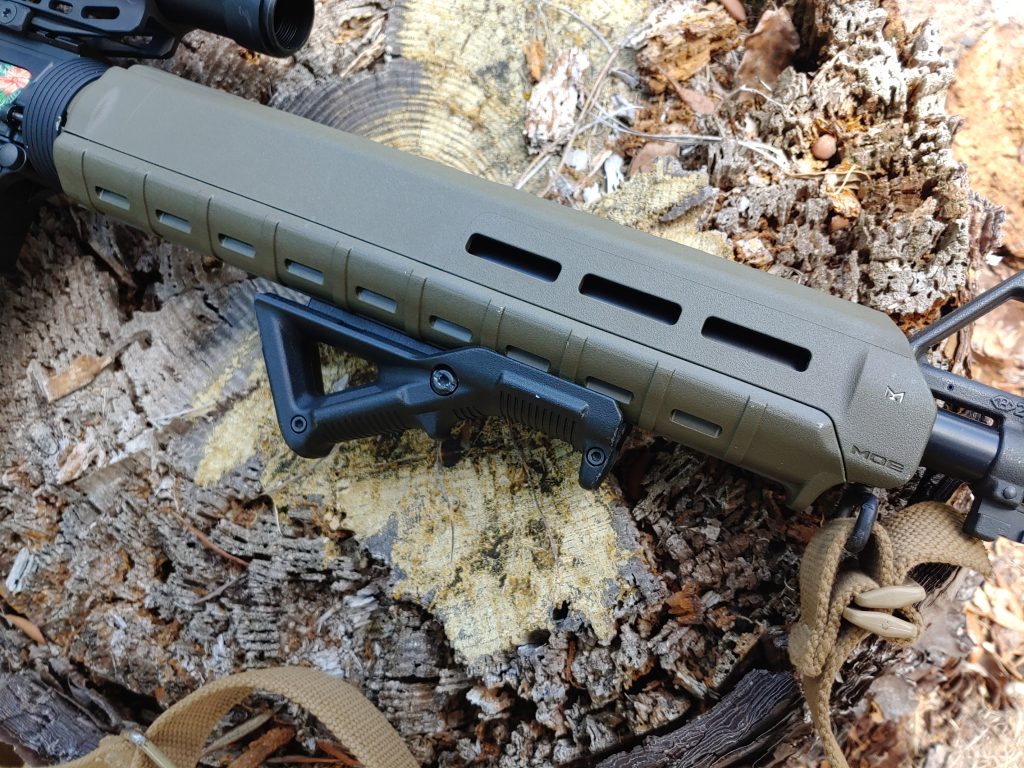 Also, it’s an affordable option for an affordable rifle. The handguards have M-LOK slots, and you can make it as modular as you choose. Other options exist, and some may even be better, but I am a fan of the Magpul series.

Modern rifles need modern sighting solutions. The modern solution for a modern world is a low powered variable optic. These optics allow for both close quarter’s encounters with their illuminated reticles and 1X capable settings. As the distance increases, so does the magnification up to 10X these days. A 1-6X or a 1-8X is perfectly acceptable. I use an Athlon Argos BTR 1-8X. It’s an affordable, high-quality optic option that fits our needs. 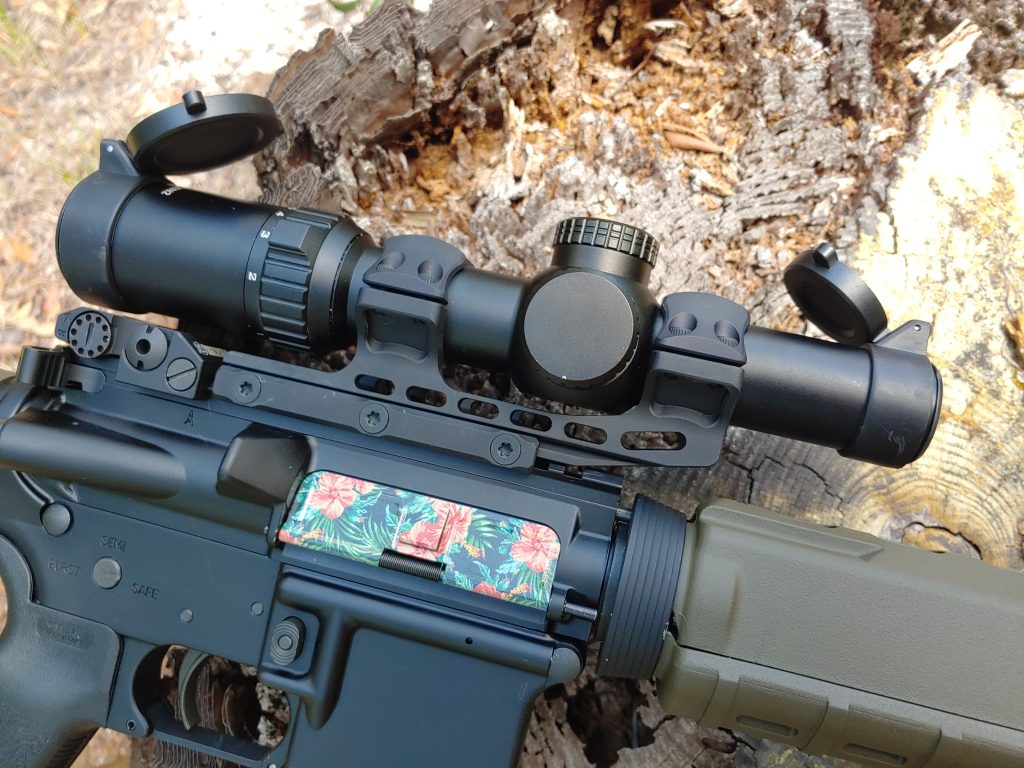 If you wanted to put the light in light rifles, a prismatic fixed power optic is a good choice as well. The Marines recently dumped their ACOGs fro LPVOs, but these optics are still very capable. Some newer prismatics are very tough and very capable. The Primary Arms and Swampfox lines are impressive prismatic options at a really great price.

I do thin the Front sight base on a 20 inch rifle makes a lot of sense. On the affordable front, you may not be able to add an optic right away. If that is the case, then add a carry handle rear sight. The long sight radius makes the gun stupid easy to shoot accurately. In fact, the carry handle comes with the Aero M16A4 upper is the perfect rear sight. 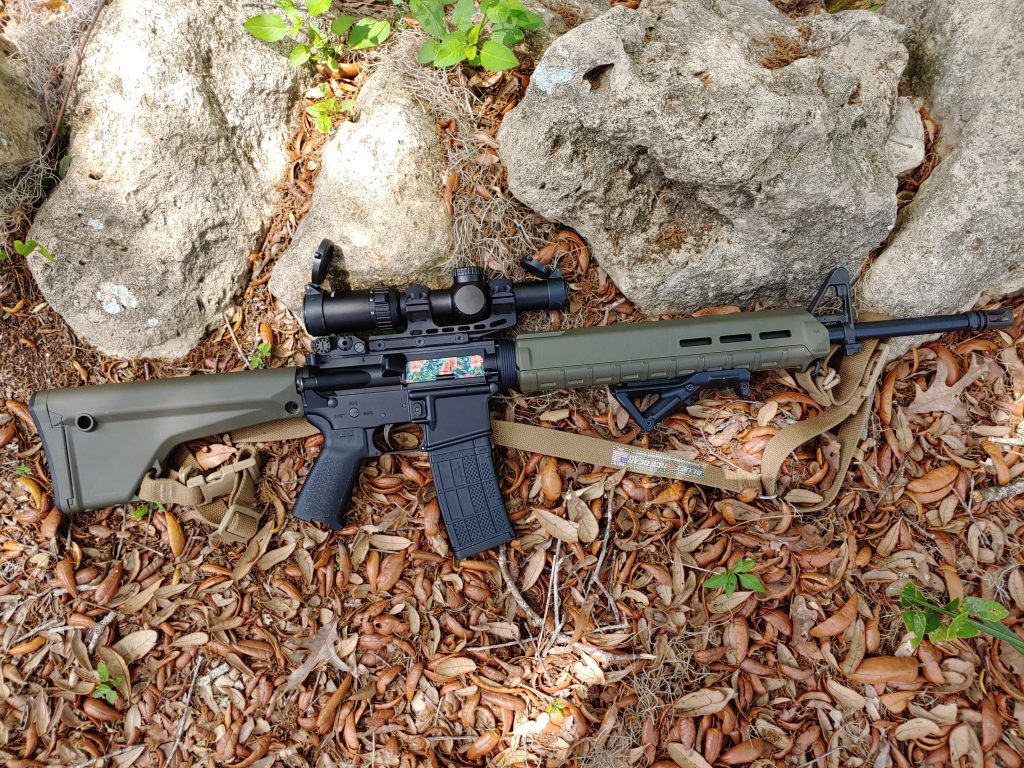 As far as back up iron sight, the Magpul MBUS sights are also a good, low profile choice. I have a rear Troy sight on mine simply because it was an extra I had laying around. If I had to purchase a new option, the MBUS sights would be perfectly compatible.

Light Rifles For All

This isn’t a gun for everyone, but I do see a rifle that’s perfect for a variety of tasks. It can be a defensive carbine, a hunting rifle, a fun gun, or even a competition rifle. While the carbine may rule I do believe the 20 inch barrel AR-15 is still a worthy contender and a damn fine choice when it comes to choosing an AR-15. I’m not the only fan of rifles with 20 inch barrels. Check out Keith’s articles on his version of the M16A5 and his 2020 update. We share very similar tastes in rifles and full-sized EDC handguns.