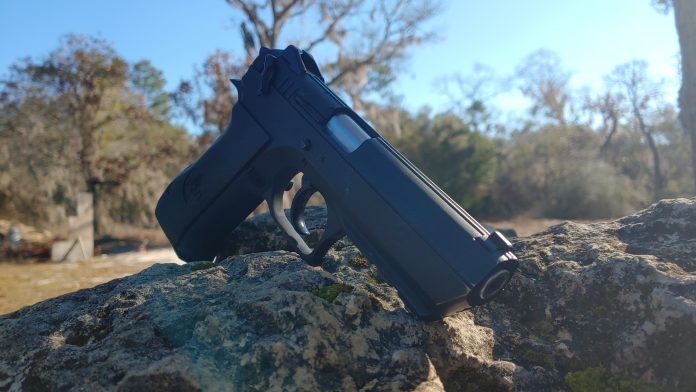 Some guns ooze cool. The Jericho series of handguns are one such pistol. A Glock 19 is great, but no one is ever going to think it’s cool or stylish. When you look at and handle the Jericho you can’t help but think about how damn cool it is. The gun features wonderful unique lines and angles, unlike any other handgun. It stands out in a word of polymer-frame striker-fired pistols.

The Jericho series of pistols was designed by Israeli Military Industries for Israeli police and security forces but has become a favorite of discerning shooters. 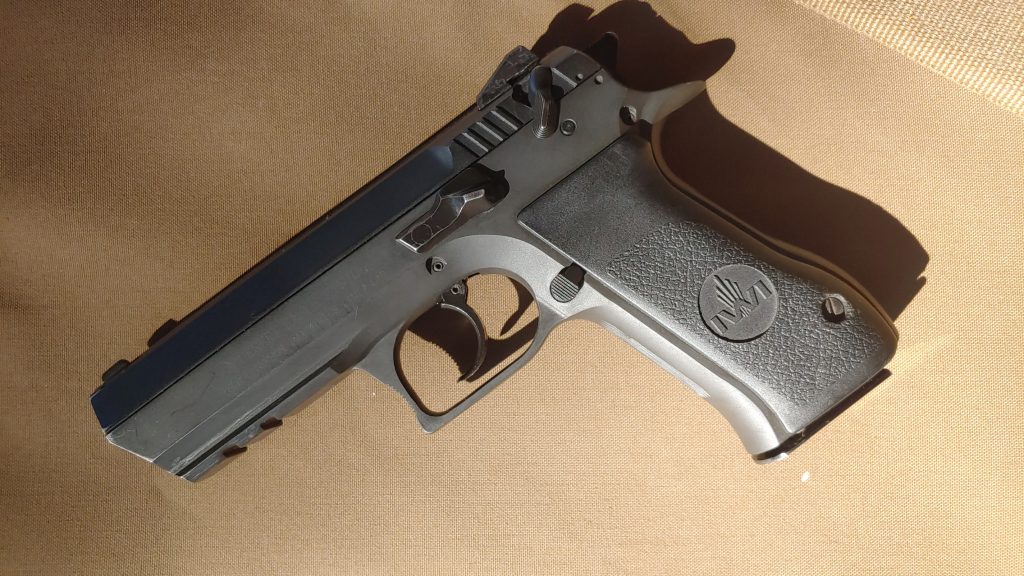 The Walls of Jericho

After the success of the Galil, IMI decided to do something very similar with their newest handgun. Israel examined the success of one of the world’s most popular pistols, the CZ 75. Like the CZ 75, this is a metal frame, DA/SA, semi-automatic pistol. They utilized the CZ 75’s main design and adapted it to the harsh desert environments of Israel. The Jericho was born with several improvements and adaptations that allowed the pistol to be extremely reliable in harsh environments. 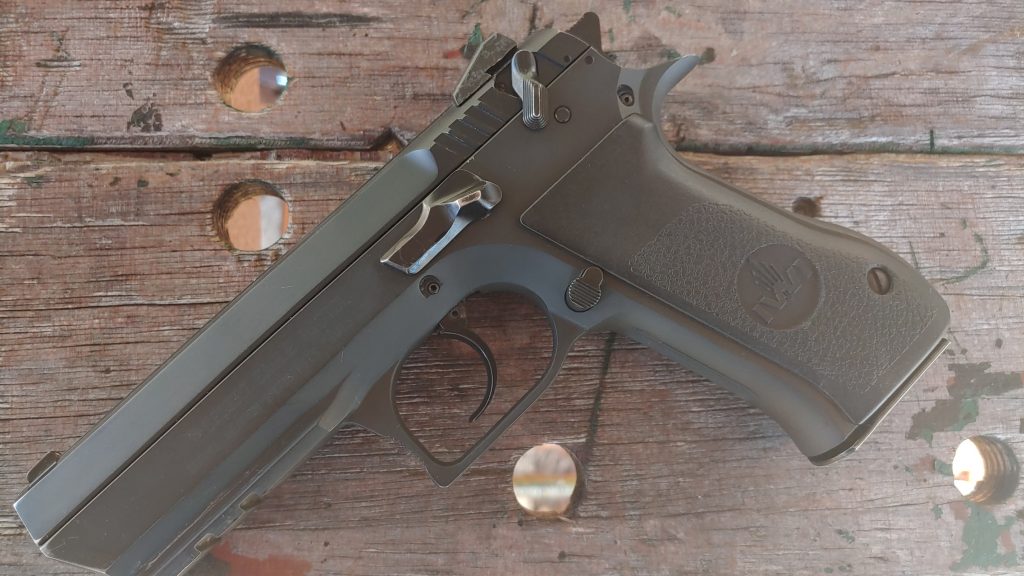 This gun went on to be an extremely successful pistol with Israeli police and security forces and was imported to several countries to serve as a police and military pistol. The Jericho was also a successful pistol on the American civilian market. In the United States, it was introduced as a 9mm pistol with the ability to convert the gun to the 41 Auto Express.

The 41 AE round falls between the 10mm and 40 S&W in power. It was a neat round, but like many new rounds, it died a quick death. 41 AE is now a collectible round, and the ammo and barrels go for a high price.

The Jericho is also a pop culture item. It’s been in tons of movies, and tv shows, but never achieved that name brand popularity that James Bond’s Walther PPK did. The closest to name brand love was the anime, Cowboy Bebop, where the Jericho served as the hero gun. Unless you’re a weeb, you probably don’t know what that combination of words means, so don’t worry about it. 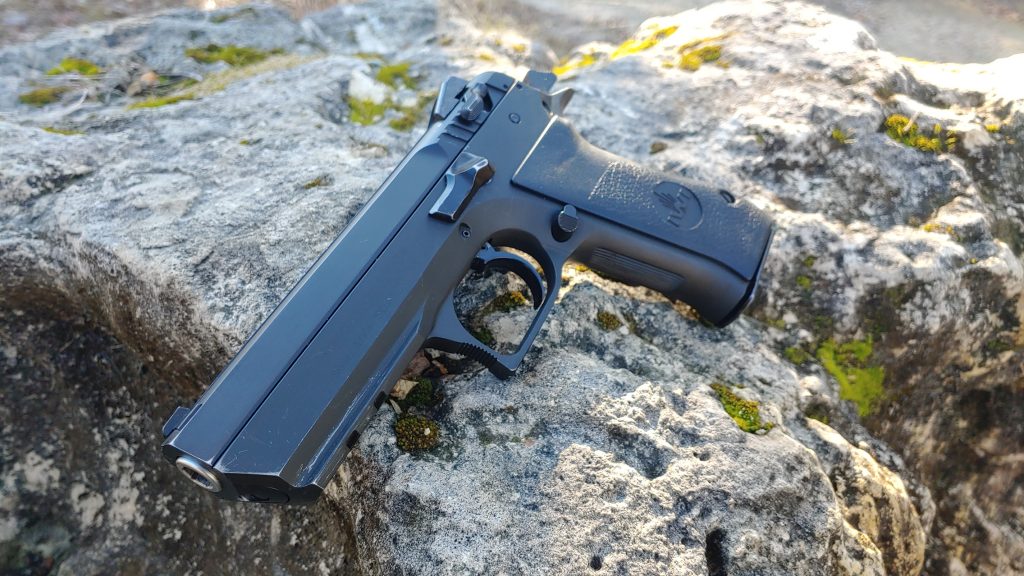 As a kid, my fascination with the pistol came from a television show called Burn Notice. The Jericho was never one character’s favorite gun, but it was most typically a gun used by the villain of the week or the villain’s thugs. The Jericho popped up in all seven seasons of the television show and sent me on a search of 2008’s internet to try and find what the gun was. I scoured forums made accounts to ask. I finally found the name and never forgot it. 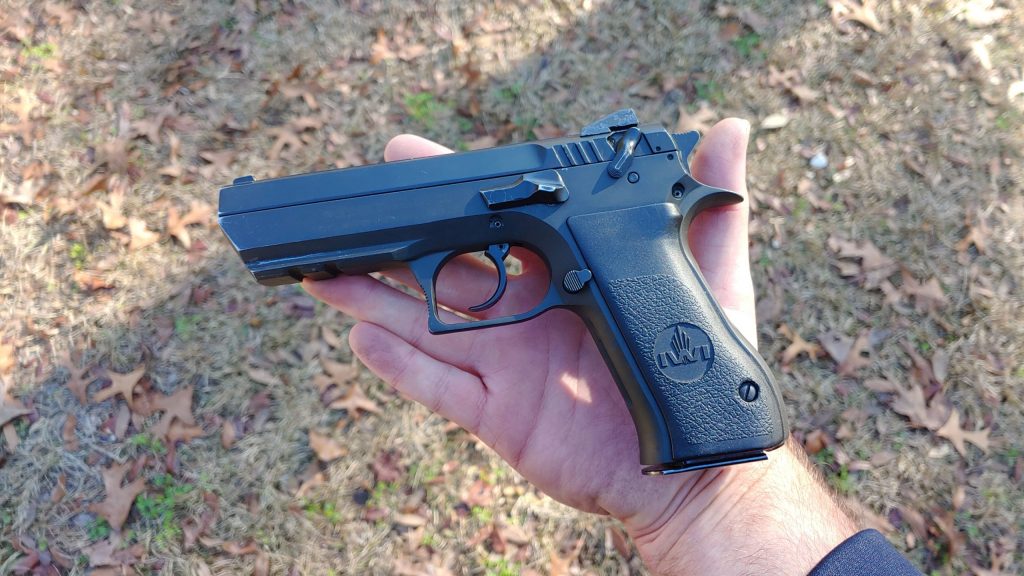 The Jericho’s name is much like it’s look, unique. The gun has a shark-like appearance that caught my eye. It cut a unique figure, and as a teenage contrarian, anything that wasn’t a Glock or a SIG appealed to me. From then on, I knew I wanted a Jericho. Well, now I have one. If you dream it, you can do it, kids!

The Jericho in Real Life

It’s tough to describe the Jericho because so many damn models exist. I can describe mine, and even it’s not the ‘classic’ design. The Jericho I own is an IWI model labeled Desert Eagle Pistol imported by Magnum Research. For a period, IWI/Magnum Research marketed these pistols under this brand name to capitalize on the popularity of the Desert Eagle pistol in the 90s and early 2000s. 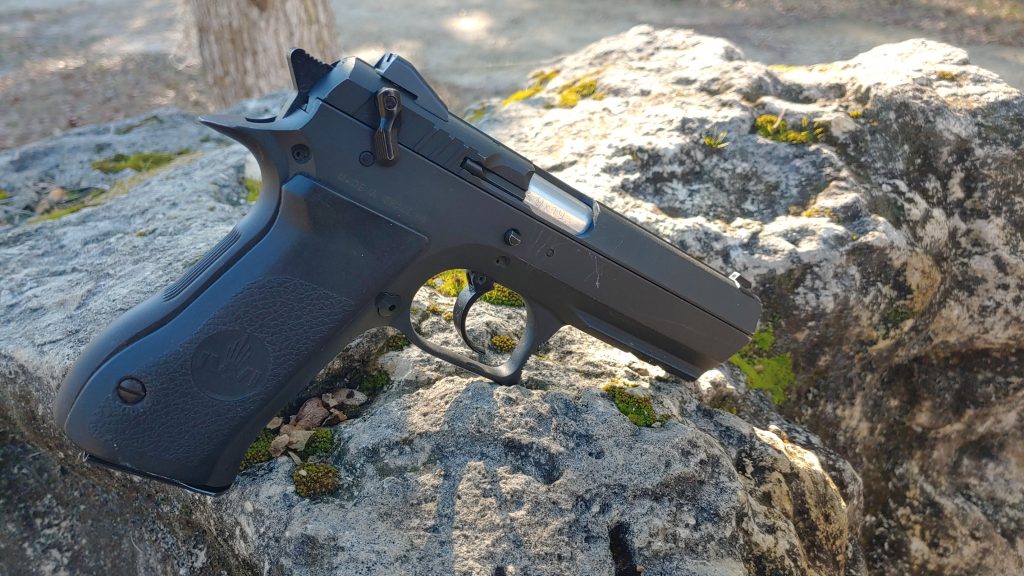 It was like IRL search engine optimization. The Jericho is in no way a Desert Eagle pistol. The only similarity they really have is the barrel end has that sloping downward design. The original Jericho had a frame safety/decocker and lacked a rail. My model implements a rail and a slide-mounted safety. I prefer frame-mounted, but the Jericho has that short CZ style slide that makes it easy to reach the safety.

The Wide World of Jericho

There are tons and tons of various Jericho models out there. From IMI/IWI and Magnum Research. The IWI variants are more traditional Jerichos with Jericho markings and metal frames. IWI discontinued their polymer frame models, but they are still bouncing around. The modern metal frame models sport frame-mounted safeties that allow for cocked and locked carry as well as a rail. IWI only produces 9mm models these days. 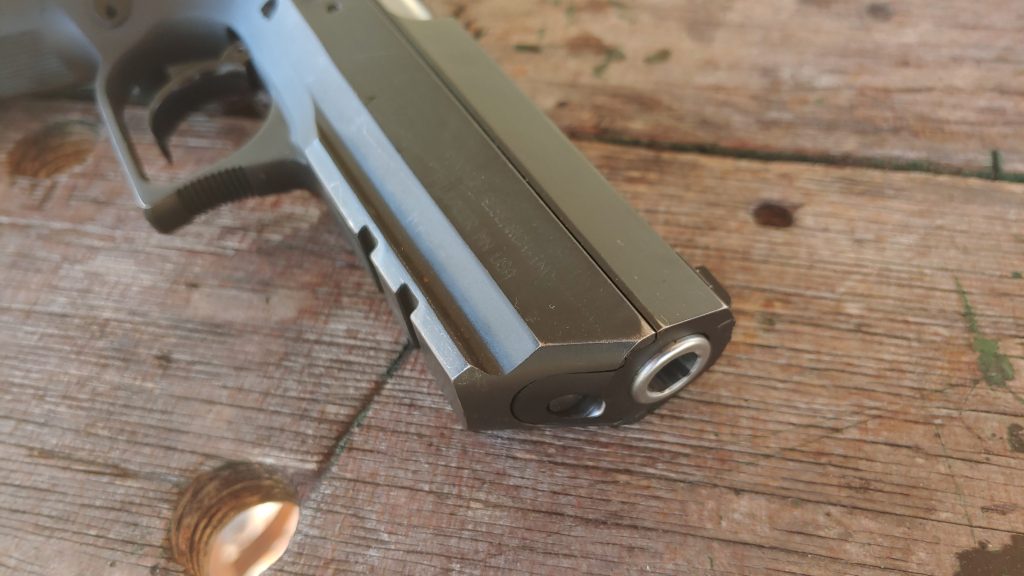 Magnum Research imports “Jerichos” labeled as Baby Eagles built by Israeli firm, BUL LTD. Magnum Research imports polymer and steel-frame models in multiple calibers including 9mm, 40 S&W, and 45 ACP. Numerous oddball Jerichos are also floating around, including single stack 40 S&W models, subcompact models, some marked UZI, and more. It’s tough to find and detail all the various models that have come and gone, but they all share a typical design influence and handling characteristics.

A hefty all-metal frame adorns the Jericho, as well as simple rubber grip panels. The frame feels all CZ 75, and that’s a good thing. Ergonomic grips are the bread and butter of CZ firearms. The grip glides into the hand and greets it like an old friend. A massive beavertail protects your hand from hammer strikes and allows for a nice high grip. 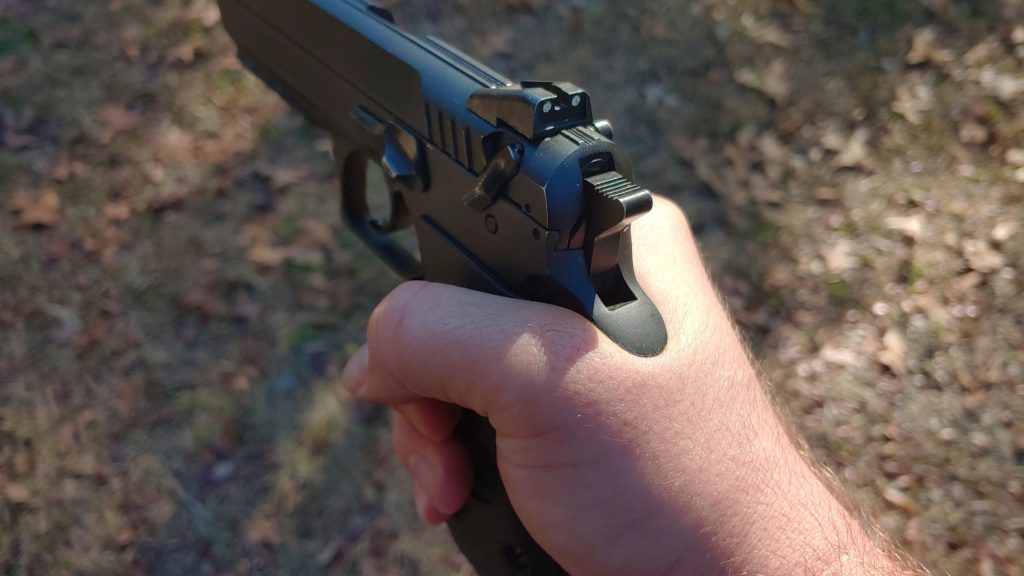 Jericho’s CZ inspired design means the slide is diminutive. That makes the ole slingshot odd until you get used to having very little slide to grip. Another reason I don’t hate the slide-mounted safety is that it gives you’ wings’ to grip as you manipulate the slide. 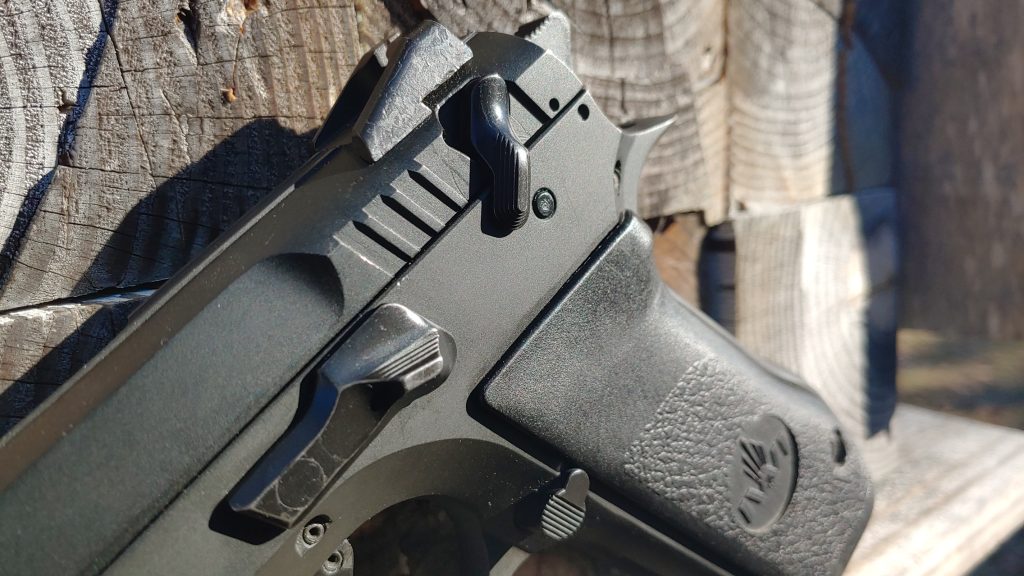 Hefty is a nice way to say that this is a fat bottom girl. At 2.3 pounds unloaded, the Jericho is dummy thick. However, the combination of a heavy frame and a small slide do a good bit to help with recoil.

Control-wise the gun is well designed. The safety is easy to reach with your thumb, and the magazine release is perfectly acceptable. What stands out is the slide release/lock. First, I got big hands, and with the majority of handguns, my thumbs pin down the slide lock. When I run a gun dry, the slide won’t lock to the rear in most cases. 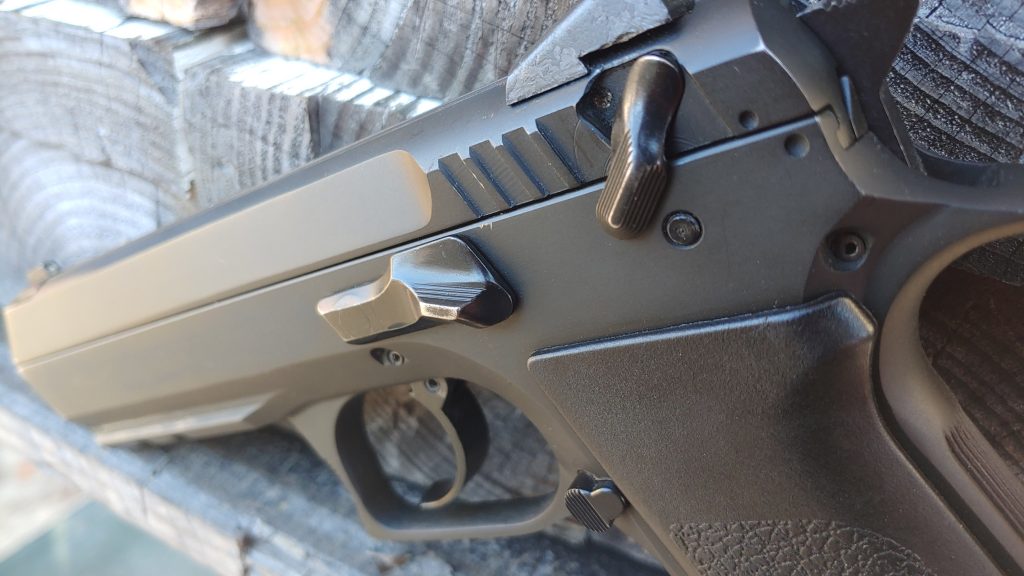 That’s not the case here. My thumbs sit far enough away that the slide lock remains unmolested. Another thing, there is this debate about slide lock vs. slide release. Say what you want, but this is a slide release. Its design is a giant shelf that gives you massive leverage to drop the slide.

How’s the gun feel when the hammer goes bang? Well, it works brilliantly, to be honest. Recoil is very low and accommodating. The Jericho is superbly soft, shooting in 9mm, and is easy to control and handle. This would be a great pistol for a somewhat new shooter who wants to move from rimfire to centerfire handguns. 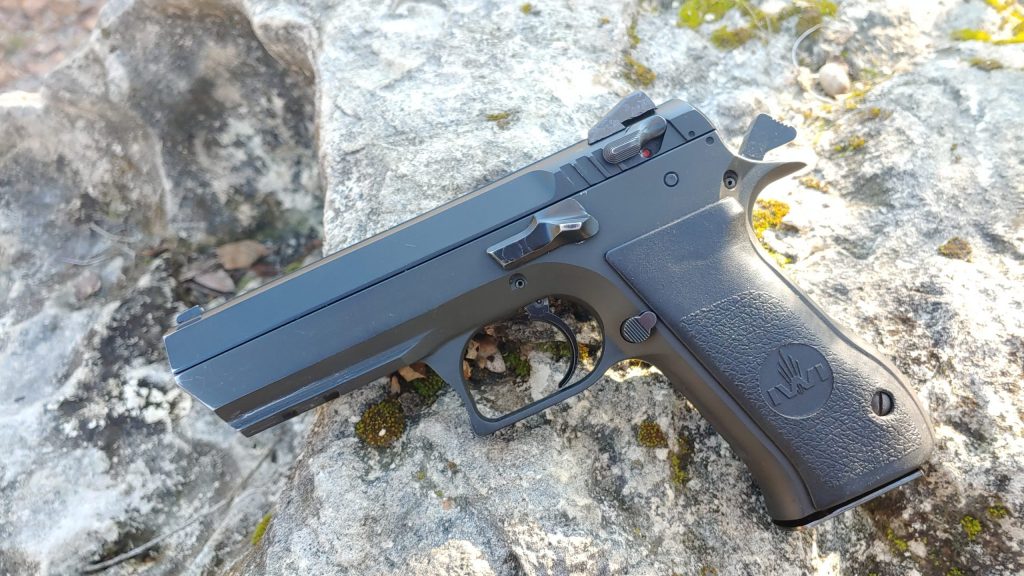 I purchased the pistol second hand, so it could have an upgraded trigger, but I doubt it. The stock trigger delivers a smooth double-action trigger pull that is long but somewhat light. It’s not as heavy as most double actions, but still heavy enough. When you pop the trigger into single action, it gets even better. The Jericho’s single-action trigger is lighter than my CZ 75’s SA trigger and is equivalent to my Cajun Gun Works Improved CZ P09 trigger. 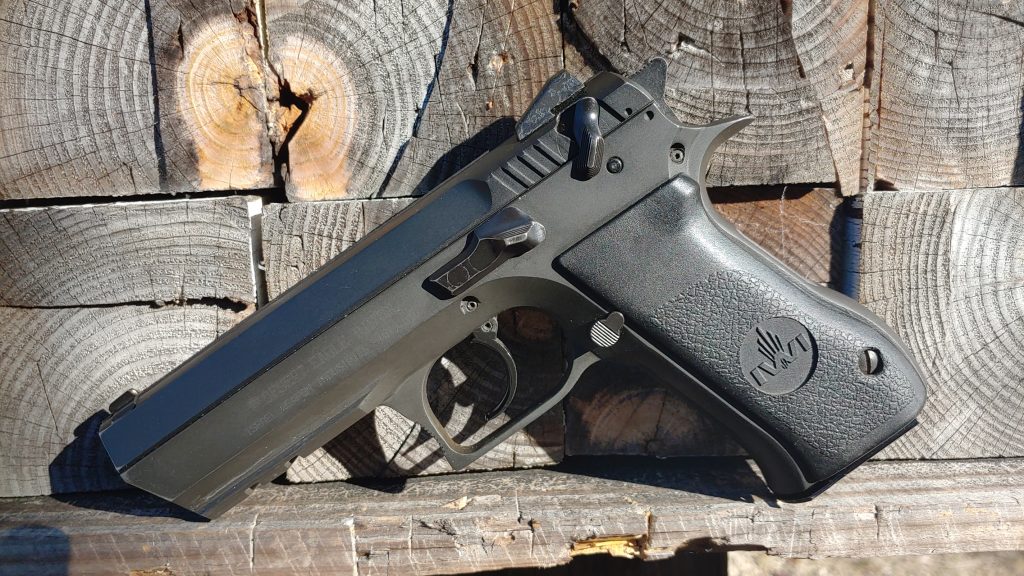 A light trigger makes it easy to shoot the gun accurately. As a full-sized handgun, the Jericho performs well. It’s accurate enough at 50 yards to hit a bad guy in the chest, and headshots at 20 yards are laughably easy. Hitting small targets or running B-8 drills are super simple and easily completed with the Jericho.

Ringing steel with the Jericho is deeply satisfying. IWI did it right with the Jericho, and this gun’s been bouncing around for the last 30 years for a reason. The Jericho is an outstanding pistol that built upon the success of the famed and well-beloved CZ-75 pistol. As a CZ-75 fan, the Jericho is a beloved addition to my stable of CZ inspired firearms. Get a new one, get an old one, it doesn’t matter, you’ll love it.