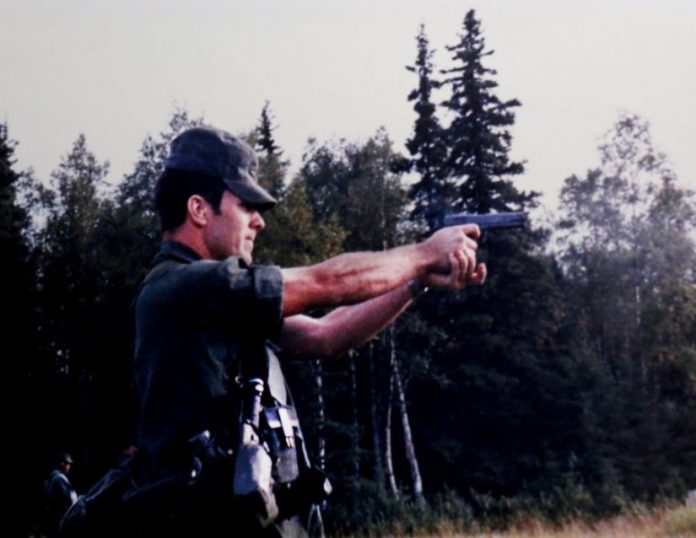 I’m a gunslinger by background, or at least I fancy myself the sort. I still wear my pistols low these days, just not quite as low as in the day. l live, nonetheless, today as I have always lived—by the sword. And you know what living by the sword means. That’s right, it means being unable to sleep at night because of the loud, late parties the sword is always throwing.

Why I like the 1911 for taking care of business

Now, in the day, we often jokingly referred to any 9mm pistol as a ‘sub-caliber device’, we pompous barbarians, the gunslingers of Delta Force. Our primary choice for a secondary (backup) firearm was the M-1911 .45 caliber blazer, legacy of the venerable John Moses Browning.

Never in modern history of U.S. ordnance have weapons remained in DOD arsenals for so many consecutive years without major modification or attempt to compromise the weapon’s intended ballistic capabilities as those introduced by John M. Browning.

I am put in mind of world-renowned small-arms expert Larry Allen Vickers of Vicker’s Tactical as he admonished a class he was giving on the operation and maintenance of the revered M2HB heavy machine gun:

Men, if John Moses Browning were to walk through this door right now…well, first of all we’d shit ourselves because Browning has been dead for over a hundred years…but then he’d say ‘do you men have and clue at all what you are doing?’”

There was no option to train with another caliber of pistol in the Delta training course for new operators; this was standard issue and would be mastered to successfully pass the five-month course. Mind you, the 1911s in the unit are not issued as they are unpacked from depot; they are meticulously modified by The Unit’s armorers to recognized match-grade standards:

Yes, the M-1911 is the pistol of choice in Delta, where there is never any guilt of pretense for its killing/stopping power. Yea though it be a beast to control, the pay-forward of the gat is rewarding.

The effects of the .45 jacketed metal slug can be likened to one of two basic classes of explosives, that is a low explosive versus a high explosive (takes a deep breath as he attempts to explain it without losing his audience):

High explosives such as C4 ‘plastic explosive’ expand (explode) at a very high rate of 26,000 feet per second (FPS). It burns fast and hot and has tremendous cutting potential against metal and the like. I compare it to the M4 assault rifle’s cartridge that sails along at over 3,000 FPS. It is supersonic, tends to penetrate very easily, and when passing through the human body, renders a high-velocity rifle cartridge wound.

The much lower velocity .45 Automatic Colt Pistol (ACP) cartridge, at 825 FPS, is well under the realm of supersonic, doesn’t impart the same acute cutting properties, but delivers devastating knockdown power. This round can be compared to the low expanding velocity of dynamite, TNT, and ammonium nitrate. These create more of a pushing, fracturing force that is ideal for moving large volumes of earth—such as in mining operations.

How ‘slow’ does the ACP round travel? I can tell you that, in my experience, the round moves slow enough to see with the naked eye.

“Bull crap!” you bellow out at my reckless and ingenuous suggestion.

I stand before you today a man solemn and grim in my claims. You can, in fact, under many conditions, see the .45 ACP fly through the air from behind the gun. Even from a flanking observation point, you can glimpse the shiny copper jacket as it crosses a dark background. From behind the pistol, a well-seasoned shooter can actually see the bullet arc up slightly and slap the paper of the target downrange.

An even more seasoned shooter (I have never seen this) can detect tiny specks of brass where they explode out of the chamber when the weapon cycles its reload phase. I felt inadequate when my brother, Samuel Booth Foster, explained how he was aware of the ephemeral specks of brass. But that comes from a brother who could watch a spinning ceiling fan and fix his gaze on a single turning blade.

“Incredible that you can do that, Sam!”

“Weak genetics that you can’t do it, George.”

Over my years in Delta, I maintained a cartoon book, a book of quotable quotations, and a Delta sayings and ‘non-sayings’ book. The lattermost book was made up of two parts filled with things you never hear in Delta, and then things you only hear in Delta. Those include the following:

Things you only hear in Delta

“Hey, has anyone seen our machine gun lately?”

“Well, I don’t have my parachute altimeter…I guess that’s the same thing as having turned it in.”

“Ft. Bragg is getting an allocation of nine of the new Javelin anti-tank rockets. Our cut is…nine.”

“The post military police (MP) were bitching that we were using up way too much of Ft. Bragg’s allocation of .45 ACP. The MPs now carry Berettas.”

“We’re going to work through lunch and dinner so we can get off early tonight (and then never actually get off early or get lunch/dinner).”

Things you never hear in Delta

“We’re using blanks and practice grenades on the objective tonight.”

“I’m sorry, Sergeant. You can have either the mash potatoes or corn; you can’t have two starches.”

“You need to get that mop trimmed, stand a little closer to your razor, and get that lid in travel lock, Mister!”

“Get your hands out of your pockets!”

That last one—“my pistol doesn’t work”—yeah…what actually does that mean anyway? OK, so I’m just going to be an elitist ass and say that my gat was where it was at. I had the same two 1911s for my entire 10 years in the unit. Students graduating to squadrons carried all of their weapons and kit from training branch to squadron—there was no ‘training only’ pool of anything there. Everything was live, full caliber, no nonsense, and ready to go to war.

Author with first Special Forces Group (Airborne) during range fire in AK, with his M-1911

Reliability: The only malfunctions I experienced with either of my pistols were intentionally induced for the sake of practice. Every time I pulled the trigger, it went BANG, and a hole nearly a half inch in diameter opened up somewhere bad.

Durability: I once had my pistol come out of its holster and fall five stories onto concrete. It did NOT discharge on collision, though there was a round chambered (of course). I fired it for a week after, then decided I should get a technical inspection (TI) of my pistols, as I had never had one done. I mean when do these gats ever wear out? The inspection revealed a hairline stress crack in the lower, not associated with the five-story fall, and a sloppy ejector (not extractor) that was associated with the fall. My lower was swapped out with a Caspian or Kimber lower, the ejector (not extractor) was re-seated, and I was out on Pat McNamara-style blaze ops the same day.

Accuracy: Don’t get me started. What can I really say, right? I mean a match-grade gat, match ammo…how many excuses are left for not hitting your target? Yes, typically we did our combat pistol training at 25 meters. But on occasion, such as when world champions Jerry Barnhart and Rob Leatham came to train us, they would have us move back to 50 meters and try some outside-the-box drills. We would eventually move back to 100 meters or more, watching the shiny bullet arc up slightly, then rudely spank the steel target plate.

It’s amazing how far away the ACP can still be accurate, how high above the head of the target you have to hold off, and how long the slow-moving ACP takes to get to its target. Just when you think you have missed, CLANG!

Satisfaction: Immeasurable. There is a peace of mind unmatched knowing that you have one of the most powerful handguns in the world for the last 100 years holstered at your side. One that you know can come out very fast, is sure to send rounds down range every time, and has unprecedented knockdown power.

I’m a gunslinging man, yes I am. I wear my pistols low these days, just not as low as in the day. That’s how I fancy myself.

Lest I die in jest, I remain,
Geo sends

(This piece is dedicated to Mr. Rob Garrett)