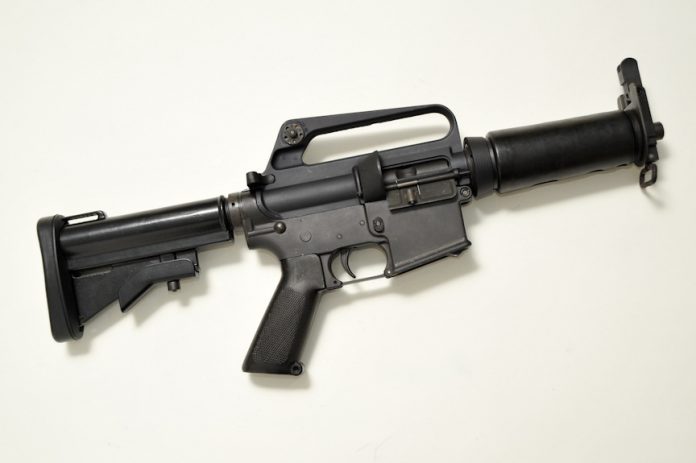 The 1980s was a tumultuous time for gun designs. We got some cool stuff that became iconic, especially in the world of submachine guns. One such submachine gun is the Department of Energy contract Colt SMG. It’s colloquially known as the DOE SMG. It’s fun to say, so I get it. Even if you don’t know the name of the gun, you’ve seen it before. Its striking appearance makes it quite memorable. Officially the DOE SMG is called the Colt R0633.

To understand the DOE SMG, you have to understand the Colt SMG. Colt hasn’t been creative for a very long time, and even in the 80s, they were riding high on the M16 design. Chambering the M16 in pistol calibers started with Max Atchison in the 1970s but didn’t take off until Colt got behind the idea.

Colt SMGs are simple guns that use a direct blowback system. This eliminates the gas tube and changes the bolt and bolt carrier group significantly. Colt took Uzi magazines, modified them, and bam, we got Colt SMG magazines out of it. These double-feed magazines hold 32 rounds of 9mm. They also offer last round bolt hold open compatibility and are relatively robust.

Why the internals and magazines have changed significantly, the gun itself is pure AR 15. You’ll notice a large brass deflector that also aids with blocking some of the gas generated from blowback guns. It mirrored the controls and ergonomics of a standard M16/AR15 design. For American shooters, the transition from M16/AR15 to the Colt SMG would be relatively minor.

The original Colt SMG, model R0635, sports a 10.5-inch barrel, a CAR 15 stock, and a modified M16 upper and 9mm lower with a magazine block pinned in place. The DOE SMG took the Colt SMG and gave it the German ‘K’ treatment and made it a good bit smaller.

Did you know the Department of Energy maintains an armed force of guards? Some are rather elite, and you have to be when you are protecting nuclear facilities. They needed firearms and dollars to donuts the 38 Specials, WW2 era SMGs, and pump-action shotguns they were armed with were not enough in a time of rising terrorism.

The Department of Energy wanted a submachine gun and went shopping. Colt presented them with the R0633 or DOE SMG contract gun. The Department of Energy wanted a short and light SMG that could be used in the confined spaces of nuclear facilities and inside vehicles. One of the DOE teams was the Office of Secure Transportation which guards nuclear materials during transport. You can see the reason why an SMG would be used for transportation purposes. It’s small enough to fit in a backpack, forget the AR 15 case.

The DOE reportedly chose the Colt model over the MP5. The DOE wanted something small, and the DOE SMG is super short. The barrel is trimmed to 7 inches, and the gun has an overall length of 21 inches with a collapsing stock. It weighed about a pound less than the MP5, at 5.9 pounds.

Colt employees jokingly called it the ‘briefcase gun.’ Department of Energy security personnel were also likely armed with M16 rifles, and the transition from the M16 to the DOE SMG was superbly simple.

A Closer Look at the DOE SMG

This odd duck uses an M16 style upper receiver with a fixed carry handle rear sight. The front sight folds downwards and out of the way. It’s an odd choice since the rear sight is fixed. The best explanation I’ve heard is that the folding front sight allowed DOE security to use the SMG through small firing ports built into guard posts.

I cannot confirm this, and I’m pretty sure the number of times I’ve googled “DOE guard shacks” has put me on a list. The front sight construction also housed your front sling post. 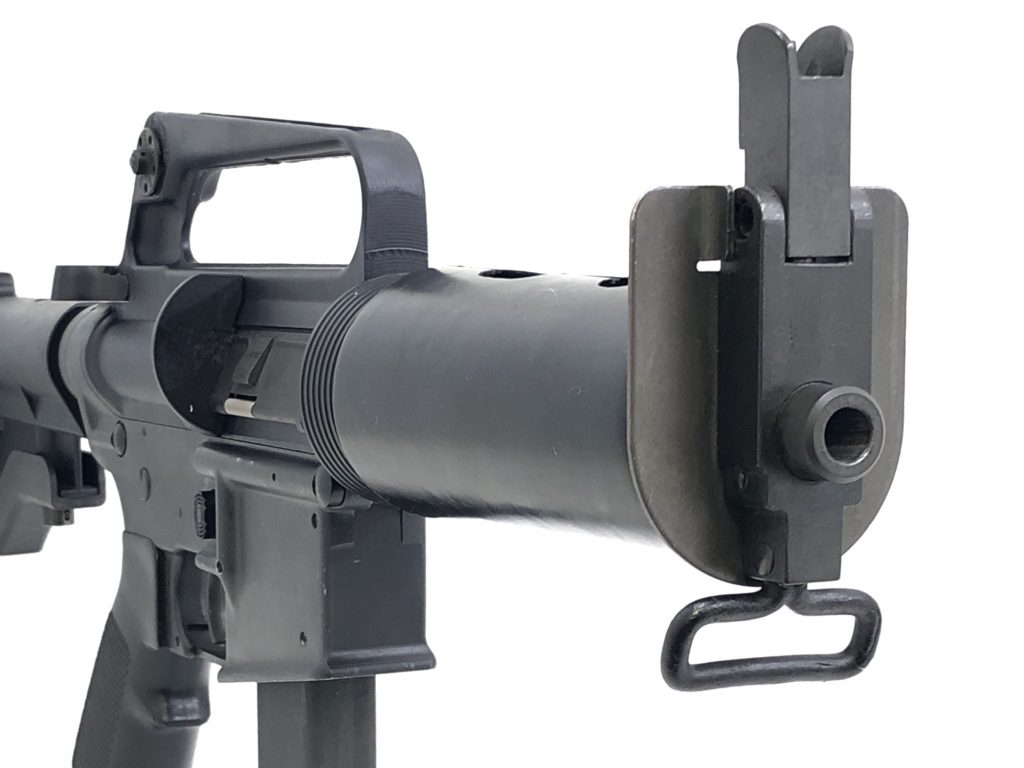 Colt took the handguard from the M231 Port Firing weapon and installed it on the shorty R0633 DOE SMG. You’ll see pictures of a prototype floating around with an aluminum forend, but as far as I can tell, this was never standard production.

The prototype also had the A2 nub style grip, but production models use the A1 smooth grip. Prototypes also featured an ambidextrous safety selector that was abandoned on the production model. Colt used the CAR 15 stock to give three positions of adjustment and a rear sling point.

With a firing rate of 700 to 1,000 rounds a minute, firing this fella on full auto would be an interesting experience. The DOE SMG guns were fully automatic and not restricted to burst functions. If the Office of Secure Transportation needed to escape an ambush on the road, the full auto mode could lay down a frightening amount of fire. Fighting through and escaping from an ambush requires you to lay down some lead, and you certainly could with the DOE SMG.

The 7-inch barrel is a great balance between size and ballistic improvement for the 9mm round. It adds a little bit of velocity but is quite compact for vehicle and halfway use.

Like most SMGs, the DOE SMG got beat by short carbines. We’ve found ways to create ultra-reliable carbines that are compact and easy to use in and out of vehicles. Rifle calibers provide ballistics that beat pistol calibers hands down. Modern OST agents are using M4 style carbines topped with red dots these days.

The DOE SMG might be dead, but cloners love the design, and it pops up here and there on the clone pages. Modern reproduction uppers are rare but not impossible to find. Small shops churn out small numbers of uppers at rather high prices.

If you want one, you can still build one, but other than that, the fascinating DOE SMG has since been retired. The DOE sold off the uppers years ago and likely cut the lowers into several different pieces. These fascinating firearms are an interesting piece of history, and I hope you fine folks learned a thing or two.