The Mossberg Shockwave and Remington TAC 14 series of firearms were massively popular a few years back. They remain popular now, but the novelty has worn thin a bit. If you’re not familiar with these two PGO firearms, they fall into the not-a-shotgun category. They have 14-inch barrels and a Raptor pistol grip that allows them to stretch out to at least 26 inches. These scatterguns replicate a ‘sawn-off shotgun,’ but due to their overall length and the fact they’ve never had a stock, they are not considered shotguns.

They are not shotguns, they are not pistols, and they certainly aren’t rifles. They fall into the ‘firearm’ category that’s essentially a catch-all for unusual firearms that do not fall into normal configurations. I love these PGO Scatterguns; I think they are a ton of fun, and the challenge they create makes them fun to shoot.

However, for the longest time, I thought they were basically useless. PGO Scatterguns were basically a fun range toy. My attitude on these firearms has shifted a bit lately. As always, I’ve been shooting a lot of shotguns and been heavily using the Rob Haught method of push/pull. I’m pushing forward with my dominant hand and pulling rearward with my dominant hand. This creates tension and reduces recoil.

As such, I noticed with a good push/pull, the stock barely has to grace my shoulder, and I could still be quite effective. That got me thinking, how effective could a PGO scattergun be in a practical scenario? I’ve always used the push/pull with my PGO scatterguns, but only recently have I gotten somewhat decent with the technique. (Don’t ignore shotgun dry fire folks.)

The Strengths Of A PGO Scattergun

Why the hell would you ever want a stockless shotgun over a stocked shotgun? Stocks are quite valuable for making that third point of contact on a firearm. However, when you trim the barrel and chop the stock, you get a very lightweight and maneuverable weapon. 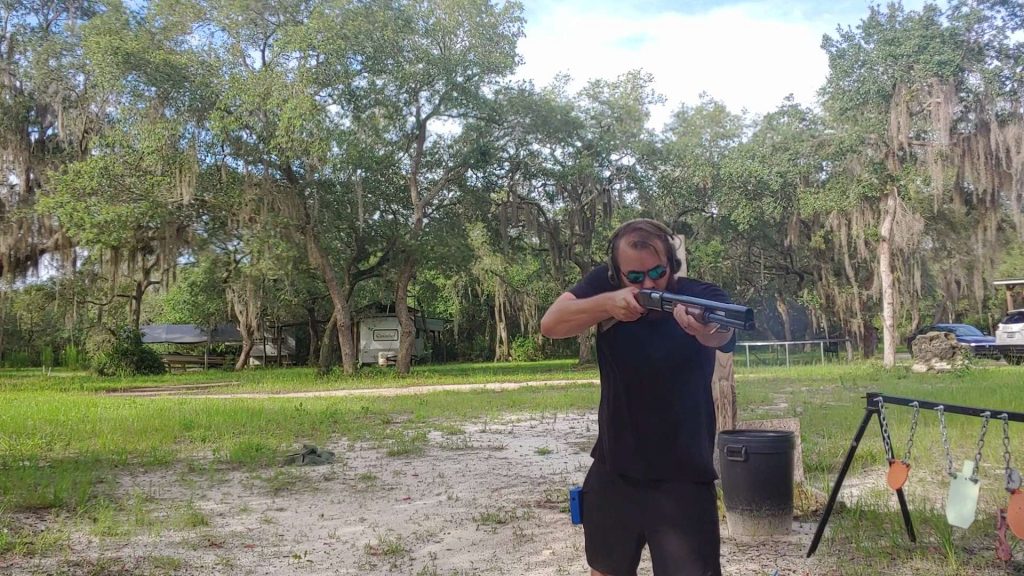 I did snapshots from the low ready measured by a shot timer. With the PGO Scattergun, I was able to get effective shots on target in under half a second. With the Stocked shotgun, my fastest time was .69, and with the PGO scattergun, my fastest time was .43 seconds. That’s a decent difference, and it comes from the fact that less shotgun is easier to swing up and target. No stock to navigate, no long barrel to swing on target, and it’s a shorter movement. 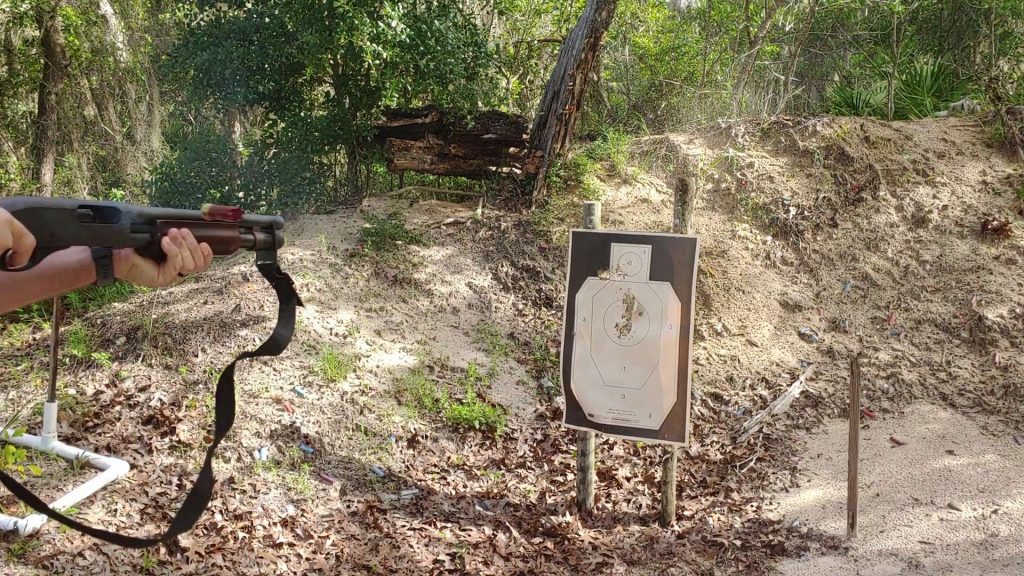 Being short makes the gun very maneuverable. Admittedly it shortens the range of an already short-range weapon, but in that quick, point-fire niche, it’s tough to beat. Sure, a handgun is even smaller and more maneuverable, but does it offer anywhere from 27 to 9 pellets of buckshot per trigger pull? At close range, you want the fight over as quickly as possible, and it’s tough to end fights faster than buckshot.

If a Shockwave or TAC 14 can be an effective fighting weapon, where would it fit in terms of use? It’s a fair question, and civilian application is admittedly limited. By law, these weapons cannot be concealed, and concealment seems to be open interpretation, so it’s not something you’d wear under a trench coat or even keep tucked away in the truck for emergencies. 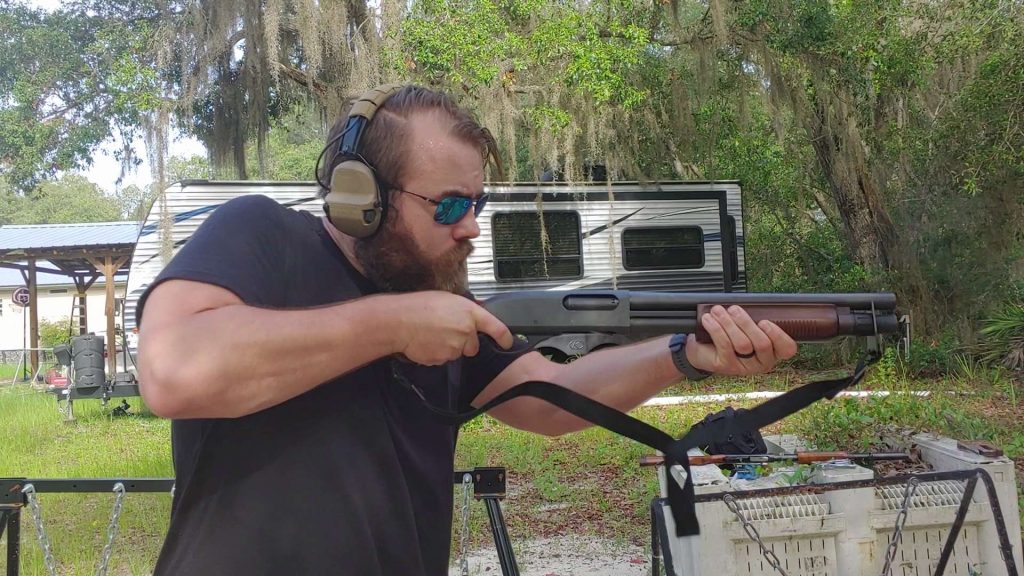 The U.S. Marshals created a short-barreled shotgun called the Protective Service Shotgun, and later, Bill Jordan created a commercial version called the Witness Protection Shotgun on this very gun. The Protective Service Shotgun was designed for protecting witnesses and high-value felons when used on the move. A PGO Scattergun works extremely well when you have to move in and out of vehicles.

It provides a piece of compact firepower that’s ultra maneuverable. Most of us aren’t U.S. Marshals protecting witnesses, but a PGO scattergun can still be used in similar situations. In the civilian realm, a PGO scattergun works extremely well inside a camper or an RV. I barely fit in these things, much less me and a shotgun or even a rifle. Heck, these would be great in a tent even.

The PGO Scattergun gives me an effective weapon for these bad breath ranges inside these super tight quarters. If laws regarding what’s considered concealment and what type of firearm you can legally carry inside a vehicle weren’t around, I could see the PGO Scattergun being great as a ‘truck gun.’

As a rural type, I could also see the PGO scattergun being handy for dealing with wildlife. A load of birdshot for snakes, buckshot for coyotes and hogs, and slugs fore bears. It’s super short and light and rides well on an ATV or side-by-side type vehicle. It allows for easy manipulation of the vehicle as well. I can grab it, aim, and fire it easily from a seated position on an ATV. Hogs and coyotes get an immediate death sentence from me, and being able to chase one down on an ATV and quickly take a shot is valuable.

Admittedly I like a Benelli M4 for home defense, but I don’t think you’d be outgunned with a PGO Scattergun. It’s small like a pistol, and it’s easy to maneuver if you have to move from one room to the other. You can easily open doors and navigate around tight corners with ease. It’s easier than a traditional shotgun or a rifle and provides more gun than a pistol.

How To Be Effective With a PGO Scattergun

Any effective use of a weapon depends on your ability to handle it. That being said, the PGO Scattergun isn’t a gun for everyone. It does have a specific technique that requires some upper body strength to wield. Smaller and weaker shooters shouldn’t look to the PGO scattergun as a solution. It’s not fair, but neither is life.

To be effective with these guns, I do feel you need to use a good push/pull technique combined with an athletic stance. Your front hand does most of the work with the gun. You should be pushing forward with intensity as if you want to strike the target with the barrel. The rear hand pulls back and keeps it under control. You should feel it in your shoulders. 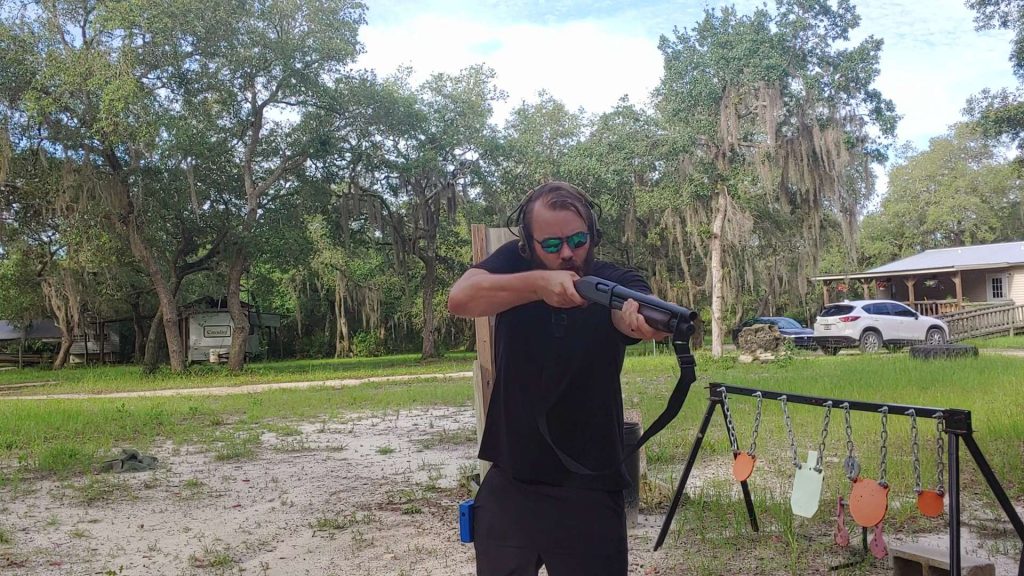 You want a tight grip on both parts of the gun. If your forearms aren’t engaged, you aren’t gripping tightly enough and will lose control. Shooting gloves help, but can’t do all the work.

Lastly, choose reduced recoil ammo. I use Flitecontrol, but I mostly train with birdshot, followed by full-powered buckshot. When I move to reduced recoil loads, I have zero issues controlling the gun. I would even say those 2.5-inch shells from Nobel sport might be a good choice. They offer six pellets of buckshot, function fine in pump guns, and allow you to pack one extra shell.

The PGO Scattergun will never replace a dedicated fighting shotgun equipped with a stock. A stock allows you to maximize the range of a shotgun. A stock makes it much easier to reload the gun, and stocks reduce the margin of aiming error and improve consistency. A stocked shotgun will always be the go-to war option.

A PGO Scattergun fills a gap between the pistol and the long gun. It’s not quite either, but it packs the features of both. It requires a good amount of practice to be effective with and training to maintain those skills. In that gap, it’s tough to beat when you need a light, maneuverable, and powerful weapon.