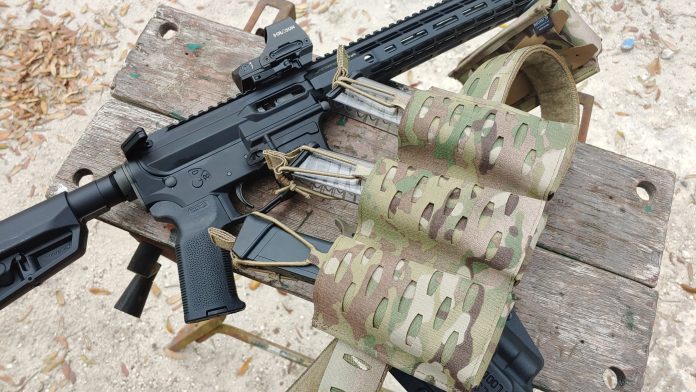 It’s been almost a decade of PCC supremacy. People love PCCs, and I’m one of them. Ever since I got my EPC, I’ve realized there are no dedicated PCC drills. The PCC differs from the rifle and the pistol, and I was curious what PCC drills could be handy to fellow PCC enthusiasts.

As someone who wants to try USPSA PCC, I started watching videos and examined what those competitors faced. I kept that in mind, as well as the typical combat-oriented drills people know and love. I also tried to keep the logistics light to make it easy for everyone to get some training in. 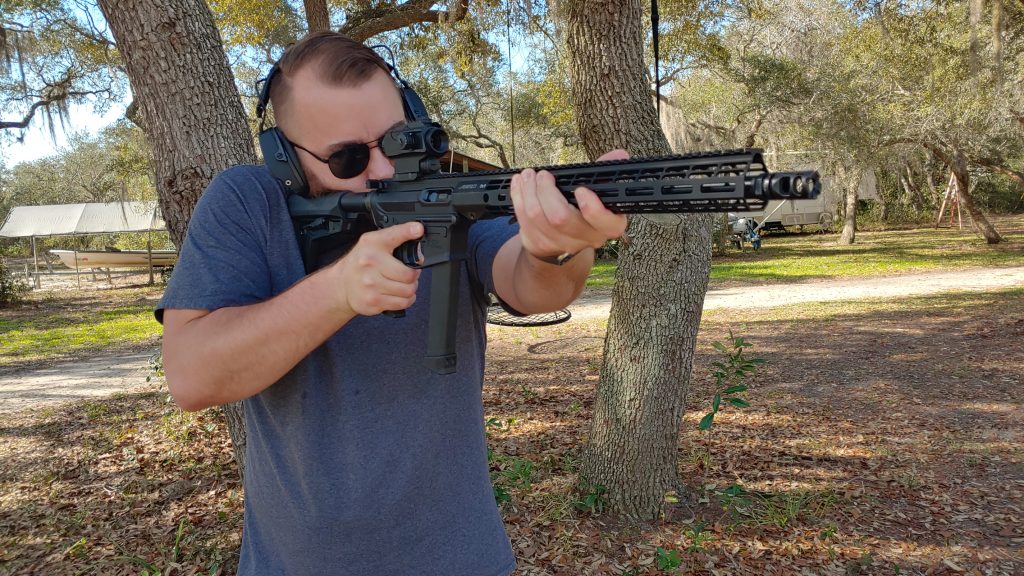 What I came up with was some original drills, as well as a combination of both pistol and rifle drills that are proven winners. PCCs fall somewhere in between a pistol and rifle, and it tends to benefit from drills designed for both.

Near and Far, Big and Small

Inside of 50 yards pistol caliber carbines rule. Heck, out to 100 yards a 9mm rifle does okay. At close range, the guns are quite precise and ultra-easy to shoot and handle. PCC drills should address the strengths and weaknesses of the platform. One of the first things I noticed in USPSA is the wide variety of targets they engage, and at the various ranges, they engage them.

You’ll need both precision and speed to compete. Being precise and fast is an applicable skill set for most firearm disciplines. With that in mind, the Near and Far drill calls for targets at a variety of ranges. Some near you, some far from you. Range conditions can make this tough to do, so instead of mixing up ranges, grab a large and small target. 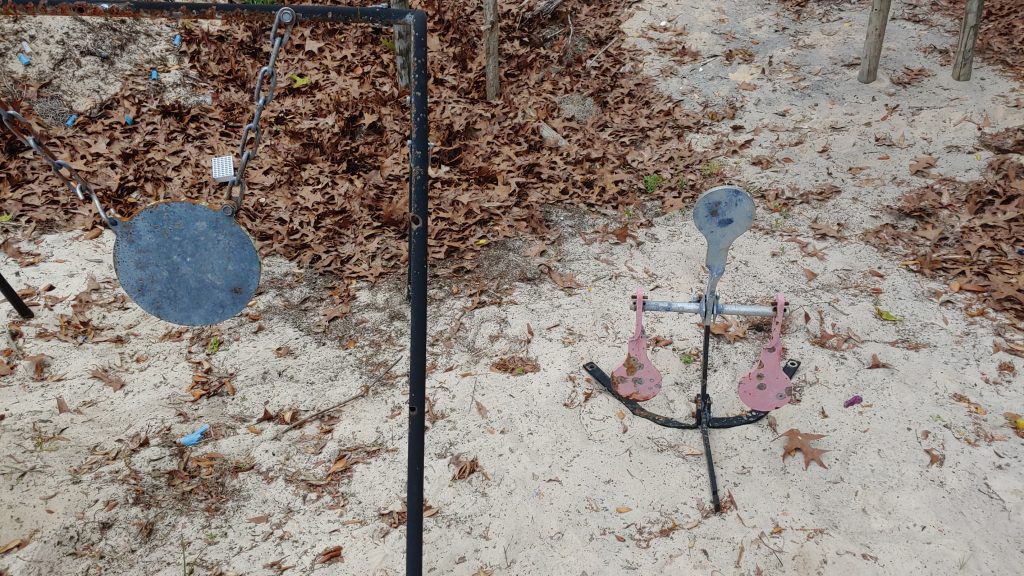 I use steel targets. I have a 4-inch gong and a 10-inch gong that work perfectly.

Start in the low ready,  20 yards from the targets. Engage the close target (the bigger one) with three rounds. Then transition to the far target (the small one) and hit the target once. Set a par time to 5 seconds.

A miss is a failure, as is going over 5 seconds. It’s a generous time, and in the first run, I scored an almost 4 second run with the EPC. Feel free to adjust the time to kick your own ass.

The VTAC 1-5 Drill does not fall into the typical set of PCC drills. It was designed around the standard carbine and challenges you to shoot a target way more than once or twice. It’s easy to get wrapped up in the double-tap and assess mindset. You’ll need three targets, preferably man-sized set up five yards from the shooter. 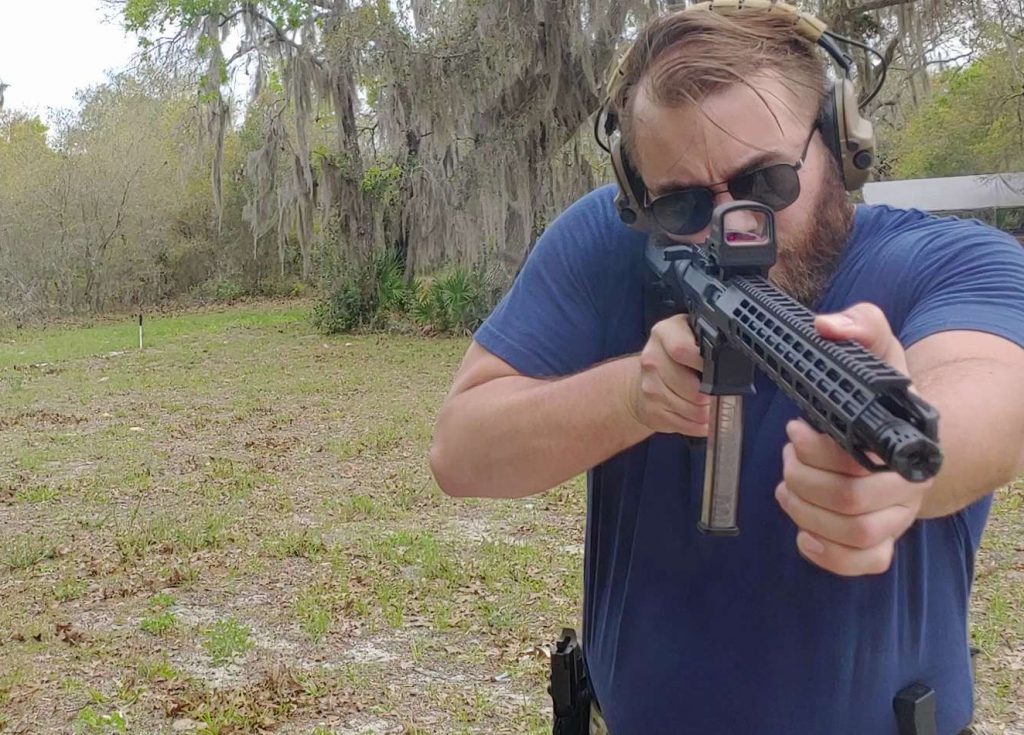 If you can score under 5 seconds, you are doing pretty good. 3.5 seconds is smoking it. You’ll want chest shots, A Zone, especially if you are going for USPSA wins. This drill helps you learn transitions, control over the weapon, and how to work the trigger.

El Presidente is Jeff Cooper’s famed pistol drill, but over time it’s been adopted for various platforms. For our PCC edition, we are going to bring the range to 20 yards. You’ll need two magazines, each loaded with six rounds, and a means to hold a spare magazine. We need three man-sized targets. 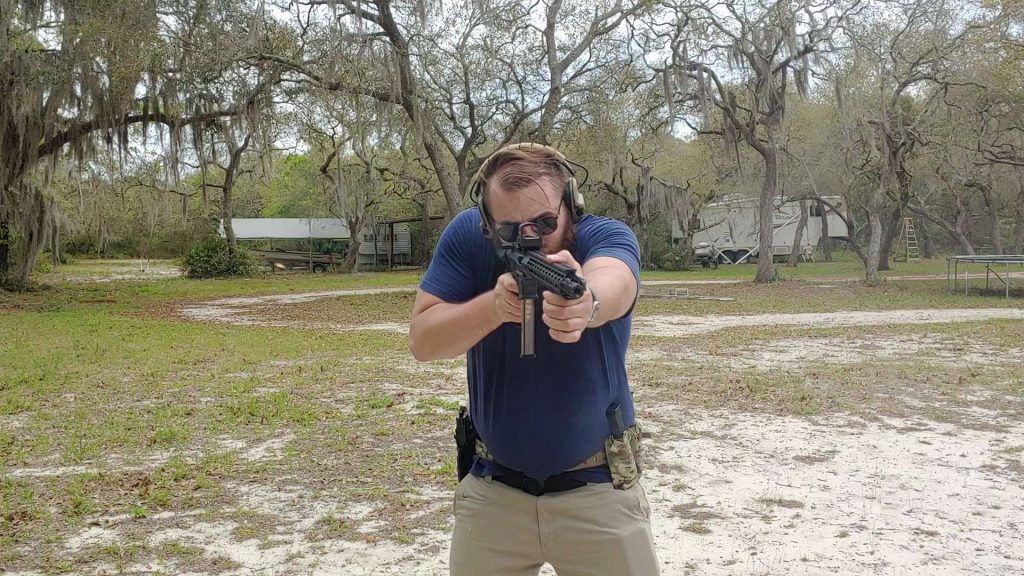 My EPC is topped with a VG6 PCC muzzle device that acts as both a brake and a compensator. This reduces felt recoil and muzzle rise significantly and makes this drill quick. Plus, the third point of contact with my shoulder against the stock makes it too easy. So we have to shorten the time.

Let’s say 7 seconds with zero misses is a pass.

Reloads are the key to the successful employment of any magazine-fed weapon. When a gun runs dry, you want to reload and get it back into action. In USPSA, reloading skills are important, and you want a few PCC drills that focus on reloads. So with that in mind, let’s work reloads. This PCC drill will require 15 rounds of ammunition, at least three magazines, but four is best.

You’ll load three of your four or two of your three magazines as randomly as one person can. A better method is to have a partner load it. To do it by yourself, I recommend watching Letterkenny and grabbing 1 to 3 rounds at a time and alternating magazines until all 15 are gone. The purpose is to make you reload tough to predict. 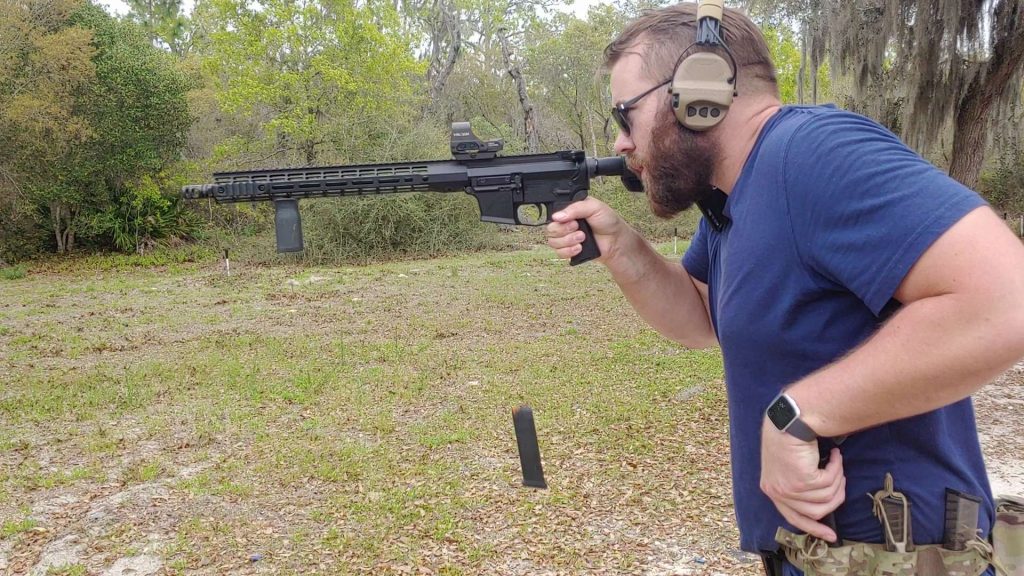 Range and target are the shooter’s discretion. Put your empty magazine into the gun and lock the bolt to the rear. A timer is optional but highly encouraged for measuring performance. At the buzzer, reload and empty the magazine into your target.

With the EPC, reloads are rather quick. The flared magazines well, massive magazine release button, and last round bolt hold open make reloads quick and intuitive.

Repeat the same action over and over until you’ve run each magazine dry. You’ll build your skills to reload without making your reloads predictable.

Remote brutality was an interesting take on competition shooting from InRange Tv’s Karl Kasarda. Since Covid killed their shooting competition, Karl released an at-home version of the competition. The contest is over, but the drill itself is still rather fun. 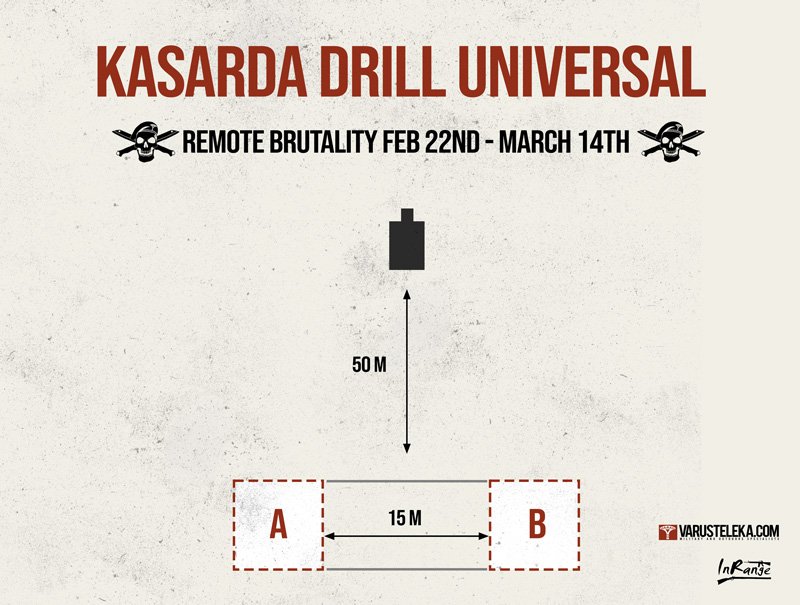 A kettlebell, rock, backpack, or another item you can throw around weighing 20 kg (44 lbs). In the instructions, this item will be referred to as the kettlebell.

There are two boxes marked on the ground, A and B, with a distance of 15 meters

Shooter starts standing in Box A or Box B, with the rifle fully loaded, on safe, held at low ready.

The kettlebell is in the same box with the shooter on the ground.

How to perform the stage:

At the buzzer, the shooter will go prone next to the kettlebell and acquire one hit on the target. 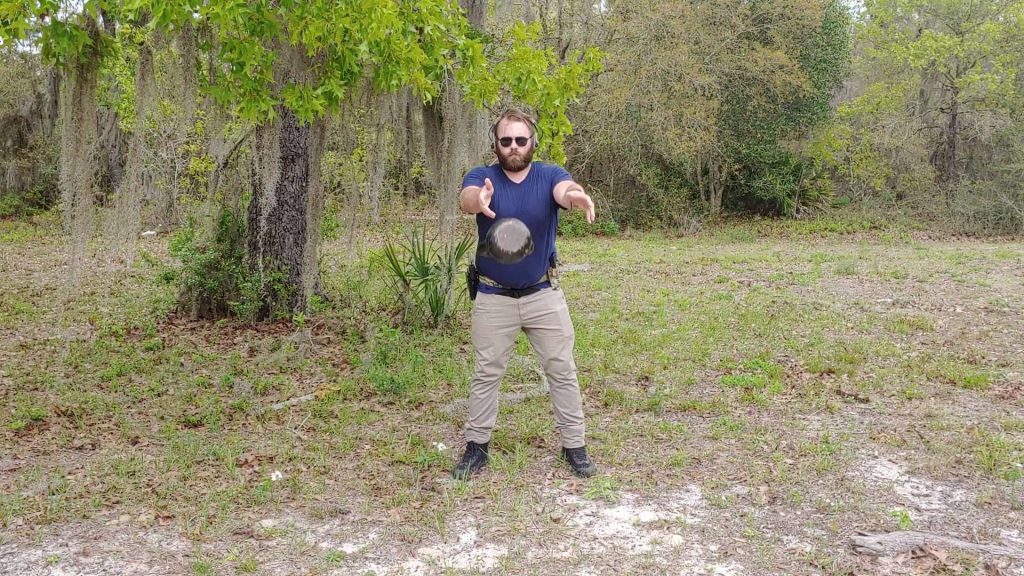 Grab the rifle, go prone next to the kettlebell and acquire one hit on the target.

The shooter will continue in the same manner until the kettlebell crosses the fault line of the opposite box.

Shooter goes prone next to the kettlebell in the box and acquires one hit on the target.

Shooter will continue back towards the first box in the same manner and continue this until the 180 second par time expires.

The kettlebell needs to be thrown underhand with one or two hands. The shooter may not spin or shot put it.

• Remove 10 seconds from the 180 par time for each hit made from the A or B Boxes after the first one.

• Hits from between the boxes do not count towards the final score; they only allow the shooter to move forwards. 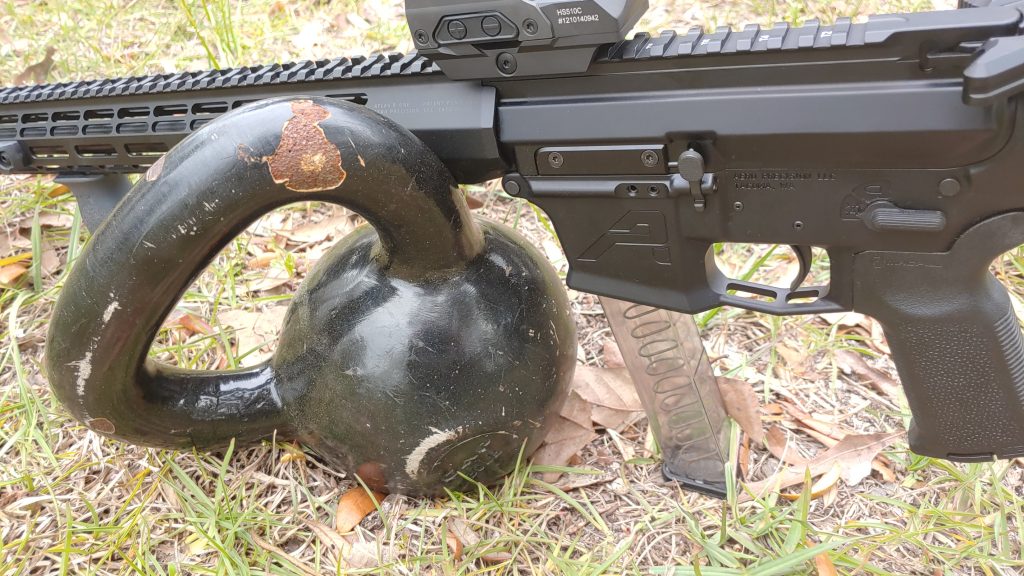 This gets your blood pumping and your heart racing. It challenges you to shoot when shaky and to put a little physicality into your shooting. Since you aren’t competing in the contest, feel free to lower the weight if 44 pounds is too much to handle. Also, feel free to increase the weight. As far as PCC drills go, this will help you get you jacked and adrenalized.

PCC Drills For All

Since I got my EPC, I’ve been getting lots of practice in. My intent is to try the USPSA PCC games soon, and my goal for my first few matches is to just not embarrass myself. Not only have I been watching a ton of videos of champs making runs, but I’ve been trying to replicate some of the things I see in the forms of various drills. At the same time, I’m still focused on the defensive aspect of rifle shooting. Hopefully, you fine folks have a few new PCC drills to improve your skills with.