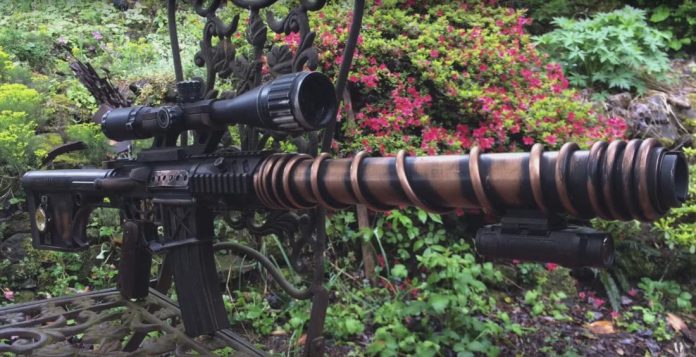 The guys over at Fire Mountain Outdoors, as part of their Epic Build series, created functional artwork in the form of a copper, compass and clockwork-accented AR-15.

Created primarily as an art piece in the steampunk style that would spend most of its time on display, it can still make trips to the range when needed.

Featuring a GRG Krinkov muzzle device, a custom copper tubing hand guard, a re-purposed pistol quad rail, some carriage bolts, an Aero Precision upper with a PSA bolt carrier group and some plumbers tape, a Daytona Defense skeletonized lower with some old clock gears and a Pierce grip with some gently modded 1911 grips., the rifle makes a statement. The buttstock is from Luth AR accented with a copper compass while the finish is by Krylon, properly scuffed.

In the end, it fires and looks kinda groovy if you are into steampunk. If you aren’t, it’s just a weird looking AR that is still much capable of making 5.56mm holes.

And there is nothing wrong with that no matter what your feelings on top hats and dirigibles.