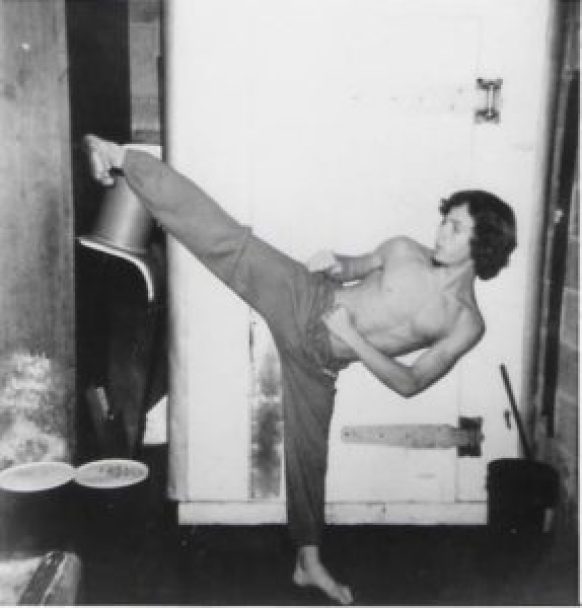 Editor’s note: This article was written by legendary Delta operator and personal hero of mine, George E. Hand IV.

(Dedicated to my brother LPD256; love ya madly)

This essay we shall, for the sake of the political season, refer to as my ‘Concession Speech.’ I have received to date a common core battery of questions, the top subjects of which fall into either a ‘Weapons and Tactics’ container, or the other heavy hitter, ‘Combat Physical Fitness Training.’ To this point, I have conceded to proceed with my account of my own physical training regime while serving with the Delta Force.

I am a physically fit sort of fellow, that I am inclined to fancy of myself. I started a deliberate personal physical fitness program at the age of 13 years old, motivated by the prospect of learning a hand-to-hand martial art. In my case, Ed Parker’s Ken Po Karate, a Chinese system by claim, with a Japanese title by sheer dumb luck that some punk white kid in Arizona would know the difference and call them out.

My first lessons came from a high school mate who studied the Okinawan system of Sho Rin Ryu. My mate was not a fighter; he trained for the sake of perfection of technical form in kicks, strikes, and in Kata. His form was impeccable; he could lift his leg into a fully extended side kick, and hold it there, still, balanced, and awe-inducing.

Haircut-needing author locks out a side kick

I learned all he knew, just as he knew it. He and I found an opportunity to train with a reputable Black Belt Si Fu in the next city over. This guy was not about cool-looking, awe-inducing anything! He was about getting it on and mixing it up. We junked up on the first day and pounded the shit out of each other. I broke a toe, was pretty sure I did; fought anyway.

On the drive home my brother confessed that he didn’t have the heart for the fight, so he continued with the dance, and I continued with the Si Fu, training in full contact kickboxing, to eventually fight in the first ever full contact kick boxing match in the history of Arizona. This was a MARS rated event that would officially match fighters and allow them to progress up matrix to eventually fight for sanctioned city, state, and national championships.

I managed a pallid five wins, no losses record in AZ, winning one championship in the Black Best division of a tournament in New Mexico.

When I broke the news to my Si Fu that was going into the military, he surprised me with distressing reaction: he promptly offered me the next belt rank up the chain, which backfired on him intensely. So he is bribing me with a belt I didn’t earn?? That gesture, even back then, did not reside on the periphery of my standards.

My first two years in the Army Infantry were a high 90% waste of my time and effort. The regular peace-time army was nothing short of an insular penal colony inbound for the Island of Miss-Fit Toys. I was offered Airborne School as a route out of the Infantry, but suffer a clinical dread of heights. Before long I accepted the school, insisting that I would even jump without a parachute, if it meant getting me out of where I was.

Now, as with many of the skills I fostered in myself as a young boy, I was no longer shy to admit what I brought to the table. Special Forces respected it all. I was somebody, suddenly… I had a little bamboo umbrella in my Pina Colada. I was in the phonebook now, under ’S’ for ‘somebody’!

Hand Martial Art for me migrated away from the traditional wiz-bang ‘hide-the-tiger-missing dragon’ pomp. No jumping over houses backwards, no engaging multiple adversaries while juggling a large clay pot with the hands and feet… no gi sleeves cracking like bullwhips at the end of an air-punch. All of it was replaced by no-nonsense boxing and three staple kicks: front, side, roundhouse.

In my Green Beret qualification course the hand combat training program… well there wasn’t one. All we did was get paired up, junked up with gloves and head protection, and throw down in a sawdust pit. I think it was more for the entertainment of the cadre. I remember distinctly resolving not to be an ass and dump on my opponent. After all, I was coming from fighting in a kickboxing circuit, and should show restraint.

My opponent had an attitude that was a grand departure from my own, as he clearly proceeded to try to separate my Axis and Atlas Cervical Spine vertebrae, detaching my head from dominion over lower corporeal motor function. Having other plans for myself, I couldn’t accept that. I cheated the screaming fans of their round of bloody thrills with a short right hook to the plexus, solar, one each. It was like two cars colliding on the freeway, revealing instantly that I wasn’t missing out on anything skipping breakfast that morning.

Now in Delta, we were presented with an actual martial art program that was a structured and comprehensive body of instruction that was technical in nature, but was ineffective as a combat fighting impetus. That was ok, because when men get assigned to squadrons, all the brothers break out with their own experiences and training, having grown up fighting, as all good red-blooded American boys do.

Funny… kickboxing was a thing that my mother at least allowed me to pursue, though she did by and large thumb her nose at my potential. I recall the first organized martial art tournament that my instructor forced me to go to. I came home late that night, where my mother was sitting up watching TV. I walked by her with my trophy tucked under my arm like a textbook.

“Its a paperweight, mom.”

“Yes I won, mother… remember when you didn’t let me take Chinese in high school?”

I have an age-old philosophy (well, not THAT old…) that if people are not going to help you, then you have to be ready to help yourself. A variant of that is, if people are not going to entertain you, then you should be ready to entertain yourself. Then there is this other adage that I readily dispel: “There are just some things you can’t learn without a teacher.” I have proven that beyond tangible dispute. That sort of statement serves only to retard the personal desires and ambitions of us brothers and sisters; it bids us to quit before we even try.

Author’s attempt to entertain self with obscure humor

As for me even bothering to ask my mother if I may take Chinese in school, I quote a magnificent American hero, Ranger Regimental Command Sergeant Major Greg “Iron Head” Birch: “The greatest failure, is the failure to ask permission to try.” He made that sarcastic remark in disdain, when our Squadron climbed North America’s highest peak, Denali, but were ultimately denied permission to summit, by a timid officer in charge.

Operators sit short of summiting Denali, having a cold one prior to heading down; Moose [smart like crowbar; strong like tractor] gazes up in awe at the Denali peak, that he would never reach.
Combat physical training. I noted that in Delta there was a bifurcation of schools of thought among the men, whose physical training program was NOT dictated at any level of command, recognizing that the Unit was fueled by big boys, who played by big boy rules. The two schools I recognized as: those muscle heads who believed in cool-looking muscles and strength as their primary focus, and those who could run like Winged Mercury, otherwise lacking in a spirited upper body strength.

Sure the two schools poked and prodded and vied to prove their superior mentality for combat training. One of my favorite exchanges came from my good bud, the one-man wrecking machine Barten W, who shut down one of our jackrabbit runners with: “I’m not saying we don’t need guys like you; we need you to run ahead of the assault force and announce (panting heavily): “Hey fuckers, there are some really big dudes on their way here to kick your asses!”

My staunch belief, was: if I die in combat, or if anyone else in my team dies in combat because of me, it will be because I could not move enough weight fast enough to rescue my brothers or myself. That fear I truly did have, and it vexed me my entire ten years ‘behind the fence.’ That concern did truly steer my personal training regimen.

Enter all the personalities and opinions that reside between the meatheads, and the gazelles. Brothers, each in his own definition of where he honestly needed to be to fulfill his vision of the ideal warrior; combinations of strength, endurance, speed, and flexibility. The four pillars are rallied by a key mental/spiritual bond: temerity and determination!

Master Sergeant George E. Hand IV said: “The Delta Force we will always have with us, as no amount of modern whizz-bang technology, will ever replace raw audacity.

Sum it all up, and you may recognize this word as the all encompassing adjective: DETERMINATION.

His Excellency George Edward V, at three years old pushes his tricycle non-stop up a gradual slope for over a mile.

As featured in the photo at the top of this essay, is in my mind one of the most well-rounded warriors to grace la Terre, Patrick McNamara, a great American and very good friend of mine for over 30 years now.

It is my stanch opinion that ‘Mac’ has achieved the most favorable and deadly blend of the four pillars of combat physical training as I have come to recognize them: strength, endurance, speed, flexibility.

I’m a writer, Mac is a trainer, training in a myriad of subjects is a passion of his, yet one passion in a sea of renaissance man passions. Mac is a leader in the field of firearms training, skilled in many forms of hand combat, and at over 50 years of age, maintains one of the most highly honed combat chassis on the planet.

Search out his many many YouTube video clips on physical and firearms training. Check out his latest of many publications on his subjects at:

or, view the YouTube video featuring his latest book at: