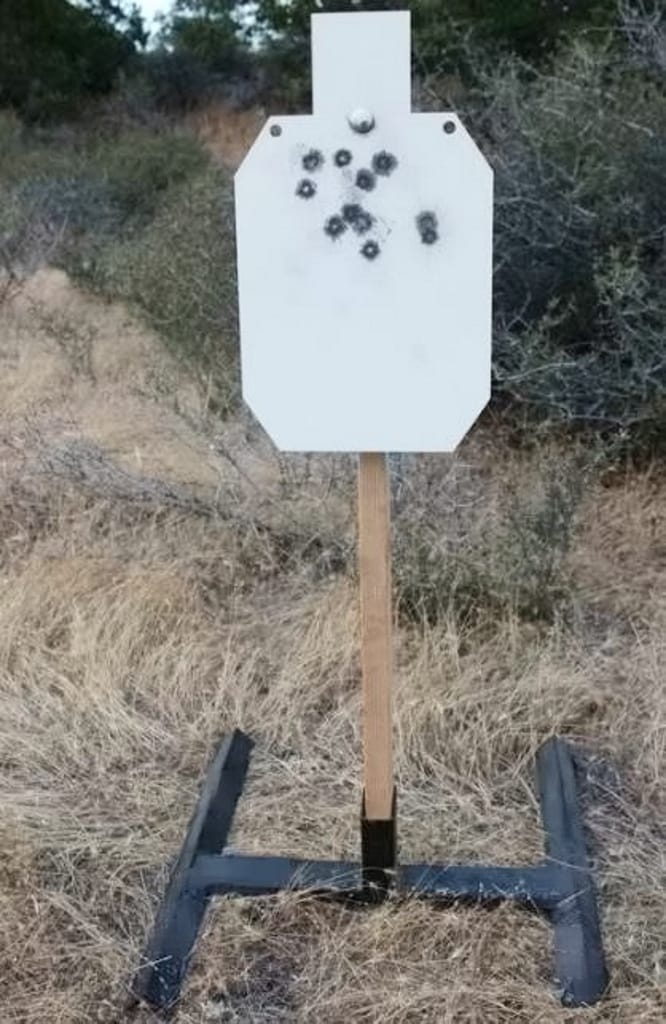 Steel targets have been around for quite some time, but for a long period of time they were often only found at nice ranges and made by small custom target makers. Now as shooting sports exploded and more and more people began concealed carrying steel targets have become mainstream. From 3-Gun and public ranges to the always impressive private range like mine. I love shooting steel and wanted to talk about why I like steel, as well as a few things you should know about steel targets.

As you can tell from the title, there are some issues with steel targets, but safety isn’t a valid one. If you are not capable of using steel targets safely, you are not capable of handling a firearm safely. Mount them per the instructions whether it be dangling them from chains, angling them into the ground, or any other variety of safe use targets. Don’t shoot targets not rated for your particular weapon. Handgun targets aren’t designed for rifle rounds. Shoot from an appropriate distance, and don’t use zinc rounds. It’s just common sense stuff. Don’t try to be a wise ass and consider your 5.56 AR15 Pistol an actual pistol.

Steel targets are the most fun targets to shoot that doesn’t explode. The ding of lead on steel delivers instant feedback to the end user. When shooting rifles at a distance that ding lets you know you hit the target without having to move down range. It’s a degree of satisfaction that paper can’t deliver.

Regarding training benefits, the instant feedback you receive is very similar to an actual gunfight. It’s pretty apparent when you shoot someone that they’ve been shot. Not always, but most of the time anyway. The instant feedback also saves you time from having to go and check your target for holes. You know instantly if you are failing or not and you learn to work through aiming and shooting problems with a gun in your hand.

There is no waiting for a ceasefire to learn you’ve grouped 30+ shots way to the right of your target or left, or even worse, missed completely. For beginners I’ve seen so many fire a shot, stop, drop their weapon and look for a hole. This habit creates training scars that may translate over to a defensive situation. With steel, they stay on target because they immediately know if they hit the mark. They keep their guns up and keep firing without the constant reminder to keep their weapon on target.

Steel Targets also last forever. After an initial investment, the cost is zero. Steel targets last nearly forever, and the Shoot Steel Popper I own has seen thousands of rounds over the years. I easily spend ten bucks a day in targets when I go out shooting, the cost for the popper? About 85 bucks. Some smaller poppers go for as little as 30 dollars.

That’s not a small target. Some steel targets are, and I own a few small steel gongs, and they are great. The problem with small gongs is if you miss it’s impossible to know how far off you were, were you to right or left? Above or below it? You do need the means to track your misses to a degree and to make adjustments and diagnose your flaws until you are hitting your mark.

You may think precision practice on paper doesn’t apply when it comes to defensive shooting, but you’re wrong. It’s true you aren’t trying to make tiny little groups in an opponent, but all we ever preach is shot placement. If you aren’t precise how well is your shot placement going to be? Also, the good habits that you learn shooting for small groups and exercising precision shooting will translate over to your defensive shooting skill. Your muscle memory for a good grip, proper sight alignment, and proper trigger pull is what you’ll fall back to.

I’m also a big proponent of anatomy targets that also help build successful habits when it comes to finding those important organs to eliminate.

Of course, steel targets also don’t allow for extremely close range training. The risk of a ricochet makes this too risky.

The truth about steel targets is simple, they are great, but should never be the only target you are shooting. The addictive ding does make it fun and enjoyable. They are a great training aid, but will never replace paper or cardboard targets. A decent mix of both will maximize skill gains and building good habits. Speed and precision are both critical aspects of training, and a mix of steel and paper targets will get you where you want to be.