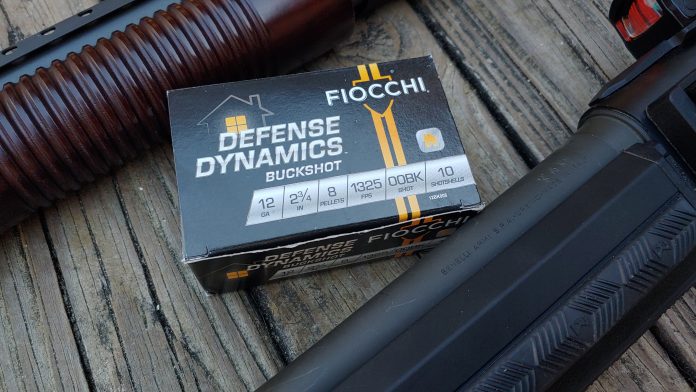 Shotguns, especially the home defense variety, were a hot commodity in 2020 and now 2021. My own FFL sold a lot of firearms online and had a healthy stock of ARs, AKs, and the usual suspects, but Glock pistols and tactical shotguns flew off the shelf, and with them, most shotgun ammo. Tactical buckshot has been tough to find, with Flitecontrol loads going for more than a buck a round. What’s a poor boy to do? Well, Fiocchi Defense Dynamics offers a budget-friendly defensive load, but does it hold up? 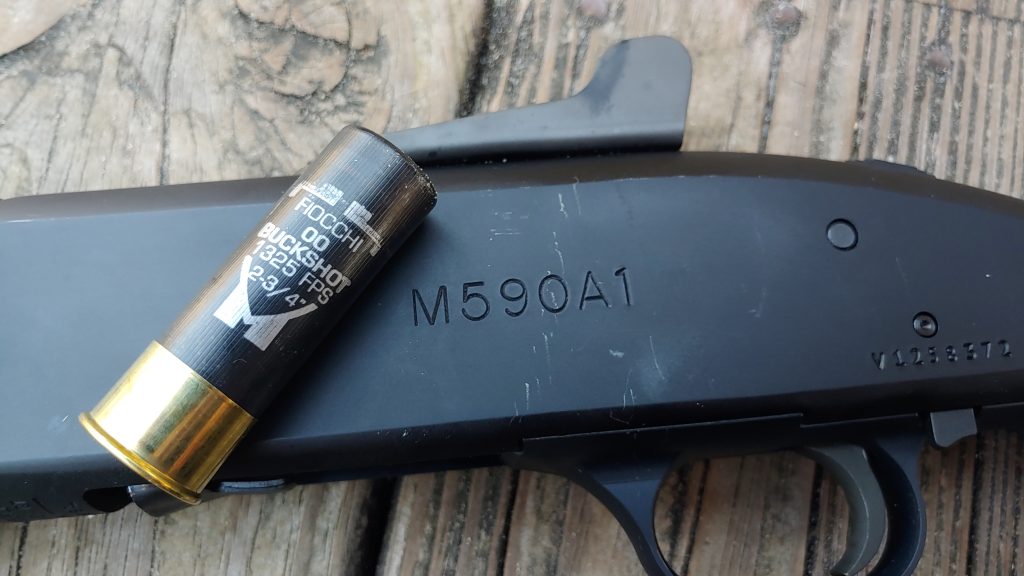 Fiocchi ammo has long been considered adequate budget ammunition, but you’ll rarely see purpose-built defensive loadings. However, this new Defense Dynamics line promises to provide defensive shotgun ammunition at a great price. Even in these trying ammo times, I purchased 100 rounds of this ammunition for about 60 cents a round from Guns.Com.

What Makes it A Good Defensive Load?

Besides the name Defense Dynamics, what exactly makes this a proper defensive round? Well, what caught my eye was the eight pellet load. Most 2.75 inch 00 buckshot rounds shove nine pellets into a shell. The problem with nine pellets is the way they stack inside the shell. It’s an odd configuration that often causes a flyer. A flyer is a pellet that strays from the rest of the pattern.

This pellet is unpredictable and can easily wound or worse an innocent person should it overshoot the threat. An eight pellet load sacrifices a single pellet for maximum consistency. IT’s rare to see budget ammo makers care enough to knock the single pellet out of the load. 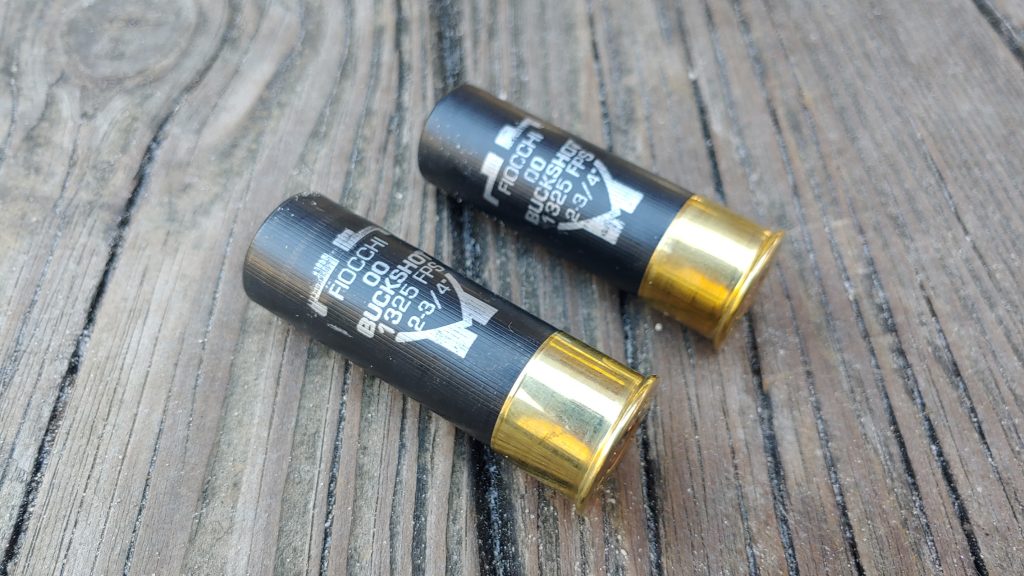 That’s not all. The shell has a high brass base which helps with reliable ejection and extraction. Most guns work fine with low brass, but a little extra height ensures a hair more reliability, especially with semi-autos.

Lastly, the moderate 1,325 feet per second velocity is a nice touch. It’s not necessarily low recoil, but it’s moderate and completely controllable. Higher velocity loads also tend to create a looser spread. Combine the velocity with the high brass, and the Defense Dynamics shells should function in the pickiest of semi-autos.

I brought my hundred rounds out with my Benelli M4 and Mossberg 590A1 and set up a simple 8.5 x 11-inch piece of blank paper to pattern the load. I patterned at 15 yards. This should encompass about 99% of long shots in houses in the United States. 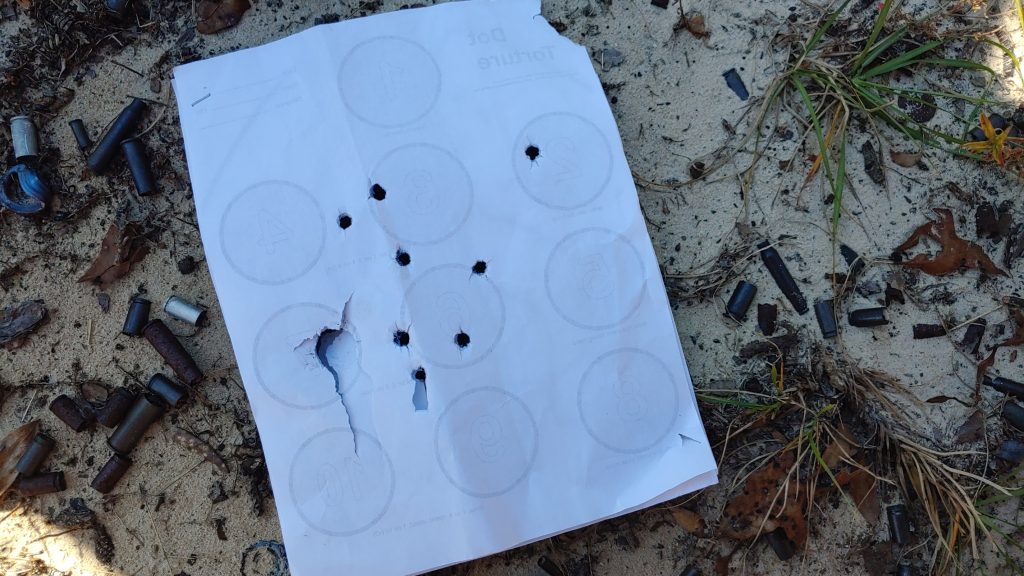 At that range, the Defense Dynamics shotgun loads delivered a consistent and somewhat impressive pattern. It’s not FliteControl good, but it beats the pants off of Mil-Spec buckshot. It stayed well within the paper, which would represent a rather narrow portion of the human body. I did this patterning with both guns, five rounds each, and they were both consistent. The 590A1 held a slightly tighter pattern, but that’s to be expected.

Recoil wise the loads are a real pussy cat. Maybe it’s because they only have to propel eight pellets at 1,325 FPS. Even in the 590A1, the loads were completely controllable. I used some standard Monarch 9 pellet buckshot that’s a 1,345 FPS load, and the recoil was significantly worse. 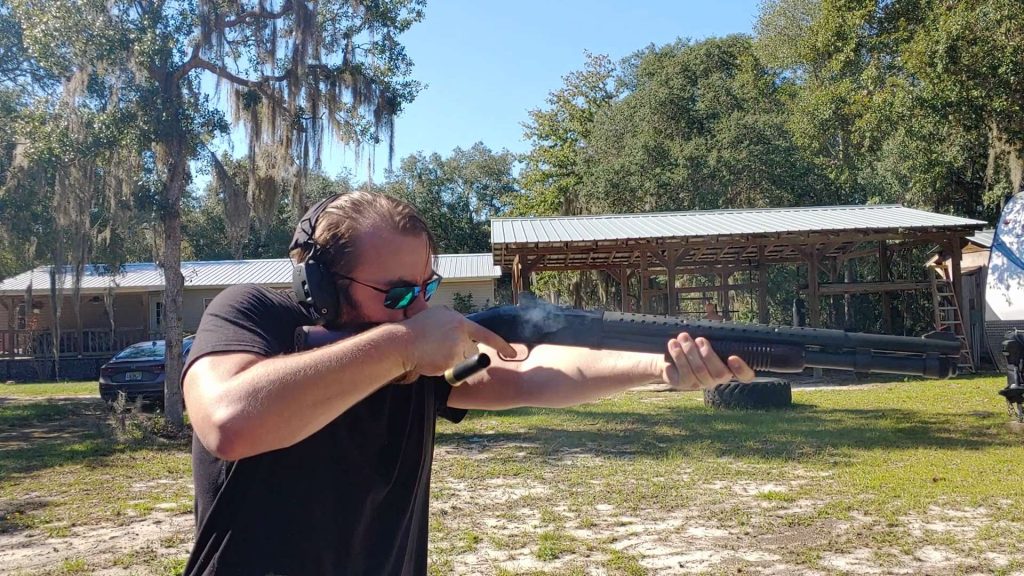 With the Defense Dynamics loads, I was able to accomplish two shots on two small targets in under 1.5 seconds.

Not a single round failed to eject and extract from either gun. Obviously, the M4 isn’t a picky semi-auto, but it still chugged through each shell with ease. The shells ejected consistently in one direction and formed an easy to clean up pile. Each round also felt predictable, showing that the loads don’t vary widely in power. 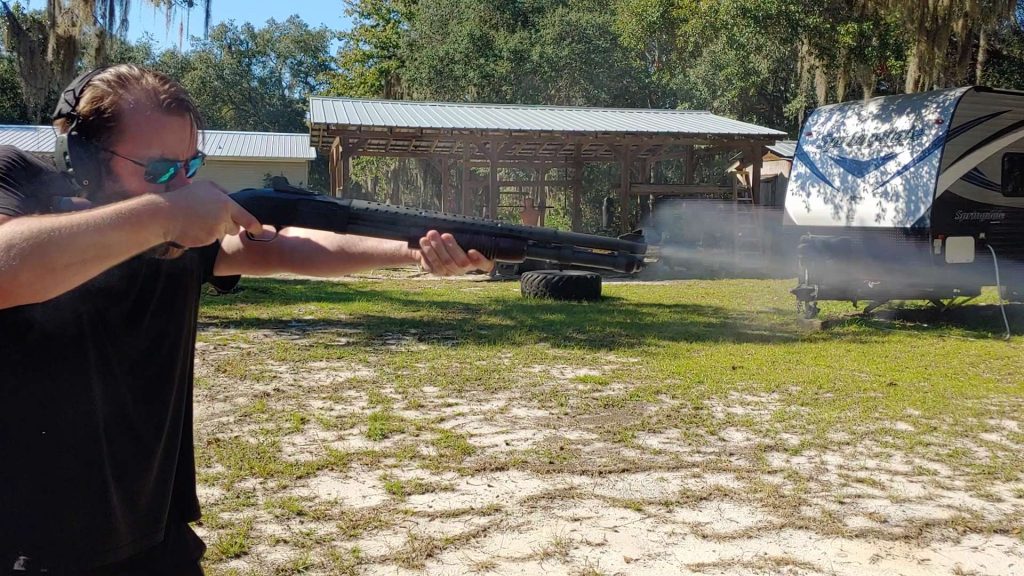 Sometimes a box of cheap shotgun shells will have some underpowered shells, some slightly amped shells, etc. The Defense Dynamics remained consistent.

I think the Defense Dynamic loads from Fiocchi are a fine option for a defensive shotgun. These would be great for a picky semi-auto especially. Fiocchi used to have a great low recoil load, and I wouldn’t mind seeing them lower the velocity to about 1250 FPS and keep the eight pellet load at this price. Either way, I hope this is a good start to a great future.