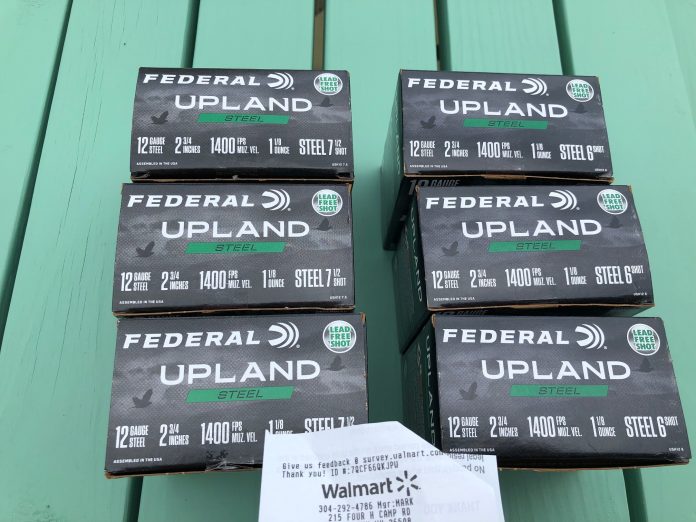 I know it doesn’t seem like the two items in the title have anything to do with each other, but let me tell you that they do.

So what DO shotgun shells and canning lids have in common? Both of the above have been in short supply for over a year, yet both were found by me in a single day the other weekend! I don’t know which gods were smiling upon me, but I hesitate to ask what it is they will require of me in return. The Universe can be fickle that way.

Admittedly, there were only six boxes of shells on the shelf at Wally World, and admittedly they were steel shot. But — the price! They were $6.47 a box! I bought all of them without a moment’s hesitation. Even though they are supposed to be “upland” loads, at that price I can throw them away on clays and not feel like I’m blowing a small fortune.

Maybe I’m being stubborn and unrealistic but I just refuse to pay 10 bucks a box (or more) for target shells. I’d rather just carefully curate the several hundred rounds I have and “spend” them judiciously.

Let me tell you that the prepper/stockpile bug has certainly bitten in the shotgun department. Never again am I going to allow 300-400 shells to be “enough”. But now I have to wait for prices to get more reasonable again before I stock back up.

Now to the canning lids. Ever since the start of the pandemic, canning supplies in general have become a high demand item. They do appear here and there and are slowly showing back up on the shelves, but there for awhile the shortage was almost as bad as ammo.

Canning jars and rings/bands (the outer screw caps) are almost infinitely reusable. There are people who are still using their grandmother’s jars.

But the issue is – it’s the flat lids (the flat part with the sealing compound on it) that are not reusable. At least it’s not recommended to reuse them because you can get seal failures and then your food (and hard work) is ruined.

“Flats” have been as rare as hen’s teeth for more than a year. Now and then I’d get lucky and find a few packs on a shelf somewhere, but that’s it. So I scoured the shelves regularly. I’ve had the most consistent luck at Kroger and Target.

For the uninitiated, a box/pack of flat canning lids has a dozen in a box and runs in the two to three dollar range at normal prices. (Compared to a box of shotgun shells at 6 bucks for 25) So one canning lid costs roughly as much as a shotgun shell – at “normal” prices at least.

Kind of like trying to reload shells without primers, you can’t can without flat lids, even if you have jars and rings by the hundreds. So, I’ve been slowly picking up a few here and few there as I found them.

But this weekend, I hit the mother lode. Kroger had wide-mouth lids (but still no regular lids). I bought eight packs and left some for other people, trying to be polite. But the next day when I went back they still had some, so I bought a few more packs.

Between this jackpot and what I have slowly accumulated over the winter I should be set for canning supplies now for two years. The pandemic has taught me that I need a backlog of supplies, not just enough to get by. The prepping mentality has taken hold here as well.

Granted I did double the size of my garden this year and will be doing more canning than last year so I need more lids. But I still dehydrate a good bit of my produce too. I re-use commercial jars for my dehydrated goods so I don’t need canning jars for that.

Both shotgun shells and canning lids should be part of one’s Emergency/Disaster/ SHTF scenarios. One of them can help you get some food, and the other can help you preserve it. So it is wise to stock up on both – eventually.