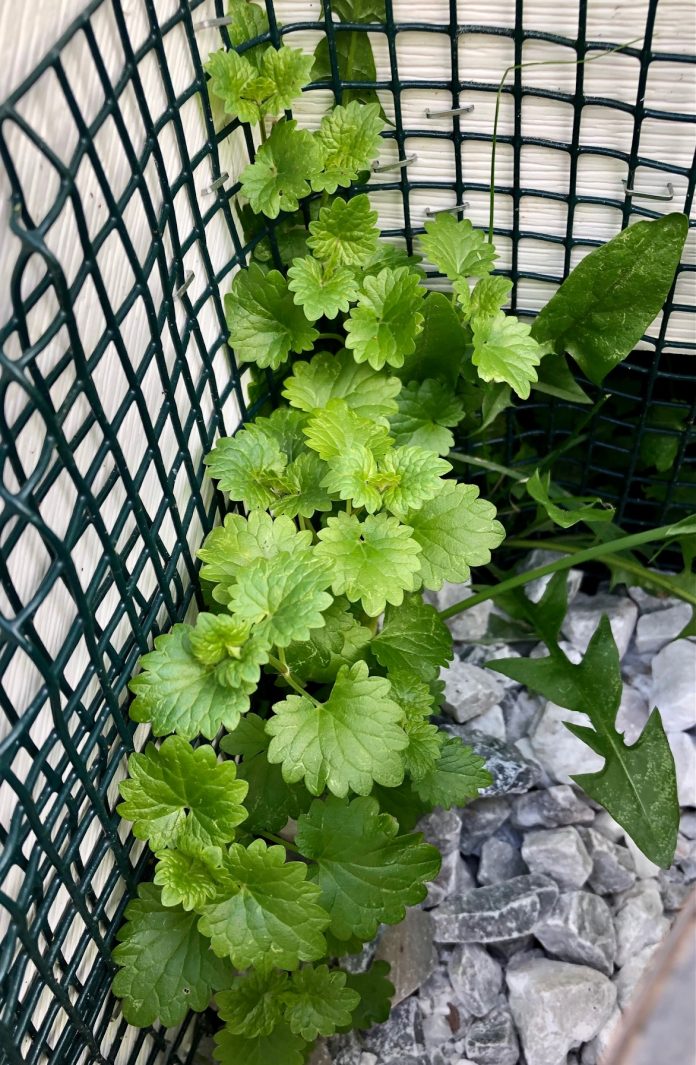 I’ve previously shared some backyard edible weeds that one can forage in hard times. But I recently discovered that yet another aromatic weed I’ve been yanking out of my yard beds with alacrity is actually not only edible but was historically used in beer-making.

Now that I have your attention…

I’m not a home brewer myself, but I do like good beer and I’m not a huge fan of heavy hops and IPAs. So this new knowledge interested me from an historical and homegrown perspective.

Whether you call it Alehoof, Creeping Charlie, Ground Ivy, Gill-on-the-Ground, or use its proper name Glechoma hederacea, this member of the mint family has been around for thousands of years and was brought to America by European settlers intent on continuing their old world traditions in their new lands.

Like all members of the mint family, Alehoof has a square stem. It has kidney to fan- shaped leaves with scalloped edges, and little tubular purple flowers in the spring. Also like the mint family it spreads like crazy and can be difficult to eradicate if it gets started where you don’t want it. It is a perennial which comes back year after year. So don’t count on a cold winter to get rid of it.

This spreading “nuisance” (depending on your point of view) is one of those herbs that ancient adherents claimed would cure everything from bronchitis to tinnitus — if you believe them. I don’t personally buy into the panacea magic, but the plant IS reportedly edible. (As always though, eat stuff at your own risk). You can’t hate something that could possibly keep you alive during the starving times and stave off scurvy – even if it is a pain in your garden beds.

What I found really interesting is that a couple of this weed’s folk names stem from its use in brewing beer.

Apparently back in the Saxon days of England (410-1066 CE) it was common for aromatic herbs to be used in beer-making, hops having not yet arrived on the scene. Such herb beers are/were apparently called gruits.

Gruit was also the word for the herbs used in the making of gruits. They were profitable plants (unlike today’s nuisance weed) and they were apparently taxed heavily in certain areas of old Europe.

As time went on hops arrived as a flavoring and preservative. Using hops for brewing was cheaper than using gruit herbs (partly because it wasn’t taxed as heavily) but it also apparently helped in preservation and shelf life.

There was apparently some mix of religion and politics in there too as a lot of this change was happening around the time of the Protestant Reformation. I’ve read various things alleging that herbal ales were “too” intoxicating, which irritated the new Protestant reformers. Or that the Catholic Church held a monopoly on gruit herbs, which led some to go with hops out of protest. It’s all interesting, but you know how history goes – It all depends on who tells it.

Eventually, government got even more involved and brewing regulations such as the German Reinheitsgebot of 1516 were instituted. This specified that beer was ONLY to be made with water, barley, and hops. (Gruits being noticeably absent)

As a result, over the centuries the world gradually forgot about gruits and the lowly alehoof. But the recent resurgence of microbrewing is causing renewed interest in these ancient herbal brews and their esoteric ingredients.

If you think you might want to brew your own beer in the post-apocalyptic world, you might want to consider not pulling up all those yard weeds – especially the alehoof. You may even consider setting aside part of your herb garden to grow it on purpose. Or grow it in a hanging basket or large container to curb it instead.

Armed with such historical weedy herbs, when the Great Collapse happens if you brew gruit, and I ferment elderberry wine, then maybe we could set up a roadside tavern for coin. Sound like a plan?