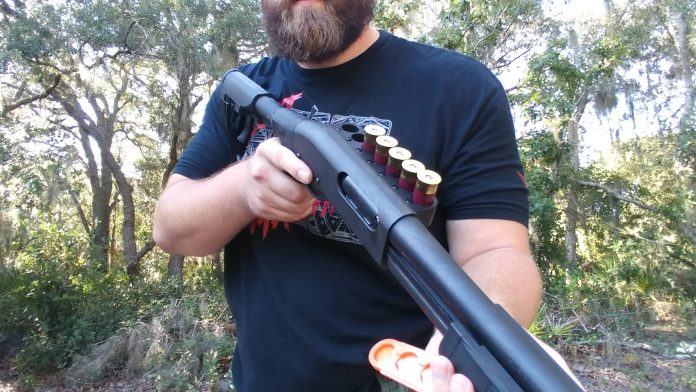 One of the biggest weaknesses about the shotgun is its limited ammo capacity. This is why shotgun reloading is so critical in tactical shotgun classes.

The fastest way to reload most shotguns is from the side saddle. The side saddle is easy to reach, intuitive to load into the magazine tube or directly into the chamber, and conveniently placed on the weapon.

Side saddles hold anywhere from 4 to 6 rounds, so they can be emptied pretty quickly. I’ve begun to think about not only keeping the shotgun loaded but how do I keep the side saddle loaded. This leads me to Tuff Strips.

Tuff Strips and the Shotgun Reload

Tuff Strips from Tuff Products are speed strips. Speed strips for you non-revolver guys are rubberized strips that hold rounds in a straight line and can be used to rapidly reload a revolver. Tuff Strips makes them for almost every typical revolver caliber, but they also produce them for shotguns. That is where we land, with the Tuff Strips 12 gauge speed strips. 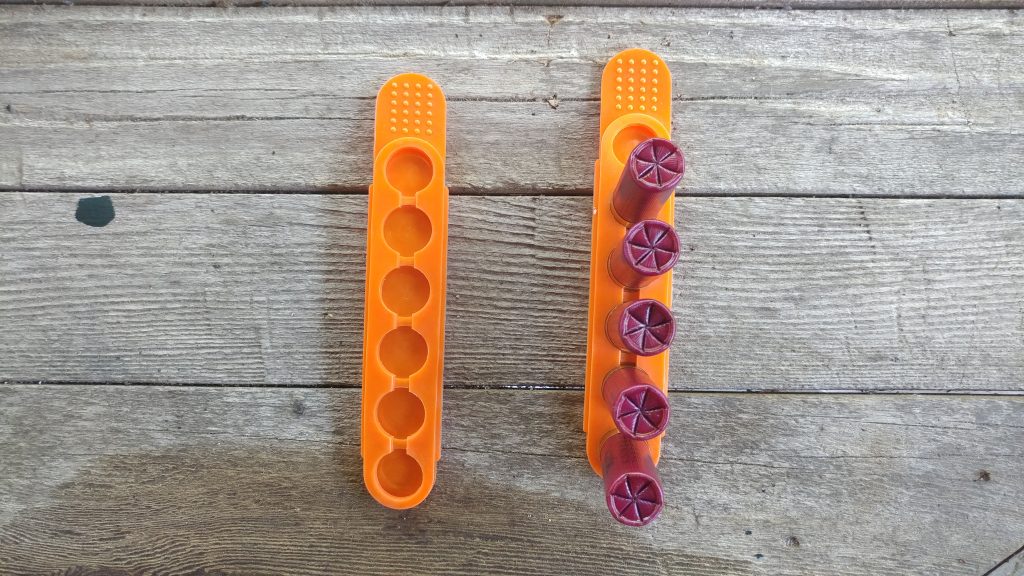 Tuff Products designed these strips to easily and intuitively load double and single barrel shotguns. They are great for trap and skeet shooting, but I saw a little more potential than that.

The shotgun has a low capacity, so reloading is a key skill to have.

Reloading is fastest from the side saddle.

What happens if the side saddle runs empty?

We reload the saddle. Loading from something like the Ammo Pal is one way, but so is a bandoleer, but they’re slow. Shotgun ammo is bulky and holding more than a round or two is difficult. This is where I saw the potential for the Tuff strips. 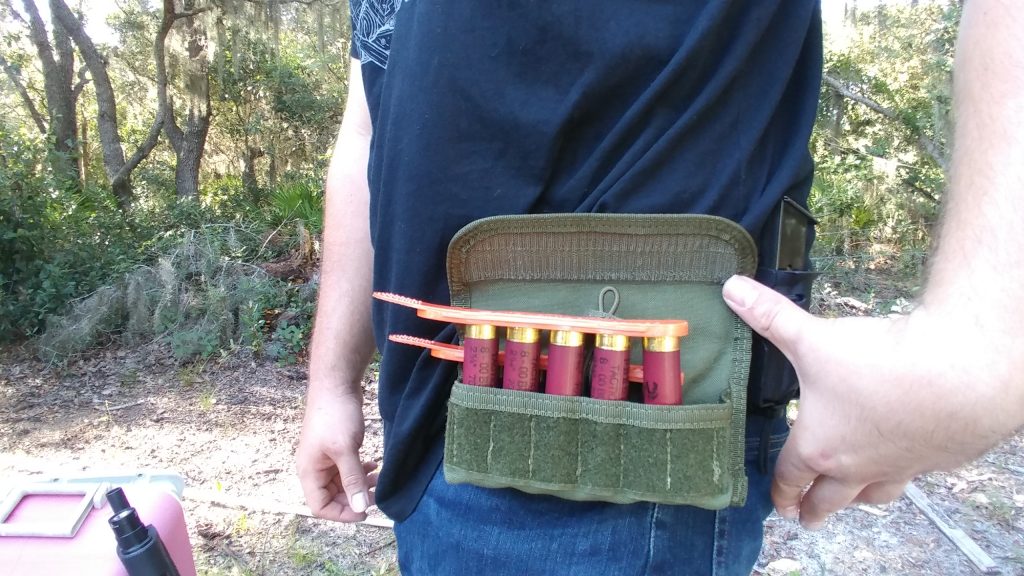 They could hold the rounds in an organized fashion and hold enough rounds they could easily reload a side saddle. The Tuff Strips are each capable of holding 6 rounds, which would fill most side saddles. I do recommend downloading them, and we’ll touch on why shortly. 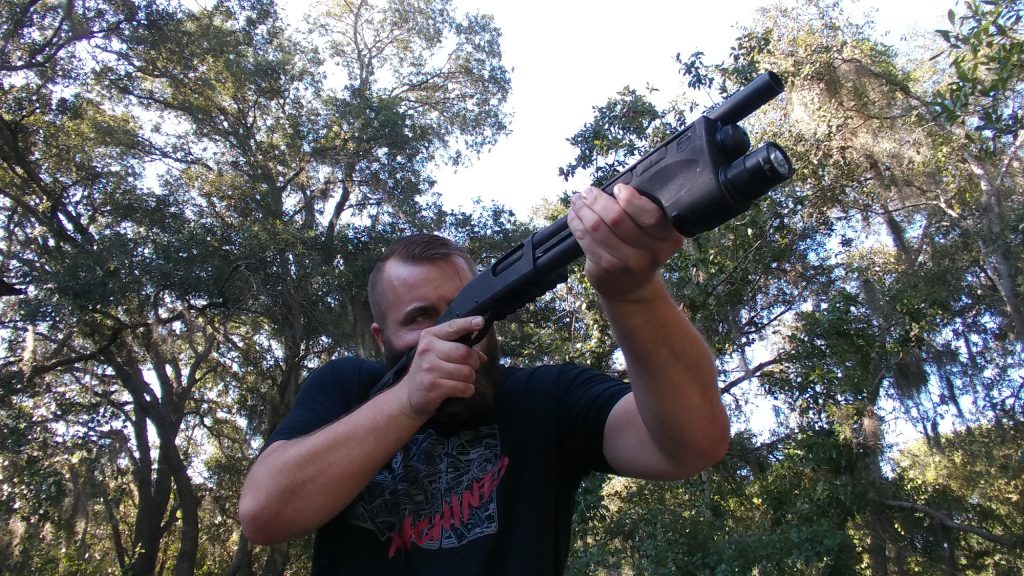 These Tuff Strips will still allow shotgun ammo to fit in a bandoleer or traditional ammo pouch. 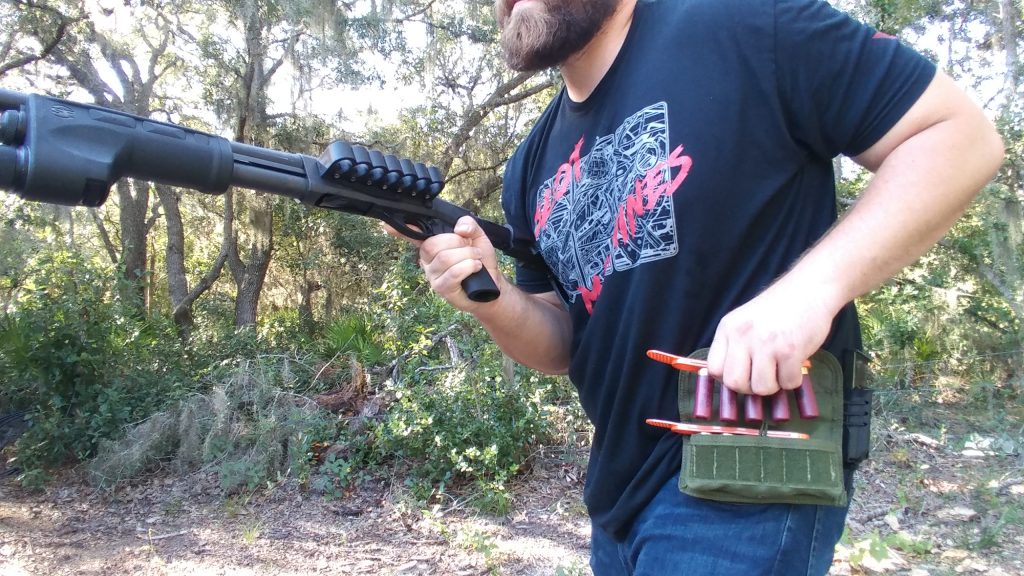 The idea is easy. Once you grab them you have up to 6 rounds in one hand, without it being extremely bulky. You then align and push them into the side saddle. then pull to the side or forward to peel the Tuff Strip from the ammo.

I took out my Tac 14 equipped with DSF weapon light and Gear Head Works brace. It’s also rocking a 6 round side saddle. I loaded the Tuff Strips with buckshot and hit the ground running. At the first try, I realized 6 rounds was a bit much. 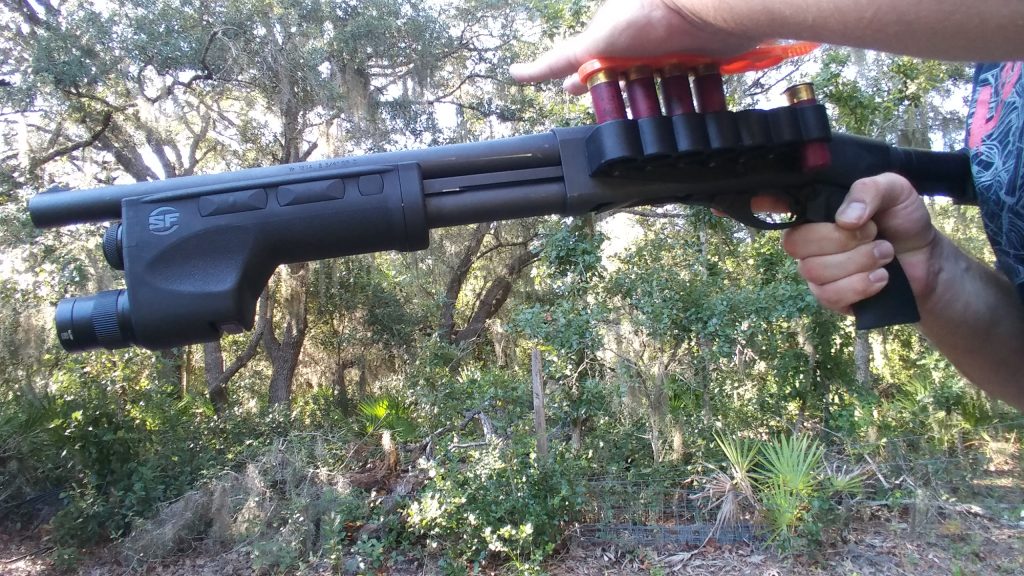 With that many rounds, it became cumbersome to make sure they were all aligned and it was difficult to load the 6 rounds into the side saddle. 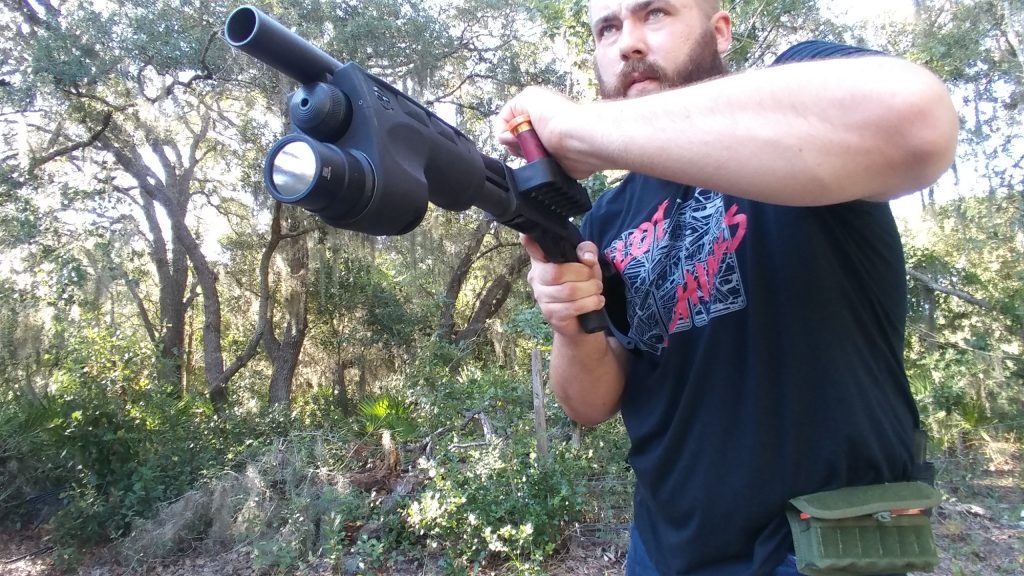 Downloading to 5 rounds gave me a better grip and was easier overall to reload the side saddle.

Downloading down to even 4 rounds was even faster. With practice, I did close the gap between 4 and 5 rounds. 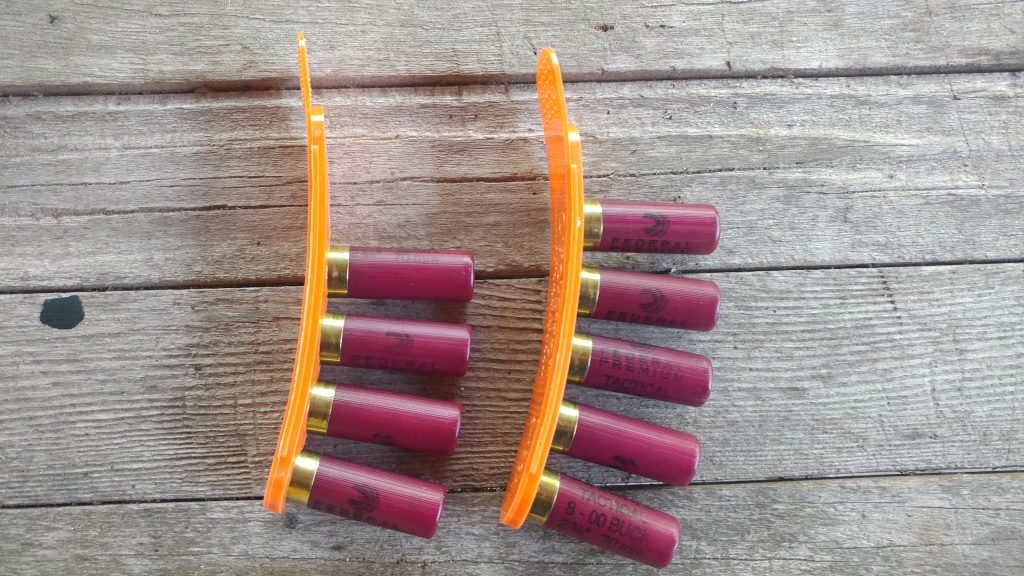 In a short period of time, I became pretty damn fast at reloading the side saddle.

The Tuff Strips made is easy and rapid to do so. Let’s say I haven’t run the side saddle dry but want to top off. 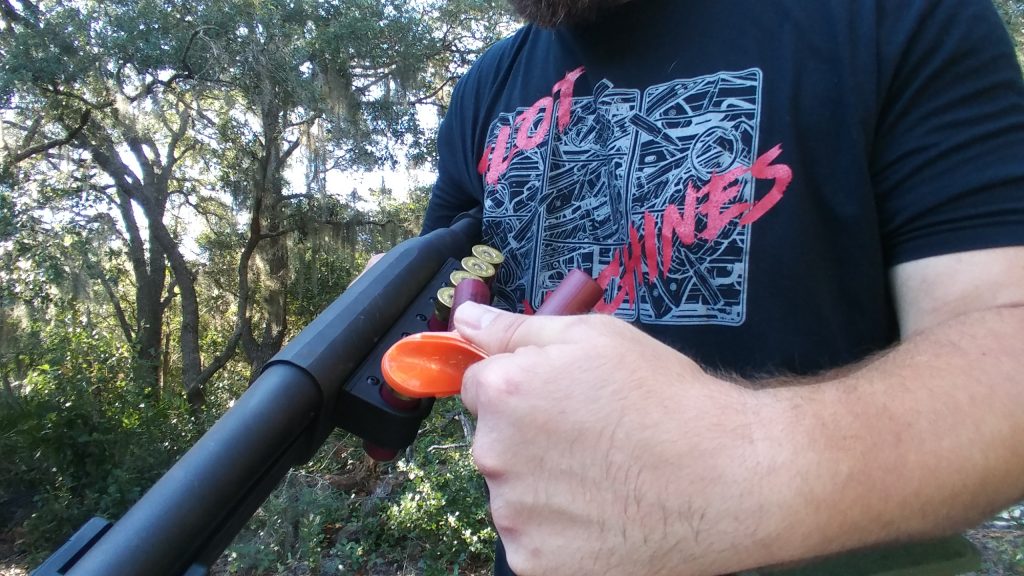 That’s easy to. Just line the shells up one at a time and load them as necessary. 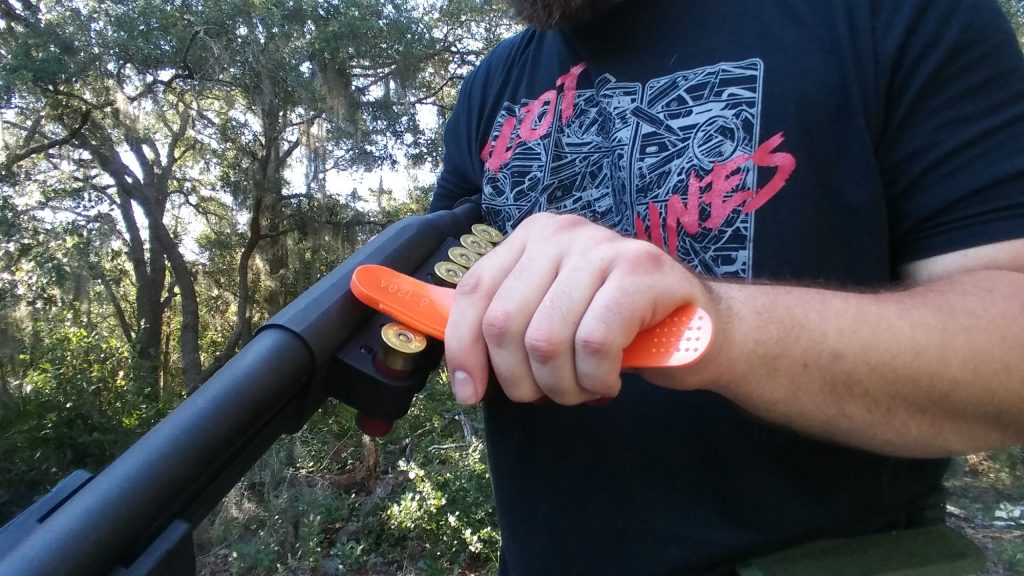 It’s important to note this isn’t something you’d do in the middle of a gunfight. 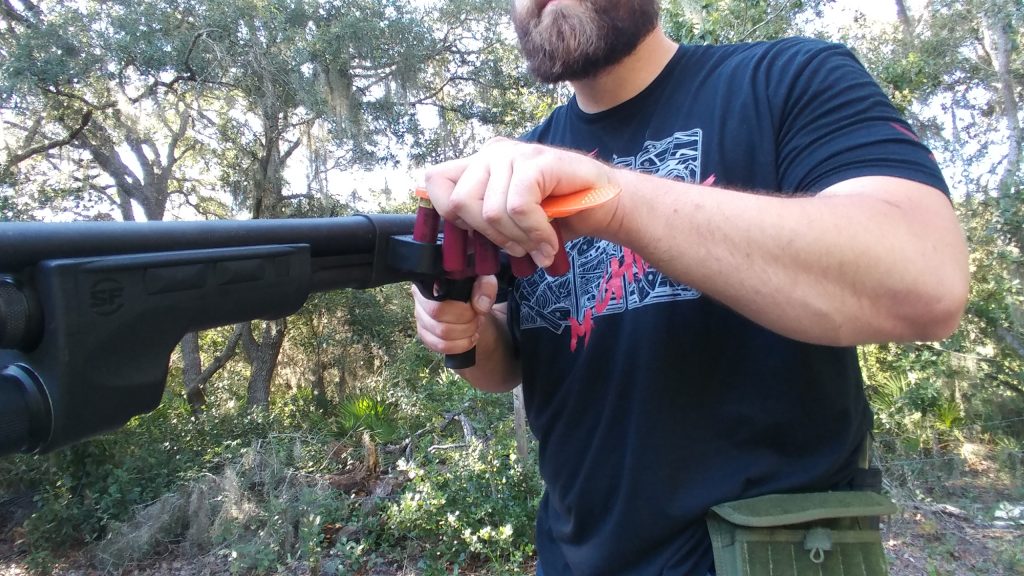 The side saddle is the middleman and you aren’t going through the middleman in a gunfight. This is what you do during lulls, from behind cover, or when someone is suppressing for you. It’s the ‘Tactical Reload’ rather than the ‘Emergency Reload’. 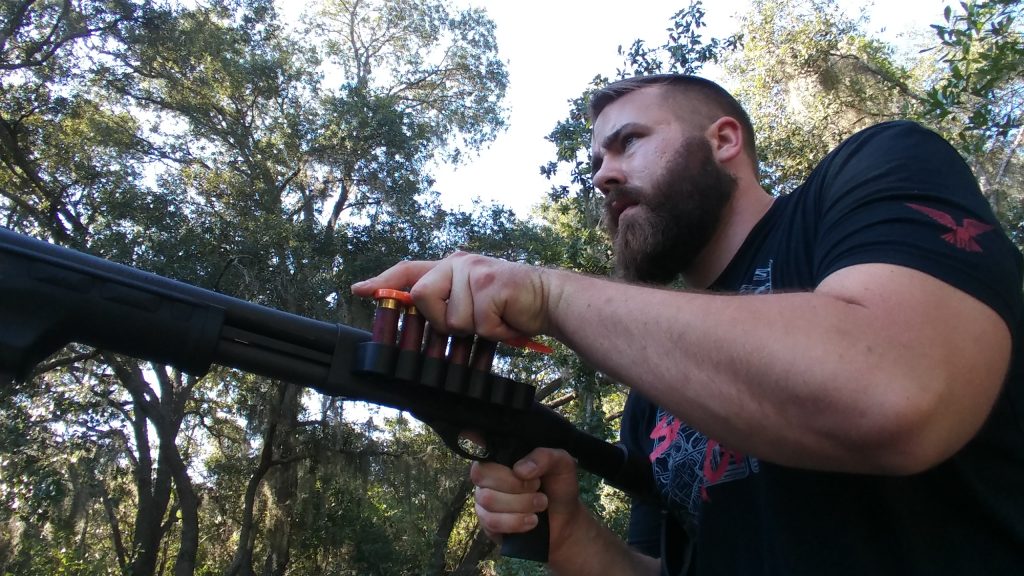 If you’re a shotgunner I recommend checking out Tuff Strips. They run about 7 bucks apiece on amazing and are an excellent addition to a shotgun loadout. Keeping the shotgun loaded and running is always a challenge, but Tuff Strips do offer substantial assistance in the art of shotgunning.