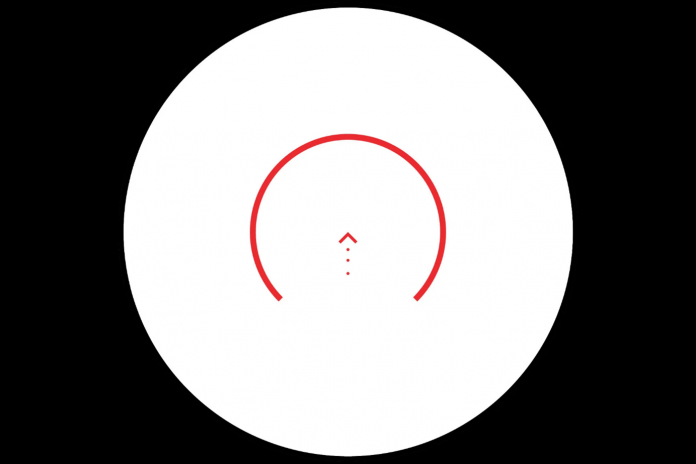 In this piece, we’re going to walk through the benefits of why the ACSS Reticles make sense in red dot sights.

One of those innovations is in reticles: what used to be a choice between red, green, and the addition of a circle has now expanded into more useful options. Here, we’ll talk about the general purpose of the ACSS style of reticles, and then its applications to both long guns and handguns in the context of practical, defensive, and competition shooting.

The ACSS family of reticles take the common red dot sight and update it for a lot more user-friendly functionality for high-pressure circumstances.

In a typical red dot, there’s a dot in the middle for targeting. ACSS reticles replace this with a chevron, or triangle with the point facing up. In and of itself, this might not make a ton of difference at close range but can be useful for longer range shots.

Additionally, ACSS reticles have a circle that rests just on the outside of the field of view. This might look sort of similar to the circles inside of some Eotech sights, but the purpose here is to not use the circle for targeting as such. Instead, the circle of the ACSS reticle is meant for guiding you to the chevron.

Let me explain a bit.

Ideally, as soon as you bring up the gun to your line of sight, you’ll see the chevron and put it on the target directly. But, under stressful circumstances such as shooting in a competition or self-defense, you might well be fairly far off target and need a way to get back on quickly. This is where the circle comes in. If you’ve ever pulled up a handgun and had to search for the dot in the optic window you will understand.

Under normal circumstances, you won’t see much of the circle at all. If, however, you do see it, it’s a signal to correct your aim. If you can see the bottom of the circle, for example, you need to bring the muzzle down. Similarly, if you see the right side of the circle, bring the muzzle to the left. With a little practice, this aiming system becomes fast and intuitive, making the ACSS Reticle Red Dot Sights great for high-pressure shooting of all kinds.

On a long gun the deceptively simple ACSS CQB reticle can be a powerful tool. The reticle consists of the chevron and circle of the whole ACSS family but has three additional dots.

At close range, the chevron is your point of aim, and impact, for rifle rounds and shotgun slugs. Under 25 meters, the circle also gives you some clue as to the size of a standard buckshot pattern on a shotgun. So far, so good for a close-range optic like the Holosun Paralow HS503G.

Longer ranges are where the ACSS Reticle Red Dot Sights get clever. If you zero the optic properly, the tip of the chevron is your zero for 100 yards and should work just fine under that range for defensive shooting. By the time you get to the bottom ‘wings’ of the chevron, you ought to be on target for 300m. This sweet spot, of 0-300m means that, to put shots on a man-sized target, all you have to do is put the chevron in center mass and press the trigger.

For longer shots, though, the dots below the chevron represent marks for 400, 500, and 600m respectively: thus, with a little bit of training and some luck or a good call with the wind, you ought to be able to engage targets out to respectable ranges with this simple red dot, which makes it a great option for defensive guns.

Handgun shooting is, of course, a fair bit different than shooting a rifle. Generally, folks are shooting handguns at close range, and sometimes in defense of their own life, which is, to say the least, an extremely stressful situation. In these kinds of situations, the more simple ACSS Vulcan reticle is extremely useful, and we’d consider it a good option for any handgun with a compatible slide cutout.

In those close quarters situations, the ACSS Vulcan reticle like you’ll see on the Holosun HS507C-X2 will have just the chevron and circle. The short version here is that the circle guides you into the chevron. Aiming with the Vulcan is quick, easy, and refined to an actual point which is what makes it great for handguns.

For practical pistol shooting under most circumstances, we’d recommend putting the ACSS Reticle red dot sight on a gun that has pre-made cutouts for it. At under about 25m, all you have to do is put the chevron on center mass and press the trigger. You can use the chevron the same way as you can on a rifle or shotgun, the bottom of the chevron can be used to make shots at substantially longer ranges if you’re confident in your pistol shooting abilities.

Overall, we think the optics that come with ACSS reticles offer some compelling propositions. In long guns, the ability to shoot well out to 600 yards on a single unmagnified reticle is great. With that said, it might also make sense to pair these optics with a flip-down magnifier to help you see and engage at long-distance targets. Thus, you’d get the best of both worlds, with short range speed and some long-range precision.

In pistols, we think that the ACSS Vulcan can help get on target quickly, and the chevron’s relatively large size makes it easy to use under stress. We’d also strongly consider one of the “pistol” optics as a secondary, or offset, sight in addition to a magnified scope on an AR10 build or something similar.