We’ve covered the “Why?” of why the the smaller carbines have emerged into a popular space here in 2021, so now let us examine the next question.

How? How did we arrive at our current most popular set ups?

Well, in truth, we’ve been here before.

The vaunted 11.5 inch barrels of the current “SOPMOD Block 3” uppers on SOCOM’s MK18’s came about because, ultimately, we tried something and have found that.. what we had prior could work better with some learned improvements.

We have been using super shorted carbines for special purposes since WWII paratroopers. But in the era of the M16, the Colt Commando and then later the 733 were the shortened rifles of choice for light, svelte, mobile carbines. The M4, while shorter than the M16, was designed to be used as a non-frontline supplement or non-main effort supplement to the M16, around troops carrying the M16. The M4 was for officers, leaders, and support staff or heavy weapons teams, and not seen as the main effort rifle that the M16 was.

By contrast, the Commando, the 733, and later the CQBRs were specialized main effort weapon systems and got that developmental attention.

The original CQBR was essentially a dropped on M4A1 upper with the barrel chopped to the gas block and the gas block bored out to over gas the system for the miniscule dwell time beyond the gas port.

Later, as they learned, H, H2, and H3 buffers would be added as suggested parts of the system to help them run more reliably and with heavier grain Mk262 ammunition. The CQBR was a drop-on-top receiver for the M4A1’s a unit was assigned, but the MK18 designation came about when it became a complete delivered carbine.

The original MK18’s, called MOD 0’s but comprising the Type 1 and Type 2, were still using KAC quad rails and standard front sight gas blocks. The principle difference is that Type 1’s were build by NSWC from the best current parts available and the Type 2’s were factory Colt’s.

The MK18 MOD1 is why Daniel Defense is famous for their MK18, they supplied the distinctive freefloat rail for both the MOD1 MK18 and the MOD II M4A1’s that gave more rail space and omit the front sight post. Enter freefloat popularity spike.

With the advent of the URGI Geissele upper receiver groups, the MK18’s went through a final improvement phase too. They first added a 9.3″ M-LOK rail and then a longer 10.5″ one for the return of the 11.5″ barrels. Experience and analysis had found that adding an inch to the barrel made gassing the guns significantly easier, cut down on wear, and gave increased velocity for better terminal effects while not making the guns too long, especially as suppressors from KAC and Surefire got shorter and lighter while still having the desired effect. In short, we went to short, go back.

Around the world we can see similar developments all in similar time frames.

And of course the title picture shows the X95, which standard 13″ variant was chosen in 2009 for full fielding in the IDF with an OAL of only 22.8″.

Small, highly mobile rifles are not a new phenomenon. The CAR-15 was introduced in 1959 and was in use with the SEALs in 1964 proving the concept’s utility, despite its drawbacks. The turn of the century has seen us refine the concept to a Nth degree and we can tailor around the particular needs of particular requests to produce.

In the civilian world we craft our need around legal definitions, as well as practicalities. We have seen the rise of pinned muzzle devices on 14.7″, 14.5″ and 13.7″ barrels skyrocket as they are ‘Rifles’ under the law but in short and utility rich lengths. We have seen a parallel drift away from barrels under 10.3″ as the inherent drawbacks are becoming more prevalently known, only occasionally broken for a specific size need that outweighs the short barrel drawbacks. Caliber options like 300BLK have increased flexibility as well in these areas as the 300BLK is designed for short barrels.

We got here through refined trial and error and occasional talks with the good idea fairy. 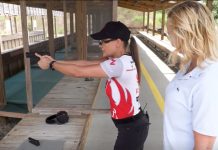