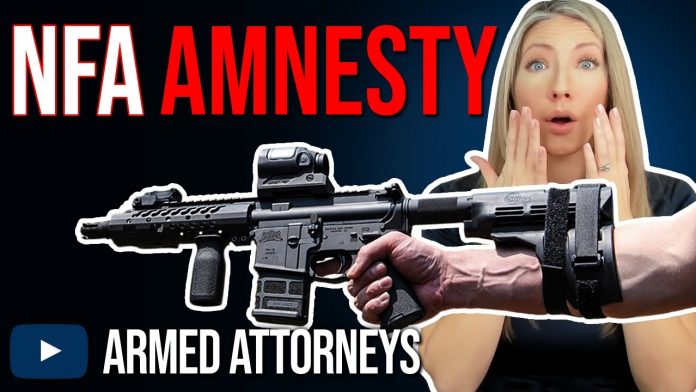 What is the deal with the upcoming and alleged NFA amnesty period? Well, the Armed Attorneys weigh in on the topic in this video

It is just under 12 minutes but if you’re familiar with the legal terms you can skip to the 5 minute mark.

In short, the ATF will be doing something about braced “pistols”. The braced firearm, as we’ve enjoyed them for the last several years, will be going away in December more than likely. You may remember the absurd points system that was proposed to tell whether something was a pistol or not, but most legal pistols that are based on carbines or sub gun type PCCs are going to come out of the smoke as SBRs in the aftermath of the rule change.

That is the point of the rule change.

But the ATF can’t just felonize 15-40 million people. That is considered problematic, so what it appears we are getting is the 2nd NFA amnesty period. There was an original one in the 1980’s where those with unregistered machine guns could get them into the NFA registry, thus the creation of the Pre-86 Transferrable.

This new variant will be if you have a braced pistol and e-file Form 1 it, it will be a free tax stamp. Which, let’s be honest, is one of the two reasons the NFA is most hated.

We’d like to pretend it’s the fact that it is a registry, but it isn’t. Our behavior bores that out.

We’re overall only mildly bothered that the NFA items are on a list, we will say so out loud, but that only low key irritates people. It is annoying in principle, not practice. We would rather that registry not exist, but it doesn’t actively bother us on any given day ending in Y.

What does bother us is the absurd wait times to pick up something we bought and a $200 additional tax to do so for no other reason than because the rule says so. Which is why the braced pistol was so attractive. We could buy that today and it was almost what we wanted without a 9-13 month wait and a $200 tax.

If the NFA cost $5 and turned around in the same timeframe as a normal NICS check we would grumble a little about the registry, but that would ultimately be it. People don’t put much effort into hating on things that don’t inconvenience them. The NFA inconveniences the hell out of people, but the registry itself doesn’t.

So we need to wait for the final rule to drop into draft on Regulations.gov, but if it is what the “leak” portends, we will be able to take any firearm currently wearing a brace and put it into the NFA as an SBR. Which is the thing most of us wanted anyway, an SBR. We just lived with the brace out of it being abundantly more convenient.