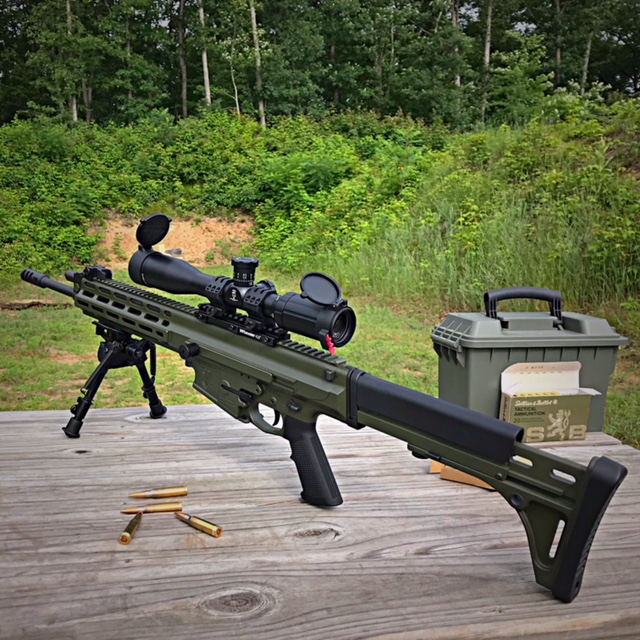 As we mature we tend to make better informed life decisions. We base them more on sound research instead of spur of the moment feelings. This shows true in my search for the ultimate 308 rifle. Several years ago I was asked “If I could only have one gun what would I choose?”

It took me a while to come up with my answer. Being a Glock fan boy, most would assume I would choose a Glock, however they would be wrong.

My choice was the SCAR 17. Why the SCAR 17? It has the capability to handle up close situations, and still take game at long distances. It is light, very maneuverable and it is chambered in the very available .308WIN

If you asked me that same question today my answer would be a little different. Since I was a kid I have been interested in long range shooting. I spent summers with my grandfather. We went shooting at least once every week. His friends would have him load up some rounds for their guns, we would take them to the range where I would shoot them. Grandpa and I would go back to the reloading bench, tweak the load and head back to the range for more trigger time.

I became obsessed with accuracy at long distance. I am a highly competitive person and thought maybe I could test my skills against others.  I started looking into the Professional Rifle Series. I tinkered with building a couple rifles. I built a rifle for a friend out of a Remington 700 action that could equal any other competitors rifle. For my own personal use I struggled with what I should build for myself to compete with.

A few months ago a close friend suggested I should take a look at what Robinson Armament Co has to offer. I had never heard of them, so I checked all of my local gun stores. No one carried their rifles.  While at the range I took note of what others were shooting, no Robinson Armament.  I asked my buddy again if he was sure it was Robinson Armament he was referring me to.

He pointed me to the internet and explained they had built a rifle for the military’s modular rifle competition that resulted in the SCAR. I had a computer in front of me, so I wasted no time drooling over the options Robinson Armament’s website offered. 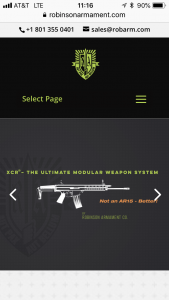 Robinson Armament is a small firearms manufacturer based in Utah . They have a handful of dealers around the country, but after shopping on their website I realized it would be easier to order what I want directly from them.

I am glad the more mature me was placing the order, so I could get exactly what I needed. Taking a look through their website I was able to build my rifle without any hassle. I choose it chambered in .308 win, barrel length 18.6″ heavy profile, and an olive drab and black finish.

While waiting for my rifle to arrive I watched every video and written review I could find. The reviews were older and pretty mixed. From what I gathered I could expect a rifle that was very capable of shooting a 1” group at 100 yards. One reviewer said it may not like the cheaper ammunition but worked great with most other ammo. Based on the customer service reviews I have no problem spending a few thousand on their rifle sight unseen. Guns are manufactured by machines and humans and it is natural to have a hiccup every now and then.  It’s the response of the company that matters most.

My plan for this rifle was to set it up as a designated marksman rifle capable of engaging various targets out to 800 yards. The Precision Rifle Series has a gas gun series with a tactical division. If this gun can consistently achieve 1″  or better groups at 100 yards, I will put it to the test on the competition circuit.  Looking through the equipment used by the competitors mine would be the only Robinson Arms used in the tactical division. Most of the rifles are GA Precision, Seekins, and a few competitors shoot LWRC, some pretty stiff competition.

Before I invest in top tier optics, extra mags, ammunition and match fee’s I have some pretty tough tests that I want to run the gun trough. Basically, I want to make sure it would perform accurately and flawlessly in real world conditions, rain, heat, cold, wet, dirty, and dry.

I have had numerous new firearms, I typically don’t bother with break in procedures, but this gun is different. I want the upmost reliability and accuracy possible. I need it to engage targets at the muzzle and all the way out to 800 yards without the need to take follow-up shots. I also need it to run 200 to 300 shots consistently without being cleaned.

Everyone you talk to has advice on the best way to break in a barrel.  The break-in procedure you want to use depends on the purpose of the gun. Are you building a bench rest gun, a hunting gun, or a designated marksman rifle that must engage multiple targets quickly in any environment? For my break-in procedure I turned to YouTube.

TiborasaurusRex has an great set of videos on his channel dedicated specifically to long range shooting. He specialized in the type of shooting I will be doing.  He consistently gets first round hits out to and over 1800 meters. Robinson Arms also has a recommended break-in procedure for the bolt and gas system which will also be adhered to.

It took about 7 weeks for my Robinson Armament XCR-M to arrive. I wasted no time in picking it up from Southwick’s Guns in Plainwell, MI. 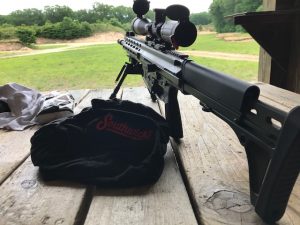 The gun came packaged in a hard case. The owner’s manual is a small very detailed book. Before I even touched the rifle I read it in its entirety. I made sure all the parts were there including the 6.5 Creedmoor barrel I ordered just in case I may want to shoot in the open class.

The first task was to tear down the gun and give it a good cleaning and make sure it was properly lubricated.

This was the easiest rifle to disassemble. No pushing on the pins like an AR-15, no trying to push in a button while lifting off a cheap metal cover like an AK. No, it was just simply pushing a button. The piston system pulls right out leaving easy access to the chamber. The Robinson XCR-M looks like a cross between an AR-15, AK-47 and an FAL. They took the best parts of each design and put it into this gun.

The XCR-M is heavier than the SCAR, it is an all metal gun. Solidly built, it has an adjustable length butt stock that locks in place and folds out of the way. The upper is completely one piece so you have plenty of uninterrupted available rail space for whatever optics you choose to install. I ordered mine with the M-LOK upper as I already have several M-LOK accessories.

Not knowing exactly how this gun would perform I was reluctant to put a lot of money into optics and a mount, so I went with an excellent quality scope that I could get my hands on cheap. The SWFA Super Sniper with a fixed 20x magnification. Not ideal for competition due to small field of view but perfect for seeing what accuracy the rifle was capable of. I also installed a Harris bi-pod to keep it steady. The rings I had were not quite tall enough to mount the scope, so I had to go with a riser until my new permanent mount arrived.

With everything installed this gun looks impressive . It feels like you’re looking at a Ferrari. Sleek, smooth, and ready to do work. I think I could stare at it all day.

I picked up several different brands of ammunition to test. A good friend and competitive shooter Ben Harrington gave me a couple boxes of ammo, a shooting mat, and the shooting bags he used in competition. Ben has competed in the long-range precision discipline and has since moved on to tearing it up in the pistol shooting world. His tips and equipment will make it easier to get the best possible groups that my Robinson Armament XCR-M is capable of.

My first impressions…  this gun is AWESOME. It feels good, the bolt is the smoothest I have ever felt on a semi auto, it has a long sleek profile, easy to clean and it fits me like a glove. Now the only question is how does it shoot? Will it meet my expectations? Is it worth the money? We will find out soon.