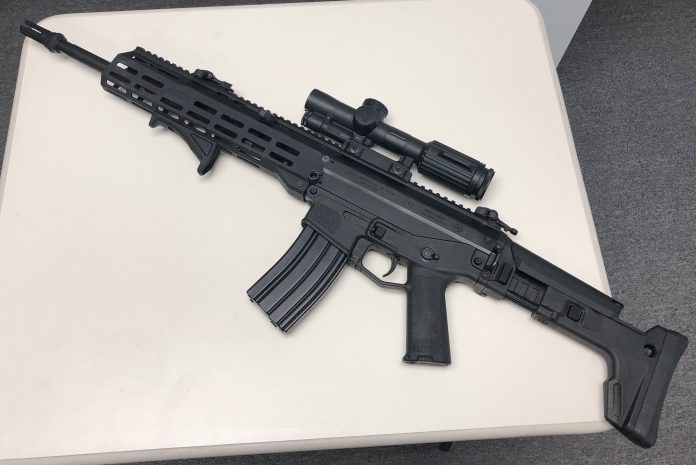 The Remington/Bushmaster Adaptive Combat Rifle (ACR) is a modular semi-automatic rifle designed by Magpul Industries, known initially as the Masada (not to be confused with the developing handgun from IWI of the same name) the ACR was to be a cutting edge modernized service rifle.

The ACR, like the SCAR, H&K 416, XM8, and X95 was an early 21st century venture into modernizing small arms technology. Magpul was a much smaller entity at the time and could not bring the rifle to market in the way they wanted and so they partnered with Bushmaster and Remington to do so…

This would not turn out in the rifle’s favor…

Magpul had voiced a number of promises with this new rifle. The chief two among them were reasonable cost and lightweight. Bushmaster failed delivery on both those critical accounts and did so far behind schedule. Bushmaster was plagued with utterly ridiculous quality control concerns on a heavier than promised rifle that was priced at twice the original estimate.

Magpul had stated the Masada would come in near the cost of a high quality AR like a Daniel Defense or LWRCi DI, topping out at the most near something like the X95 for the (E)nhanced model. The extensive use of polymer, components from the AR15 platform, and the miracles of modern industry were going to make this the 21st Century Everyman’s Carbine.

The ‘Everyman’s Carbine’ it was not, that honor is the AR15’s for the whole of the foreseeable future.

Instead we, the excited consumer public, were handed a rifle selling for nearly $3,000 for the basic model. No quad rail or adjustable stock, just an MOE inspired handguard and a fixed length of pull MOE stock, both of which could be had for the AR for less than $100… Oh, and a safety selector that didn’t stay selected to actuate a very very rough mil-spec trigger.

The Enhanced model was even more expensive, if you could find one at all. Bushmaster chose 1:9 twist barrels for some incredibly head scratch inducing reason, putting such a barrel on a rifle that was clearly designed for a military 1:7 seemed lazy and out of touch. The slower 1:9 twist, while useable, was a hallmark of ‘budget’ rifles of the era and was never seen on high end carbines. This fact further cheapened the felt value of the far higher than promised priced rifle.

The most svelte version of the ACR weighed in the same as the SCAR17 for very nearly the same dollars on the table. Bushmaster had delivered none of the Magpul promises… and the rifle was far from flawless, it wouldn’t outmatch the M4A1 as released.

On these dark chapters for the highly hyped rifle… I spoke with Remington. Why these issue occurred came down to one very simple thing. Logistics. This was a project that didn’t get the attention it needed at the time it needed it. Remington higher couldn’t pick where to build it, where to source or manufacturer parts, or nail down crucial details on QC with all of its other acquisitions and projects also running simultaneously.

As for military contracts only Poland bought a few and then proceeded to reverse engineer it (or it certainly looks that way) into the MSBS to produce domestically as their service rifle. They even made a neat bullpup kit for it.

A group of enthusiasts still purchased the rifle. Some early adopters were disappointed by the teething and QC concerns, they moved on while others remained. The ACR developed a sort of pop cult enthusiast culture and is well liked overall by the owners who kept it. By many reports it makes a wonderful SBR and a great host for a suppressor. The Call of Duty series cannot do away with it, it’s almost a franchise brand item and it makes appearances in most shooter games today. So…

I had never fired an ACR until this year. It was always the rifle that seemed to have been passed by for shooters. Surpassed due to its own production problems and lack of serious agency adoptions. However, Bushmaster is still producing the rifle and I decided to indulge my nostalgic Modern Warfare 2 fanboi and see if the kinks were gone.

I picked up an ACR-E, black, and had it shipped to me. While ACR variants of the past had a myriad of options, often hard to distinguish, including various stocks, handguards, calibers, and barrel twist rates, Bushmaster has cleaned up the categories to align with the industry at large, Basic and Enhanced.

The ACR-Basic comes with the Magpul MOE style handguard that supports M-LOK attachment and the ACR-Enhanced comes with an aluminum forearm in MIL-STD-1913, Keymod, or M-LOK.

Caliber options include 5.56mm, 6.8 SPC II (for those shooting the exotic ammo), 300 Blackout, and 450 Bushmaster (both calibers developed under Remington). The typical commercial variants have 16.5″ barrels with the 10.5″, 14.5″, and 18.5″ available aftermarket. I will note that the aftermarket barrels for the ACR are far less expensive than SCAR barrels, 46% of cost comparing MSRPs. The barrels are cold hammer forged, chrome lined, and quick replace. This is what makes the platform such a potent candidate for a From 1 SBRing.

Muzzle to stock, the ACR of today is a put together and fairly forward thinking platform. It supports suppressor use right out of the box with an AAC 51T three prong flash hider (yes, it rings). Standard muzzle threads allow you all the flexibility in the world to replace it. The gas system and short stroke piston are integrated to the barrel assembly. Gas blocks are two position, (S)uppressed and (U)nsupressed. The barrel nut and handle for changing the barrel are also part of the assembly, all one neat package.

There was some talk about the return to zero capability of the rifle and this barrel change system, but let’s keep that in operational perspective.

An absolute return to zero on this system is not a necessary feature. You are not going to quick change your barrel in a gunfight, not on your carbine. Even though the ease of the system makes it an operator/user level task the process will require you to confirm zero again when you change operational configuration. Every time you mess with zeroed portions of a gun you reconfirm zero, period. Return to zero makes this process easier, it is not a substitute for it.

The quadrail handguard of the ACR is a monster. It’s also short. The design supports the SBR 10.5″ barrels. I swapped it for the M-LOK 12.5 from Midwest Industries. The MI M-LOK felt lighter, more comfortable, and is a more rigid handguard. The system mounts via one captured push pin, easy off and on, and tracks into a pair of receiver cuts on the front. The tradeoff picking this design for the ACR is that no zeroed equipment can mount to the handguard, there is far too much play. Anything that retains a zero, a PEQ or DBAL, must mount to the top rail on the receiver. This is notable on both the factory and MI handguards.

The factory stock Enhanced handguard supports QD sling swivels at the 3 and 9 o’clock positions. These mounts are removable via a couple small hex screws. It is necessary to remove them if you want to utilize the front portion of the picatinny rail. Two additional QD’s at 3 and 9 are on the receiver near the barrel lock up and one reversible QD is on the adjustable stock. The design allows you to set the rifle up comfortably in a number of two-point sling configurations. My preference has the stock QD in the right side/3 o’clock position and wrapping around to the 9 o’clock QD on the receiver.

Of note, the fact that the QD’s are not rotation limited is less than ideal and one of the features I most dislike on the rifle overall. The sling twists and binds. The positions are excellent but not having them limit rotation is a detail that shouldn’t have been missed at a rifle this price and trying to compete this late in the game.

To be fair the SCAR doesn’t have rotation limited QD’s either. The factory configuration is for HK clips by SOCOM TPD. The ACR does have a rear receiver HK style sling hook, similar to the SCAR.

The charging handle is non reciprocating and well placed. There is an ambidextrous option available from Bushmaster that adds the capability to charge the ACR from either side. The bolt catch is a mirrored design next to the trigger guard and useable with your index finger. Magazine release and 90 degree throw safety selector are equally ambidextrous and mirrored.

The ACR is legitimately a paragon example of ambidexterity, especially adding the dual charging handle. About the only thing I wish they would have done or updated on the control suite is AR grip compatibility. MOE style isn’t bad but I prefer K2 or BCM Mod 3 and I do not have that option.

The stock is 7 position, foldable, and with a cheek riser for optics. The design is so well liked it’s available for several other rifle systems, including the SCAR. Other than wanting the QD point to be rotation limited it is a fantastic stock.

The ACR comes “Optics Ready” which is a polite way of saying no iron sights. I chose a set of MI Combat Rifle Sights. Lightweight, lo-pro, a middle diameter rear aperture. The MI CRS keep a perfectly acceptable group at 50 yards, printing about 2 MOA with M193 ammo.

Conclusions on the ACR

Is the ACR worth considering as carbine?

The rifle’s performance was more than enough to justify its consideration as a service rifle or defensive rifle.

Personal protection, patrol rifle, multi-gun, or CoD WM2 Cosplay. The ACR sends 55gr and 62gr ball ammo wherever I asked it. The manual of arms is easily translatable from the AR and SCAR. It is a maintenance light piston system with a fair amount of aftermarket support. It’s a great SBR host as the conversion is far less expensive than an X95 or SCAR for rebarreling.

It’s detracting factors are minor, but present. The stock handguard, 9lb weight, and QD sling points are less than ideal but solvable aftermarket. A new trigger and new handguard do the rifle justice.

At an MRSP of $2,249 and available in the much more reasonable $1,700-$2,000 range the Bushmaster Adaptive Combat Rifle has come into its own as a contender. Better late than never.