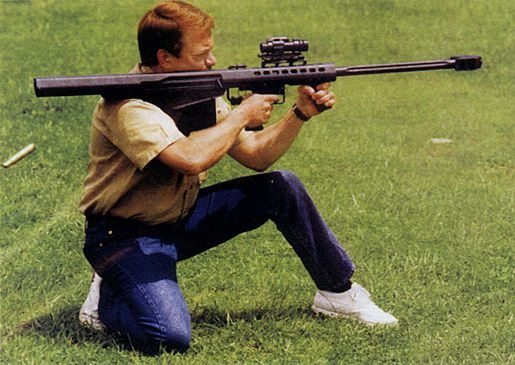 The Barrett .50 BMG wasn’t the first anti-material rifle, but it was the first American-made, semi-automatic .50 BMG rifle. Ronnie Barrett was a madman who ended up designing one of the most successful anti-material rifles ever made. It’s fielded by multiple military forces, including the United States. The original M82 has seen numerous improvements and changes and currently goes by the M107. Between the original M82 and the M107 sits an oddball known as the M82A2.

The M82A2 was created at the behest of the US Military as a shoulder-fired variant of the M82. It’s unknown exactly how many were made, but some estimates claim only ten were produced or at least tested by the US Military. Since you’ve likely never heard of it, you are right in assuming the Barrett M82A2 went nowhere.

How do you make a rifle that weighs over 30 pounds and is almost five feet long shoulder-fired? That’s the million-dollar question. I know someone out there is thinking, wait, you can fire the M82 from the shoulder! I’ve seen Jerry Miculek do it! Sure, you can fire the weapon from the shoulder, but it’s not exactly easy or accurate. It might be fun, but it’s not something your average soldier would ever do.

To make this mighty weapon shoulder-fireable, Barrett did some mad science and bullpupped the M82. The resulting gun was the M82A2. It’s not your traditional bullpup in layout. The magazine is in front of the firing arm, and right behind the magazine sits the stock that goes against your shoulder. You still have a lot of rifle above and behind the stock, and much like a recoilless rifle, the rest of the gun sits behind you.

Up front, we have the trigger and pistol grip, as well as a second forward pistol to help increase control. Right above the trigger sits a scope rail, and an optic is absolutely necessary. The M82A2 shifted the weight and balance of the weapon to allow the shooter to manhandle the gun without it being overtly awkward or unbalanced.

Now instead of having all of the weight in front of your shoulder, a good bit of it is behind and under you. While odd looking, the Barrett M82A2 accomplished its goal of being a shoulder-fired .50 BMG rifle.

The mission of the M82A2 isn’t exactly known. There is some speculation that it is a cheap anti-helicopter weapon. It is at least cheap when compared to something like a Stinger missile system. Soldiers could engage low-flying aircraft with fairly effective fire. Of course, helicopters are fast-moving, and this idea relies on something hovering more than flying.

The military didn’t speculate it had to be a bullpup design. They just wanted a more portable system that could be used in a wider variety of situations. The M82A2 could have been a squad-level anti-material weapon for engaging everything from vehicles to dug-in positions. It would be much easier to carry and shoot than the M82 and other variants of the Barrett rifles.

It hasn’t been revealed what the exact purpose of the weapon was, but we do know it was not adopted or taken beyond the prototype stage. Brandon “the AK Guy” Herrara is one of the few people who own one, and his video gives you a good idea of how the weapon handles. Barrett seemingly met their goal.

On the Way Out

The Barett M82A2 wasn’t successful but did pop up in some pop culture. It was in Jurassic Park 3 and has a cameo in the Chuck Norris feature Top Dog. I knew it from Metal Gear Solid Four. Other than that, this rare .50 BMG is pretty much vaporware these days. It’s a neat idea but not a successful one.