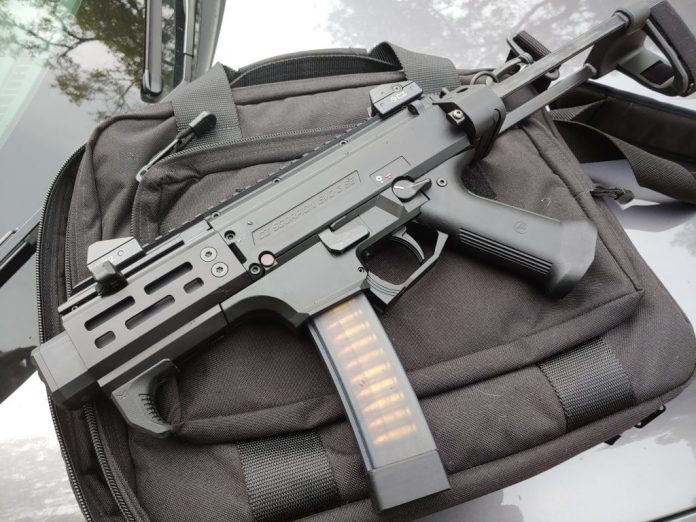 I love pistol-caliber carbines and subguns. I find them to be a ton of fun to shoot, and they tend to be some of the easier shooting weapons out there. PCCs come in all sizes and shapes and are perfectly suitable for home defense, plinking, and of course, competition. With the price of guns and ammo right now, a PCC makes sense. Budget PCCs make even more sense.

There are lots of budget PCCs out there, and most are generic AR clones of various quality considerations. Those can be okay, but I want to dig through the crap and deliver you the best budget PCCs out there. What’s a PCC, and what’s a subgun? They are two feathers from the same duck for our purposes.

Both shoot pistol calibers, and the main difference is more or less a legal configuration. A carbine is legally a rifle with a stock and what’s likely a 16-inch barrel. A subgun is a fancy word for a pistol-caliber large format pistol. Your CZ Scorpion pistols and MP5 pistols fall into this category. In full context it is short for submachine gun, which is a select-fire PCC and wouldn’t have a barrel length requirement beyond design performance. But since we keep redefining the redefinitions and overcomplicating things legally, subgun will be a pistol format PCC.

When I say budget, I’d love to say below 500 dollars, but that limits us to very few firearms these days. Inflation is a real pain, so let’s define budget as anything below 700 dollars.

The Top 5 Budget PCCS and Subguns

The Extar EP9 was a gun I tip-toed around for some time. I never bought one because it’s a new company and an unproven platform. Extar seems to sell direct to consumers to reduce costs, so I could never handle one in a gun store. Luckily I finally drifted across one, and boy, oh boy, color me impressed.

It’s not fancy, but it’s effective, smartly designed, and affordable! For less than 500 dollars, you get a braced subgun that takes Glock mags and looks a little like an AR15. Looks like it, but it isn’t. The gun has a AR 15-like lower that mimics AR controls and design.

It’s a blowback-operated gun with a recoil dampening system to take some of that blowback sting out. It’s super nice to shoot, highly reliable, and comes with a long optics rail and an M-LOK handguard. Not bad for $449.

One of the old-school budget PCCs comes from Kel-Tec, which might be Kel-Tec’s most popular and affordable long gun. The Sub 2000 is a simple blowback-operated PCC that can trace its lineage back to the Sten gun. It’s a simple tube gun design that chambers either 9mm or 40 S&W and uses popular pistol magazines from companies like Glock, SIG, and Smith and Wesson. 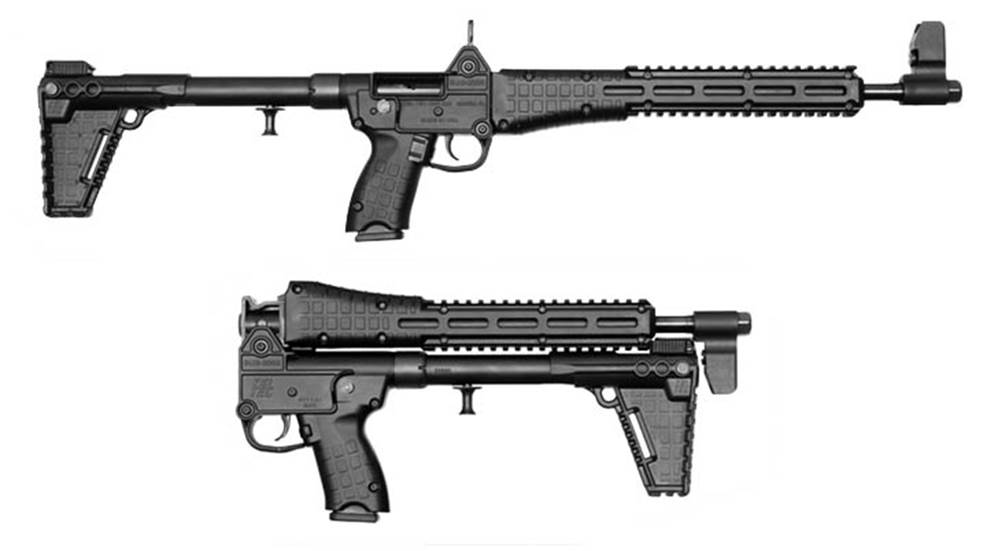 What sets the little gun apart is the fact it folds in half. The barrel folds upward and over the stock and locks in place. This creates a much shorter platform that stores easily and can easily be tucked into a backpack or messenger bag.

The recoil is snappy, but the gun is light. The Gen 2 features a hybrid handguard with M-LOK slots and Picatinny rail. It’s a fairly modern take on a very old operating system. It’s also easily found for less than 700 dollars, and I got mine for $350 a few years back. 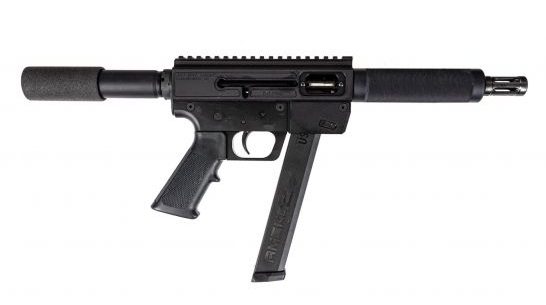 What’s really neat about these rifles is the take-down design. The barrel and handguard drop off the receiver quickly and easily, making it a very compact package. These guns come in both PCC and subgun options.

Besides the breakdown capacity, shooters can convert calibers between 9mm, 40 S&W, and 45 ACP. These guns use either Glock or M&P magazines. They come in versions that are both SAFE Act and California compliant, to top it off.

Ruger’s simple PC Series guns have become insanely popular and spread like wildfire. Ruger produces both a PCC version and a subgun version. However, the PCC version tends to be a little cheaper at around 600 dollars. The PC series use either Glock or Ruger Security 9 magazines, and the magwell is convertible.

As you’d imagine, the gun uses a blowback system, but Ruger uses a unique system to reduce recoil. A dead blow sits on the bolt, and this shortens bolt travel and reduces both recoil and muzzle rise. It’s simple but effective, and that makes it affordable.

These are also take-down rifles that break down with ease. This cuts the length effective in half. They’ve become popular enough that Ruger produces several different configurations, but the standard is the most budget-friendly.

Our top dog in the world of budget PCCs is the Aero Precision EPC. The Aero Precision EPC is not exactly a rifle or subgun. It’s an upper and lower receiver set. The user can then customize and build the PCC or subgun of their dreams. You can build a very simple and very affordable PCC with the EPC at its core. 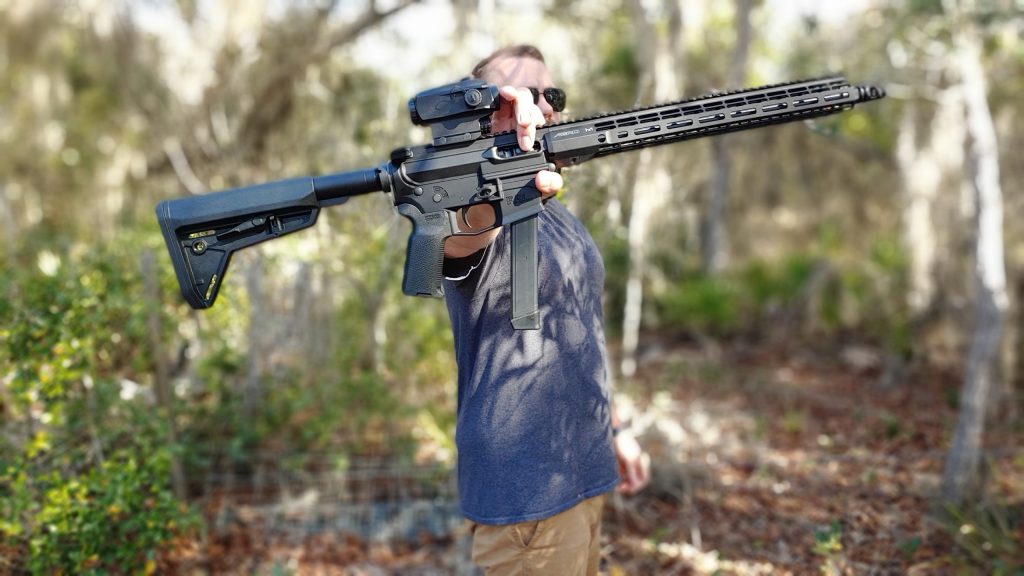 Magazine-wise, Aero went with Glock, which makes the most sense from a budget perspective.

The EPC differs itself from the standard Glock compatible AR9 lower and upper by implementing a last-round bolt hold open device. This way, you don’t get a click when you expect a bang and have to rush a reload. Additionally, Aero went above and beyond to design an ergonomic lower with excellent controls and a great flared magwell.

The EPC allows you to have whatever priced PCC you want, and it can be built for dang near any task.

Budget PCCs don’t necessarily mean crappy PCCs. There are plenty out there that are worth your hard-earned cash and happily push the limits of what a budget-friendly firearm can do. Hell, get an 80 lower and do it yourself. Any of the five above will treat you well.