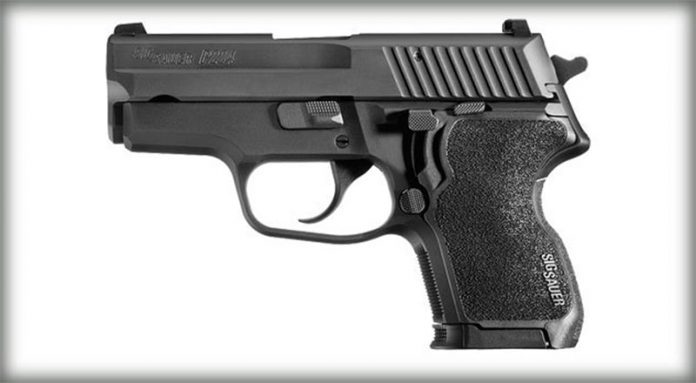 The scene is Las Vegas, NV. The event is my first first SHOT Show experience. I, a shy female shooter, only newly introduced to the wide, and varied firearms culture outside of my own upbringing, was absolutely agape. Nothing could have prepared me for the sea of humanity surrounding thousands of islands of every piece of shooting, hunting, or outdoor gear I never even knew existed. In planning out what I wanted to accomplish during the scant four days of SHOT, I drafted up a long list of all the firearms and gear manufacturers I wanted to try to see my first time in Vegas. One of the largest manufacturers on that list was SIG Sauer—I had to make use of this opportunity to check out the new pistol I had heard they were planning to display at the show, the P224. Finally, after two more years of making firearms related videos, and one year after embarking upon my written career in the shooting sports world, I found myself on a test and eval waiting list for the little pistol that I remembered from my very first Show. I’ve had a great time pouring lead through it, seeing how it handles at the range, and can now share my review with you.

My hands tend to fall a bit short of the mitts most men sport, but they are average-to-large compared to most other ladies. That being said, I still found the P224’s 1.4” wide grip left my pinky without purchase. Were the T&E pistol I received chambered for the less energetic 9mm, I may not have considered that an issue, but the .357 SIG has a way of bucking that makes a shooter appreciate a little extra surface area to hang on to. On the positive side, though, shaving down the grip gives this little SIG an edge in concealability over its larger SIG siblings, the full size P226 and the compact P229. , The punchy recoil of the .357 SIG round had me wishing the P224’s grip sacrificed some concealed carry friendliness in exchange for a more aggressive beavertail. Although the grip is short, it isn’t lacking in comfort. The one piece Hogue custom G10 grip piece provides a comfortable, yet sufficiently textured grip surface. The issues that I’ve had with trigger reach on the full size P226 were non-existent with the newer baby SIG.

I’ve always had good experiences with the triggers on SIG pistols, and the P224 is no exception. The P224 is offered with either DAK or DA/SA triggers. The model in this review uses the DA/SA system. The SIG’s double action travel is moderate. SIG’s website puts the double action pull weight at 10lbs, but my Lyman trigger gauge averaged it at 10lbs 12oz. It sounds heavy, but the travel is smooth and consistent, with a distinct break. In practice, I found the heavy trigger didn’t effect my ability to keep shots on target. As one would expect, the single action pull is both shorter (the travel drops from ¾” down to ⅜”), and lighter, pegging my Lyman gauge at an average pull of 5lbs 11oz.

The P224 uses three dot system SIGLITE night sights. I found the fixed sights to provide ample sight picture in any light condition, despite the cropped sight radius of 5.3 inches. The dots are large enough to track easily between shots, even with the .357 SIG’s recoil. It has been my experience with some SIG pistols that they require a lower 6 o’clock hold, but with the P224, a combat hold worked just fine.

The Nitron-coated steel slide features roll-marked engraving on one side and houses the P224’s bantam 3.5 inch barrel. With such a short barrel, and therefore short sight radius, I anticipated some degree of negative impact to accuracy on the range, but that has not been the case. The compressed .357 pistol is a handheld tack driver (more on that in the Accuracy section below). The The P224’s solid hammer actions neatly. If you need to manually cock the checkered hammer, its size allows it to be manipulated with one hand. One feature you won’t find on the P224’s slide is a loaded chamber indicator (LCI). No LCI means this pistol isn’t California friendly; combined with the lack of magazine disconnect, it’s not Massachusetts approved, either—sorry guys.

The aluminum alloy frame helps to keep the full metal pistol’s weight down. Unloaded, the P224 weighs in at 29.0oz, which is 3oz less than the compact P229, and five ounces less than the full size P226. The hard anodized frame includes front strap checkering and right-handed controls: decocker, (reversible) magazine release, slide release, and takedown lever, all with checkered faces. This subcompact does not feature an accessory rail.

The P224’s takedown is simple. First, make sure the firearm is clear. Keeping the magazine out, lock the slide back to the rear. With the slide locked back, rotate the takedown lever downward into a vertical position. From there, you can grab the slide and as you hit the slide release, it will slip forward off the frame. After that, you can push the guide rod forward (toward the muzzle), compressing the spring enough to remove it and the recoil spring. With the recoil spring and guide rod removed, you’re free to pull the barrel out through the underside of the slide. Easy peasy.

SIG markets the P224 as a cropped version of their larger duty-style handguns, the full size P226 and the compact P229. If you were curious just how “chopped” the P224 is in comparison to either larger pistol, I’ve drawn up a table for comparison.

Thanks to my dad, I have a P226 on hand to check out side-by-side with the P224. The P224 is noticeably shorter—one inch, precisely—in height and length. Within the P226’s slide is a barrel 0.9” longer than that of the subcompact. If you compare the widths of both pistols, however, the difference is less substantial. They differ only by one tenth of an inch.

When I first brought the SIG P224 out to the range, I wondered whether the short 3.5 inch barrel was enough to effectively manage the recoil of the hot .357 SIG round. After several boxes .357, namely Fiocchi 124gr (1,350 fps muzzle velocity), Sellier & Bellot 140gr (1,352 fps muzzle velocity), totaling some 500+ rounds, I’ve discovered accuracy is a non-issue. During many of my range sessions with the P224, I shot it from 30ft at a steel Action Target Tactical Torso silhouette with a swinging chest and head plate. I had no issue putting all 10 rounds through the 3″ triangle head plate. I won’t pretend the little guy doesn’t jump while I’m shooting, but I’ll get into that in the Perceived Recoil section.

In my testing process, the P224 fired reliably. The handful of errors I witnessed with this pistol can each be traced back to limp wristing. The little subcompact is just too spirited to not require a little manhandling. This was where I found myself wishing it had a nice beavertail to work with. That would make acquiring an effective grip faster with less need for muscle memory development.

This is one area where the .357 SIG round makes quite a difference. The .357 SIG was developed as a .40 S&W, necked down to receive a 9mm projectile. This development was purported to give the shorter round similar ballistic performance to the already popular .357 S&W Magnum cartridge. A comparison of several brands of .357 SIG and .357 Magnum ammunition yield similar muzzle velocities: ~1,400 fps, +/- 50 fps. This is notably punchier than the standard muzzle velocities of either .40 S&W or 9mm cartridges (for which the P224 may also be chambered), which average closer to the 1,000 fps range. Not surprisingly, this means that the .357 SIG, namely when fired through this small subcompact, results in some prominent perceived recoil. Fortunately, although the P224 demonstrates notable perceived recoil when firing the .357 SIG round, it’s not as snappy of an experience as I had expected. Similar to the “push” the .45 ACP round is often described to cause, the force of the kick feels more rearward in its direction than upward. The result is a fast, accurate round without the negative impact of sharp muzzle flip.

Besides the perceived recoil effect, there are two other points to consider when debating a P224 in .357 SIG: cost and availability. While it isn’t impossible to locate .357 SIG, it is notably less common than other self defense calibers, such as 9mm, .40 S&W, or .45 ACP. In preparation for my review, I did a good deal of driving around to the different ranges and firearms stores to find enough ammo to test. Granted, if you shop around, you’re likely to find better deals, but when I got a hold of .357 SIG, it generally didn’t sell cheaper than $25 for a box of 50. While I wouldn’t consider 50¢/round an exorbitant price—after all, I’ve spent  $2.50/round on .500 S&W (ouch!)—the more you train with it, the more of a burden the ammo cost becomes—just a little food for thought.

According to SIG, the P224 was specifically designed to accommodate concealed carry. The grip shaves 0.1 inches off of the P229 and P226’s 1.5″ width, but the most significant size reduction is visible in the overall length and height. The reduced P224 stretches 6.7in long with a height of 4.5 inches. These dimensions bring the SIG into the size realm of Springfield Armory’s newer subcompact, the XD-S 4.0. The XD-S 4.0 runs an overall length of 7.0″, nearly one-third inch longer than the subcompact SIG, but with an overall height of 4.4″, it is a touch shorter than the P224. One of the perks of the P224 is that you have options, whether you prefer the convenience—and additional two rounds of capacity—of the 9mm, the pop of the .357, or the “compromise” between the two, .40 S&W. Those who already carry larger SIG pistols might also appreciate the similar manual of arms in a smaller pistol package.

Tiny disclaimer: my personal experience is inescapably colored by the fact that I’m a woman. That being said, I found that the little SIG carries like an overweight XD-S. I especially appreciated the short slide and grip when tucking it into my jeans—less there to print under my tshirt and cami. However, I did find the P224 a bit wide. It’s actually wider than my 1.25in full size Beretta M9 pistol by 0.15in. The SIG extends an extra half inch more than the narrow XD-S’s 0.9 inches, which made my skinny jeans fit a tad tighter than I normally like.

The quality that the Navy SEALs rely on in their SIG sidearm can be seen in its subcompact little brother, the P224. As a subcompact, the P224 is the next step in taking a popular full size, and compact pistol, and scaling it down to meet new needs. The drop in stature and snag-free design has its drawbacks in recoil management when used with the high powered .357 SIG round, but if the .357 isn’t what you need for self defense, you’re not without options. The P224’s form and function demonstrate that it was purpose-built to better suit concealment needs of officers and self defense carriers alike. The SIG P224 may be smaller than its predecessors, but don’t let that fool you; the .357 SIG gives the little P224 a lot of guts.