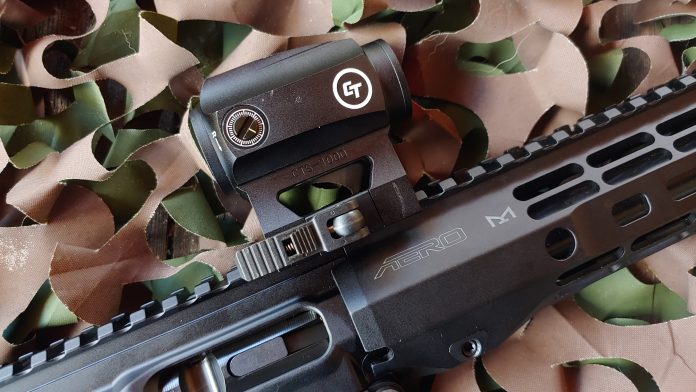 What the hell is happening these days? I feel like every time the firearms community moves forward, we find something to move a little bit backward. Lately, we’ve seen more and more people get into the firearms world. However, this seems to mean a lot of people are doing some silly things these days, again. One of these things is bridging optics. It’s been popping up enough that an entire firearms subreddit exists to point it out and make fun of it. It’s a silly thing to make fun of, especially when you get the opportunity to correct these shooters with constructive feedback.

With that in mind, we arrive here. Let’s talk about why bridging optics is bad.

Bridging optics is a phenomenon that commonly affects the AR 15 rifle. The design of a flat top AR 15 places the optic in line with the top handguard rail. Bridging is the act of placing the optic on both the receiver’s optic rail and the handguard rail. This ‘bridges’ the upper receiver and rail. I’m sure there are plenty of other guns this is doable on, but it seems to be mostly confined to the AR-15. Most modern rifle designs, and select AR receivers, use a much longer continuous top rail to make this a non issue.

But Travis, I’ve seen super commando from Task Force 420 bridge his optic to his handguard. What’s the deal?

Well, maybe he did, and there are configurations that work for this, as stated above. Monolithic upper receivers make the handguard a part of the upper receiver. Other times they are specific mounts that push the optic slightly forward and over the handguard but still lock it to the receiver rail only.

Other times optics like Eotechs have big battery compartments that hang over the handguard. The mount itself is still mounted to the flat top upper receiver. If the guy from SEAL team 69 is doing it, he likely has a special mount or upper and rail combination.

Why Is It Bad?

The crux of why bridging an optic is bad goes back to the reason why you are using an optic in the first place. Optics help with accuracy and accuracy is paramount. An optics rail remains still without any pressure on it. A handguard gets lots of pressure. It shifts and moves way more than you know. Even if the two are aligned, the handguard is taking pressures that the upper receiver is not.

Bridging an optic puts the pressure we try and take off barrels and places it on your optic. Even red dots can lose zero and be somewhat unreliable. This may not result in a miss up close, but the simplest fix is not to subject the optic to the pressure in the first place because it is unnecessary. Can you zero with an optic bridged or mounted to the handguard? Yes, you can. However once you exert enough pressure on the handguard in a different direction your zero is now moot.

But What About My BUIS?

When you start rocking and rolling an AR, it’s tough not to say that a set of BUIS isn’t a bad idea. They are cheap enough to be a simple and efficient addition to your rifle. The problem comes with large optics, magnifiers, and red dot combinations, and other things that eat up those 13 rail slots on an upper receiver. Still, bridging the optic isn’t the answer.

There are a few things you can do. First, ensure the optic and magnifier do not exceed the length of your upper. Aimpoints have gotten smaller for a reason, and magnifiers can vary greatly in size. A 6X magnifier might not work well with a full-sized red dot and BUIS. You may need to use offset 45-degree BUIS or ditch them. Quality red dots can take some serious abuse so you might not need BUIS. I’d rather ditch them than be caught bridging optics.

Recently we’ve seen the release of micro magnifiers from SIG, EOTech, Trijicon, and Vortex, and they may help as well. Additionally, mounts that place the red dot slightly forward can help. If it can be pushed forward ever so slightly, it could make the clearance necessary to ensure you don’t bridge your optic.

For magnified optics, use a cantilever mount. These mounts push the optic forward and can be a real lifesaver when you get larger optics. They used to be quite pricey, but Aero produces a lightweight, high-quality option for like 75 bucks. All these options should make bridging optics a thing of the past. They come in a variety of forward swept designs to push the ocular lens of the magnified optic where you need it, usually hovering about where the rear iron sight would be (if you have a flip up rear use that as a starting point for positioning your lens).

Bridging Optics Is No Bueno

Bridging optics can be done correctly, but with modern mounts, red dots, and magnifiers, there isn’t a big reason to take those pricey routes. They involve having matching receivers, rails, and double and triple checking fitment. I’m not saying there are no reasons to do so in the modern era, there just aren’t many for the average shooter. Hopefully, I’ve both identified the problem and provided you with an optical solution.

Is bridging the end of the world? No. But again, it introduces a failure point that it is entirely unnecessary to introduce and is very subject to the quality of receiver and handguard being used.