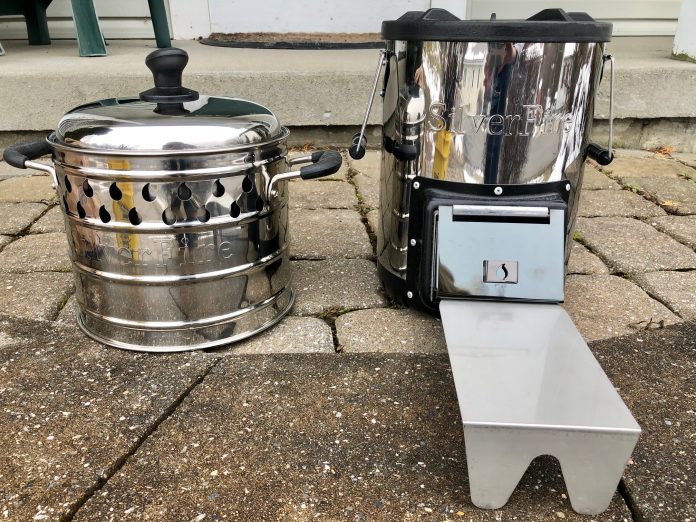 SilverFire disaster and recreation products are the makers of a variety of off grid stoves – from backpacker size to cabin size. I’m going to tell you today about the “Survivor” Rocket Stove.

I visited SilverFire at the SHOT pop-up event in 2019, and was intrigued enough to give their Survivor Rocket Stove a try. But I didn’t get around to ordering one until December. Yeah, I know – life takes over sometimes.

SilverFire advertises that their gasifier stoves run on “biomass” rather than commercial fuel. The advantage to this type of stove and fuel source is that it will run on virtually anything that burns – you aren’t limited to dragging around bottles of propane or bags of charcoal.

I also purchased SilverFire’s specialized pot – called the Dragon. The Dragon pot is skirted, which allows heat/flames to contact more pot surface area for faster heating. As a home test I wanted to see how long it took to boil a quart of water

This stove, although not as small as the backpacker version, is still quite portable for camping and tailgate parties in addition to weather emergencies and power outages. The stove has carry handles and is about the size of a kitchen scrub bucket.

To be clear, this isn’t a “warm yourself” kind of stove. This stove is designed so that the majority of the heat is retained and directed to the cooking surface – not out into the environment. What it is designed to do is rapidly cook food or boil water using a minimum of fuel and produce a minimum of ash waste in the process.

Because there is secondary combustion, this stove also produces minimal smoke – in case you are worried about things like advertising your location in a crisis (or in case your team loses at the tailgate and you are avoiding the guy you made a bet with).

For my test fuel, I had a bucket of yard waste that I saved to simulate the “biomass” that would be available after a storm. Pretty much any storm that is strong enough to take out power and basic services would also result in an abundance of blown down branches, pine cones, and other potential fuel sources. For variety I tossed a few busted-up pieces of warped wooden drink coasters in the bucket as simulated “storm debris”. I even added a few cornstalks and dried weed stalks left from my summer garden for an “other than wood” fuel source to try. In other words – I wasn’t going to be using traditional firewood to fuel this rocket stove test – and that was exactly the point.

Testing was performed on my front stoop (because the snow had melted off of there, but not in the backyard). I was gobsmacked with the results.

With nothing but a few bits of paper, twigs, and cornstalks for fuel, starting the timer from the drop of the match (it only took one), I had a quart of boiling water in 8 minutes! It happened so fast that I didn’t even have time to get to the other simulated debris! I was thinking that 15 minutes would be a decent result, but it took barely half that time! I was so impressed I could hardly speak.

I ran and got another quart of water and dumped it in the dragon pot on top of the boiling water. Without adding any more twigs, just the continued burn down got the additional water to a light simmer before stalling out for lack of more fuel. I was impressed again.

The top of the stove appears to be cast iron and retained heat for quite some time after I removed the dragon pot – while the fire burned to ash. So I was technically incorrect about the “warming yourself” part. The cast iron did give off some radiant heat. I just wouldn’t recommend it for your sole source of bodily warmth.

I let the remaining fuel exhaust itself, then checked the stove to bring it back inside. It took about 30 minutes to completely cool down, and then I shook out the ash. My experiment resulted in less than a half-cup of very fine ash, which I sprinkled over my compost. When you think about the ash debris from an actual campfire – or even a couple of charcoal briquettes – there is absolutely no comparison. I was impressed yet again. I boiled water with nothing but yard debris and was left with a mere handful of powdery fluff as waste. Take that, disposable propane bottles!

Although I bought the specialty Dragon pot (and its performance showed it to be worth every penny), SilverFire says that almost any type of cookware can be used on their Survivor stove. I tried a Lodge cast iron skillet on for size and it fit perfectly.

I’m not going to wait for an emergency to use this stove again. My next weekend off I’m going to see how many twigs it takes to make myself a bacon and egg breakfast!

The Survivor Stove by SilverFire surpassed all of my expectations and is going to stay in regular rotation at my house. Who knew that I could cook and get rid of yard waste all at the same time? I may never buy propane again.