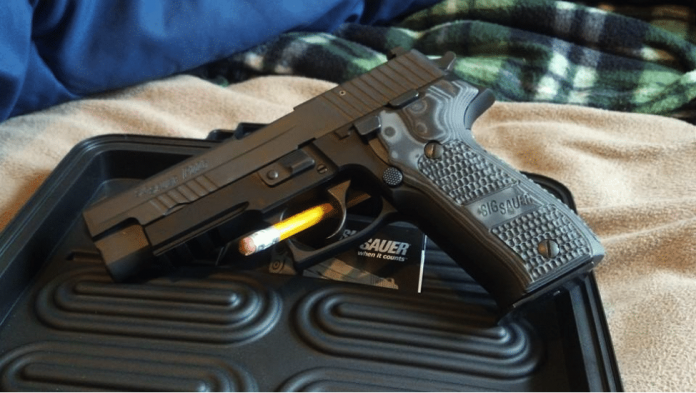 Right on the heels of our P250 review I present… another SIG.

248Shooter writers have discussed, among many topics, just how much Sig Sauer products might dominate review time on the page. This has to do with their very strong showing as a company at SHOT Show, bring a number of new and refined products to market for the huge markets in the US. They covered the entire market base very nicely for both LEO/Military and civilian shooters.

More Sig to come, many other items too, but for now I review this little gem.

This article will be the first in a series of short(er) articles detailing products reviewed over the long haul. The Review Preview will be the first of two parts. Covered will be first impressions, specifications, any initial quirks, and maybe the first experiences after use.

A full review will follow once I feel enough time has been spent with the item to find just how it sits for the long haul of having it around. As this gun was purchased 10 days ago, we are definitely early in the process.

So here we go!

I never actually intended to pick this gun up, and I had only laid eyes on it about two weeks prior in a gun store while looking for a rifle case. I had minimal interest in any Sig Sauer handgun, not that I disliked them. I always took the opportunity to shoot one of a couple P226’s some friends swore by, I also had some eyes open for a P229 Scorpion feeling the need to round out inventory of popular handguns (and loving the FDE color) away from Glocks and M&Ps.

The gun I had on order was an FNS9 (I may still snag that too, we’ll see). But upon swinging into my local shop to see how the order was proceeding I saw the P226 Extreme sitting in the case. The grip coloration caught my eye the most so I asked to see it, knowing for certain that I would still get the more economical FNS9 because what I was really after was another rental gun for classes that I could also review.

We see how that worked out.

I ended up looking around online for information on the “Extreme”, which seems to acknowledge the full cheesiness of the trend of acronym names featuring X’s for firearms these days (XTM being this pistol’s code). I found only one thorough review that wasn’t a run on paragraph on a blog so my time looking was short. Sig Sauer’s own website obviously lists the features in full advertising fashion, but I looked there also… repeatedly… I liked the grips.

So after returning to the shop with a friend to buy an AR15 and hearing that my FNS9 would be very close to the wire on arriving on time I asked if I could instead walk out the store with the P226 Extreme for a slight discount on his tagged price. The store owner agreed in a heartbeat and I left with pistol for $1,000. Yikes!? But I liked the grips

The P226 Extreme is, as Sig states, the 226 that incorporates the most commonly demanded upgrades to the stock P226R’s right from the factory.

Improved grips, night sights, and Sig’s SRT (Short Reset) trigger. Also front end slide serrations, a take it or leave it feature that I happen to love on handguns, the thing I miss most about my M&P45 that my 9L doesn’t have.

The colorfully swirly grips that almost resemble an ice cream flavor are made by Hogue and are of G10 material, a fiberglass plastic laminate formed under pressure.

Hogue calls it G-Mascus G10 for the way the swirls resemble the famous Damascus sword steel (I still think it looks like ice cream). It’s a pattern that emerges from their way of forming G10 instead of the more typical layering method.

The night sights are Sig’s. They’re a factory standard feature on a great many of their handguns and an available upgrade on any that can accept them.

Some say they’re the brightest tritium lamp sights on the market. They certainly are bright, but comparing them to my Trijicon HDs I cannot give a definitive nod one way or the other. Very good sights though. Bravo Sig! Useful features make we gun owners smile.

Now, the Short Reset Trigger (SRT). Not the most eye-catching feature but it is my favorite overall on the handgun. The SRT was Sig’s answer to the complaint of trigger reset distance, not that the P226 stock trigger is unusable or excessive (especially compared to the P250) but I had experienced “short stroking” a Sig trigger in the past, not something I like to do on a handgun. For those who haven’t heard it described with that term I failed to release the trigger enough to reset it for the next shot before pulling it again, since it wasn’t reset nothing happened, I really don’t like it when nothing happens when I pull the trigger on a loaded gun.

The SRT shortens the reset considerable and allows the Extreme (and any other SRT equipped Sig) to be shot very quickly single action. The trigger pull was much lighter at 4.4lbs but the reset was much more reminiscent of my favored M&P’s now than the original, at least to my subjective test of playing around with the trigger. I liked it a lot.

My initial impressions thus formed aesthetically and dry-function tested, I took it to the range two days later for a function test.

True to my purpose but slightly disappointing on a personal level, I didn’t shoot my P226 Extreme first, a student did. A close friend of mine organized a concealed carry for me to instruct and his brother ended up as the one behind the trigger of the P226.

This young man had never fired a handgun in his life.

He left a ragged quarter sized hole in the target at 20 feet.

He was grinning ear to ear and so was I, he was the only one to shoot a perfect score and he’d proven the accuracy of the Extreme to be rather… well… extreme.

I promptly added some rounds down the pipe after the class while we were shooting for fun and confirmed, despite my lack of time behind a P226, I could group as well and often better than my M&P9L.

But that’s ok since this is a Preview.